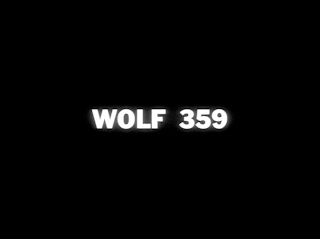 A scientist (O'Neal) creates a miniaturization of a far-off planet in his laboratory. From this little world comes a ghostly creature bent on destruction. Can the brilliant scientist save the world before his nagging wife blows her top?
JS: I can't help but express my profound disappointment that there's nary a submarine to be found in this episode. Did someone miss a memo? Or did they sublet that script to Voyage to the Bottom of the Sea? 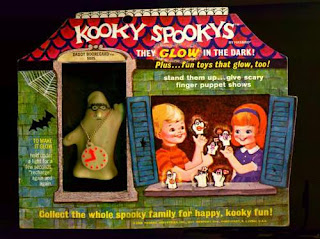 PE: Nice little hand puppet. It'd be a lot creepier if I couldn't see the puppet master's fingernails. And there's not much range to it. He reminds me a lot of the "Kooky Spooky" ghosts I had when I was knee high to a grasshopper.

JS: As if you couldn't figure out the magic behind the puppet, they couldn't help but transition to our whispy pal from a shot of Patrick and Sara's hands. 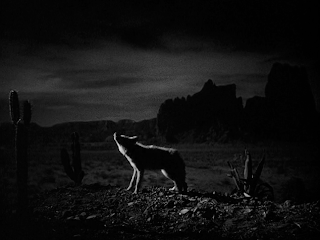 PE: I fully expected to see Ethan Edwards and old Mose Harper to come ridin' up behind that old dawgie howlin' at the moon. Seriously, I've seen some lame stock footage on this show but that  grainy oater shot takes the prize. But I get it, wolves. There weren't near 359 of the varmints though.

JS: I counted. Maybe six or seven, tops. But the beautiful shots of Sara Shane wandering the halls of their dimly lit castle whilst listening to the music of the children of the night... can you say Babe of the Week? 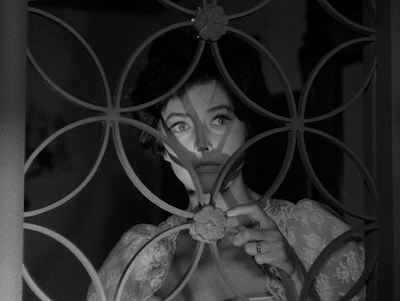 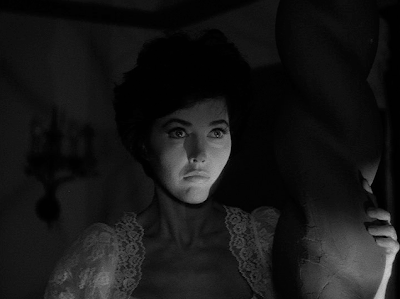 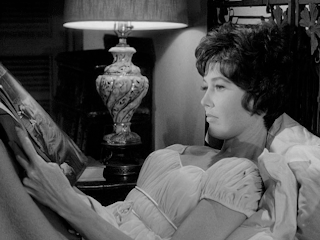 PE: At least this family barbecues outside. But Ethel? What the hell kind of name is Ethel for our bonafide Outer Limits babe of the week, Sara Shane? Trixie maybe. That peekaboo shot of Ethel in bed in her nightie actually made me pay attention to the show for a bit rather than the basketball game I was watching. Do all scientists ignore their babe wives or was it a myth perpetuated on national TV in the early 1960s? Ethel practically runs a flag up the pole (so to speak) and all John can do is mumble about the quality of the steaks and snore (Hey—I, oh, the character. My bad... -JS). I was beginning to wonder if this was one of those Lifetime Network shows where a woman's sexual frustration can take on physical forms. The wolf howling = Ethel not getting what she wants. I get it. I get it. 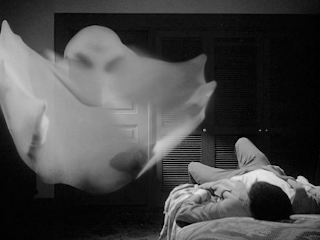 JS: You can't possibly mean that we've got another dyed in the wool scientist too consumed in his work to have a relationship with his wife. Bless his heart, he manages to find time for his bear...

PE: Gotta jump on this score. There are spots when it's just perfect (whenever our sock puppet shows up there's a cue very reminiscent of the main theme from Dark Shadows) but other times when it's unfathomable. During John and Ethel's discussion of his fear we hear...  Spanish guitar? To make things worse, the damned thing's loud at times and threatens to drown out what the couple is talking about.

JS: Yeah, I also thought it was creepy and atmospheric at times, and at an odd moment I actually thought John was reacting to someone on the Chia-planet playing a harp. 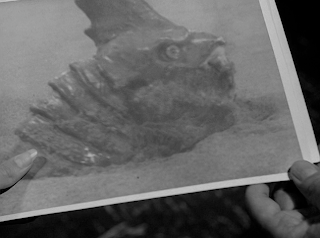 PE: L-OL scene: With Spanish guitar blaring in the background (I almost wanted to see a mariachi crew off to the side of the dining room), John tells Ethel that there are animal lifeforms on  Planet Dundee. When she asks what he means, he shows her a picture of a modified "Invisible Enemy" bear. (Poor bastard was de-toothed! I actually think it would have been cooler if they got a pic of Adam West laying on a rock. -JS). They both then discuss rather calmly the discovery. Ethel could very well be picking out her new dress from a Macy's catalog as much impact it makes on her. Later she sneaks a peek at the mini-world and comes face to glass with the cute little ghostie. Irrationally, she tells John he must destroy it as it's obviously evil (Sand monsters - blah. Casper - bad). Ethel must have gotten a really nasty vibe from our friend though as she tells John:

Ethel: You said you'd been frightened. John, I've been petrified. For a second there, I felt such... pure... evil. That... creature... makes me afraid in a way I've never been afraid before. It's the most awful feeling. All hollow and achey. Like death is near. A kind of death that has no peace. We should run from it just as fast as we can.

JS: So Casper evolves out of the microscopic petri dish Dundee, and when he's out and about, he grows to be almost as big as the planet. Fine, I can accept that. But I still don't get why our footloose and fancy-free friend is whisked away when our BOTW breaks the glass on the science project.

PE: Patrick O'Neal is one of those actors who can make just about anything interesting. This 70s kid grew up on a steady diet of Columbo and O'Neal made a couple of appearances on the classic detective show, including one standout performance as a murderous architect (genre vet Forrest Tucker  as his victim). He's also fondly remembered by TV horror fans as the arachnophobic in Night Gallery's "A Fear of Spiders." Peter Haskell was relatively new to acting (this was only his second role) and would later become the star of Bracken's World.

JS: So to recap—no submarines, and a significant shortage of wolves to make up for the misleading title. All I can say is that I still haven't found what I'm looking for. 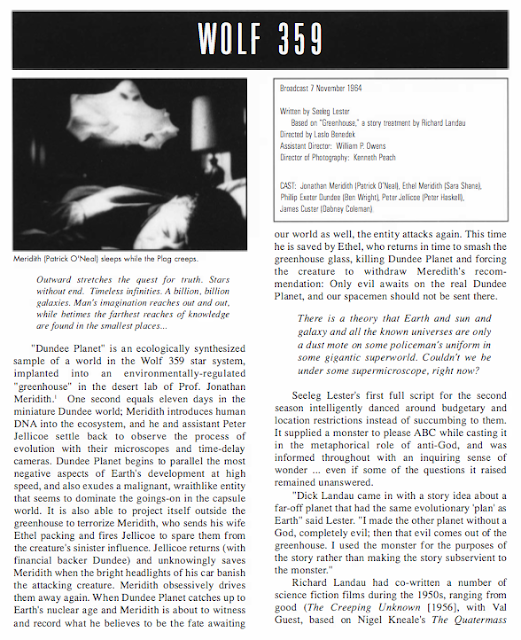 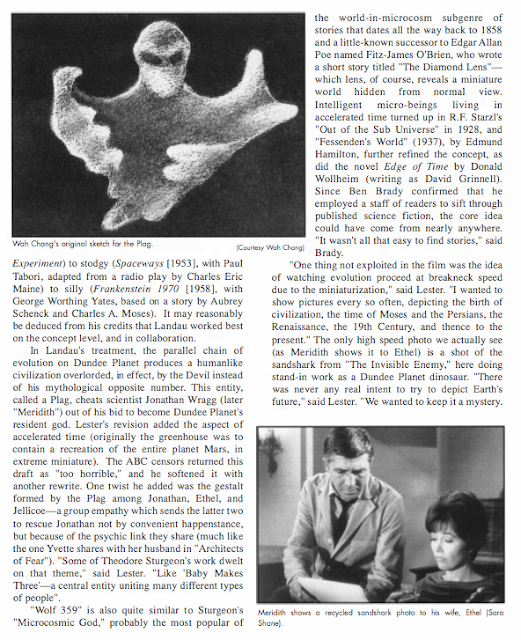 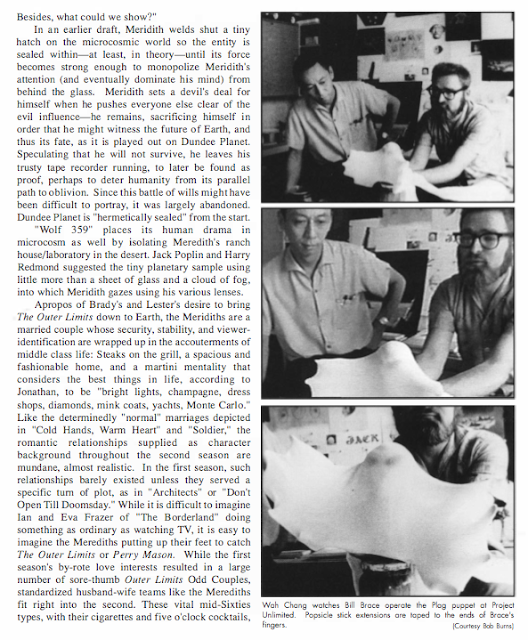 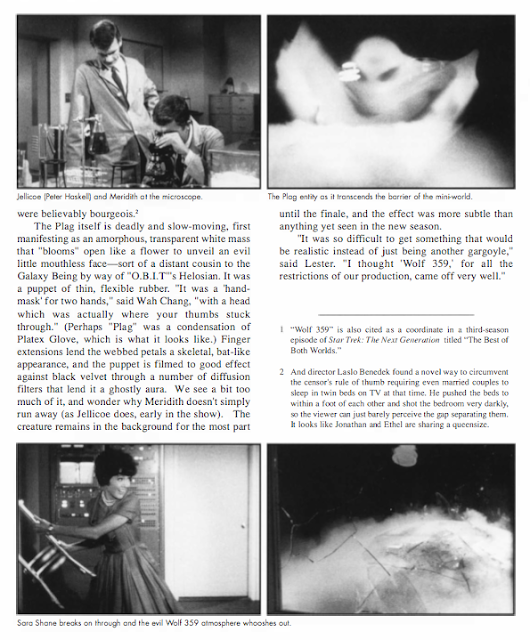 Be sure to check back later today for Gary Gerani's Spotlight on "Wolf 359." 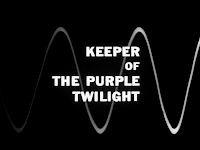