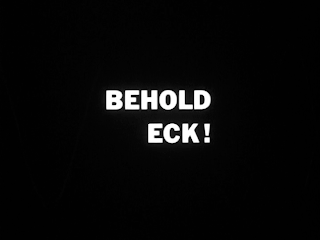 A two-dimensional creature wreaks havoc amid people with bad eyesight as it searches for a way back into its own dimension. Kindly Dr. Stone (Hayes) ignores the dead people piled up like cords of wood in the monster's path and attempts to get him back to his promised land.


JS: Beware of episodes with exclamation points in the title.
PE: I’ll be the first to note that this season isn’t going very well.

JS: I'm beginning to feel like we're sitting on a jury, listening to more convincing testimony every day... and I've heard enough! Can we announce the verdict already! Season 2 is Guilty!
PE: When was the last time you were in a doctor’s office and asked the other patients their names and addresses?

JS: This was the 60s Peter; times weren't so tough for stalkers back then... 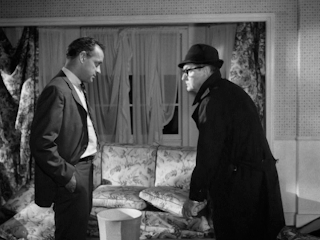 PE: I love when the cops let the doc wander in to the crime scene. Then Lt. Runyan (OL vet Henderson) says “don’t touch the evidence, doctor.” You mean the evidence he’s standing on?

JS: Henderson? I thought that was Orson Welles in one of his unappreciated roles.
PE: I hate to mop my living room floor but I’ve learnt my lesson. I’ll never shoot back my drinks again while watching OL. The still of the bisected skyscraper (cut cleanly in two) on OLTV network news was the dope, but the Eck! cutout was the cherry on top. Genius! Comic genius! 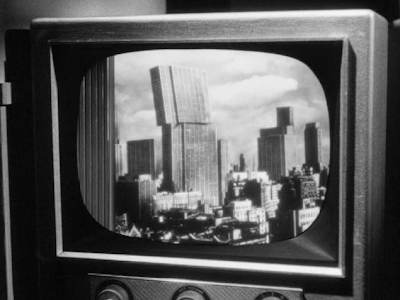 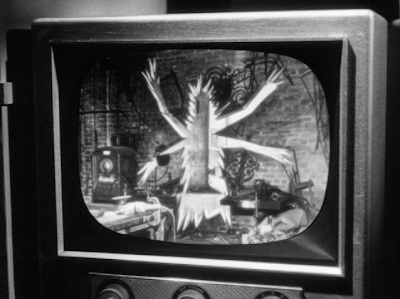 JS: Under different circumstances the sliced building would have made for a very impressive set piece in a disaster movie, but coupled with the cartoon-style silhouette knocked through the wall... well, behold Eck (no exclamation point).


PE: Let’s see: one victim has his glasses ripped off his face by some creature. The cops don’t believe him. A beautiful woman meets a violent death. Her glasses laid out beside her. The third victim has an Eck! stencil on his wall. The police won’t believe his stories of a horrible monster because he was “alleged to have suffered from double vision which he claims was cured by special lenses which he was wearing at the time of the incident.” (as reported by the OLTV news team). Hmmm. I can see why the cops have no clues.
JS: We haven't seen this caliber of police work since Thriller.
PE: So where did Eck! keep the address page he stole from the doc’s book? In his coat pocket? And does Eck! have Mapquest? I know it’s a silly question but if he “just knows” where 1242 Doyle Street is, does he really need the stolen page? I should just relax and watch the rest of the show, I know. They’ll explain it just before the curtain call.

JS: You're underestimating our bear. Clearly he was covering his tracks. 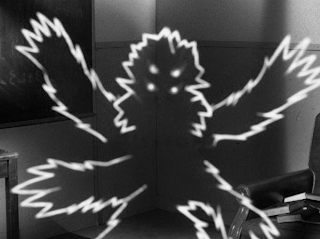 PE: I’m not sure why everyone calls Eck! a hideous creature. There’s not much to him. A six-armed lightning bolt with eyes. Big deal. The way Dr. Stone’s brother, Bernard (Parley Baer) stuffs his hand in his mouth and runs mewling from the lab, you’d think he put on his 3-D glasses and saw Kathy Bates’ hot tub scene in About Schmidt.

JS: It's an interesting looking creature, (Eck, not Kathy Bates) and the effect is reasonably rendered. It's just lacking... something. Dimension, I guess. Frankly, I think he was just looking for a hug.
PE: L-OL scene: After Eck! Tries to join the OLTV news crew, he becomes visible and runs amok across the countryside, causing a horrendous car wreck. Fortunately the driver survives the flaming deathtrap by jumping from the vehicle just before it’s engulfed. Visibly shaken and badly bruised, he’s interviewed  by Lt. Runyan:

Runyan: You say, Mr. Grayson, you jumped clear of the car an instant before it caught fire.

Grayson (looking like he could use another stiff belt): I’m lucky to be alive!

Runyan: Now, this thing…this monster was still there?

Grayson (getting wild Lon Chaney Jr. eyes):  It was there all right. You can be sure of that. Hovering around. Glowing. Shooting off sparks.

Runyan: But it…left… the moment the gas tank exploded. 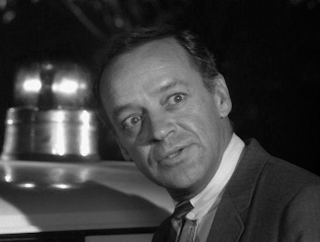 Like a Banshee? Screaming? Could you elaborate perhaps? But the scene gets better! Watch Lt. Runyan’s walk to Bernard. He’s either about to draw on Bernard or he’s incontinent. I had my third Fresca-spurt of the evening when Runyan whirls on Bernard and tells him, eyes agog, that his brother better start cooperating. One thing you can say about these lousy Season Two episodes: there are some entertaining bits here and there. The parts is greater than the sum. 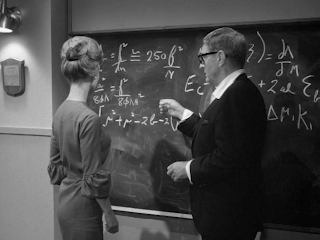 JS: My favorite L-OL bit was when Hayes says, "I've found the key, look! This is the formula for the normal abberational coefficients, right? Now this is the same formula, altered by the sign for Young's aquanautics spheres and corrected for X relative refraction index. In this case a plus three as opposed to a plus one." Of course anyone looking at the equation written on the board can clearly see that it's plus four in that case, not plus three. Duh!


PE: It's a happy ending for Dr. Stone. Looks like he lost a 2-dimensional monster friend but gained a twenty-something squeeze. Why do I suspect that Joe Stefano would have added a postscript to Eck's loving farewell: "I'll never forget either one of you for the help you've given me. When my race comes back to conquer Earth, I'll kill you mercifully!"

JS: If only we viewers were so lucky...
JS RATING: 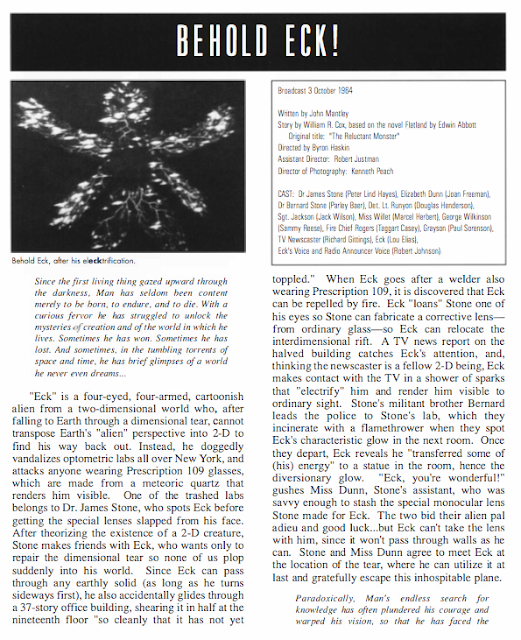 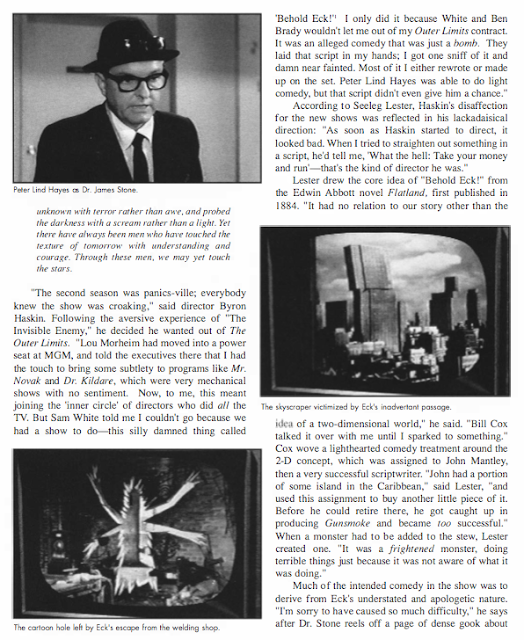 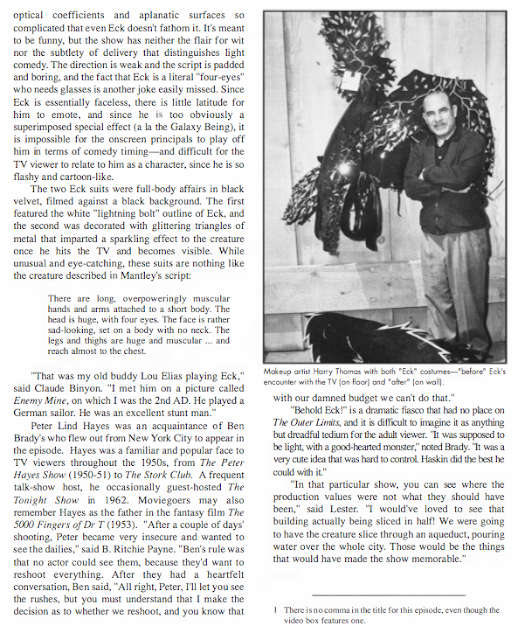 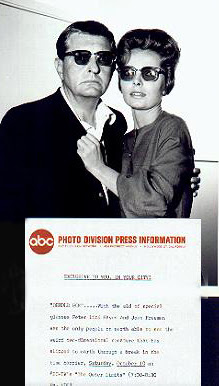 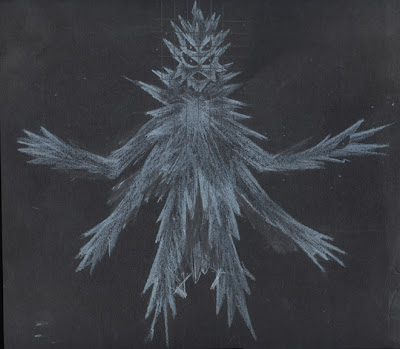 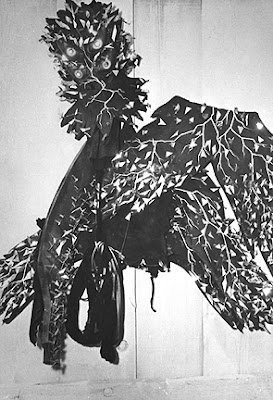 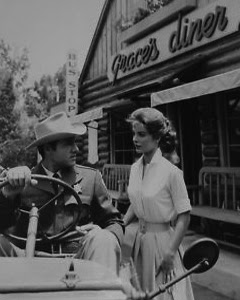 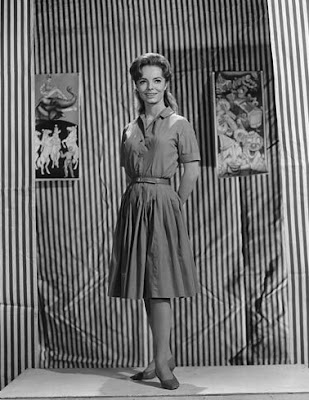 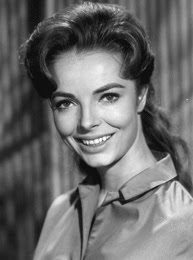 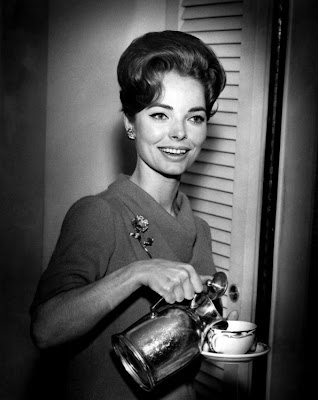