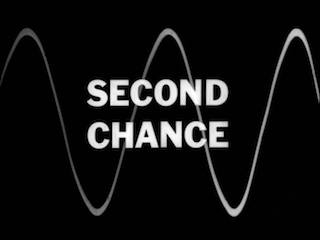 Directed by Paul Stanley; written by Sonya Roberts (credited as Lin Dane) and Lou Morheim. Cast: Simon Oakland (Empyrian); Don Gordon (Dave Crowell); Janet De Gore (Mara Matthews); John McLiam (Arjay Beasley); Angela Clark (Sueann Beasely); Yale Summers (Buddy Lyman), Mimsy Farmer (Donise Ward), Arnold Merritt (Tommy Shadbury). Broadcast March 2, 1964.
Story: Given free passes to an amusement park flying-saucer ride, a hand-picked group of lost souls unwittingly ends up on a real space flight. Their mission is to save the planet Empyria (oh, and the universe) under the guidance one of its bird-like, bloviating inhabitants.
Detractors who regard The Outer Limits as monster-chocked kiddie chow (I'm looking at you, Mom) could do worse than "Second Chance" to back up their estimation. Flying saucers, highfalutin soliloquies, clingly metallic costumes, a preposterous bogeyman, they're all here—precisely where the mooks at ABC wanted them at this point in the show's run.

But beneath the feathers and speechifying and silver lame there's a genuine OL sensibility at work in "Second Chance." True, it flirts with and finally succumbs to tiresome comic-book grandiosity, but it also consciously, intriguingly engages and interrogates the distinction between childish fantasy and adult reality. And for a portion of its running time, anyway, it makes a pretty good case that the line is blurrier than anyone cares to admit.

With this in mind its amusement park setting works not just as bait for OL naysayers but thematically as well. It's a contrivance that there are so many unhappy adults in the park for the Empyrian to choose from (and no kids, apparently), but it doesn't detract from his point—which he pompously makes at every opportunity—that the longing for flights of fantasy and their sedative effects is an intrinsically human one. (If his argument doesn't move you, just substitute a dive bar or crack house for Joyland in your head next time you watch the episode.) The wooded park locale in the episode's early scenes is also a sunny, open contrast to the claustrophobia of its set-bound second half, and the juxtaposition it provides with the inky, blatantly modernistic Empyrian has a real capacity to shock. 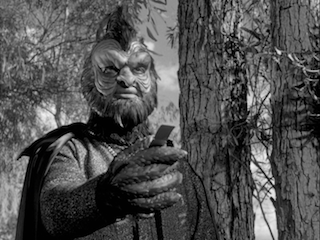 I know this particular bear takes a beating from fans, and its avian qualities can be distracting and laughable. (The costume was resurrected to middling effect in the second season's "The Duplicate Man" and infamously repurposed as a dodo bird in a late episode of Bewitched.) But Kenneth Peach and Lloyd Garnell knock themselves out subverting its birdiness, and their efforts—to say nothing of Project Unlimited's realization of Wah Chang's conception, and somebody's wise decision to ditch its beak—pay off. The Empyrian never looks exactly the same in any two shots, and it's hard to take your eyes off him. Hell, he even looks scary in broad daylight. 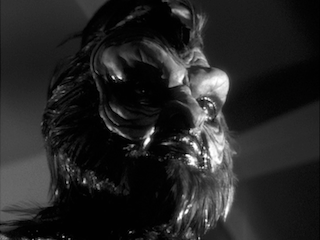 First-time OL director Paul Stanley, whom DJS notes was a veteran of Leslie Stevens's earlier Stoney Burke, is a natural at this sort of visual nuance. He uses the cramped saucer-interior set particularly well, and keeps the long shots showcasing its two levels to a minimum; in those, it looks so much like a proscenium arch that we're reminded of how stagy the episode is once its No Exit setup is put into place.

Stanley coaxes careful performances from his cast, too, which is no small feat considering the sloggy expository monologues they're required to spout. The teleplay, disowned by screenwriter Sonya Roberts because of story editor Lou Morheim's changes, only truly comes alive in its ensemble set pieces; the banter between the Empyrian and his panicked passengers right after take-off is particularly sharp, and everybody plays it to the hilt.

Simon Oakland gives a dignified, menacing stillness and grace to the alien and is frankly mesmerizing throughout, while Don Gordon keeps a sense of humor about his role as a slumming nuclear physicist without condescending to the material. Stage and screen vet John McLiam makes simpering blowhard Ajay Beasley, who's always ready to make a good time bad and a bad time worse, both pitiful and loathsome at once, and even Mimsy Farmer transcends her character's screaming-mimi persona and conveys convincing terror and outrage at her predicament. She's also smoking hot. 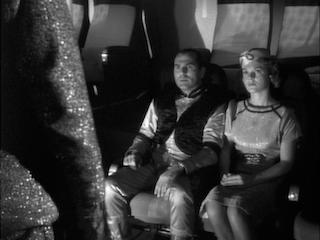 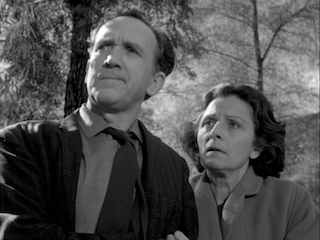 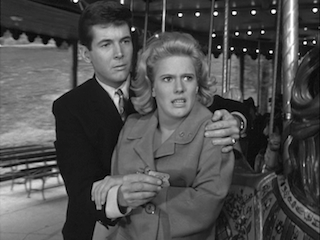 I'd remembered "Second Chance" as a stilted, silly episode more to be endured than enjoyed, so all this came as a happy surprise when I rewatched it. Too bad it loses the courage of its conviction in the last act, when it switches abruptly from the motif of reality as a manmade construct that's dreamed and pretended and talked into existence (and routinely fled) rather than divinely bestowed, to the mawkish, "we shall overcome" hominid boosterism that gives the episode its title.

The thread that bridges these two modes is, I suppose, the notion that the abductees' refusal to leave Earth or at least be kidnapped from it is a way in which our need for make-believe serves a valuable purpose. There's something dark and complexly Stefanoesque underlying the pat optimism of this idea, but it goes undeveloped and the episode's existentialism is simply left dangling.

That's too bad, but clarifying this aspect of "Second Chance" probably wouldn't have bumped it into The Outer Limits' top tier anyway. The episode is never dull, though, and the fact that it's also more or less kiddie fare isn't entirely a black mark against it, either. For one thing I remember it vividly from when I was a sprog back in '64, so it clearly helped put the OL hook in me that has yet to be dislodged. For another, it triggered a nightmare I have about an Empyrian-like being lurking around a wooded parkland that recurs to this day. So whatever its defects, I can't say "Second Chance" isn't memorable. 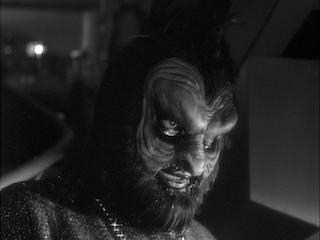