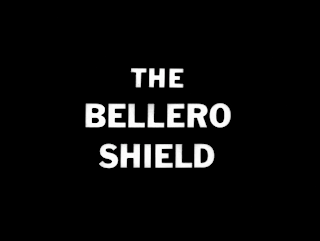 Richard Bellero, Jr.'s (Landau) latest laser invention does not impress his boss (and father) (Hamilton) When he manages to reel in an alien (John Hoyt) with an impressive defense mechanism, his wife (Kellerman) thinks they can use that technology to gain control of her in-law's company, once and for all.
JS: Did the OL prop department get a new box of  knobs and dials just in time for this episode? Sure looks like it to me!
PE: By this time, I think the knobs behind the scenes would throw the box of gizmos in the air and see how they'd land. I'd love to see a new blog "Outer Limits: The Knobs Explored" discuss and examine each new lever and doodad. Several of the gauges have followed the "Spinal Tap" theory that there is a measure above 10. Gotta love those spinning dials! 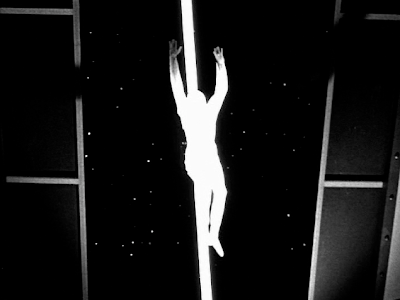 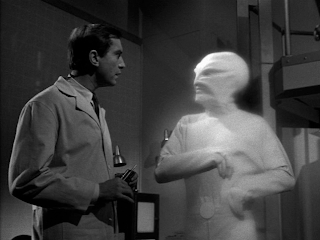 JS: The poor bear, in his cheap white track suit, leaves much to be desired. I guess paying for all the new dials came at the bear's expense. From his initial arrival, sliding down the laser beam, I found it hard to take him seriously. Fortunately, his was the only performance that I felt detracts from the story.

PE: Really? I thought, yep, the suit was a cheapy but John Hoyt (Is that really John Hoyt from "Don't Open Till Doomsday" under that mask?) sold the alien for me.  I think you objected to the Elvis belt buckle. And do I detect a not-so-subtle reference to Christ in that trip down the dancer's pole?

JS: Martin Landau does a fine job as the young, excited scientist. He is well supported by Neil "The Commissioner" Hamilton, as his unimpressed father, who fortunately doesn't have to resort to an "Invisibles" moment this time out.

PE: Gotta disagree here though. Landau almost gets lost in this one and when he does surface I don't see the "Star in the making" turn we got in "The Man Who Was Never Born," but the Landau who would phone it in now and then in supporting roles. 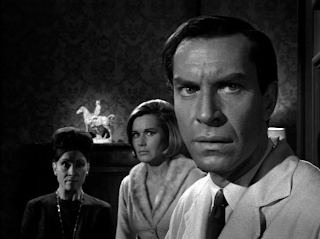 JS: The real scene stealers are Sally Kellerman and Chita Rivera. They are a dynamite, if bizarre, pairing. I never knew what to expect next from each of their clandestine encounters, and was honestly shocked when Rivera pulled the gun out of her garter. Talk about noir!

PE: Kellerman, at times, seems a bit high. That could be attributed to the dialogue Stefano gives her to memorize. Her motives are shady at times. Is she wanting fame and fortune? At one point, Landau tells her he can only give her money. With most of these TV broads, that would be enough, right? So what does she want? Landau on the cover of Time? A talk show gig? I get that she wants her husband to be Top Cat but is that the final goal?
JS: Director Brahm had Conrad Hall firing on all cylinders this time out. I could have pulled dozens of screencaps from this episode to highlight the amazing lighting at play. He literally brings shadows to life. While not my favorite episode overall, I think this may have some of the most impressive photography to date. 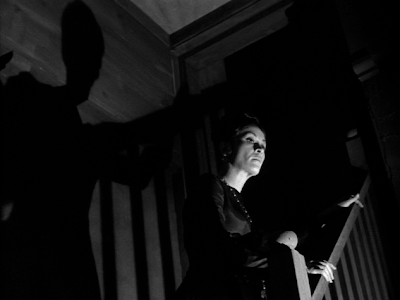 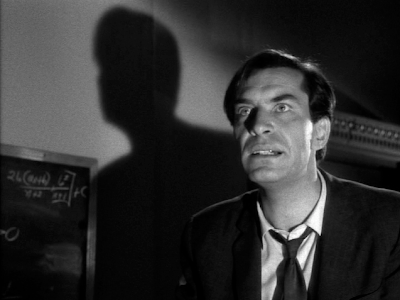 PE: Yep, very impressive. And because I know nothing about lighting and special effects (as I've been told countless times these past few weeks), I'll mention my admiration for the "glowy unfocused alien" trick as well. In any scene our friend is featured, he glows a fuzzy bright white. In all that black and white, it's still a startling effect.

JS: I'm not a big fan of the vaseline smeared lens... particularly when other characters get inadvertently blurred as a result. My L-OL moment was when the mannequin is dropped from the ceiling after Kellerman shoots the alien.

PE: It's a scientific fact that when aliens from "just above the ceiling of our universe" are shot, their bodies lose their bone structure and they become rubbery. Read your Outer Space Weekly a little more often. We're being graded on this.

JS: I'd be okay with a rubbery alien... but this one  was stiff and inarticulate. The only thing missing was the sound of the brittle guy shattering when he hit the ground.
JS RATING: 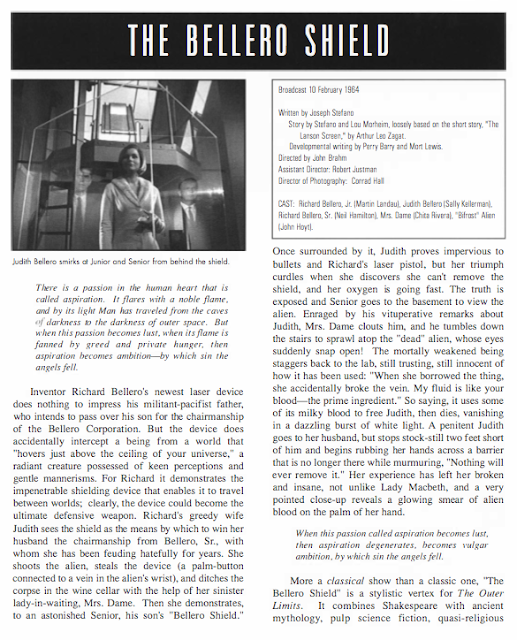 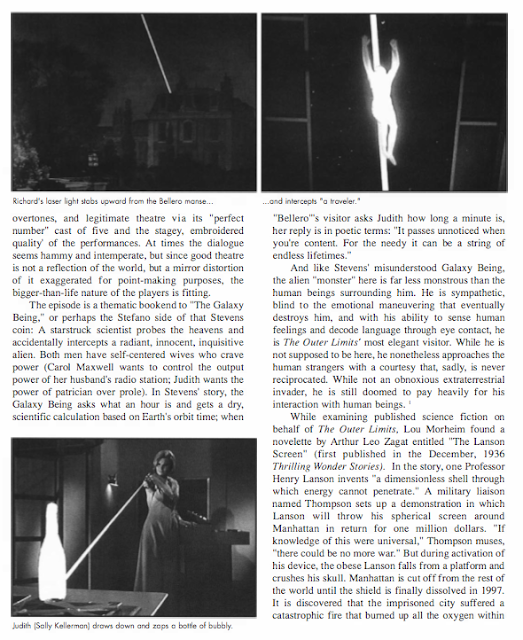 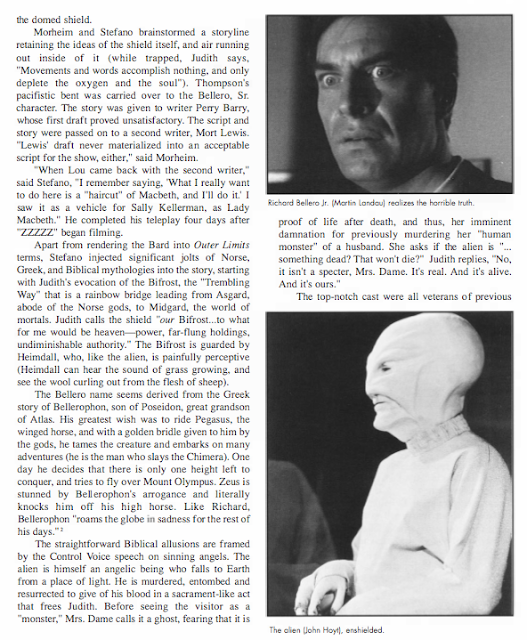 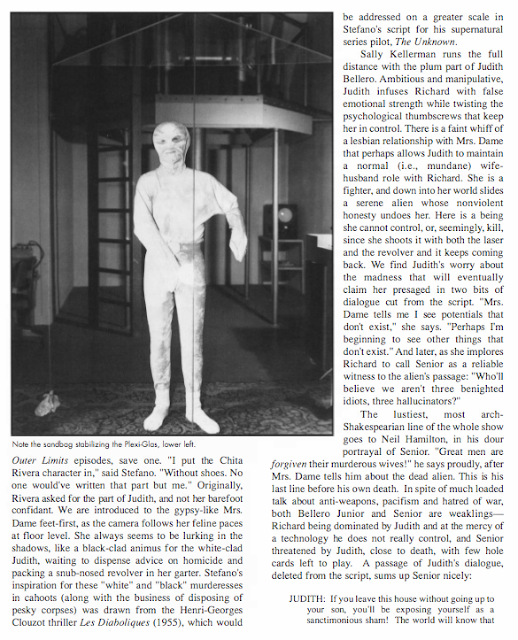 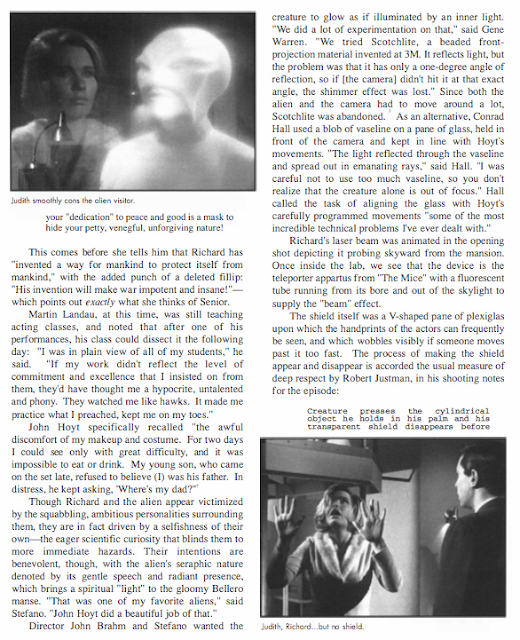 As David J. Schow explains below, there was an overlap in the production of the final episodes of Season One. Watch for our review of The Unknown/"The Forms of Things Unknown" as our final Season One entry. 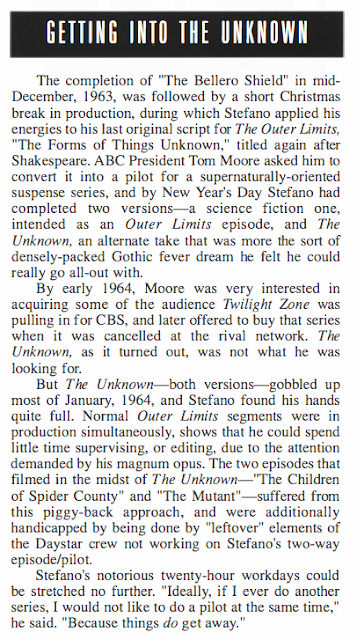 
Be sure to check back later today for Christa Faust's Spotlight on "The Bellero Shield."