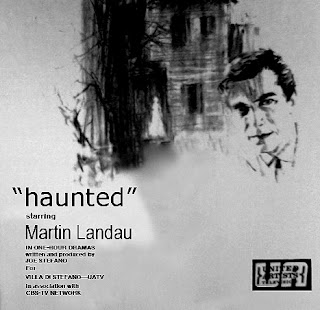 If ever there was a “lost” Outer Limits episode, or a Holy Grail for the series, it is the film variously known as The Haunted and/or The Ghost of Sierra de Cobre.
In the Companion, I erroneously listed the film as “in color” (it’s not) and assumed they were one and the same entity.
Joe Stefano told me the story of how he once possessed two prints of this pilot, loaned them out the someone at CBS… and never got them back.
Throughout the 1970s-80s, The Ghost of Sierra de Cobre popped up unheralded on TV in Canada, Australia, and as far away as Thailand.  Many people remember seeing it on TV without even recalling the title.
Somehow, by 2007, a Japanese film critic named Chise Soeno turned up with a 16mm print of The Haunted, which she has screened annually at the Kanazawa Film Festival in Kobe and Hokuriku, Japan.  TV-Asahi in Japan had also broadcast the film in the late 1960s.
Even more unbelievably, while we were all sleeping, a collector scored ANOTHER 16mm print of The Haunted from eBay in 2010 … FOR NINETY BUCKS.
By 2007, the Film Archive at UCLA had also acquired a copy.
Recently, under circumstances too mysterious to get into here, I was offered a private screening of The Ghost of Sierra de Cobre — most likely the “foreign title” of The Haunted.  At least it was a chance to view the material again on a larger screen in a darkened room, as opposed to a film carrel at UCLA.
Wrong.
I should have figured this out based on what happened to The Unknown, but for lack of evidence staring me right in the face.  I should have known the moment Joe Stefano told me “it was released everywhere but in America as a feature.”
The Ghost of Sierra de Cobre is the FEATURE VERSION of The Haunted.
Ghost is 20 minutes longer, contains scenes and characters not included in The Haunted, and has a completely different ending.
While Ghost screened, it took about fifteen minutes for this to sink in:  Hey, wait a moment…!
But I wasn’t just watching the “Ghost cut.”
I suddenly realized I was watching the vault elements FROM which Ghost was assembled.  Eight reels, largely unsweetened for audio, with temp dubs that came and went, very rough cutting, and ADR for Diane Baker I could swear is Sally Kellerman’s voice.  In several car scenes, you could still hear Connie Hall’s camera running.  THIS, then, was the material Stefano and Tony Di Marco took into the cutting rooms for the marathon whittling session recounted in the Companion text.
So — a THIRD iteration.
And nobody can figure out who owns the rights to it.  The Haunted was never broadcast.  CBS theoretically held the copyright, but as of 1993, it was never renewed.  Ditto for The Ghost of Sierra de Cobre.  For all we know, the material might be public domain by now.
The investigation continues… inquiries are being made… but for now, the February 25th double bill of The Unknown and The Haunted — from pristine print sources, by the way, not a lame digital projection — is an ultra-rare chance for the true Outer Limits devotee to catch a look at The Haunted, whereas the almost-equally-rarely-seen The Unknown leaked onto the gray market years ago.  For this, we have to thank Mark Quigley of the UCLA Film Archive and the Bill Wilder Theater at UCLA.  The choice is yours!

THE HAUNTED
(a.k.a. The Ghost of Sierra de Cobre)
(1965) Directed by Joseph Stefano

Martin Landau stars as a Los Angeles-based architect-cum-paranormal investigator who specializes in assessing and exorcising old homes. Stefano here weaves together vengeance, hallucinogens and a “bleeding ghost” in a gothic telefilm that was deemed too frightening to air by network executives. Stefano's only directorial effort, this extremely rare pilot never aired in the U.S.

THE UNKNOWN
(1964) Directed by Gerd Oswald

With nods to Psycho and Clouzot’s Diabolique, The Unknown unleashes sadism and madness when a wealthy playboy lures two unsuspecting women into a house of horrors. With its nightmarish tone and art-film cinematography, The Unknown pilot was considered too off-beat by ABC and was retooled as an episode of Outer Limits. The original pilot is being screened tonight from a rare 35mm print. 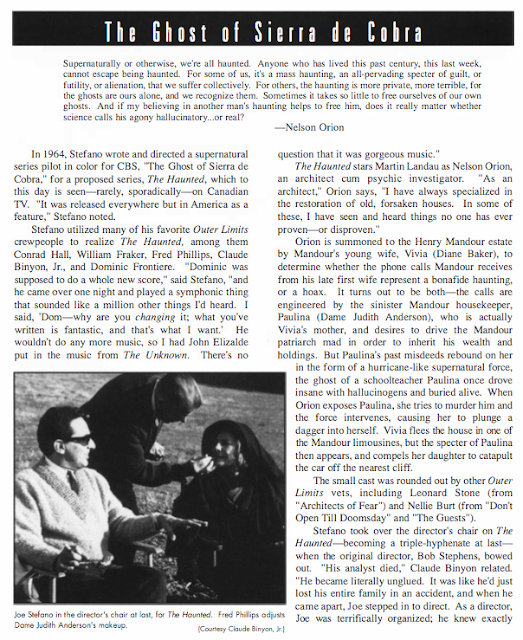 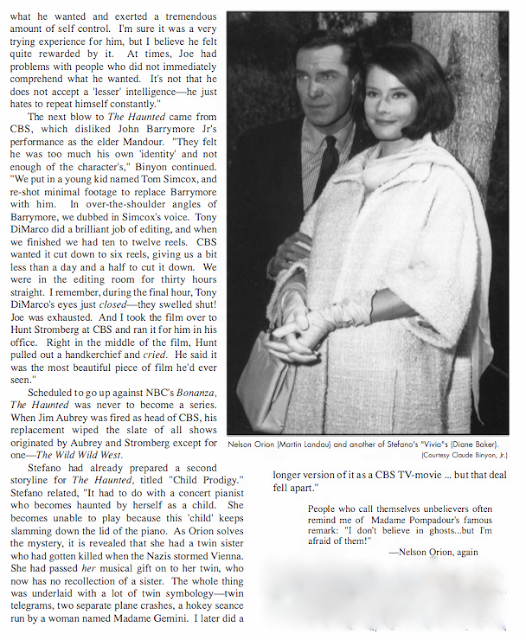 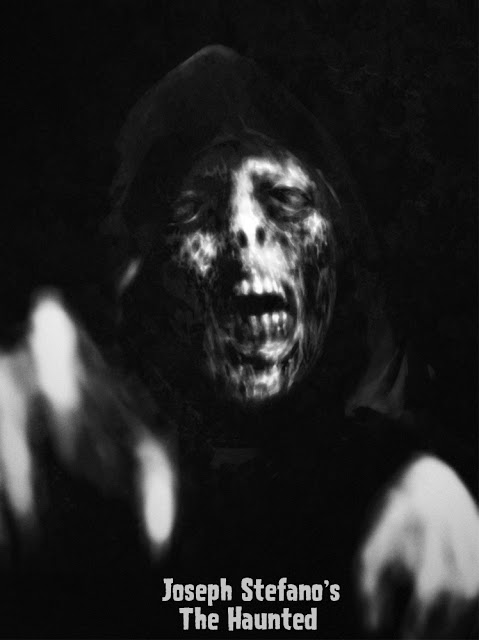 Don’t Answer, Because You Also Get —!
Surely as Leslie Stevens retrofitted Please Stand By as “The Galaxy Being” and Joe Stefano rejiggered The Unknown into “Forms,” for the longest time there was another “lost” analogue to The Haunted/Ghost, and it was Daystar’s final and most infamous production — Incubus.
Yeah:  The one with Shatner.  The one in Esperanto.  Seriously.  Read all about how the only existing print was rediscovered in 1996 … and how it took four years to get it to DVD. 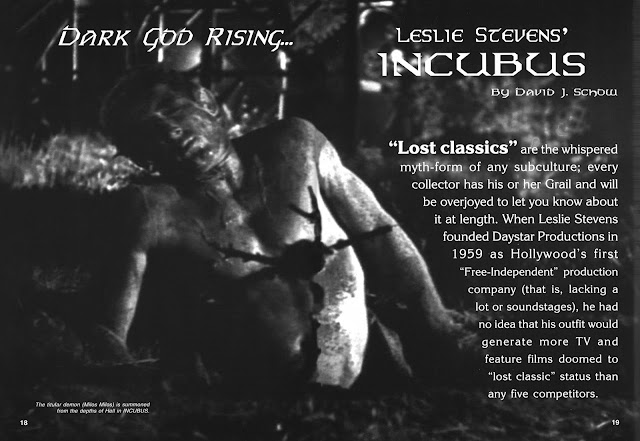 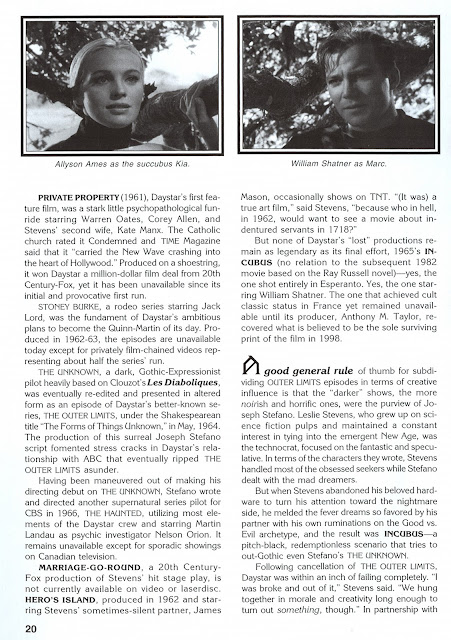 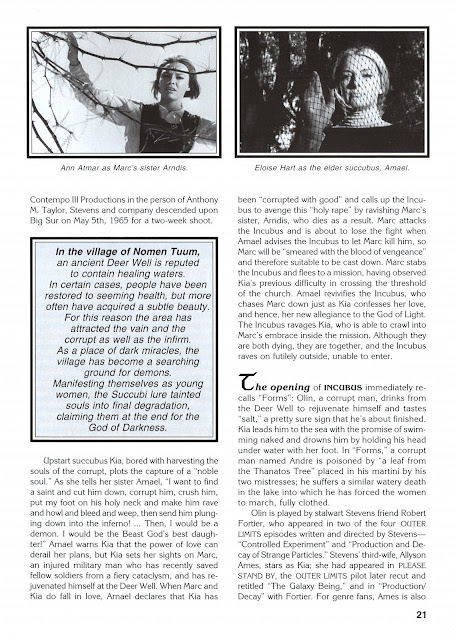 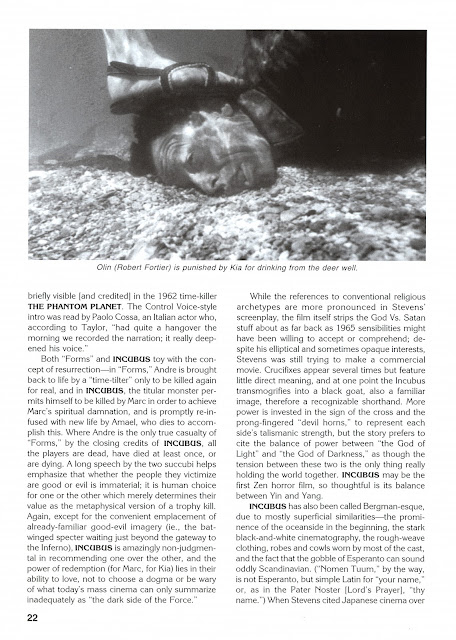 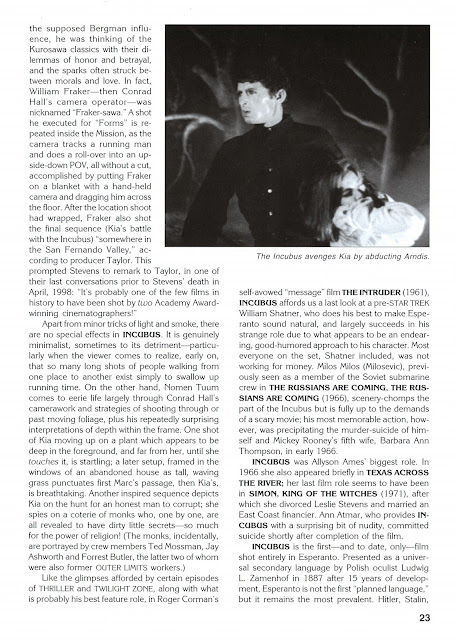 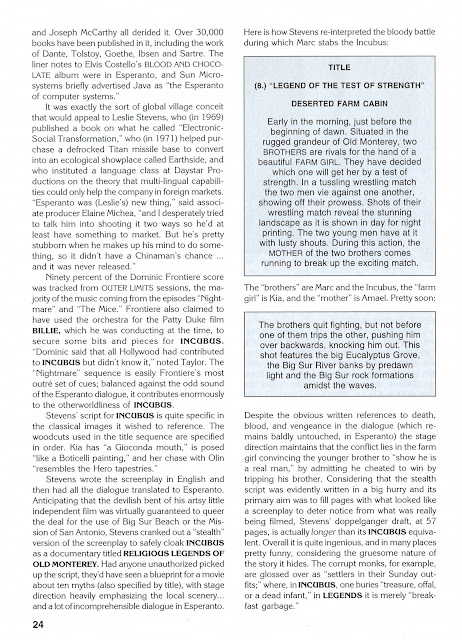 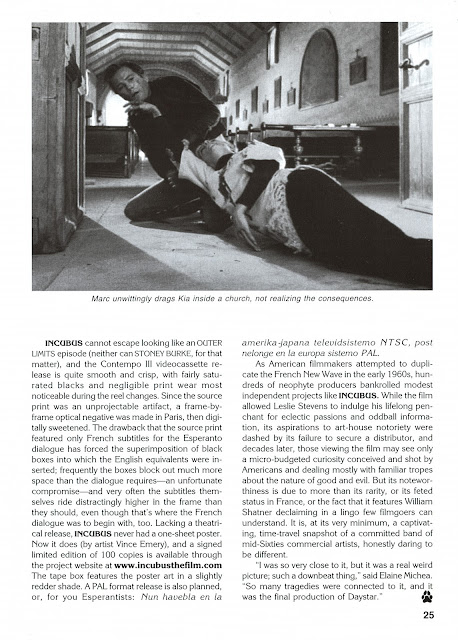 Copyright © David J. Schow, 1999.  All Rights Reserved.  Used by permission and by special arrangement with Tim Lucas and Video Watchdog. 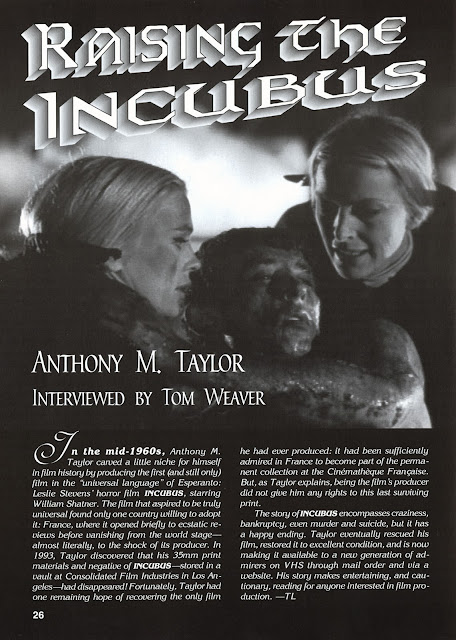 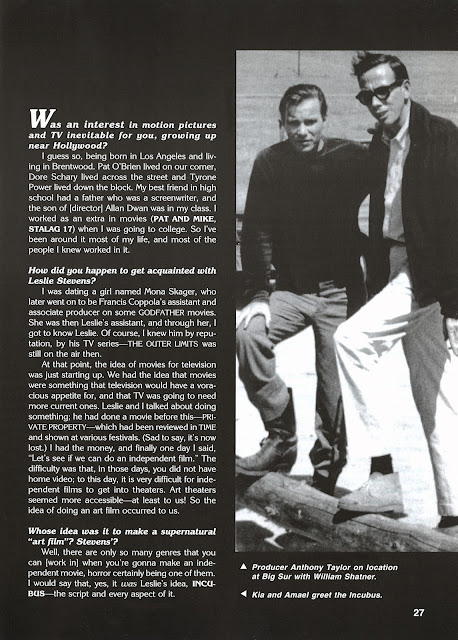 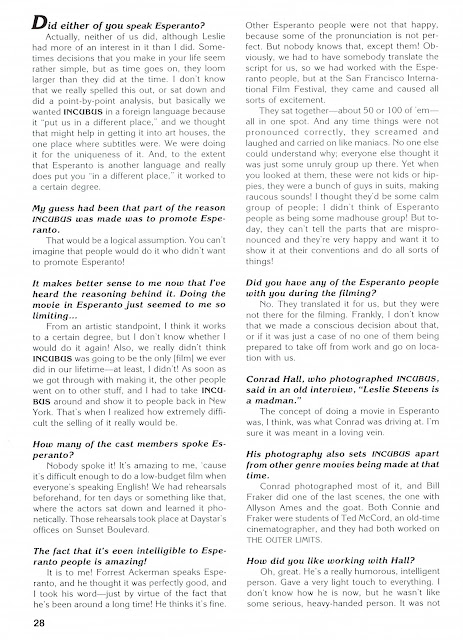 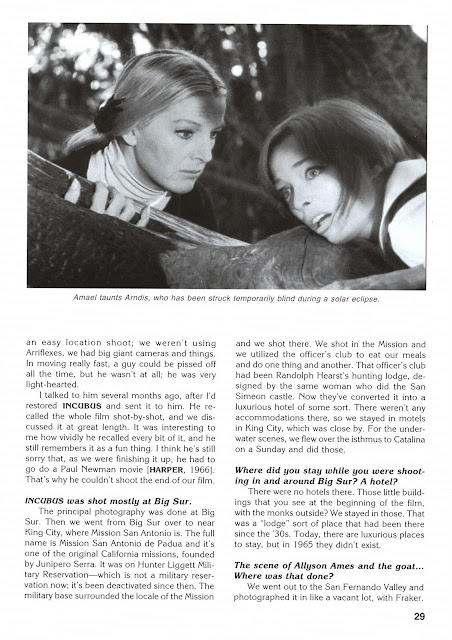 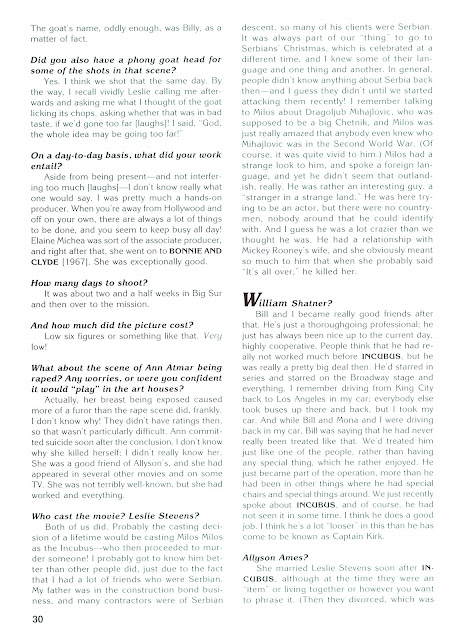 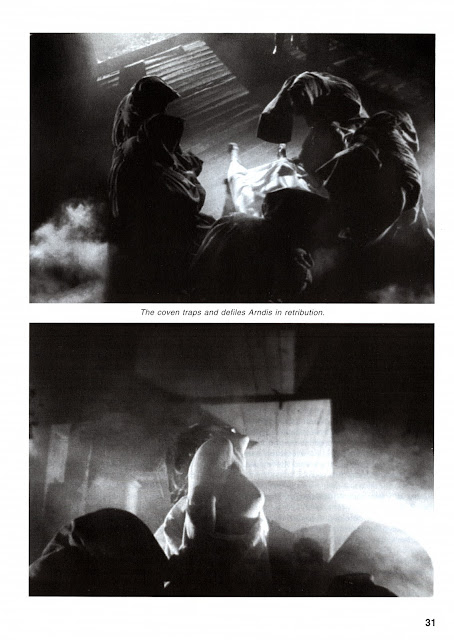 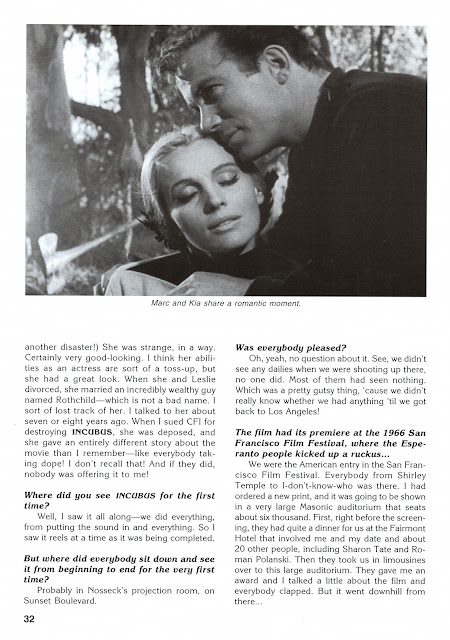 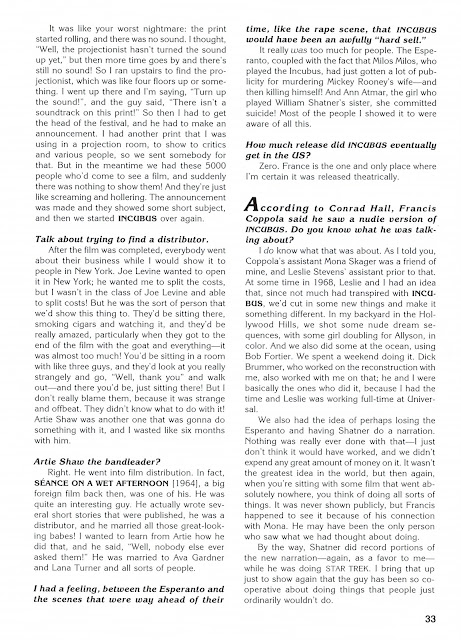 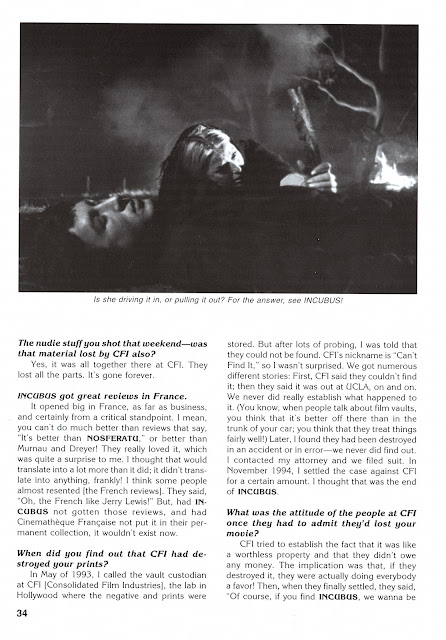 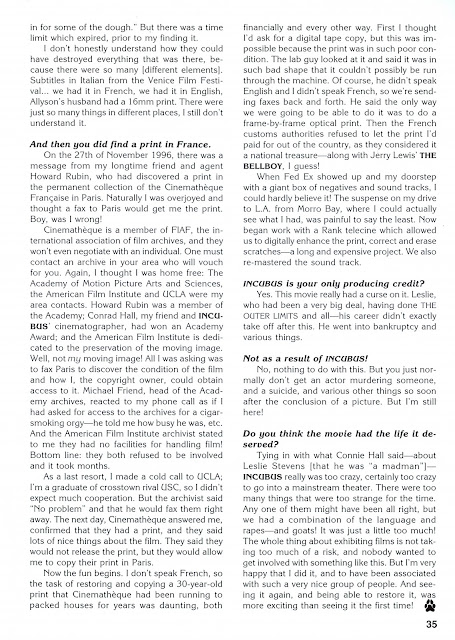 Copyright © Tom Weaver, 1999.  All Rights Reserved.  Used by permission and by special arrangement with Tim Lucas and Video Watchdog. 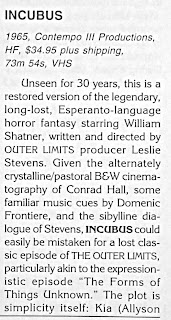 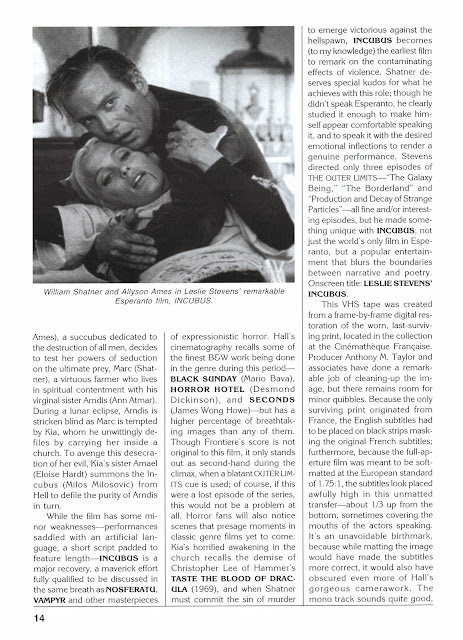 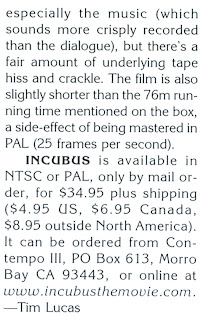 Copyright © Tim Lucas, 1999.  All Rights Reserved.  Used by permission and by special arrangement with Tim Lucas and Video Watchdog.
ENDNOTE:  Thanks to Warren Oates biographer Susan Compo, I was alerted to the presence of Private Property in the UCLA Archive collection, where it can currently be viewed by appointment.  Another Stevens pilot, Fanfare for a Death Scene (1964 — also shot by Conrad Hall), unexpectedly appeared as a streaming download from Netflix just this past month.  The Unknown and Please Stand By remain available as gray market copies.  Stoney Burke is still largely MIA except for the stray VHS copy.
— DJS
Posted by John Scoleri at 6:21 AM