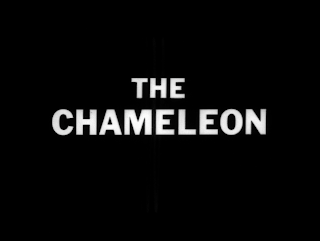 When a pair of aliens crash land in California, the government decides to infiltrate the ship by turning an assassin (Robert Duvall) into one of the aliens. When will we learn...
PE: I like that we're plopped right down in the middle of this story. The aliens have been on Earth long enough to have wiped out some unfortunate soldiers. Having said that... the powers-that-be leave all the observation to one General? Was this U.S. Army on the same budget as Daystar? 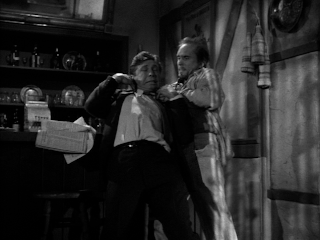 JS: Robert Duvall goes through quite a transformation in this episode—and I'm not just talking about when he becomes an alien. Remind me never to sit next to the guy in the bar fondling a fly-swatter. I thought it was very cool to have Mace not only console the guitarist whose instrument was damaged, but the smooth fashion in which he slid the money for that right into the guys pocket (I believe it was his G-String, actually. -PE).  A true patron of the arts.
PE: This has the same general framework as "Architects of Fear" in that a man is transformed into an alien to save the human race. "Chameleon" isn't as strong an entry as "Architects" but, much like that earlier show, it benefits from a powerhouse performance by its lead actor. 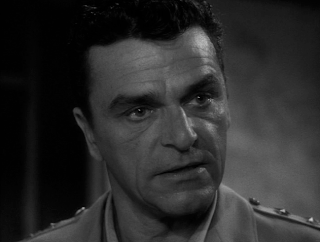 JS: I was pleased to see tough guy Henry Brandon as General Crawford. I'm sure he is beloved to many of our readers for his extensive body of work, so forgive me for knowing and appreciating him from his brief appearance in John Carpenter's Assault on Precinct 13.

PE: While most folks would automatically link Robert Duvall to The Godfather I and II, Apocalypse Now, Lonesome Dove, Tender Mercies (which he won his Oscar for), or any of the other strong performances he's given us in the last forty years or so, I like to think of the actor in his early stages: as Bart Collins, the insane "Bad Actor" on Alfred Hitchcock Presents, his several appearances on the classic cop show, Naked City (in particular, his turn as a slightly high-strung adult orphan in "The One Marked Hot Gives Cold"), and in "Miniature" from The Twilight Zone. It's easy, fifty years and six Oscar nominations later, to say this was a legendary actor in the making, but you really can see the foundation being poured here. Duvall will pop back up in the second season two-parter, "The Inheritors."
JS: I have to admit, the science of using the alien DNA to convert our protagonist to the fold was a bit of a stretch. You think that if science had the ability to update DNA on a whim, they might be more focused on using that to the betterment of the human race. Of course, they have that technology, and yet they somehow think they can fool the aliens by slipping another one into their spaceship.

PE: "Changing the human structure" to resemble aliens is one thing. The real hard to swallow pill is the "cover story." So we're to believe that Moe and Larry (the real aliens) will accept that Curly Joe landed here on Earth decades before. Leon Chambers (Caine, better known to us TV addicts as Major Hochstetter on Hogan's Heroes) owns up that "they may not buy it, but they may be damn stupid enough to think about it long enough for you to accomplish your mission." Hell, the army guys are smart enough to come up with a replica of the aliens' outfits. I know it would make the episode quite a bit shorter (and, ostensibly, less suspenseful) but why not dress Duvall up as a female alien, draw them out of the ship, and blast them both? It's a moot point, of course, when Mace shows up and Moe and Larry take one look and bust out laughing. There goes the espionage. 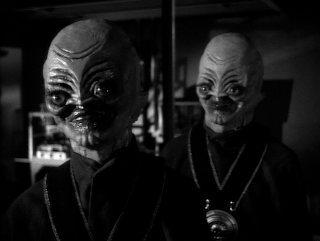 JS: Interesting thing about these aliens. On the surface, they appear to have several things against them. They're dressed in street clothes. The mask over their eyes is not articulated. They speak in decidedly American accents. So why does it work? As they are clearly a more advanced race, and bipedal humanoid creatures, their uniform dress seems somehow appropriate. And the brilliance of these masks is that they leave the actors mouth free for expression. Somehow, the combination of the two works. And the evocative eyes don't have an artificial rubber mask look (see "Fun and Games"). So even though they don't blink, the fine performance by William O'Connell makes it easy to forget that the actors eyes are actually somewhere behind the mask's forehead.

PE: Yeah, you can tell they're rubber masks (especially around the mouth) but the head gear is classically creepy. I'd have traded up though when Projects Limited brought me the ray gun that shoots smoke. Not very impressive. 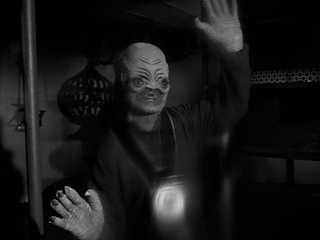 JS: Duvall seems less comfortable in the alien make-up, but God bless him for suiting up in the first place. It still brings a smile to my face to think that this is Tom Hagen stuck in an alien force field while sporting the latest Empyrian bling! Let's see the jazz hands, Bobby!

PE: Actually, the future Duvall character I saw glimpses of here was sleazy TV executive Frank Hackett in Network (especially in our first glimpses of cleaned-up Mace). He's got a calm demeanor but we know a sadistic side is right around the corner at any moment. A classic OL scene is where Mace explains to his boss that he's not performing this task out of the good of his heart but because he's a killing tool. Again, there's that cool, reasoned exterior that hides the psycho just below the surface. It's a great speech and Duvall delivers it perfectly. 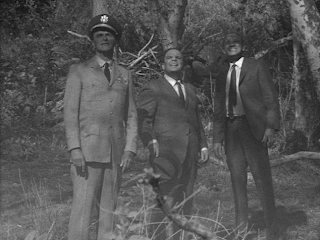 JS: I love how the three government goons stand there and watch the ship take off. Do you have to go to astronaut school to know that the safe distance starts a couple miles from the launchpad?

PE: Of course, our teleplay is written by Robert Towne, another of the seemingly endless Roger Corman protoges who grew up to make good. In this case, writing such classics as The Last Detail, Shampoo, Chinatown (Oscar winner), and The Yakuza. Of course he was also responsible for the first two Mission Impossible flicks and Days of Thunder (which reunited him with Duvall). A very early credit is the screenplay for the Corman/Poe/Price Tomb of Ligeia.
JS RATING:

David J. Schow on "The Chameleon": 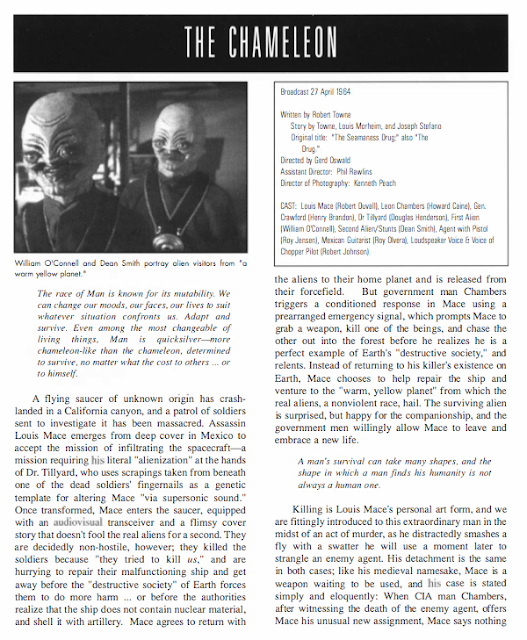 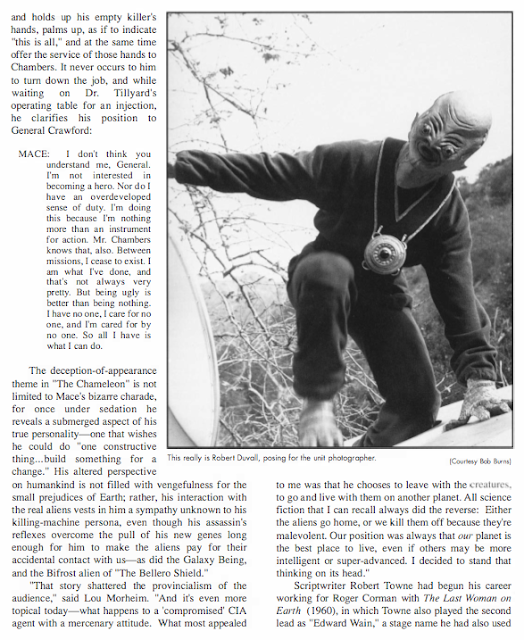 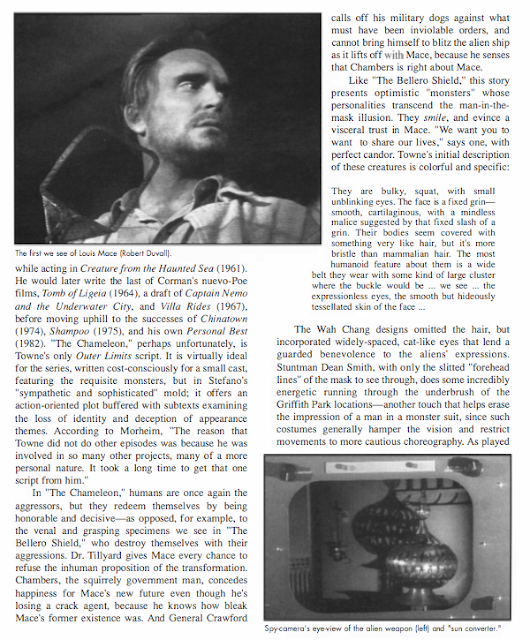 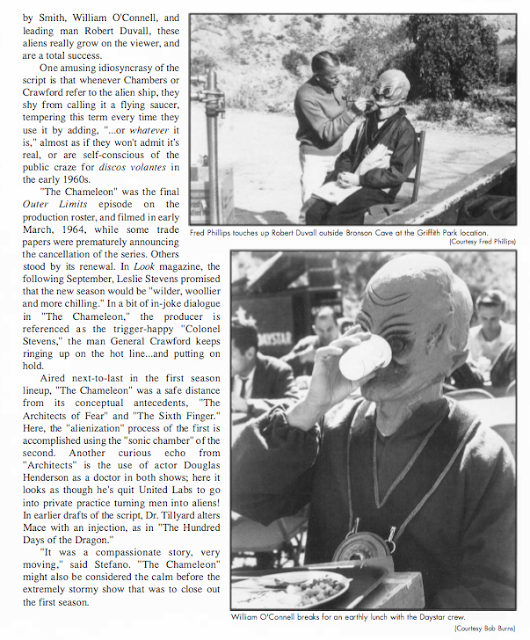 
WAH CHANG BLOWOUT!
That's right, it's all-Wah, all the time, and if you'd like to glimpse a couple of fantastic Project Unlimited shots, scoot your eager buns to:

Go wild for Wah!  You'll be glad you did!

Two aliens crash land in Cali
Causing government agents to rally
A quick DNA update
Got Lou Mace to mutate
Now the aliens have got a new pally!


Be sure to check back later today for Mark Holcomb's Spotlight on "The Chameleon." 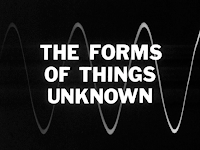