Spotlight on "The Bellero Shield"


By Which Sin the Angels Fell: Ambitious Broads, Film Noir and “The Bellero Shield”
“The Bellero Shield” has always been one of my favorite Outer Limits episodes. And not just because it's the only episode with an overt foot fetish.
Pussywhipped scientist Dr. Bellero (Martin Landau) accidentally transports an alien being down to Earth on a beam of light, a classic example of whimsical, poetic and utterly unscientific Outer Limits "science."  Bellero just wants to hang and talk shop with his sparkly new friend, but Mrs. Bellero (Sally Kellerman) has bigger ideas. She's got her sights set on the alien's nifty shielding device, which she thinks will get hubby a shot at taking over his father's company. So she offs the alien, steals the shield and her barefoot housekeeper Mrs. Dame (Chita Rivera) helps her hide the body. I'm not gonna give away the ending for those who haven't seen it yet, but needless to say, things don't go according to plan.
This episode has been compared to Shakespeare by smarter writers than me. Specifically MacBeth, and I can see why. The bombastic dialog. Blood (or in this case glowing white alien "fluid") on an ambitious woman's hand. Descent into madness. The whole nine. But me, I'm not a fan of the Bard. Yeah, I know it's great literature and all that, but I'm more of a Film Noir kinda gal. And “The Bellero Shield” hits me in all the dark, shadowy sweet spots.
Sexy, scheming Femme Fatale willing to seduce, steal or kill her way to the top? Check. Well-meaning sap of a husband who thinks she might be cheating but is too whipped to do anything about it? Check. One impulsive crime that spirals out of control, leading ultimately to the downfall of everyone involved? Check. Throw in a lurid, downer ending and I'm in Noir heaven.
Funny too how, like the best Film Noir, this episode is all about light and shadow. Not just in the visual sense, but metaphorically as well. The alien is pulled down to Earth by a beam of light. It's made of light and comes from a place that is "not a planet, but an amplification of light."  On the other hand, the mysterious, murderous housekeeper is always lurking in the shadows, with only her bare feet visible. Mrs. Bellero is often shot with her face either partially or completely in shadow and much of her key interaction with Mrs. Dame takes place in the shadowy basement.
Also, the angelic alien seems almost asexual, a delicate, fey creature with a keen intellect and no real connection to the physical world. Mrs. Bellero is earthy, sensual and animalistic with her fur collar and imposing, statuesque physique. Scholarly types could probably make all kinds of brainy connections and conclusions about that, but lucky for you guys, I'm not one of them. I get right to the stuff that really matters.
So, are Mrs. Bellero and Mrs. Dame doing it or what? I know I'm not the only one who sees a strong lesbian undercurrent to this episode. Which is, of course, another reason why it's my fave. In a way, Mrs. Dame is John Garfield to Mrs. Bellero's Lana Turner. You know, like in The Postman Always Rings Twice. The swarthy, working-class employee who's banging the boss' wife right under his nose. Willing to do anything for his/her mistress, including murder.
And I got news for Daddy Bellero, who tosses off the juicy, preposterous line "Great men are forgiven their murderous wives!" just before he gets tossed down the stairs, Tommy Udo style, by his daughter-in-law's lesbian lover. That ain't necessarily so, Daddy-O. Not in Noir City, and not in the Outer Limits either. 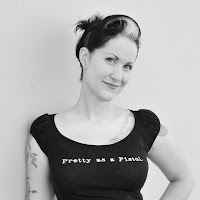