The Freak Tent, or: Welcome to the Sideshow

by David J. Schow
My pal Tom Gilliland, now an executive at Sideshow Collectibles, was overjoyed that he had helped coerce the company into producing some Outer Limits figures, and I was overjoyed that they called me in to participate. 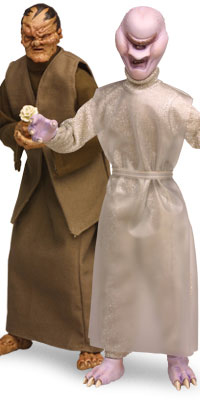 For one thing, The Outer Limits was in black-and-white.  For another, virtually all the Project Unlimited monsters were rendered in a dirty reddish-brown.  We needed to establish a palette so that each release would be distinctively-colored, so Andro from “The Man Who Was Never Born” got the default red-brown-beige scheme.  Ebonites, black and gray.  The Helosian from “O.B.I.T.,” mauve.  Desert colors for the Zantis.  So when it came to Ikar and his alien soldiers from “Keeper of the Purple Twilight,” keeping in mind the wild, pulpy sci-fi nature of the story, I said, “Let’s make them the most obnoxious shade of mint green we can find; they’re Little Green Men writ large.”  Sideshow somehow reproduced the horrific velour texture of their costumes, and when it came time to decide on a color, I had one word:  “Chartreuse.”
I lobbied heavily for the guys from “The Chameleon,” which would have permitted them to have crimson costumes (they were easy to accessorize, too, what with their medallions and guns and all), but eight figures in, the line ran out of steam. 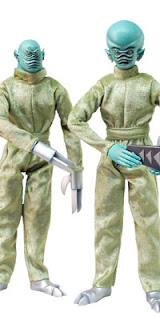 I ripped apart a Sideshow display box and glued it back together, inside-out, so I could draw a basic design for how the box art should look, including the wraparound sine-wave pattern.  We chose to keep blue as the predominant box color in order to echo the way the Outer Limits video boxes for the series looked at the time.  All the text on the box faces is adapted from The Outer Limits Companion, which also featured the blue scheme on its cover, taking a cue from a line in “The Galaxy Being” that described the alien as looking like “a man made out of blue light.”  (A translucent quarter-scale bust of the Being was also briefly considered, but never produced.  It would have had a light inside it.) 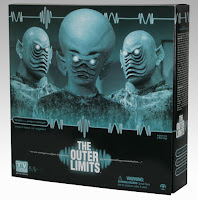 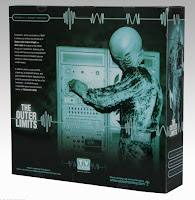 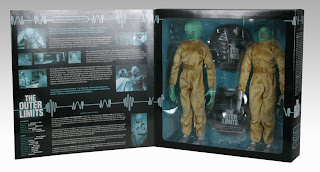 The humanoid figures were 12-inches high; the Zantis, full-scale.  I promptly sawed into the legs of the “Keeper” figures to add extensions that would make them taller than the human-sized figures (fortunately, the costumes could stretch). 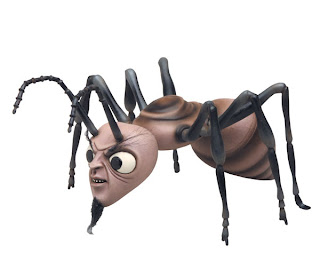 The dead-accurate likenesses were all sculpted by the incomparable Mat Falls, except for the “Keeper” figures, which were done by Philip Ramirez. 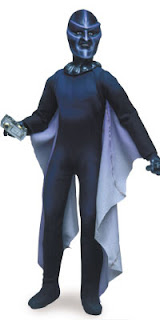 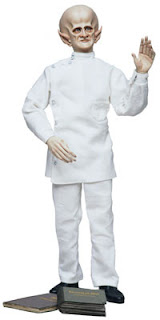 In order of release, they were Gwyllm (2002, with two books: “The Descent of Man” by Darwin and “Bach Preludes for Piano”), the Ebonite Interrogator (2002, with control box and torture wand), the “Keeper” figures in a two-pack (2002, with raygun), the Zanti Regent and Zanti Prisoner (2003, no accessories, but two figures sold separately), and the Helosian/Andro (2004, the latter with pistol, library book, and flower) as a two-pack.  Subsequently Gwyllm/Ebonite was also done as a two-pack.  For some inexplicable reason, the Andro/Helosian set seems to be the hardest to find, these days — it might have been a smaller production run as the line wound down (I’ve seen them north of $200 on Amazon).
After that, Sideshow requested a brief writeup for their catalogue (#7, 2004), reproduced here. 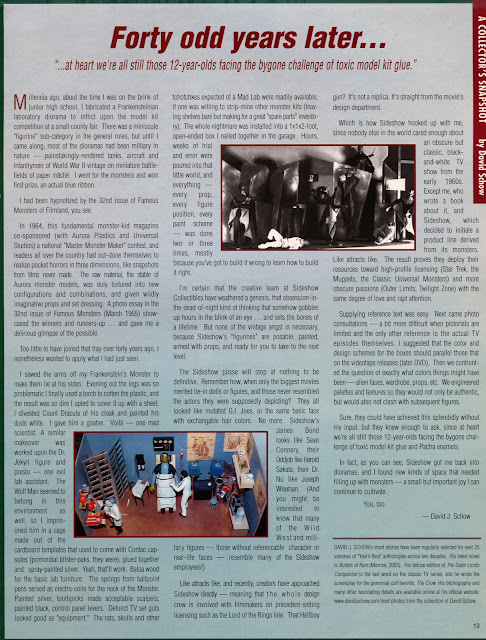 And if they ever work their way back around to “The Chameleon,” I’m ready…
Posted by John Scoleri at 6:00 AM