Another Spotlight on "Production and Decay of Strange Particles" 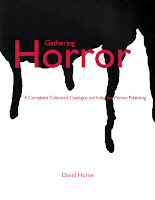 David Horne is the author of Gathering Horror: The Completist Collector’s Catalogue and Index for Warren Publishing (Phrona Press, 2010, currently available on eBay) and will be supplying the introduction to Creepy Archives 10

for Dark Horse in summer 2011. Though well into his fifties, he clearly is still wrestling with childhood issues. “In about twenty or thirty years I plan to start working through the adult issues,” says Horne.
Posted by John Scoleri at 4:00 PM