Spotlight on "Production and Decay of Strange Particles" 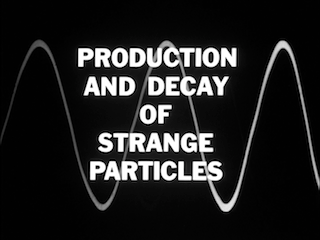 Written and directed by Leslie Stevens. Cast: George MacReady (Dr. Marshall), Signe Hasso (Laurel Marshall), Robert Fortier (Dr. Paul Pollard), John Duke (Dr. Terrel), Rudy Solari (Griffin),  Joseph Ruskin (Collins),  Willard Sage (Coulter), Leonard Nimoy (Konig), Allyson Ames (Arndis Pollard). Broadcast April 20, 1964.
Story: Dr. Marshall, a physicist conducting experiments at the Broadridge nuclear plant, accidentally starts a lethal chain reaction in the facility's core. His snafu opens a gateway to another dimension, animates the dead reactor crew members' suits with pulsating energy, and forces him to stop whining and clean up his mess.
It's a shame Leslie Stevens only wrote and directed four of The Outer Limits' episodes, and a crime that half of them aren't much good.
Not to disparage Stevens — the guy was a bona fide genius, and "The Galaxy Being" is as brilliant and essential as "Controlled Experiment" is good, cheap fun. But due to overwork, production pressures, scheduling desperation, and a preoccupation with scientific verisimilitude (or the appearance thereof, anyway), "The Borderland" and especially "Production and Decay of Strange Particles" are serious slogs.
Both episodes pivot on bright flashing lights, loud noises, endless scenes of people busily scurrying around labs, and indecipherable techie jargon, often shouted. At least in "Borderland" this was all meant to make an impression; the episode was Stevens's follow-up to "The Galaxy Being," and the first one produced for the newly green-lit series. In "Production and Decay" — cooked up by Stevens virtually at the last minute and shot a mere two episodes before the season finale — these elements are deployed mainly to pad and propel a skeletal script in which very little happens. If nothing else, it's an hour of television that lends itself to multiple, pause-button-free pee breaks. 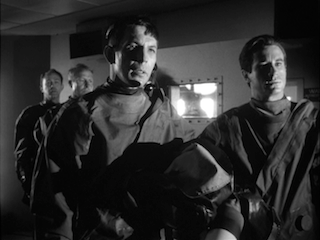 Every series has its bum episodes, of course, and watching "Production and Decay" on disc for review purposes emphasizes shortcomings that were likely easier to overlook during broadcast. (I barely remember it from back in the day, which speaks volumes.) And for all its flaws, the episode isn't completey disposable. Even when he wasn't firing on all cylinders Stevens still had something to offer.
The episode's energy creatures, one of the few elements I do remember from childhood, are used effectively for the first third or so, and an early scene in which one of them lumbers down a dark corridor and surprises a trio of crewmen even one-ups Howard Hawks's The Thing. (Among the crew are Rudy Solari and, fleetingly, Leonard Nimoy.) But by the tenth shot of these threadbare bears daisy-chaining their way around the reactor room the thrill is long gone, and even the nominal effect of lighting the interiors of their suit helmets has been discarded. Another effect — a corrosive liquid from the core being flung toward the camera — is also so overused that its inital shock fizzles. 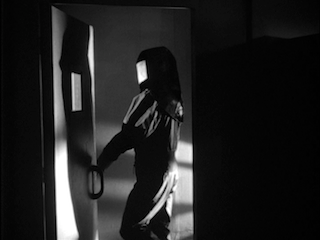 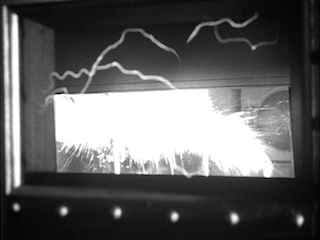 The real draw of "Production and Decay" is George MacReady, a veteran of the earlier, far superior "The Invisibles." Marshall is a thankless role weighed down by reams of expository hooey and an unappealing central character trait (he's a chickshit), but the actor's hushed, omimnous delivery and loopy mugging make the doctor strangely endearing. MacReady never has his tongue far from his cheek here, but along with the solid Signe Hasso he carries the episode — and at one point literally carries Allyson Ames. 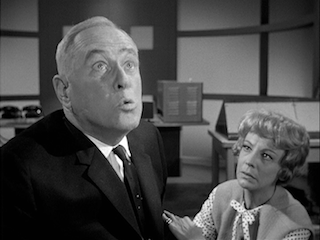 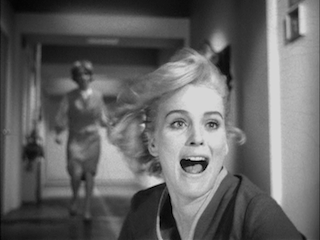 Stevens labors to invest "Production and Decay" with metaphorical weight, and there are flashes. Besides the autobiographical parallels with his punishing grind at Daystar and Marshall's insurmountable task at Broadridge (see my earlier review of "The Borderland" for more half-baked theorizing on this point), there's a nice moment in the pivotal scene where the good doctor finally mans up. The deflated-looking Marshall slowly stiffens with recognition that he's just allowed his wife to go into the deadly reactor room to do what he should be doing, and his response is identical to the energy creatures taking possession of the protective suits. It makes for a non-verbalized if fleeting corollary to the law of conservation of energy that provides the narrative backbone to Joseph Stefano's similar "It Crawled Out of the Woodwork," and MacReady pulls it off well. Marshall's heroic white shielded suit in the final scenes is also a good touch, and balances earlier shots in which he instinctively shields himself with opaque, protective barriers. 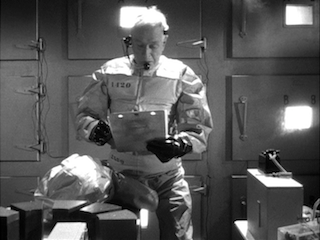 What "Production and Decay" really needs, barring emotional nuance and a more compelling narrative, is something The Outer Limits typically didn't shy away from: A monster fit for a walloping nightmare. The fury Marshall unleashes begs for its Quatermass moment, when it coalesces into something corporeal, sentient, and incomprehensible, a true foil to test the lily-livered doctor's mettle as well as a more feasible manifestation of all that bottling-up he's been doing. But no dice — whether because of the series' depleted budget or Stevens's love of science over lyricism (or both), all we get is old A-bomb test footage in forward- and reverse-motion and some sheepish gobbledygook about "time reversal effects."
I guess it could've been a lot worse, as Ben Brady was about to prove. And although it's not an episode I care to revisit again anytime soon, "Production and Decay" does have one characteristic that makes it worth watching carefully at least once. Despite a cold, pervasive, near-clinical weirdness, it counterintuitively reveals Stevens as the yin to Joseph Stefano's yang. Whereas Stefano's characters invariably find their way to the light only by excavating through deep, intractable darkness, Stevens's stand tall and are compelled to reach for it; even their customary mutual flaw, unchecked ambition, is backhandedly positive.
So kudos to Stevens for hiring someone so diametrically opposed to his sensibilities to run the show he created and loved — and to Stefano for following his own, more varied and memorable muse during production. Their partnership gives the show some of its edge, and inclines me to let Stevens's two lesser episodes off the hook.