Spotlight on “The Children of Spider County”

I boarded the WACT Limited a little late and was asked to essay some Spotlights.  When Peter showed me the list of episodes that were unspoken-for, the hallmark first season had been pretty picked over.  But I figured I should do my bit, so I chose “Spider County” for a couple of eccentric reasons.

The first is that this episode is not among my favorites, though it has its enjoyable aspects.  And looking back at the previous Spotlights, I see this may be an unprecedented commentary opportunity:  possibly the first show that the commentator finds difficult to rhapsodize over.  (Not even a bee-girl—damn!)  That’s perverse reason enough to take it on.

The second rationale is more personal and historical.  When I was doing my fanzine The Outer Limits: An Illustrated Review back in the late ‘70s, my friend Jim Wilson, already a comrade of the episode’s writer Anthony Lawrence, interviewed Tony for our second issue.  Wilson himself had been a prodigy and an orphan, for whom this episode held special meaning, and we kicked around its implications quite a bit (though we agreed that Lawrence’s “Never Born” script was clearly superior).  Wilson spent some years trying to launch the pilot for a sf show called THE PLANNERS, which never saw fruition.  It would have dealt similarly with gifted youth, albeit in a far-future sf-adventure culture.  So I guess I selected this “orphan” episode partly in deference to Jim Wilson, with whom I’ve lost contact.

With Leonard Horn back in the saddle, the Kenneth Peach Era begins…not all that dissimilar looking from the Connie Hall, actually, for the moment.  Carefully framed and dramatically lit, much of this show seems less like a visual changing-of-the-guard than a passing of the baton.  It’s still THE OUTER LIMITS, the teaser assures us, as we’re treated to a “messing with the geek” scene in the back of a police car.  Ethan Wechsler is harassed by a deputy and then summarily rescued by a business-suited, poached-eyed alien with a mandibled mouth and hoagie feet.  The suit is off-putting, but there’s no denying the pyrotechnic hook of Aabel the alien’s death-ray eyes, with their WAR OF THE WORLDS whining chirp of a sound signature. 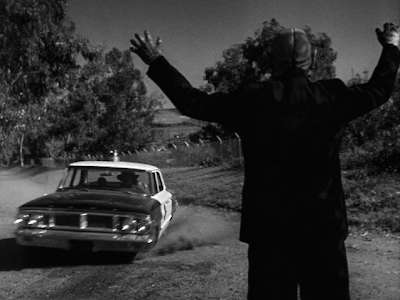 In the info-packed first act, we meet TV vet John Milford as U.S. Space Agency operative John Bartlett in a dark and conspiratorial “Architects” conference room.  There he lays out the plot about the disappearing geniuses of Spider County to other agents (including Roy Engel, the doc who took Klaatu’s “salve” to be analyzed in DAY THE EARTH STOOD STILL).  With typical TOL aplomb, we are told that “the Space Agency has reason to suspect an alien plot.”  It’s worse than they think.   A kind of MIDWICH CUCKOOS-lite scheme has been hatched by denizens of the planet Eros in the Krell(!) Galaxy.

The EROS NEEDS WOMEN intergalactic insemination ploy doesn’t hold up to scrutiny very well.  Like the Chromoites, they might at least have asked first.  All they apparently needed were surrogate mothers.   And it’s never illustrated how these now-grown offspring in Spider County, young men of superior intellect, might have been alienated because of their “different” abilities, despite the CV epilogue (wedgied?  their lunch money stolen?). 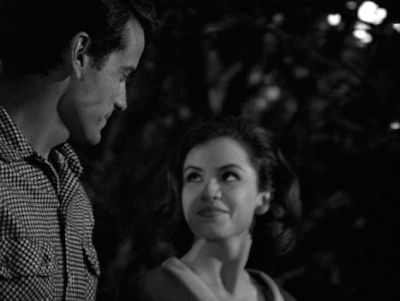 The only one we know has been oppressed is Ethan Wechsler, and his father has come to collect him and the others for the journey “home.”  But Ethan has fallen in love with the farmer’s daughter.  So Aabel arranges for his son to be framed-—or the suspected murder of a missing antagonist—to force his hand.  We get some acrobatic shots of Ethan behind bars and a nice speech about ostracism before Aabel springs him while in transit and fries a guard, showing that poppa means business.

The aristocratic Kent Smith returns from “Woodwork,” still unable to countenance bourgeois ignorance of superior intellectual concerns.  He’s also disdainful of farmers and their daughters.  He’s exasperated when Ethan insists he’s not going anywhere without Anna Bishop, played by Bennye Gatteys, who has little to do but look plump and sweet-faced, less a TOL babe than a convincingly corn-fed farm girl.  Mr. Bishop hangs around insistently with his shotgun and a death wish, provoking Aabel to first daze, then finally disintegrate, the ornery farmer.  Bishop is played by the dependably untrustworthy Dabbs Greer, the ubiquitous staunch community fixture, who’s always either stalking you for being an alien or sticking one in your car’s trunk (INVASION OF THE BODY SNATCHERS).  And Lee Kinsolving, in his “juvenile delinquent” phase, is more fitting here as Ethan, a young man with an angst to grind, than in TZ’s “Black Leather Jackets.”

We also get the long, somber face of Crahan Denton (“Pigeons from Hell,” THRILLER-philiacs!) as the sheriff.  He’ll be back, lending gravitas to “Counterweight” in season 2.

The conflict is quickly established, and we’re treated to some snappy action, variety in sets and locales (when did you ever think TOL would lead you into a barn loft?), Aabel posed in a tree(!), and even a claustrophobic nightmare by Ethan that looks like…well, “Nightmare.”  But then, after Bartlett arrives and tries to function as Ethan’s proxy father in defense of the human side, things begin to bog down.  What promises to be REVENGE OF THE NERDS, TOL-style, becomes DEATH OF A SALESMAN in alien drag.

There ensue a lot of repetitious chases through those familiar woods, cars traveling the same tree-lined road, and stalking scenes featuring the off-again/on-again alien Aabel.  Repetitive philosophical arguments concerning Aabel’s mandate and Ethan’s demurral.  Aabel’s conviction of the contempt for dreamers on Earth and assurance of the welcome that awaits them as saviors of Eros.  Dismissal of earth as a haven for “dogs and desperation,” and a lot of chasing by desperate dogs.  One more redundant attempt by his alien father to force Ethan again into the rough hands of human authorities, in order that he might be “scared straight” and flee to Eros.  And Ethan’s own foiled complicity in an attempt to capture Aabel.

After Aabel’s ship arrives like a self-propelled light bulb, the gathering of the four missing men with Ethan and Aabel for a final reckoning seems superfluous; they’ve been absent for the entire story and bear no sympathetic weight.  Ethan’s remonstrating about his preference of (still hopeful) Earth over (beyond hope) Eros for dreamers wins over the other hybrids a bit too summarily.  And Aabel finds enough paternal propriety within him that he can’t “uncreate” Ethan as punishment for his disobedience.  (Lots of “uncreating” going on in the TOL universe, what with Aabel, the Andromedan, Turdo…)  Does that wash?  Not without a bit of a pre-soak involving facile acceptance of the good old love-conquers-all principle.  We’re conditioned to want to believe it, but…again?  With coldly calculating aliens whose entire race is at stake?

Let’s give Aabel the benefit of the doubt.  He was, after all, capable of some flights of lyricism, like his claim of hearing “the silent sigh of a star.”  We’ll assume that something vital was rekindled in him that he’ll take back to Eros for the salvation of his erstwhile dreamless race (assuming further that his conventional-looking spacecraft can somehow span the ineffable gulfs between galaxies).

Where does that leave the five hybrid offspring?  One would hope, not in the hands of “dogs and desperation,” of those killers who kill “slowly and partially”—like with tests and scans and probes and lobotomies and dissection, for the sake of science and planetary security.  (Ethan should probably try to enjoy and prolong that sun-dappled dalliance with Anna.)  In short, we hope that Aabel had it wrong.

And where does that leave the viewer?  With an ostensibly sweet-natured conclusion that’s rather bereft of cosmic scale and emotional weight.  It’s hard to contest the tried-and-true “dreamer” appeal to “strong love, and soft hands” as the default solution for all human—even alien—ills.  It imparts closure, of a sort.  But where dramatic resolution is concerned, we’d like something with a little more heft.  What begins on a promising interstellar canvas is ultimately an earthbound tale of estrangement and disappointment between one father and his son.

“Sorry, Pop—I don’t dig being you.  So pass your corporate legacy on to some other lackey.  I’ve gotta dream for myself.”

A worthy enough dramatic conflict.  But for this we needed the U. S. Space Agency and a bug in a business suit?  It simply reads like an episode whose intrinsic theme is drowned under needless bombast.  And the imaginative trappings of TOL should never feel needless or bombastic.

Ted Rypel is the author of the GONJI

series of adventure-fantasy novels.  He has also written about THE OUTER LIMITS for Fantastic Films magazine and in his own late-‘70s fanzine series, The Outer Limits: An Illustrated Review.
Posted by John Scoleri at 2:00 PM