Spotlight on "The Mutant"

INT: Why do you always open with that?

STEVE: Kind of my trademark greeting…it puts me in commentary mode.

INT: This is “our” third and final OUTER LIMITS commentary.

STEVE: Too bad, I was just getting warmed up.

INT: This was a tough one to get through, wasn’t it?

STEVE: It really was. JOE STEFANO was quoted as saying this was their “worst show” in THE OUTER LIMITS COMPANION. For me, it was a candidate for that category and, by any standard, it was certainly a weak outing. On review, I was a bit surprised that it was. This episode made quite an impression on me back in 1964. Maybe it was because the image of WARREN OATES, with those bug eyes, made perhaps too indelible an impression with an impressionable young viewer. 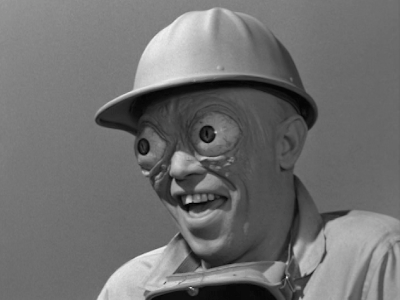 INT: It reminded me of KILLERS FROM SPACE, which at the time was cool and creepy.

STEVE:  You were so young. In fact, this episode is loaded with 50’s genre elements and conventions and, unlike most TOL episodes, not in a good way; cheap sets and cheap effects contributed to that 50’s “quickie” look, which I generally did not associate with TOL.

STEVE: ‘Fraid of getting those bug eyes? In a nutshell, this episode is sort of boring. Not a quality I normally associate with the show, but after that very long tease, which spoils one of the few cool reveals, things got duller. I have to attribute some of the blame to Director ALAN CROSLAND, JR., who did very little to make the hour interesting, both cinematically and emotionally.  Crosland did unremarkable yet professional work on shows like BAT MASTERSON, MEN INTO SPACE, THE TWILIGHT ZONE, and COMBAT, so he was good at the fundamentals and I’m guessing he made his “days.” Yet the work is so of the period: solidly covered, but workman like.

INT: The last two descriptives are not what I usually associate with TOL.

STEVE: Exactly. The episode looks like a pro hour of 60’s TV and, while I appreciate craft—it makes watching a lot of old shows fun—it doesn’t make them very good. What makes TOL so successful and enduring, for me, is that it generally does not feel like TV from the early 60’S. It almost always finds a way to be something of a little movie with all the implied values of a feature film.  This show really has none of that, except for a few moments courtesy of Bronson Cave. Even Crosland found some interesting angles and shots inside the cave. I also thought KENNETH PEACH, the DP, got a bit more inspired inside those famous walls. Bronson Cave makes almost the dopiest of stories look better because it is impossible not to be cinematic in that cave; such an amazing location, which is actually in Hollywood.

INT: Very cool place to visit by the way.

STEVE: You can almost feel the ghosts of genre movies past lurking about.

INT: This is not a public service for the Hollywood Chamber of Commerce, my friend. Back to your acid rain…

STEVE: So pushy. Everything was sort of off with this episode. I’m not completely sure what this show was about, and I’m guessing the cast and crew didn’t either. I know that they had one less day to shoot and maybe that “rushed” things. Look for that DAYSTAR apple box propping up the bed in the early interior scene in ROBERT SAMPSON’s quarters. My guess is the operator saw it and did not care, or they had no time to reframe the shot.  Maybe both.

INT: We’ll never know. I thought that this show had a pretty good cast, though. WARREN OATES has never been bad a day in his life.

STEVE: True. One of the reasons I wanted to watch this episode was because I’m such a fan of his work. He would not have been my first choice for Reese Fowler, but the offbeat casting of Oates made his part of the show somewhat interesting to watch. Considering that he is the “bear” of the episode, another actor might have hammed it up with some early 60’s TV fire and brimstone, but he kept it low key, menacing, and complex. His kind of actor is something we don’t have much of these days. Sure, the talent is out there, but guys like Oates inhabit their parts in a way that take the “acting” out of the performance. They find the simple truth and let it work. Even with the goofy but cool bug eyes, Oates never seemed embarrassed by his character.

STEVE:  At least he felt like a scientist unlike…

INT: The rest of the cast?

INT: We both saw the same show. I know that you like LARRY PENNELL.

STEVE: He was the star of one of my favorite THRILLER episodes: "LATE DATE." As a kid I enjoyed him on RIPCORD, a little known but moderately successful ZIV syndicated series, which he starred in with KEN CURTIS, who later joined the cast of GUNSMOKE as FESTUS. In retrospect I’m surprised that Pennell wasn’t a bigger TV star. But for this outing, he was just too virile to play, for me, a psychiatrist, but he was also the romantic lead in the show so…

INT: He sort of fits, which is faint praise. Same can be said of BETSY JONES-MORELAND.

STEVE: In some ways she was well cast. She was attractive, but not in a glamour puss sort of way and I kind of believed her as a scientist, but what was the deal with the earrings, bracelets, and high heels?! Not standard kit for colonizing a new world. This was another 50’s SF movie choice that led to a higher “queso” factor than usual. I couldn’t believe that she was actually running toward Bronson Cave in those heels and slid down the side of an embankment and almost took a tumble…probably for real.

INT: Since you bring up “real,” I didn’t really believe her “feelings” for Pennell.

STEVE: Why would you? They didn’t have much in the way of chemistry. NANCY MALONE and NICK ADAMS for example in “FUN AND GAMES,” have better chemistry. Jones-Moreland wasn’t a bad actress, actually. She survived three movies for ROGER CORMAN, and had a career that lasted over 20 years. 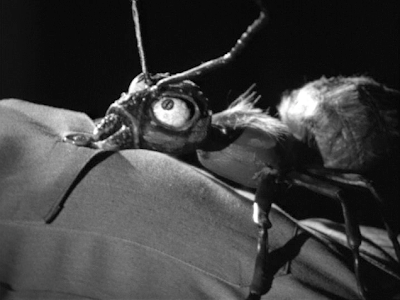 INT: Nice to see one of our old Zanti pals guest star in the third act.

STEVE: One of the more dramatic moments largely due to something scary from another episode…unfortunately. I know that some folks might find the climax of this episode thematically satisfying, dying alone and in the dark, but for me it was a pretty weak resolution to a talky hour. Our heroes ultimately did nothing to defend themselves against Reese. He just perished in the darkness.

INT: The dark was his kryptonite.

STEVE:  Of course, but from a drama stand point they still did nothing. “Nothing” isn’t very exciting or suspenseful, no matter how much they tried to sell it with Frontiere’s great music cues. I also understand that Reese destroyed himself because he couldn’t stand to be alone, which is ironic, but I’m never a big fan of irony as a substitute for the characters resolving their own conflicts and fate.

INT: A little strict there, aren’t we?

STEVE: Perhaps. Watching characters dig deep into themselves and surviving life and death conflicts is the fundamental stuff of drama. That is why we watch. We want to have some idea as to what we might do if thrown into the same or similar situation. For me that need is not satisfied with the climax of "THE MUTANT." Our protagonists watch, then walk away. Very ho-hum.

INT: Isn’t that what real people do after they see some tragedy?

STEVE: Ironic isn’t it? Just not dramatic or fun. I was happy when the Control Voice returned control of my DVD player to me to watch something else.

INT: Dude! You are on tilt!

STEVE: Not really my intent, but you just bring it out of me. On kind of a surprise note, I was a little bit surprised to see that RICHARD DERR, the star of WHEN WORLDS COLLIDE, in the end credits as “Griff.” I liked Derr, and it would have been nice for him to do a bit more than what amounted to a silent cameo in this show. Another flaw in an overall flawed outing of TOL.

STEVE: After a spirited debate earlier today with my lifelong pal, GARY GERANI, who sees more in this show than I do,  I give the overall episode a reluctant but upgraded… 1 ½ Zanti. BUT…Warren Oates gets an enthusiastic…3 Zantis. Gary, you can average them out however you see fit.

INT: I agree with you. Well, this has been a lot of fun for me, and I enjoyed talking with you, Steve.

STEVE:  Been a blast! I hope the fans of the blog have enjoyed our “chats” as well.
Posted by John Scoleri at 2:00 PM