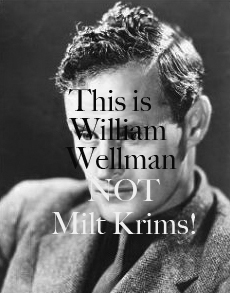 WACT Readers, confirm or deny as you please... but this may be the only photo I've ever seen of the personage who might possibly be MILTON KRIMS, alongside two shots of Mrs. Krims — Shirley O'Hara (no  relation to Margaret O'Hara, "Counterweight"'s space stewardess — but Shirley DID appear in two OUTER LIMITS episodes:  in "The Human Factor," as Dr. Soldini, and in "Expanding Human" as a receptionist), in TARZAN AND THE AMAZONS and on the set of Val Lewton's GHOST SHIP.  Krims also dated legendary siren Allison Hayes in the late 1950s! 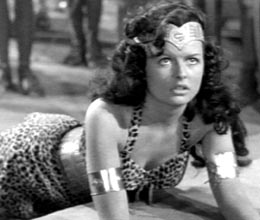 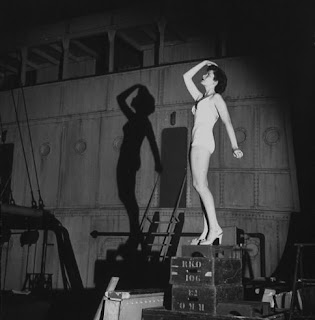 Milton Krims, a screenwriter, died of pneumonia on July 11 at the Motion Picture Country Home and Hospital in Woodland Hills, Calif. He was 84 years old and had suffered from Parkinson's disease for many years.

Mr. Krims wrote more than 25 screenplays for Warner Brothers, 20th Century-Fox, RKO and Universal, as well as television scripts and novels, during a career that spanned 40 years. His movies included ''The Great O'Malley,'' a 1937 film about a tough cop; ''The Iron Curtain'' (1948), one of the first anti-Communist films of the Cold War, and ''Confessions of a Nazi Spy'' (1939).

Mr. Krims acted on Broadway and wrote for The Brooklyn Eagle in the late 1920's. He wrote several novels, including ''Dude Ranch,'' which was made into a movie in 1931.

During World War II, he served in the Army Air Corps, and covered the war and its aftermath for an Air Force magazine. Mr. Krims wrote for the ''Perry Mason'' series and other television shows in the 1950's and 1960's. He also served as film editor for both Holiday magazine and The Saturday Evening Post in the 1970's.

A successful screen actress in addition to her work as a prominent public relation executive, Shirley O'Hara Krims found fame on the silver screen with a series of films in the '30s and '40s before redefining her career in the '70s. Born in Rochester, MN, Krims was quickly signed to RKO after relocating to Hollywood at the tender age of 18. Her early appearances came in such films as TARZAN AND THE AMAZONS (1945) and the film that provided Frank Sinatra with his first feature role, HIGHER AND HIGHER (1944). An avid supporter of American soldiers during World War II, Betty Davis presented Krims with a Support for America award for her work with the USO's Hollywood Canteen. After turning toward television in the '50s and '60s, Krims became the public relations director for Burbank Studios (later acquired by Warner Bros.). Krims was also a noted philanthropist, and through the Publicists Guild, the former actress supported such organizations as Operation Children. Married to Jimmy McHugh Jr. early in life, Krims would later wed Oscar-nominated screenwriter Milton Krims. In late December of 2002, Shirley O'Hara Krims died from complications of diabetes in Calabasas, CA. She was 78.
Posted by John Scoleri at 6:38 PM