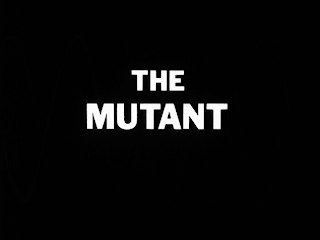 The inhabitants of Annex One, a handful of scientists, are held in fear by Reese Fowler (Oates), mutated by a deadly silver rain into a brain-reading, body-disintegrating curmudgeon with really big eyeballs. Dr. Evan Marshall (Pennell) may be the only hope for the desperate scientists.
PE: Nostalgia time. Other than "Zanti," this is the episode I have the fondest memories of from my childhood. Other than the gawdawful interplay between Pennell and Betsy Jones-Morland (more on that later) it holds up nicely as a fun hour of goofy science fiction and fabulous Bronson Canyon locations (coincidentally, we were given a guided tour of Bronson, by our OL compadre DJS, several years ago).

JS: Unfortunately there were no Mutants, Pod People, or Batmobile sightings that day. But a cool hotbed of 50s-60s movie and TV history. 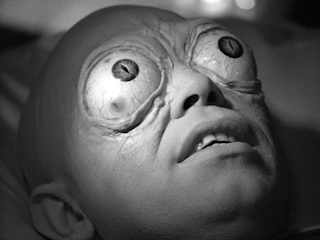 PE: Lots of little bits to like here: the aluminum houses our scientists live in (it's got to be pretty freakin' hot in a tin house on a planet with no night), some of the photographic flare we've come to appreciate (especially the playful cut from Riner's death to Marshall's lounging) and, of course, Oates' goofy make-up. Other than his trademark big-ass buck teeth, Oates is unrecognizable in his bug-eye make-up (DVD high def is not kind to Oates' bald cap however) but does his best to convey the anger, insanity and, yep, sadness that envelop Reese. His terrified cry when Riner shuts out the light in his lab and Reese's plea for Riner to stay with him evoke images of a frightened child, albeit a child with really big eyeballs!

JS: Once again, the teaser spoils things by prematurely revealing Reese's fried-egg eyes. I think that first reveal would have been far more effective had we had a chance to build up to it. Instead, we know all along why he doesn't go anywhere without his glasses on. A missed opportunity.

PE: I gotta ask though if Oates couldn't see very well through his props and is that why he was constantly stumbling and nearly walking into things or was this his interpretation of what a big-eyed mutant would experience? If the latter, the man was a genius. 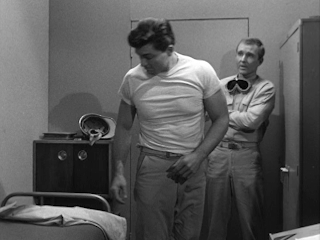 JS:  It was nice to see our pal Larry Pennell from Thriller's "Late Date." Damn shame they didn't have a T-shirt in his size for this episode (XS). And how about Julie's (Betsy Jones-Moreland) wardrobe. I assume  all that jewelry, a skirt and high heels represented the latest in intergalactic fashions. Perfectly appropriate when stationed on a remote planet.

PE: I'll admit to not being bowled over much by Walter Burke in our previous three meetings, but the little guy really hits a home run in this one for me (especially his death scene) and I'll be a little more open-minded towards the actor in the future (whoops! last appearance! oh well!). 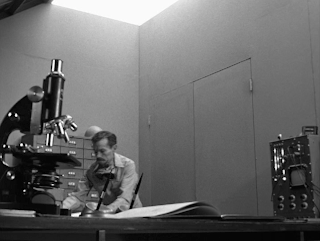 JS: And he's really short! In the lab I couldn't tell if it was forced perspective, or if he was actually smaller than the microscope.

PE: L-OL scene has to be its most tragic as well. In our only glance at an un-mutated Warren Oates in a narrated flashback, we see Reese (Oates) happily planting gardenias in the outside flower bed (approx four feet away from shelter... pay attention, this is important) when an acid rain begins to fall. As our narrator, Dr. Riner (Burke), informs us, the other scientists are watching from a window and just know, instinctively, that it's gonna rain and it won't be good news. So, instead of opening the door and inviting Reese in, they watch as the scientist has his eyes opened to the dangers of acid rain. Reese writhes in pain (well, actually he falls down, somersaults, and makes angels in the dirt) and emerges an angry man with really big eye balls.  Do you blame him for knocking the others off one at a time?

JS: And yet he didn't get around to using his magic pixie dust on Julie. When she's giving Evan her big "Orwellian" speech, he gives her a look of, "I don't know what the hell you're talking about." And I'm guessing he wasn't the only one thinking that. 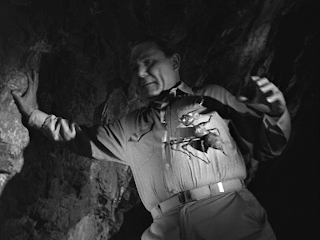 PE: In our most pleasant surprise of the evening, it becomes apparent that the wardens of Zanti haven't limited banishing their bad boys to Earth. This one's a bit bigger but not much of a menace since he doesn't move a mandible in his entire screen time.

JS: What a treat that was. It was like finding a second toy surprise inside the cereal box!
PE: The suspense and intrigue is constantly stopped dead in its tracks thanks to an on/off romance subplot  ("When a girl runs as fast as I did, she's bound to bump into someone and I bumped into Griff. Afraid I didn't take too good a look. I was too busy being helped up.") between Evan (Pennell) and Julie (Jones-Moreland) that is about as fascinating as Jones-Moreland's other acting credits (Creature from the Haunted Sea (1961) and The Last Woman on Earth (1960) jump out at you). Obviously, we're back to the matronly women of The Outer Limits after some experimenting with babes.

JS: One big drawback to this episode was its bland look and feel. The interior sets were mundane by OL standards, and there was an absence of dramatic camera angles and lighting we've come to expect. Aside from the exterior location shots, there's nary a shadow to be found throughout much of the episode.  Fortunately, the BEM goes a long way towards making this episode watchable.

PE: And how about that powerful, ambiguous climax? Just how long do the survivors have to wait in that cave?  Sure, they're imbued with the power of love but, for gosh sakes, manly Larry Pennell's stuck in a dark cave with a woman who looks old enough to be his mother and Zantis crawling all over, barred from exiting by a guy with really big eyeballs!

JS: The most unsettling moment of the episode for me came during the Control Voice's intro. Just what the hell are the doctors delivering in the birthing scene (the child of a Hollywood couple?-PE)? 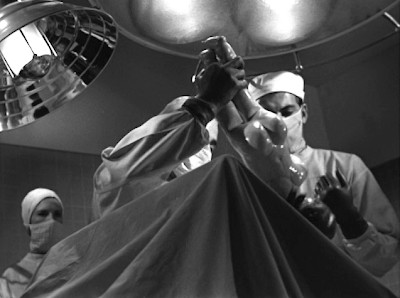 David J. Schow on "The Mutant": 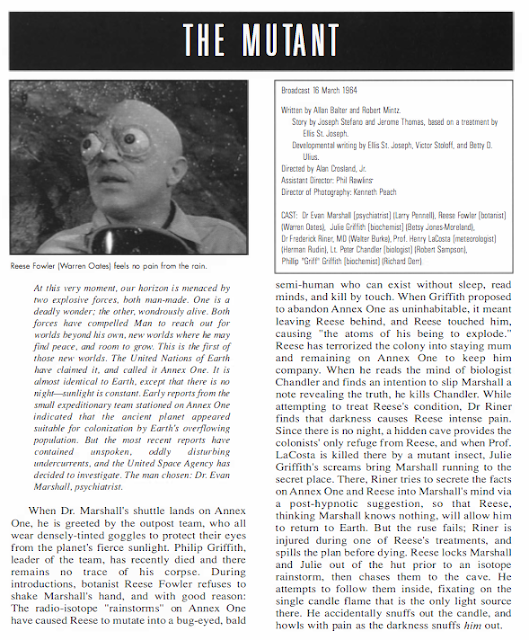 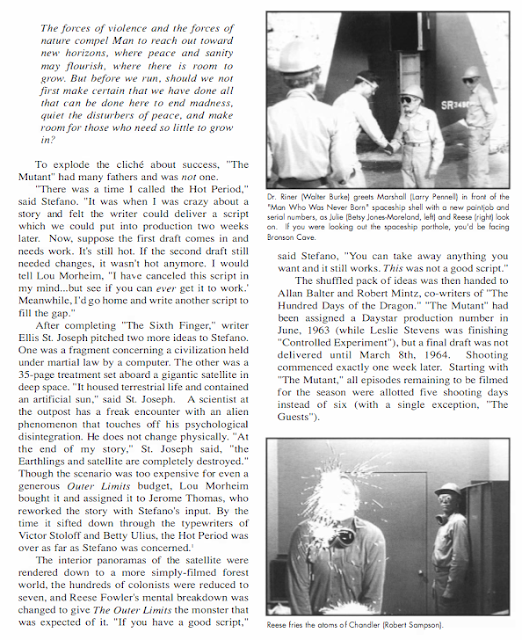 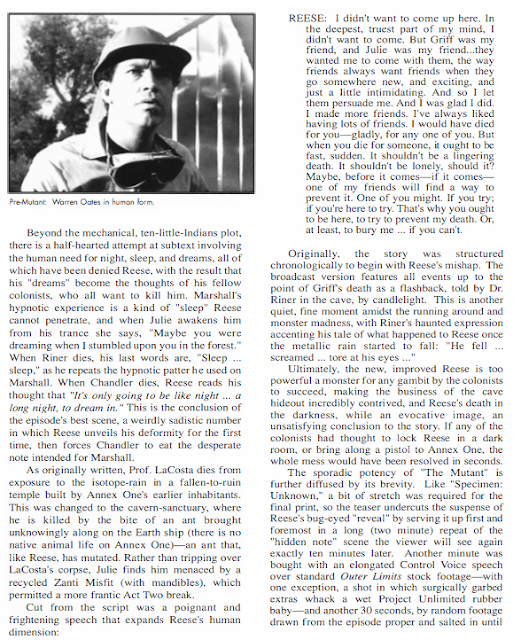 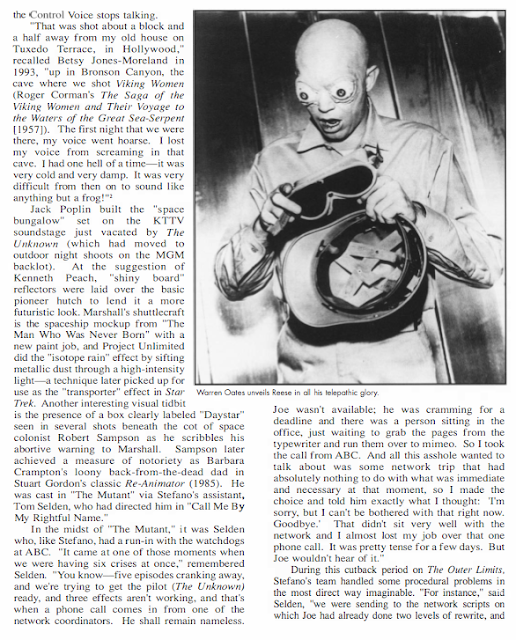 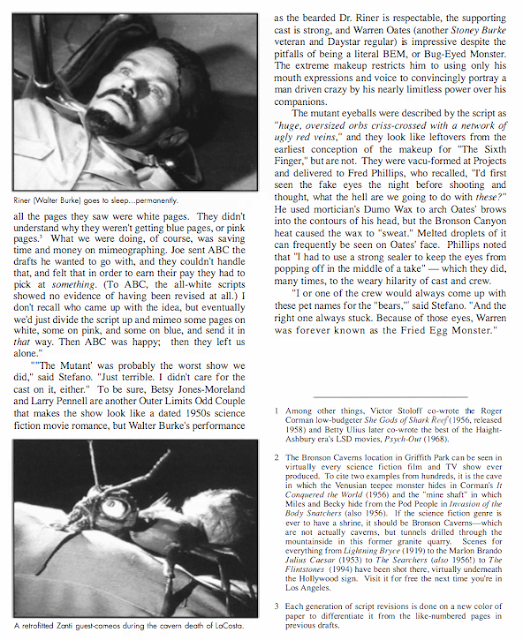 
Be sure to check back later today for Steve Mitchell's Spotlight on "The Mutant." 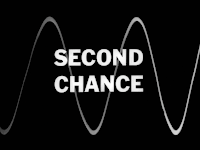