by John Scoleri
Right now you're probably thinking what the heck is John doing writing a Spotlight? Doesn't  he already have a forum in which to talk about every episode? And didn't he say in the beginning that he hadn't seen that many episodes?

Well, yes and yes.
When we were initially set out to assign the Spotlights, Peter and I each signed up for one. Peter quickly realized that the first issue noted above made it a challenge to come up with more to say about a particular episode ("Tourist Attraction"). In my case, there was only one episode that I even considered, and that was "Soldier."
The first time I saw the episode was at the 1991 World Fantasy Convention, where Harlan Ellison was the guest of honor. He introduced a screening of it, before which he spoke about the Terminator lawsuit. It was fascinating to hear the story from his perspective, and rather than attempting to reiterate it here, I thought I'd toss to Harlan to briefly discuss it and leave it at that.

Ellison's story (retitled "Soldier of the Future" by the editor) first appeared in the October 1957 issue of Fantastic Universe, and was later reprinted in his collection From the Land of Fear. That book also contains a version of his teleplay for the episode, though interestingly enough, not the author's preferred version, which is included in the Kevin J. Anderson collection DJS mentioned in his OL Book Spotlight called The Outer Limits: Armageddon Dreams

published in 2000 by BSV Publishing.

The story opens similarly to the episode, with Qarlo on the battlefield. After being zapped, he (alone) appears on a New York subway platform. The shock of his appearance causes a newspaperman to have a heart attack, and after an altercation Qarlo is subdued and arrested. The philologist is brought in to help the man responsible for Qarlo, Lyle Sims. Sims ultimately decides the best way to use Qarlo is on a speaking tour to warn people of the horrors of war. Qarlo's first person (and surprisingly graphic) depictions of life (and death) on the battlefield were quite interesting, but aside from that I found the story disappointing.

Ellison's teleplay improves upon his story considerably. Rather than beat you over the head with the heavy-handed war-is-bad message (It feels like there should be a clip-out anti-war coupon to sign and send in when you're finished reading it), the teleplay shifts  the focuses to Kagan, who I find to be one of the OL's most fascinating characters. 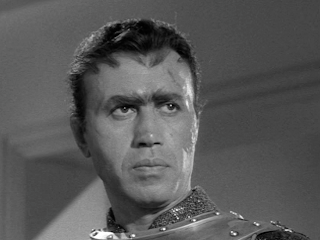 Let's think about this for a minute. Say you're a Bureau-hired philologist (Another brief aside—one of the thing's that annoyed me in the short story was that he's described as the "philologist named Soames" three times in the first several paragraphs after he's introduced. You'd think FU was paying Ellison a premium for using the word philologist!). You show up for your latest FBI appointed gig, see your subject is the Frankenstein monster, and let's face it, you check all the right boxes, have the guy declared a psycho, and catch the next plane back to Quantico before lunch, right? You're not going to volunteer to jump into the padded room with the unrestrained beast, let alone invite him home to stay with the wife and kids!

But for Kagan, these things are done without a second thought. He's a man committed, if you're willing to believe it, to the betterment of mankind. Why else would he assume so much personal risk on account of this stranger? What makes Kagan so uber-cool is that he's not what you expect to see when you describe a 'Hero.' He's an average Joe, and in a completely believable way, fearless. He's no fool—he certainly recognizes the threat that Qarlo represents—but he's also not irrational, rushing to judgment about what he does not understand. And at the same time, he's not our typical egghead OL scientist-type, so caught up in his work that he lacks a life away from it. He's a loving husband and father, and a genuinely good person. It comes across in the way he interacts with his wife, with his kids, and with Qarlo. 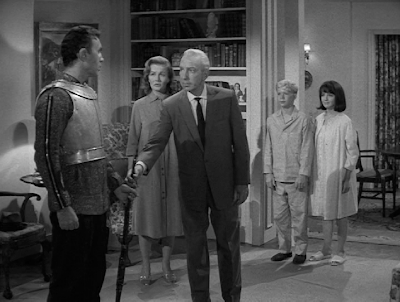 Credit is certainly due to Ellison, although it works for me because of Lloyd Nolan's performance. I may be in the minority, but I think he fit perfectly in the role. In lesser hands, the character could have easily come off as laughable. Instead, we get an incredible portrayal of a man convinced in the capacity of the human race to be peaceful.

While it doesn't necessarily play to the strengths of the series of which it's a part of, "Soldier" remains one of my favorite episodes of The Outer Limits.
Posted by John Scoleri at 2:00 PM