Spotlight on The Outer Limits Books

SOME OUTER LIMITS BOOKS …
… and by that I mean other than THE Outer Limits Book, with which you should all be increasingly familiar whether you wanted to or not.  Forget that 30-foot shelf of Star Trek and Star Wars novelizations; these are some of The Outer Limits’ precious few encounters with the Tie-In Zone.
— DJS
OUTER LIMITS YOUNG ADULT NOVELS 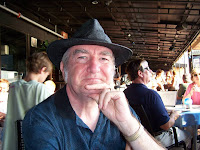 JOHN PEEL is the guy responsible for turning The Outer Limits into a series of 12 Young Adult books, the first of these being a "teen adapt" of "The Zanti Misfits" so faithful to the original script — Peel credits Stefano — that the Zanti dialogue is all transliterated verbatim.
Peel has also written as "Nicholas Adams," "Rick North," and "J.P. Trent."  Here's what he had to say on his website.
I wrote 12 books based on the TV series The Outer Limits. The first two were taken from episodes of the series and the rest were originals. As I was allowed to write pretty much anything I liked, some of these stories were quite wild! My editor on the series was Jonathan Schmidt, who later became a writer himself. The terrific covers were all created by Peter Bollinger.

(1) The Zanti Misfits (TOR Books, 1997)
Ben Garth and Lisa Lawrence are bank robbers on the run from the police. But they stumble into the middle of a protected area and witness the landing of alien creatures - creatures that threaten to destroy the world if they're at all interfered with...
This was an episode of the Sixties series that still gives me chills. A terrific story with scary effects. I couldn't resist the chance to turn it into a book.
(NB: And for what it is … it’s pretty cool.  And Lisa Lawrence is a hot young thang in this version. — DJS)

(2) The Choice (TOR Books, 1997)
Aggie Travers has strange powers she's having trouble controlling. She's befriended by a substitute teacher, Karen. But a Government agent is after Karen - children she's helped before have vanished.
This was my favorite episode from the Nineties revival series, so it was the other TV episode I novelized.

(3) The Time Shifter (TOR Books, 1997)
Brandon Mooney has just met - himself! Or so the old man claims.He says he's Brandon come back in time to avert the terrible disaster that will overtake his world. But Brandon soon discovers that the true menace to the future might be - him.
I can't resist time travel stories, and I get annoyed at the ones that get the idea of changing time all messed up. So this was my take on films like The Terminator.

(4) The Lost (TOR Books 1997)
Stacy Harvey sees problems when kids in her town start changing into perfect little citizens overnight. They're listening to middle-of-the-road music and even studying. Naturally the adults think this is great, but Stacy is convinced there's something evil afoot.
This was probably my favorite of the series. It's paranoid and has a really appropriate and nasty ending... The cover was so good that TOR used it for posters they produced to promote the books.

(5) The Invaders (TOR Books, 1998)
Everyone knows that dinosaurs have been extinct for millions of years. So why are they now being spotted in the desert? And why are people getting sick and then changing?
This was my response to Jurassic Park - what if the dinosaurs themselves knew they were going extinct and had a plan to handle it? 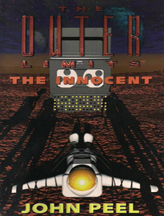 (6) The Innocent (TOR Books, 1998)
All of the adults on the planet Tarshish have been killed off. Only the children, protected by a sentient computer, have survived. But can they work together to create a new world? And what will happen when more adults arrive?
Jonathan asked me for a Lord Of The Flies type of story. Being an optimist, I came up with a positive spin on the idea, where the kids actually do better than the adults - at least for a while.

(7) The Vanished (TOR Books, 1998)
Nick Morgenthau wakes one morning to find himself alone - really alone. Everyone else on the planet seems to have vanished. He treks to New York, figuring any other survivors will be there - and if he's lucky answers to what has happened.
An old staple of English TV was of people waking to find the town empty for various reasons. Those images of places being abandoned stuck with me and led to this story.

(8) The Nightmare (TOR Books, 1998)
Cassie Wilson discovers that her dreams are starting to come true. When that begins to include her nightmares it gets really scary - especially since she's dreaming about the end of the world.
Probably the least successful of the series, the idea for this book came from Jonathan. It didn't quite grip my imagination and so this is a weaker book than the rest.
(NB: This book is not based on either version of the “Nightmare” episode — DJS)

(9) Beware The Metal Children (TOR Books, 1999)
Roger is a robot shaped to appear 12. He attends school, but is never allowed to graduate from seventh grade. When normal children stop being born, resentment with the metal children seizes the surviving humans.
This was my homage to Clifford D. Simak, one of my favorite authors (City should be required reading in all schools!). His tales are always gentle and character-based. This one came about as I thought every kid's nightmare must be to have to repeat the same grade over and over again - forever. Oh, and the title wasn't my choice! I just called this The Children.

(10) Alien Invaders From Hollyweird (TOR Books, 1999)
There's an alien invasion movie filming in town, but Malanie and Jeff discover that they're not special effects - the aliens are real, and using the movie as cover. But what is it that they're truly after?
Not my title again - I called it The Blockbuster. I'd just seen Independence Day and was struck by the thought that aliens could hide by pretending to be fake aliens...

(11) The Payback (TOR Books, 1999)
An animal experiment goes disastrously wrong when animals gain an infectious brain enhancement that enables them to think and talk - and act. It's time for the human race to discover what the rest of nature really thinks of us.
As a dog owner, I often wondered what the dogs thought of the whole business - especially the horrible names some of them are inflicted with. Would they love us for our treatment of them? Then what about cows? Or zoo animals?

(12) The Change (TOR Books, 1999)
Lucas Wright lives on a space station with his family. It's suddenly invaded by alien creatures who infect the humans and place them in embryonic sacs - changing them into what?
This came out of watching movies like Alien, where monsters attack. I just liked the idea that what they seem to be doing is not quite what is actually happening at all.
(Above excerpts copyright ©David Peel 2000-2010.)
NOVEL-LENGTH TIE-INS

In 2003, Stan Timmons checked in with two original Outer Limits tie-ins, Always Darkest (“The first original novel based on the hit TV series!”) and Dark Matters, done in both trade paper and mass-market versions by iBooks in 2003-04.
SHORT STORY TIE-INS 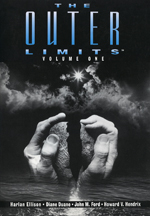 THE OUTER LIMITS: Volume One
(Prima Publishing, 1996)
Edited by Debbie Notkin & Roger Stewart
Contents:
“Soldier” by Harlan Ellison (reprint)
“It Crawled Out of the Woodwork” by Diane Duane
“If These Walls Could Talk” by Howard Hendrix (a NOTer Limits)
“The Sixth Finger” by John M. Ford
The facing page for each story features a photograph from the episode (as do the succeeding volumes).  The Introduction miscredits Joe Stefano as “Joseph DeStefano.” 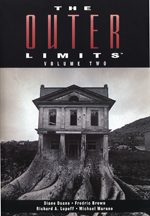 THE OUTER LIMITS: Volume Two
(Prima Publishing, 1997)
Edited by Debbie Notkin
Contents:
“Arena” by Fredric Brown (reprint)
“The Choice” by Diane Duane (a NOTer Limits)
“A Feasibility Study” by Michael Marano
“The Message” by Richard Lupoff (a NOTer Limits)
This volume perpetuates the stupid error that Fred Brown’s “Arena” has anything to do with The Outer Limits. 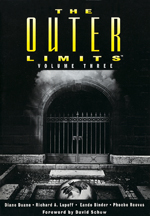 THE OUTER LIMITS: Volume Three
(Prima Publishing, 1997)
Edited by Debbie Notkin
Contents:
Introduction by “David Schow.”
“I, Robot” by Eando Binder (reprint)
“The Quality of Mercy” by Phoebe Reeves (a NOTer Limits)
“The Voyage Home” by Diane Duane (a NOTer Limits)
“The Forms of Things Unknown” by Richard A. Lupoff
In the Intro I detailed how I first presented the idea of Outer Limits novelizations to overwhelming publisher disinterest in 1979.  Apart from that, it was an exercise in holding the tongue and glad-handing.  Debbie Notkin asked me to write the Intro… but I was never asked to write any of the novelizations.  Plus — arrgh! — they amputated my “J.”  Prima Publishing was absorbed into Random House in 2003.

Armageddon Dreams by Kevin J. Anderson
(BSV Publishing, 1999)
Contents:
Introduction, “Working Beyond My Limits” by Harlan Ellison
“The Human Factor”
“The Man Who Was Never Born”
“Memories on Ice” (sequel to “The Human Factor”)
“Prisoner of War” (“companion piece” to “Soldier”)
“Soldier” script by Harlan Ellison
As Kevin says in the book:  “When the publishers asked me to do this book, they found my soft spot:  ‘Pick your favorite episodes, and do anything you want with them,’ they said.”
Since Kevin is a master of the tie-in and accomplished writer in his own right, this book is worth a gander for his skill at the flesh-out, or for those curious about the Further Adventures of Point TABU, or to see how he ramped up Andro’s adventure to the year 2015.  Each story is prefaced with a longish personal reminiscence that reads much like a “lost” WACT entry.  The Ellison intro — wherein Harlan apologizes to Joe Stefano for a misremembrance — is worth the price of admission all by itself.  A (formerly?) hard-to-find book but worth the hunt.
Posted by John Scoleri at 6:00 AM