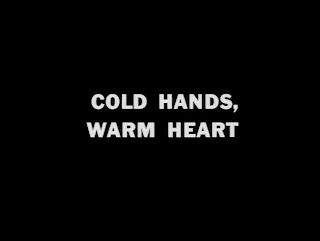 Colonel Jeff Barton (Shatner) returns from an apparent one-man trip to Venus and finds he can't get warm. He's also haunted by visions of a dancing creature with long hair. Well, I think that about covers it.
PE: It's...William Shatner... and later on this season I have to deal with Adam West... this is gonna be a looooong season.

JS: So we enter Season Two with new theme music (which certainly sings out, "This IS Sci-Fi!"). I know you've got a disposition to dislike Shatner, but let's face it, this is a dud despite him, not because of him. Whereas I find most of the things he did in this period entertaining, this episode only had one redeeming quality, and it wasn't him.


PE: Well, this one sure opens well, with a classic bit of Control Voice, capped by: It was not thought possible for man to reach Venus and come back. Until one day somebody did it. But I don't like the speeded-up "We are controlling transmission..." speech. Were they in a hurry to get back to Bill Shatner?

JS: Perhaps they started out thinking they were cutting to 30 minute episodes for this season. I wouldn't mind 30 of those minutes back... 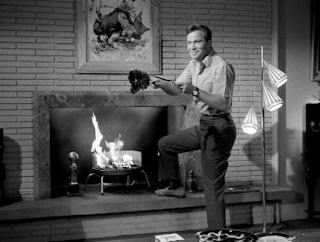 PE: When The Shat holds his steak over the barbecue and gives Geraldine Page some incredibly phony kisses, I thought maybe they should have called this "Warm Hands, Cold Heart."

JS: Allow me to show my bias of being a native Californian, where our idea of bad weather is the low 50s... but I couldn't quite get a handle on the whole barbecue in the fireplace deal. Of course he's gonna pass out—if he keeps it up they'll both be dead of asphyxiation!

PE: Whenever Shatner is going to feel cold, we'll know it not by his cheesy cardigan, but by the cheesy harp.

JS: I want to know how many folks watching the episode for the first time (and having seen Star Trek) immediately thought of Leonard Nimoy when they mentioned Project Vulcan.

PE: That is one hell of a fast little rocket ship Barton is flying to Venus in. Where's the refrigerator? Can he eat with that suit on? Um, where's the potty? Can one guy stay awake that long to pilot a spaceship? How does a rocketship drop sideways? Should I just give in and enjoy the nuances? 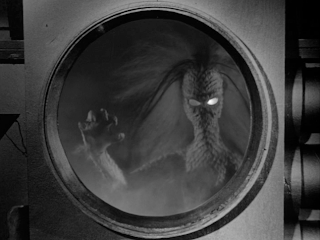 JS: I wasn't too worried about those details because we got a little more time with our muppet friend. While cool looking and certainly the high point of the show, it comes from the school of warm fuzzy creatures and less so from potentially menacing aliens.

PE: Okay, so say I buy the weird premise: guy comes back from Venus, can't get warm. So that affects his insides, right? Why doesn't the scalding hot coffee burn his tongue? Why doesn't the steam bath turn his skin red? Why don't his eyeballs fry like eggs in the 205 degrees of the capsule sauna? Should I just give in and enjoy the nuances?

JS: I'm not a _____-ologist (take your pick from the list read off over the phone as the credits roll), but I too would think a 100 degree swing in temperature is going to cause some problems beyond that which a nice warm coat and cup of coffee will solve. 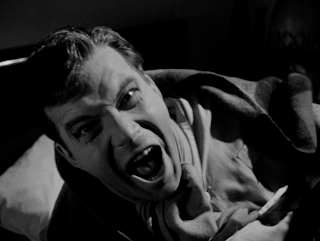 PE: As usual, William Shatner does the best with what limited gifts God gave him. He's no stunt man (witness his "tumble" in front of the fire place). He's no lover (witness the "kisses" he plants on Geraldine). He sure ain't no actor (witness just about any scene he's in but a classic would have to be his tantrum after catching his arm on fire).

JS: He has a couple of classic  Shatner moments, to be sure, but overall I just didn't think he was given much to work with,
PE: The usual display of Shatner emotion is displayed when prompted by a reporter:


Reporter (after asking if Venus can support life): Isn't that why you made the trip?
Barton: Not entirely although Venus is close to Earth it has always been a mystery to us and you can't take chances with mysteries when you're planning something like the colonization of Mars.

No breaks, commas, or breaths. Just a drone. 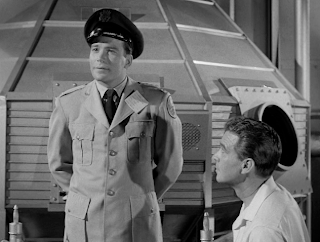 JS: I love how his access badge is pinned to his lapel like a note from his wife or mother. When we get TOL on Blu Ray, maybe we'll see a grocery list, "On your way back from Venus, can you stop off at the store and pick up eggs, milk and a loaf of bread."


PE: I don't know why I keep hearing that the budget for the second season was even lower than the first. Check out that massive parade that opens the show. They ain't cheap. Nor is the cashmere sweater The Shat wears in his deliriously over-the-top "is it cold in here" scenes.

JS: I'd say the rod puppet was probably a lot cheaper than the mask, hands and feet of his S1 counterparts. 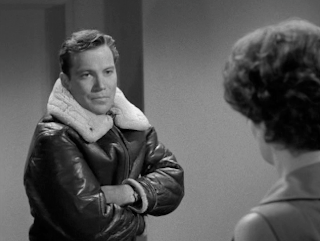 PE: If nothing else, "Warm Hands, Cold Heart" is good for several laughs: in an almost Saturday Night Live-esque set of scenes, we see the escalation of The Shat's shivers: cashmere sweater, bombadier jacket, Milton Berle checkered smoking jacket, scarves, heated blanket, bison pelts (Don't forget the Snuggie! -JS). It wouldn't be so funny if it wasn't for the fact that he continually puts this stuff on in layers. The show is nothing more than an excuse to dress The Shat up and have him play with dials (in this case, the heating dials). 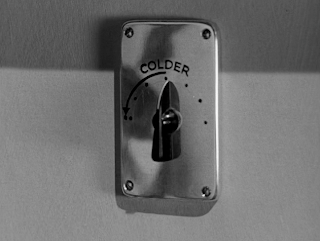 JS: Another finely labeled instrument from your friends at Projects Unlimited! Although I would imagine the fanciest tech on display in the episode was the TV remote. High-rollers, this astronaut and trophy wife...

PE: L-OL scene: Barton is entertaining a batch of bigwigs with General Claiborne (Gough), while Ann (Brooks) waits with friends in a lobby. Claiborne exits the room just as there's a roar of laughter. He shuts the door and faces Ann.


Claiborne: Did you hear them laughing?

Claiborne: He held up his...his hands for everybody to see. He asked them if they were wondering why he was wearing gloves. He said that he'd been all these years flying airplanes, spaceships, taking all kinds of risks. And the first night he's home safe on earth, he spills a whole pot of boiling hot soup on his hands.

(more laughter and clapping from the room)

JS: I didn't quite get the point of starting the scene on Shatner, closing the door, dealing with nothing important outside, only to have the General come out and describe the scene we just missed. Wouldn't it have been easier to just film the scene in that room instead? The writers from Season One would have had a field day coming up with mouthfuls of scientific mumbo-jumbo for Shatner to spew.

PE: I never knew Geraldine Brooks was young once. And did James B. Sikking age one day in the 17 years between this and Hill Street Blues? Malachi Throne (Doctor Mike) went on to become a respected TV veteran, best known for his two year stint as Noah Bain on It Takes a Thief, co-starring Robert Wagner. Sharp genre fans know that Throne also appeared unbilled (and always under heavy make-up) as False Face on the Adam West Batman. Throne gets one gem of a line this show: "Where's the nearest steam bath?" 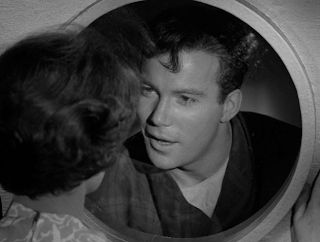 JS: Perhaps I'm crazy, but I kept getting a "Nightmare at 20,000 Feet" vibe from this episode, particularly in that we kept seeing Shatner through windows. And the '20,000 feet' reference in the script can't just be a coincidence, can it? Of course  I personally find the Venusian (or Geraldine Brooks for that matter) more terrifying than the Gremlin from The Twilight Zone.

PE: This crap gets exactly one-half Zanti from me and that one-half Zanti is for the creepy floaty Venusian pineapple head with hair. It doesn't seem to have much range of movement but it's still a great Bear. I'm not sure what function it served though. Just a "bear" for the network brass?

JS: For me the real giveaway that we had a regime change was The Shat's fate. No way does a guy turned half Venutian get rolled back to full human on Stefano's watch.
JS RATING: 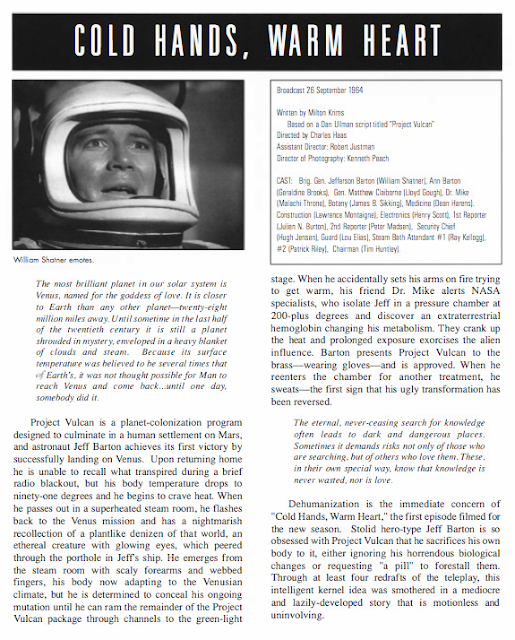 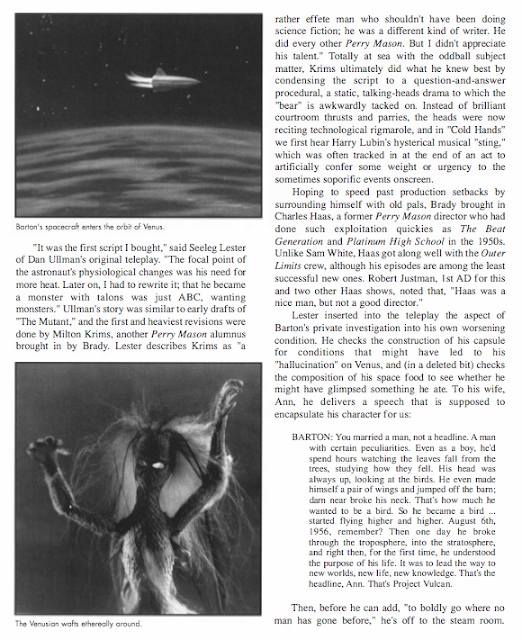 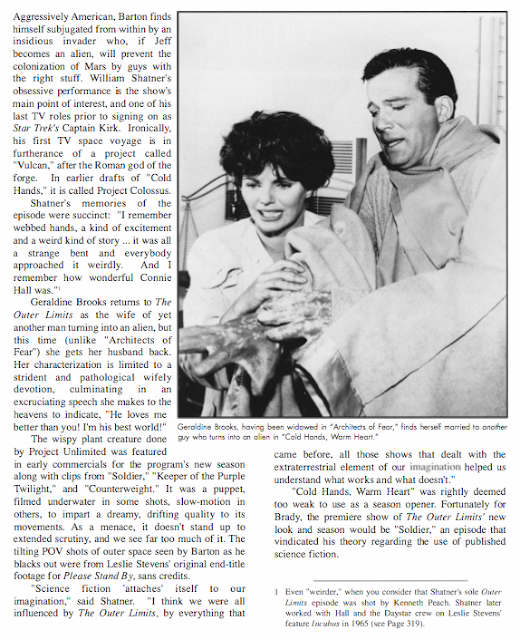 Be sure to check back later today for Peter Farris' Spotlight on "Cold Hands, Warm Heart."