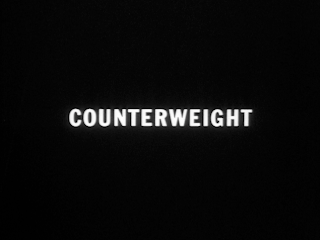 A group of strangers are brought together to see how folks will handle the isolation of a lengthy spaceflight. The real experiment was designed to see if viewers could survive the physical and psychological stress of 50 minutes of this episode.

JS: I was so utterly impressed by the dynamic shot of the spaceship flying towards and then away from the camera, it quickly dawned on me that it must have been lifted from something else. Once again we've got DJS to the rescue; the credit goes to George Pal's When Worlds Collide.

PE: I've heard this particular episode has a very bad reputation. I'm not sure why as I zzzzzzzzzzzz...
JS: What? Joanna Frank—where??? Oh... WAKE UP! 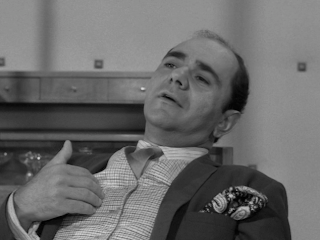 PE: I love Michael Constantine... most of the time. Here he's deliriously (as opposed to delightfully) over the top with his "dems, dese and dose," now you see it now you don't, Brooklyn accent.
JS: He does give a performance second only to an inarticulate fanged asparagus puppet. Although amongst this ensemble, even that's not much of a compliment. Tell the truth—it was his space jammies that won you over, right? 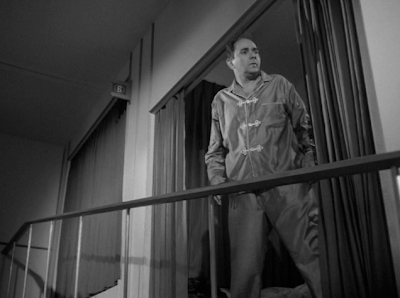 PE: I think someone had been watching a little too much Rod Serling and thought, "Why don't we give this thoughtfulness a shot." I hadn't gotten this vibe from any of the other episodes we've covered. The show's got most of the earmarks of a Serling TZ morality play: flawed characters, claustrophobic surroundings, an unseen menace, "deep, insightful dialog." Only thing missing is a good story and execution. Other than that, it's a Twilight Zone. Consider the pilot's observation on the greatest danger of space flight:

Captain Branson: The greatest danger? I don't know. There are so many. Maybe the worst are the ones we make for ourselves by seeing things that don't exist except in our own imaginations.

JS: And yet it lacks what Serling consistently delivered on TZ; entertainment value. When Serling wrote an episode like this, he would never spill the beans (as to the whole thing being an experiment) in his opening monologue. One can argue that such a surprise might have given the episode some dramatic weight, although I think you could just as easily argue that it would take a heck of a lot more than that to salvage this mess.

PE: Ouch! How awful Dr. Hendrix (Scott) must feel, spurned by Dr. James (Crahan Denton), a man old enough to be her pop. Of course, a woman anthropologist  (especially one on The Outer Limits) might not make me randy either. Would she bring a skull and pick axe to bed with her? Ask you to drag her across the bed by her hair?

JS: I think you may be thinking of an archaeologist. If you are in fact mixing up your -ologists, I blame that damn "Cold Hands" (which is sadly looking pretty watchable today...). 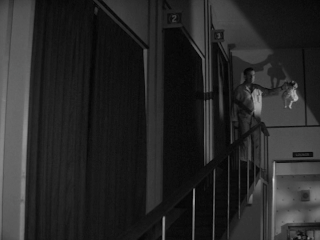 JS: Ah, if I only had a nickel for every time I heard that. I do love how he holds up the doll, to no one's view but us. What, is he threatening to drop it if we don't fess up?

PE: My L-OL moment of the show, no, perhaps the season: Dr. Hendrix, after the aforementioned spurning decides to get gussied up (a scientist's idea of gussing up, that is),  puts on her best push-up bra, undoes a couple buttons on her overalls, twirls her pearls and looks for a man amidst the professionals. This leads to even more deep, soul-searching dialogue. When she's scolded for mocking Dr. James' doll ("He has reason for loving that doll just as you have reasons for wanting to be a woman"), she lets loose:

Hendrix: But I don't know how. I must find out before it's too late. I never thought of it until just now sitting here with nothing to do. Nothing. I'm strong. I'm trained. I have a disciplined mind. I must...work to forget the children I've never had.

Maggie: You come to my cabin for a rest.

Hendrix: You're very pretty, Maggie, but you're cold as a robot. I'm much more woman than you.

JS:  That reminds me so much of the scintillating conversations you and I so often have... 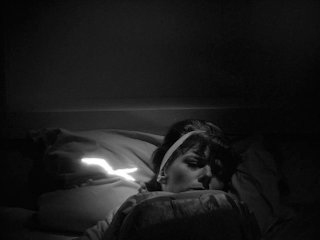 PE: I've seen the word "nadir" bandied about on this blog a few times in the past. Nonsense. This is the "nadir" of The Outer Limits. I defy anyone to tell me there's a worse, more boring show on the horizon. Our highlight is the protracted voyage of the "little floaty rattlesnake," which makes pitstops into several passengers' ears. We're treated to innermost thoughts ("I am a woman scientist. Hear me roar") and Constantine's snoring (or was that mine?) along the way.

JS: Just imagine if the light-snake was the bear this episode... talk about no-budget. 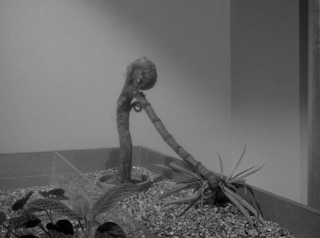 PE: The only bit worth championing is the stop-motion plant. It's very cool, and foreshadows the kind of work Jim Danforth would later do for Equinox,  but it lasts only seconds. Unfortunately, the powers-that-be decided the plant should talk too. And talk without moving its mouth! And what the hell is with that climax? Or should I say anti-climax? What a miserable Christmas present to find under your TV tree in 1964.
JS: I too love a good stop-motion sequence, and  the plant wrestling match was without a doubt the high point of this episode.
PE: Lots of genre and television vets here: Constantine cut his teeth in a wide range of classic TV (The Untouchables, Twilight Zone, Voyage to the Bottom of the Sea, Perry Mason, My Favorite Martian, etc.) before becoming a regular on Room 222. Jacqueline Scott, of course, was the shrewish wife on our maiden voyage, "The Galaxy Being." Charles H. Radilak appeared on The Man from U.N.C.L.E., The Girl from U.N.C.L.E., The C.A.T. and lots of other C.R.A.P.. Larry Ward was a regular on the short-lived The Dakotas, but is famous, to John at least, as the voice of Greedo and Jabba the Hutt. Crahan Denton was the sheriff in "The Children of Spider County" and also "Pigeons from Hell" (Thriller).
JS: BTW - Pete's not kidding about Ward voicing Greedo. How cool is that? In closing I'd like to give a shout out to my pick for OL Babe of the Week, Athena from Antheon! Smile pretty, Athena. 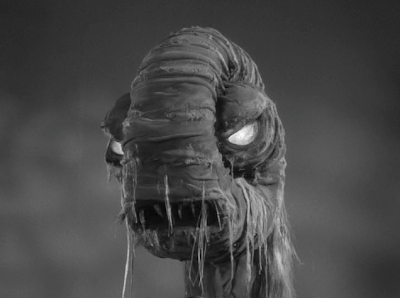 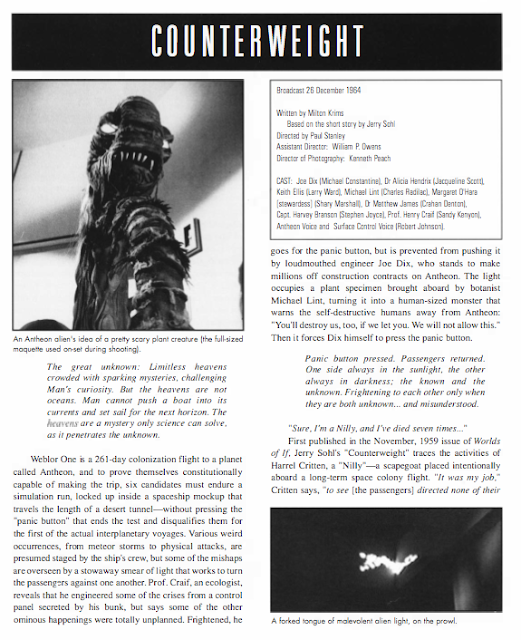 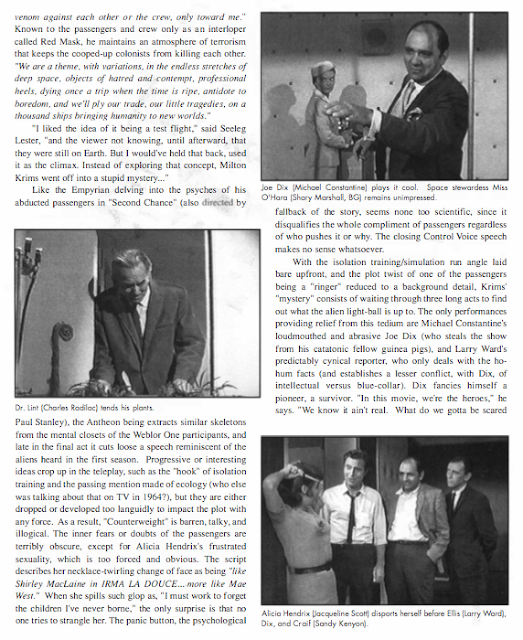 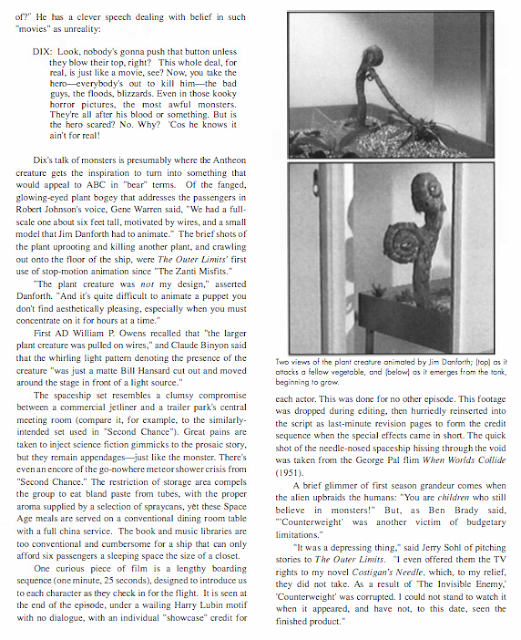 Be sure to check back later today for Matthew R. Bradley's Spotlight on "Counterweight." 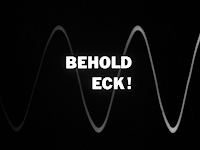