The Forms of Things Unknown 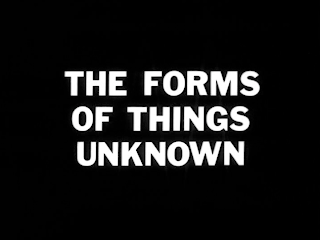 Broadcast Order #32
Original Airdate: 5/4/64
Starring Vera Miles, Barbara Rush, David McCallum.
Written by Joseph Stefano.
Directed by Gerd Oswald.
Sick of his domineering and abusing ways, Kasha (Miles) and Leonora (Rush) poison Andre (Scott Marlowe) and dump his body in the trunk of their sports car. Looking for a place to bury the body, they stumble onto the house of a strange blind man (Sir Cedric Hardwicke) and his even stranger housemate Tone (McCallum). Tone is experimenting with ways to bring the dead back to life... and having a bit of success as the girls soon find out.
PE: Answers the question; what if Shakespeare had lived to write an Outer Limits? I'm not even going to pretend to know what the hell is going on this episode. It looks good, that's a plus. It's got a killer cast, a big plus. It's too long and plodding. Minus. The dialogue is too pretentious. A big minus. Back at square one.

JS: As detailed in today's excerpt of The Outer Limits Companion, there are two versions of this episode—the OL version and the pilot version of The Unknown. Oddly enough, in the gothic version,  Andre didn't really die from poisoning. And that's the main reason I prefer the OL version. 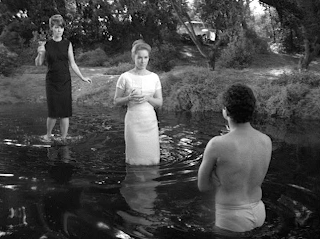 PE: "Forms" has a first act sure to grab you. Very reminiscent of 1960s independent cinema (and including, of course, a heaping helping of Diabolique). The kiss. The freeze. The kinky three-way (well, it's not shown but shore is implied!). Andre's trek into the lake. (and it looks like Robert Plant took lessons from Scott Marlowe on how to pack his pants). The plan. The execution. It's all very effective. Too bad the story soon goes off the rails. Despite the story problems and its roll-your-eyes dialogue, this had enough good bits and shots to warrant a thumbs-up. Kasha and Leonora, icy breath and all, arguing in the rain. All those snazzy camera moves. One of Frontiere's finest scores. And what's the business with the traveling coffin? 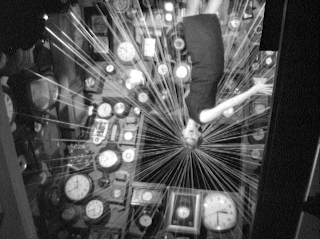 JS: I'm sure it means something—I'll let the experts expound on that. I accept it as yet another one of this episode's interesting visual touches. Like the transition from the flower thrown by the gravedigger to the raindrop hitting the windshield. And dare I say the coolest machine in the history of The Outer Limits? There's something about all those clocks and the spiderweb/harp that visually exceeds the need for it to make any practical sense.

PE: Even better than War of the Worlds sound effects, we get its narrator, Sir Cedric Hardwicke!

JS: That's Mr. Brink to you! While I like Hardwicke, I couldn't quite figure out what his purpose was in the episode.

PE: The European roads and hillsides look just like the ones in Southern California!

JS: Again, I'm willing to pitch such logic out the window and enjoy the (wild) ride.

PE: Vera Miles' performance as Kasha reminds me a lot of Olivia deHavilland's in Hush...Hush, Sweet Charlotte (which didn't arrive in theaters until seven months after this episode was televised). She's strong and dangerous and she'll do whatever she needs to do to get what she's after. Her scene with the resurrected Andre is quirky, as if she's forgotten she murdered this guy just a few hours before. 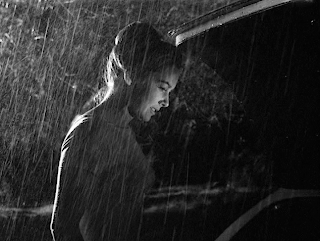 JS: I'll go a step further. In addition to Miles' performance being the standout one in this episode, I'm convinced hers was the standout performance of the season. I thought she was dynamite in the role of Kasha. I particularly liked the way in which she casually cleaned the decanter in the lake after the poisoning, and how when she went to investigate the open trunk, she approached it with a smile on her face. There were numerous nice touches throughout her performance.

PE: Miles is top-notch but her co-star Barbara Rush almost seems to be sleepwalking at times. Her laid-back nonchalance (and that annoying way she runs with her hands upraised oh so primly) is the yin to David McCallum's ham yang. On loan from The Globe theater where he was performing a one-man show of A MidSummer Night's Dream, McCallum makes lines like "I imagine Hell will be glad to take you back. You're one of its own" with frightening sincerity but he's one goofy-looking fuck when he's loading that gun. 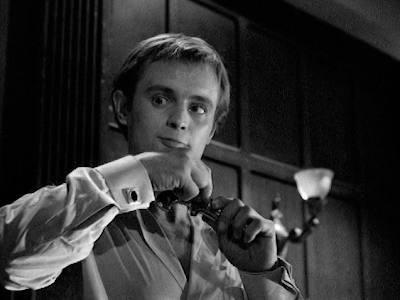 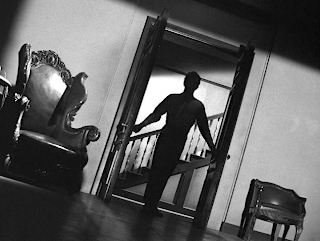 JS: I too wish Rush was on par with Miles, as this episode would have really benefited from a female pairing akin to "Bellero's" Kellerman and Rivera. And yes, McCallum had better material to work with in "The Sixth Finger" than he's got here, although he does sell eccentric with the best of them, Another favorite shot of mine is his introduction; the Dutch angle silhouette.

PE: As I've noted before, I don't pay too much to the soundtracks but this one really stands out. It has just the right jolts (and Psycho steals) to compliment the goings-on.

JS: While I generally agree with that assessment, I thought the final queue (post McCallum's disappearance), was inappropriately upbeat. I felt "The Unknown" did it better.


Andre: I have planes and boats and villas and jewels. All the cacophonies of which beggar boys groan with insecurity. I am rich. But I am noisy rich, Kasha. And I want to be quietly rich.

Kasha: You have to be heir to that, Andre. You can't be born in the sewers of a noisy world and grow up to be anything other than a noisy sewer-minded man.

Andre: You have pierced the heart of my psychic disorder.


Tone: So many loved people have died, Colus. In my time and before my time. And it seemed to me all those endings were untimely. I worried about what would become of all the love left over. 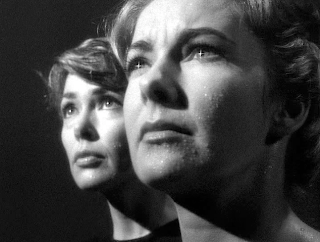 JS: This episode is definitely avant-garde, and while I enjoyed the visual style, the narrative left much to be desired. But it's hard to deny that Conrad Hall was at the top of his form (as any of today's screen captures will demonstrate). Just look how he got the sparkle in Kasha's eyes as they spot the string of lights  leading to Tone's lab (click on the image for a larger view).

PE: My opinions of a lot of the episodes we've looked at so far vary differently through eyes aged 40 some odd years. That's a positive and a negative. "Zanti" wasn't quite the classic I'd remembered, but "The Sixth Finger," an episode that had too much talk for my tastes when i was a youngster, really shone. When I was ten years old, "The Forms of Things Unknown" had me playing with my Legos within ten minutes. As an adult, it took me thirty minutes before I brought them out. In the end though, this is a perfect example of style over substance.
JS RATING:

David J. Schow on "The Forms of Things Unknown": 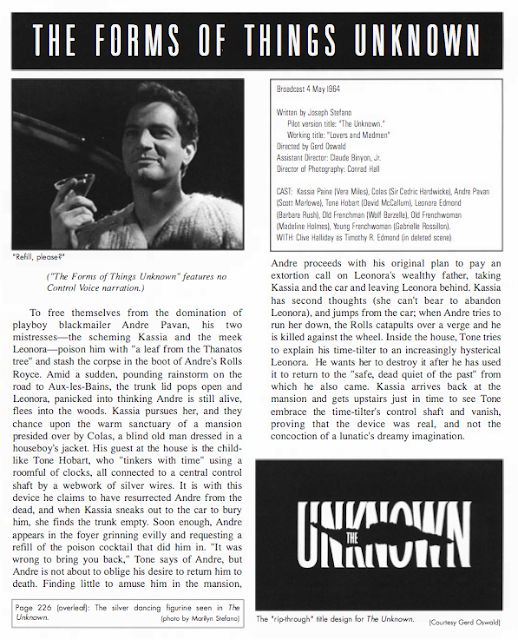 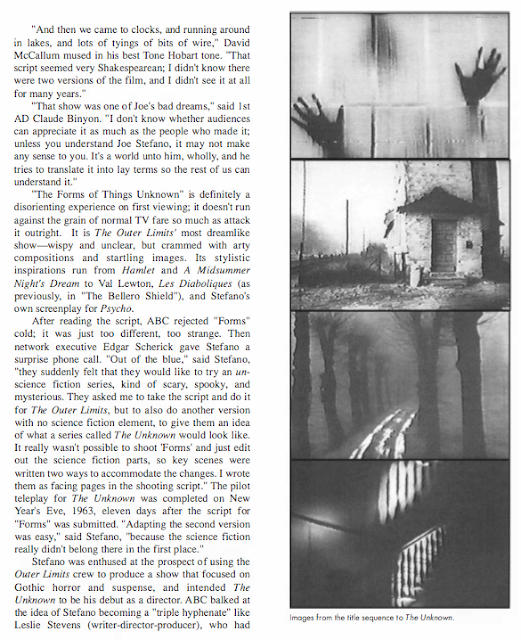 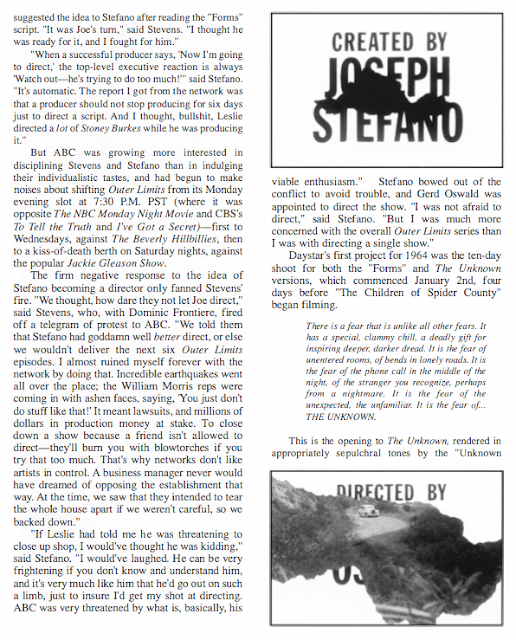 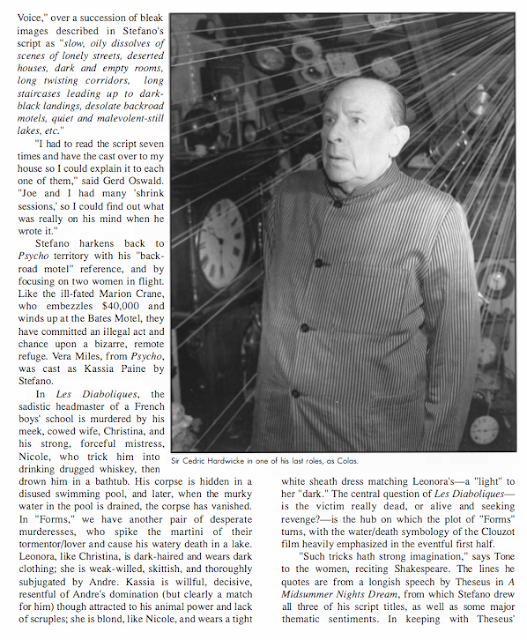 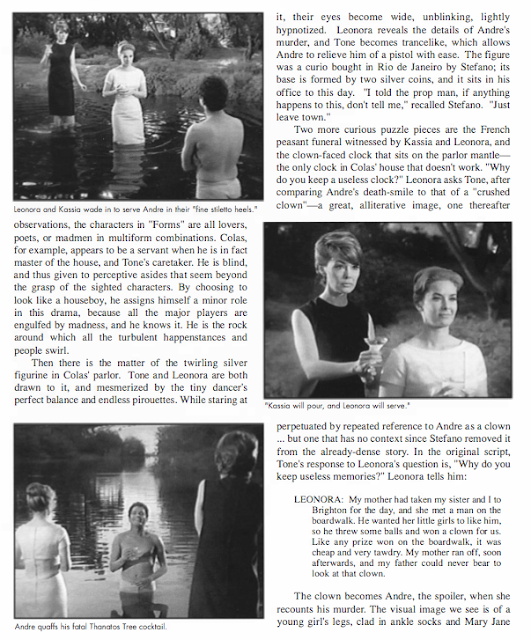 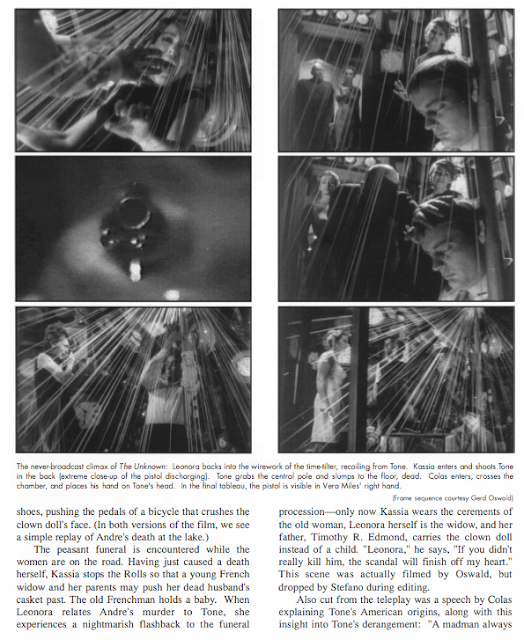 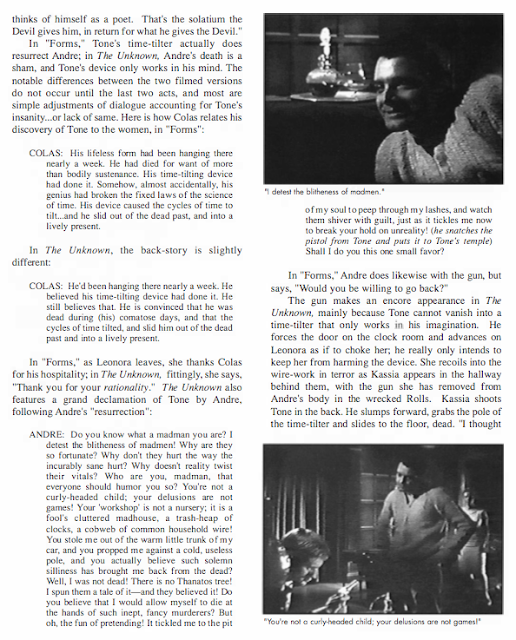 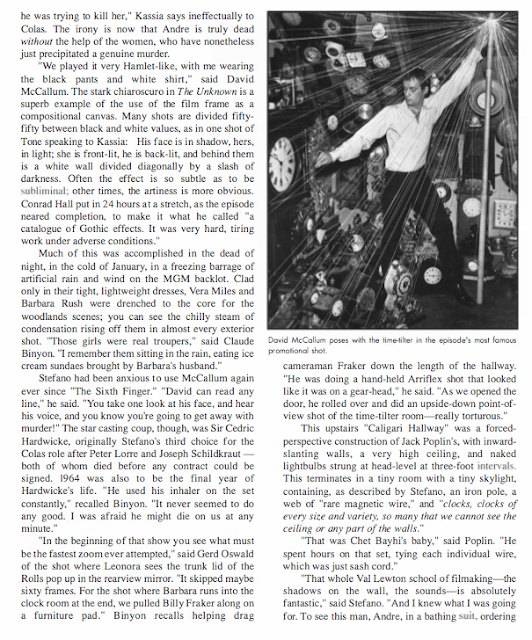 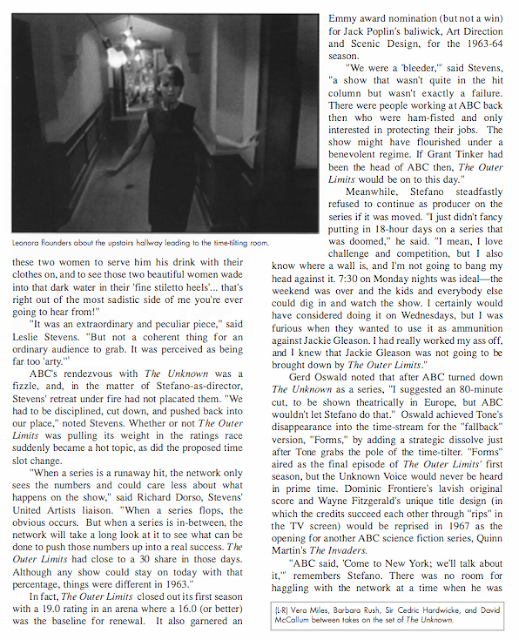 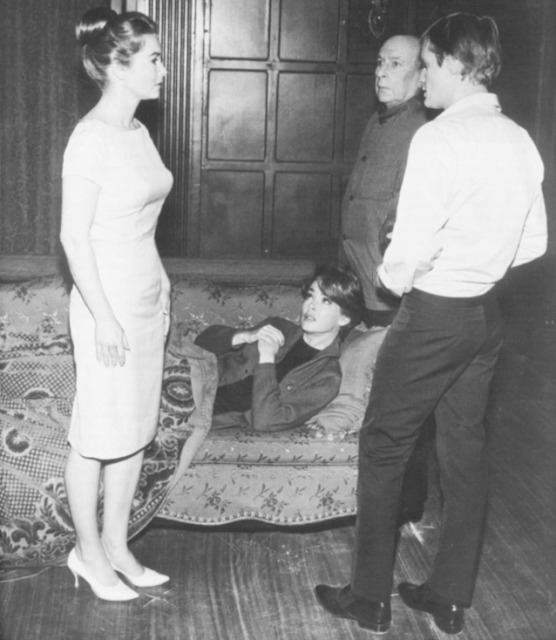 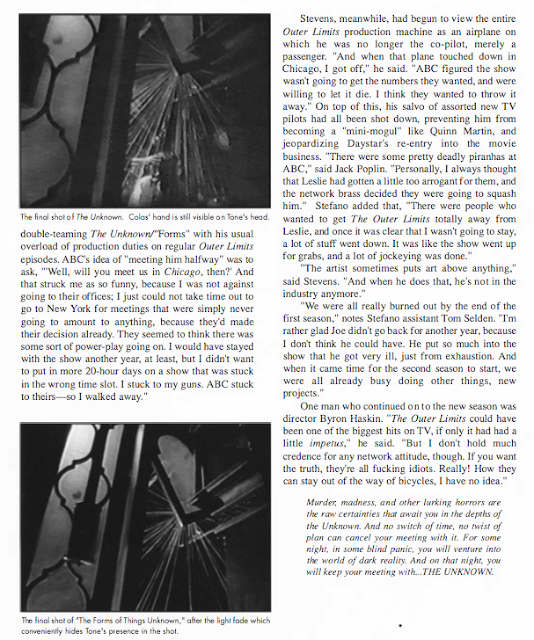 For our Southern California fans, don't forget that next Friday, February 25 at 7:30PM the UCLA Film and Television Archive Presents a Free Admission double feature of: 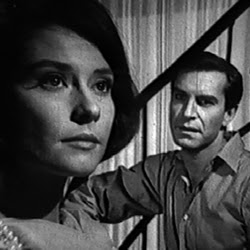 THE HAUNTED
(a.k.a. The Ghost of Sierra de Cobre)
(1965) Directed by Joseph Stefano

Martin Landau stars as a Los Angeles-based architect-cum-paranormal investigator who specializes in assessing and exorcising old homes. Stefano here weaves together vengeance, hallucinogens and a “bleeding ghost” in a gothic telefilm that was deemed too frightening to air by network executives. Stefano's only directorial effort, this extremely rare pilot never aired in the U.S. 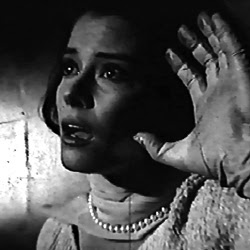 THE UNKNOWN
(1964) Directed by Gerd Oswald

With nods to Psycho and Clouzot’s Diabolique, The Unknown unleashes sadism and madness when a wealthy playboy lures two unsuspecting women into a house of horrors. With its nightmarish tone and art-film cinematography, The Unknown pilot was considered too off-beat by ABC and was retooled as an episode of Outer Limits. The original pilot is being screened tonight from a rare 35mm print.

IN PERSON: Marilyn Stefano and our own David J. Schow (author of "The Outer Limits Companion)"

Be sure to check back later today for Gary Gerani's Spotlight on "The Forms of Things Unknown."