Aficionados of the Outer Limits Companion will note that a book’s “structural integrity” is sometimes a dicey thing.  Most recently, whitsbrain noted this pestersome fragility in the Comments — as have others. 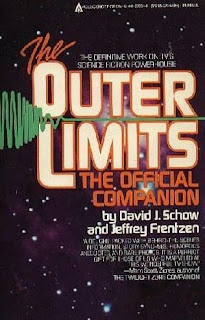 In 1986, I really had no idea what would come back my way once I had sent a box of manuscript and a box of photographs off toward Bigass New Yawk Publishing.  Ace/Berkley’s cumbersomely-titled The Outer Limits: The Official Companion was predictably under-designed to mimic Marc Zicree’s Twilight Zone Companion in size and shape, which explained the nondescript starfield used for the background.  That “Official” in the title cost Ace a cool $2000 per syllable, by the way.
Advantages:  The book would lay open no matter what page you turned it to.  The entry-level, one-step-up-from pulp paper made it a featherweight item for shipping.
Disadvantages:  That same shitty paper would fox in a heartbeat — that is, turn brown.  (“Fox” from the color of the stains acquired by aged paper.  It doesn’t hurt the paper, it just makes it look ugly or vintage, depending on your taste.  Heavy acid-content paper is susceptible to sunlight, which does destroy its integrity by wiping out its lignin [wood component; organic].)
Really Huge Disadvantage:  No quality control over photo reproduction, layout, or anything.
As Tim Lucas pointed out in his review of the book for Video Watchdog, the real advantage of the earlier edition was that many of the participants — Outer Limits cast and crew — got to see it before they died.  Some saw bits and pieces in the eight-part series of articles I did for Twilight Zone Magazine, (1982-85), which were fundamental in nailing down the book contract.  After that, I did another 2-part “bullet version” of the show’s history (with episode guide) for Epi-Log Magazine in 1993, followed by an enhanced version for Video Watchdog in 2002-03. 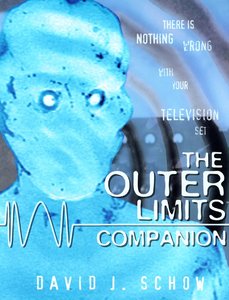 As illuminated in the Frank Garcia interview, 12 years after the first edition, Neil Norman of GNP/Crescendo Records underwrote the second edition.
It comes apart if you read it too much — it’s a huge trade paperback on heavy paper without the advantage of a Smyth-sewn binding.  The simple glue binding cannot withstand extended use.
Advantages:  I got to do the entire layout, warts and all.  The paper looks as good today as it did when the books first rolled off the line.
Disadvantages:  It weighed nearly five pounds, and tended to disassemble.  One thing we did not foresee was the prohibitive shipping cost of such a weighty tome.  (Pick up five pounds of apples or dogfood the next time you’re in the store and see what I mean.)
Neil and I had planned on a limited hardcover version, about 100 copies.  That plan got scotched when we saw the paper stock that was part of the original printing deal — it was thin and nearly transparent, like a cheap catalog.  At the last minute we had to cough up eight grand for better paper — 85-pound, semi-gloss, velvet-finish stock — which was gorgeous… but there went the hardcover.
The book’s weight also caused the edges and corners to suffer heavy damage in shipping.  A box of books from the plant was 13 copies — over 60 pounds.  I triaged out some damaged copies to resurrect them for a “ding and dent” sale, and thus won my first experience with rebuilding what I had already built… again.
It’s fairly easy to peel the entire cover off intact, especially if the book has already begun to pull itself apart.  First test:  True the pages in a vise and lay down a new binding with Gorilla Glue, which foams up and has to be trimmed away when dry.  But the new binding is still a glue binding, and will still crack eventually, leaving the spine a webwork of white fissures.  Next:  I tried bonding the page block with a fabric strip that folded around its edges.  Better … but now the book looked as though it had been manhandled by a library, and the page weight would still cause the bond to crack.
For my reference copy — the one where I record all the typos and corrections — I took the book completely apart and installed it into a 3-ring-binder, which works, although it’s ugly and unwieldy.
I experimented with a couple of damaged copies, having a bookbinder punch through the extreme bind edge to sew the pages together in signatures, then secure the whole thing into a laminated version of the trade paper jacket.  That’s more durable, but it wasn’t built to do that, so it flops open in clumsy ways and looks more than ever like a defrocked library book.  (We didn’t allow for an interior trim line so there wasn’t a lot of space to work with as an “anchor” for the pages.  Anchor too deep and the gutter starts crowding the text, so you’re forced to “read over” the page curve.)
Still, a good bookbindery is the best way to go for preservation.
Just this past year, since the 1998 edition went out of print, discussions have begun on a possible new printing.  It might be a reprint of the 2nd, and it might be a “true 3rd” with updates and changes… which means a new layout… which means… gasp…
Part of the discussion involves keeping the book affordable.  Another part concerns going whole-hog and making it a Cadillac, which would easily cost $100 per copy or more.  A good strategy these days is to amortize the cost of a cheaper trade edition by doing a limited hardcover edition.  All these options are in play.
You, the reader, have sampled some of the wonderfulness of a new edition via WACT, and so the question should be put forth:  What do you wish to see?