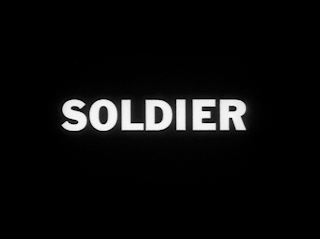 
On Earth, sometime around the year 3765, two armored gladiators prepare to do battle on a barren wasteland. They are both trapped between beams of light and transported back to present-day Earth. It's only a matter of time before they meet and finish off their grievance. 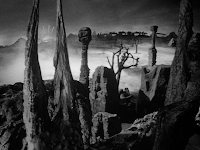 JS: The opening shots of the desolate post apocalyptic landscape really do a great job of setting the tone. That said, it does strike me as odd that two opposing soldiers with rifles would approach each other on the battlefield for what—hand to hand combat? 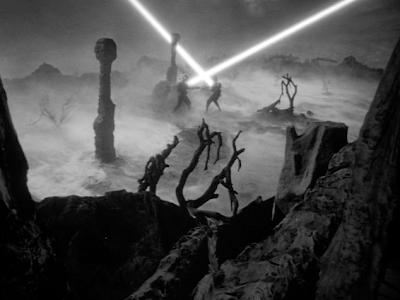 PE: A fascinating aspect, to me, is that you're not sure from the intro on which character, Qarlo or The Enemy, is the "bad guy." Neither one is sympathetic and we don't know enough about the environment they come from to make an informed judgment. Nor do we know what year they're fighting in. The field they're battling on resembles 2011 Detroit but I have a feeling writer Harlan Ellison meant for it to be a bit more far-flung.

JS: Not to get philosophical, Peter, but on either side of any war, soldiers don't considers themselves the 'bad guys.'

PE: Did the old magazine guy die from a heart attack or did Projects Limited miss a cue? Is The Enemy actually stuck in a dark field with no legs? Are his legs in another dimension? I've got questions here.
JS: I was willing to accept the split screen Enemy, but the problem I had with it is he appeared to me to be in the future battlefield setting. Overall, I was very impressed with the production design and photography in this episode. And the music cues hint at the ever present threat that Qarlo represents.

PE: Did Harlan really write the exchange between Tanner (O'Connor) and Kagan (Nolan) or was there some meddling from the Top Brass?:


Tanner: It took six beefy men to put him in the two straitjackets he's wearing and they send down a philologist.

Kagan: Well, I do know a little karate.

Tanner (rolling his eyes and making a goofy face): Oh, say, Kagan, you're a real knee-slapper. 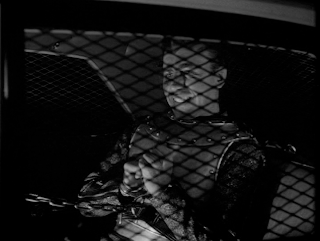 So, six beefy guys got him into a straitjacket but no one thought to sedate Qarlo and remove his armor?
JS: They didn't need to take off his armor. In this town, the police cars are equipped with chains to keep unruly suspects under control. As for the dialog, I can confirm that the exchange exists in Ellison's preferred version of the teleplay (The Outer Limits: Armageddon Dreams, 2000). An interesting side note about Kagan—as the go-to philologist in OL-land, he was on the list of folks being called at the end of "Cold Hands." 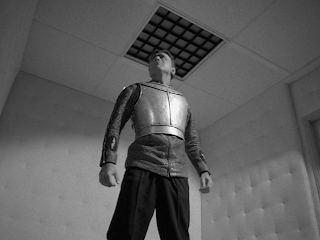 PE: The first half of the show is strong. Lots of good bits: An engaging set-up; Qarlo locked in a padded cell,  pacing like a caged animal; Nolan's strong performance as the doctor who's convinced he can get through to the hulking beast (my generation probably remembers Nolan best as Diahann Carroll's boss on Julia); the homage to Bride of Frankenstein ("love, good...hate, bad"). The second half slows things down a bit with a lot of psychobabble about love and the human condition (or something like that) and the inevitable showdown between Qarlo and The Enemy is dynamically staged and then over in a heartbeat. Who the hell decided us kids would want to hear grown-ups pondering emotion and our dark side for 48 minutes rather than a good ass-kicking delivered by Qarlo?

JS: While Ansara does an amazing job—watch the way he reacts to the harsh ambient sounds once his helmet is off—to me the episode succeeds on the strong performance of Nolan, and his soothing, Howard Cosell-like delivery. Like Edward Andrews in Thriller, Nolan is just entertaining to watch in any circumstance.

PE: How in the hell did Kagan come to the conclusion that Qarlo is speaking English? Nolan has a particularly far-fetched conversation later with Tanner wherein he drops the bomb that he "thinks he talked" to Qarlo:


Tanner: You think you talked?

Kagan: He's from the future, Paul!

Tanner (astonished): But how?

Kagan: Well, he doesn't really know. In his time, they fight their wars with beams of force, laser lights, now somehow he got caught between two of them and the next thing he knew...

Tanner: He was here...in the present.

Kagan: No, correction, he was here in the past...his past...our present.

He got all that out of a "maybe talk" with the big guy? 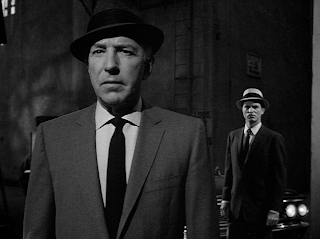 JS: Philologist, Peter. Phil-ol-o-gist. I'm surprised I have to explain these things.

PE: Despite all my picked nits, this is a decent show, with standout performances by Nolan and Ansara, the latter of which perfectly personifies a human beast. It's admirable that, but for a couple quick scenes, Qarlo maintains that rage and nastiness. There's no payoff scene where misunderstood Qarlo rescues twenty children from a burning orphanage and then returns home to bake a cake for Mrs. Kagan and the kids. The viewer gets the feeling he may just pick up the fireplace poker and put it through Kagan's annoying little moptop at any moment. And there's an iconic shot, for me, in the climax when The Enemy appears and hops over the ring of fire. Very exciting moment. You almost think you're about to see a battle royale (rather than a carpet tussle). 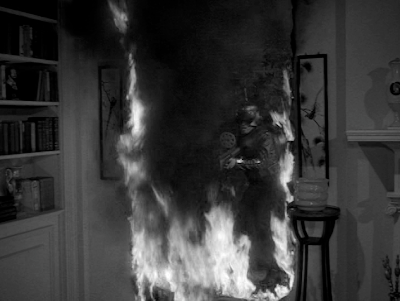 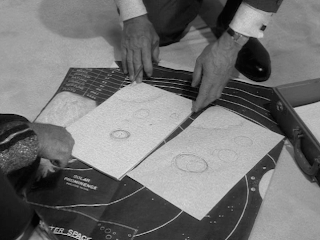 JS: When you consider they could have used this as a launching point for a sitcom (Make Room For Qarlo!), I think we got lucky. If I did have to pick a L-OL moment from the episode, it's when Kagan mentions that it took someone at the Naval Observatory hours to plot Qarlo's planetary drawings. Thank goodness they weren't done in crayon—they might have taken years to decipher.

PE: Although I've never seen this episode of OL before, it seems very familiar. If I didn't know any better... 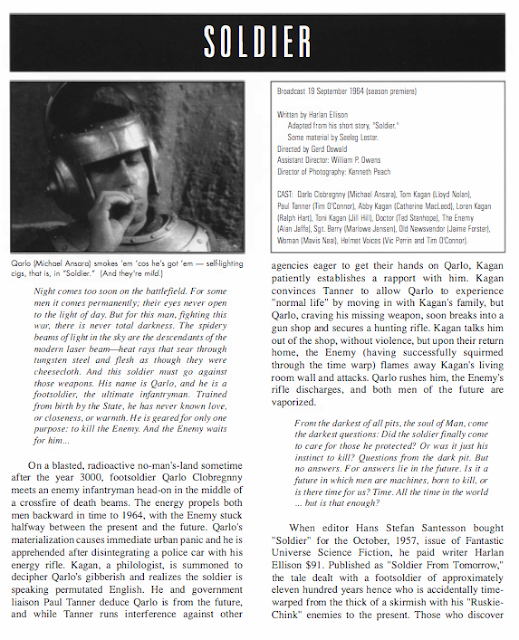 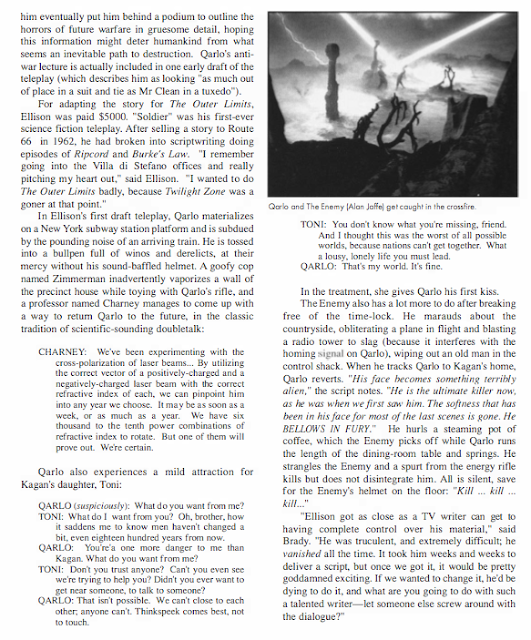 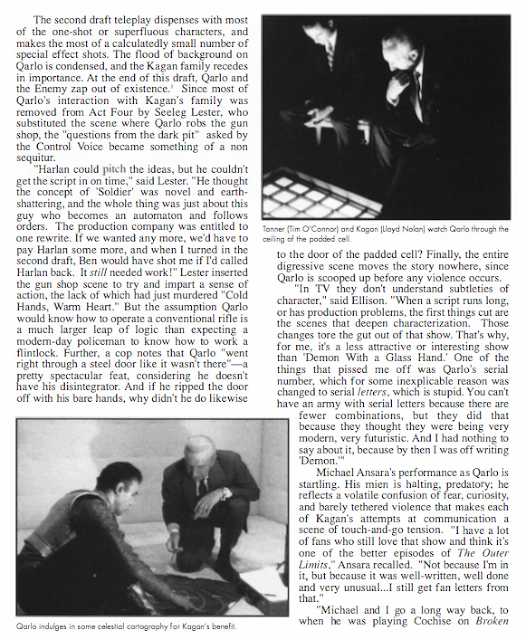 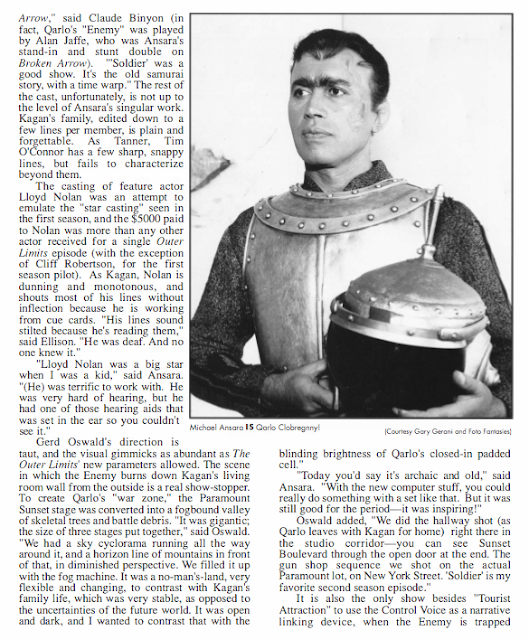 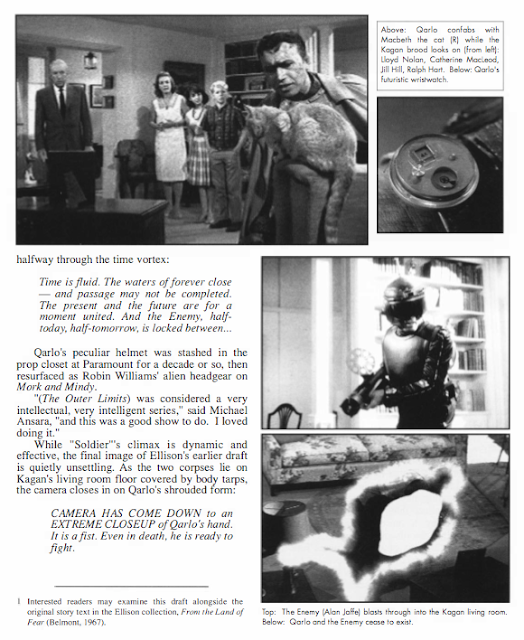 
Check back later today for a Spotlight on 'Soldier." 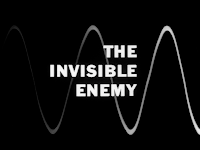