Spotlight on THE SENATOR!

Oh, just glorious, a fucking MISCREDIT.  The kind that renders my entire book invalid, whereupon legions of booger-flicking nimrods could declare their superiority to the world because I got caught in a mistake.  It happens.  One learns to cope.
So who played the Senator?  Who got his voice replaced, by Stefano mandate, with the sonorous and lusty tones of Robert Johnson, Daystar accountant by day, on-call monster vocalist by night? 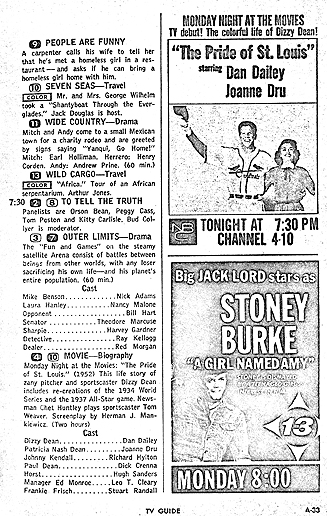 The TV Guide listing had it plain as a punch in the face:  THEODORE MARCUSE. 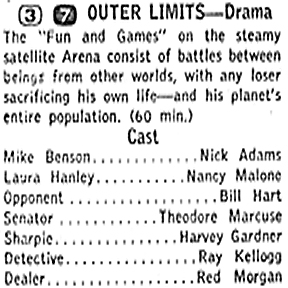 But that could have been a miscredit.  Or an outright error.  TVG sure as hell could not prove or disprove, and what, you think TVG was infallible?  (TVG was the same place that began perpetuating that Fredric Brown nonsense, but only after the Star Trek episode “Arena” aired.  Not good enough.  I love Brown too, but this was achingly ridiculous and wholly unsupported.)
I needed more proof, and nobody could recall “who the actor was.”  Why should they?  He got replaced, at least vocally.  Bad actor; no donut.
Even worse, I had a shooting schedule for “Fun and Games” … but lacking the call sheet, which was usually stapled just under the title page.  Senator here, Senator there, Senator everywhere, and not a clue as to who was under the mask.  I should have known; this was during the period when legitimate actors (Simon Oakland, for example) were petitioning Stefano to play the monster parts, so the casting of an actual actor would have been less surprising.
Then, one magical moment a few weeks ago, I got a peek at THIS: 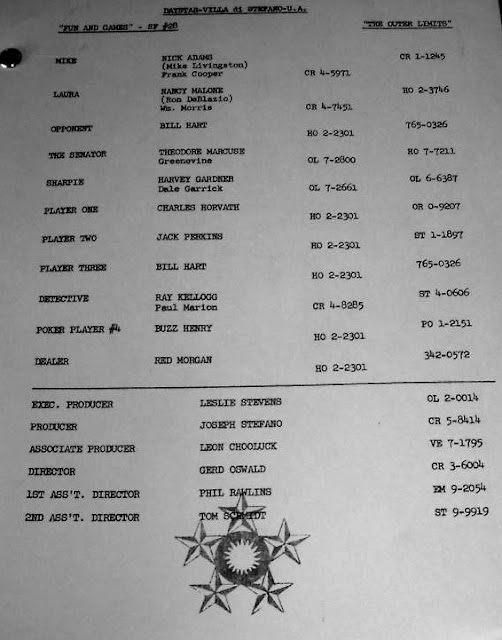 Yep, it was Theo, all right.  Confirmation at last.  I, too, had spent far too much time reviewing the poker scene, trying to force-fit my mental image of Theo into one of the players.  His credit was a dangler; it didn’t fit anyplace else, despite the fact that none of the players looked like this: 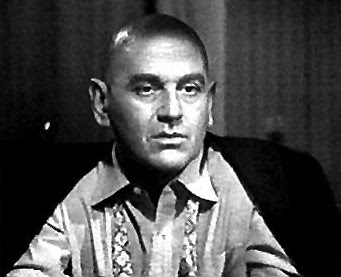 Even more confusingly, Theo had played card dealer Mr. Farraday (as “Ted Marcuse”) in the Twilight Zone episode, “The Trade-Ins.”  He died at the tragically young age of 47 (on 29 November 1967) from injuries sustained in a car crash in Hollywood.  As a naval lieutenant aboard the submarine Tirante in WW2 he had earned a Silver Star, a Bronze Star, and a Presidential Unit Citation for his heroics, and he had a Master’s Degree in Classical Literature from Stanford.  He was a fixture on The Wild Wild West (in three episodes), which is where I first noticed him.  More recently those of us here in the Outer Limits Bar & Grill took note of him as “Arthur Upshaw” in the Thriller episode “The Man in the Cage.”
And Then Came Johnson.  Bob Johnson.  Who proved to be one of the greatest delights of the entire Outer Limits interview gauntlet.
I cold-called the only “Robert Johnson” I could find in Kaunakakai, Hawaii, and sure enough, that voice answered the phone.  When I told him what I wanted, it took him nearly a minute to stop laughing, mostly from amazement.  We rang off over 90 minutes later, just because Bob was so goddamned much fun to talk to.  He suggested that to spare long-distance charges, I send him written questions, and he responded with not one, but two 90-minute cassettes of answers and digressions and impromptu character voices and great anecdotes — fondly recalling everyone he worked with at Daystar, the “SAG card moment” that won him a bit part in Leslie Stevens’ Hero’s Island, and the monster voice-overs he described to me as “play for pay!”  He also noted how he had done hundreds of Mission: Impossible-style answerphone messages for friends, and indeed, that’s how his tape to me began, with that voice not only intoning my name, but pronouncing it correctly.  I was so jazzed when M:I was revived, and Bob began making semi-regular trips back to the continental US for his gang-overdub sessions in Burbank, the producers considering him “as essential as Peter Graves” to the identity of the series.  Bob was spotlit on a 1988 Entertainment Tonight segment that showed the world his face at last … well, that part of the world that had not seen the first edition of the Companion, anyway.  (Oddly enough, the Companion’s initial publication was also announced on E.T. … by Mary Hart!)
One of Bob’s first voice-over bits can also be heard in The Black Scorpion (1957), and thanks to Bob Justman, he also did several alien voices for Star Trek.  His final on-camera role appears to have been in Midnight (1982), but this remains to be confirmed.  Bob died in Molokai, 31 December, 1993 at age 73. 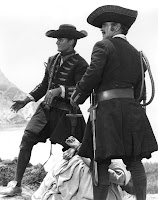 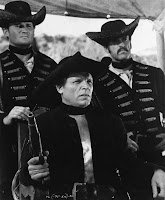 And for good measure, here are a couple of shots of stuntman Bill Hart, who played both poker and an alien in “Fun and Games.”
— DJS 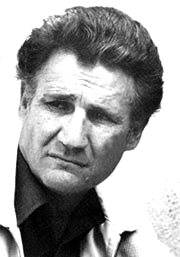 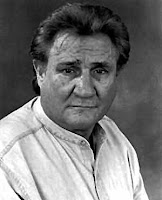 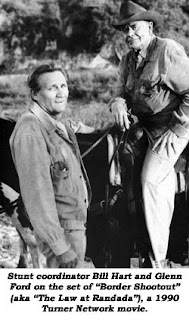 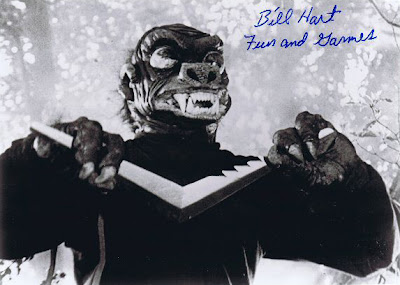