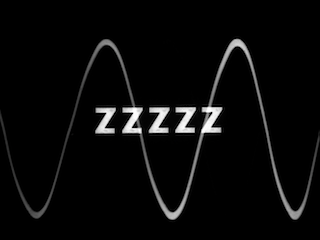 I've had this bee in my bonnet before: Back in 1993 I spilled a lot of pixels defending my interest in "ZZZZZ," which most fans peg as The Outer Limits' silliest first-season episode, if not its worst. I'm skipping the equivocation this time around — "ZZZZZ" may be minor-key OL, but it's also one of the series' most adult, visually sophisticated hours.

OK, it does feature the season's most laughable bear and least scientifically plausible premise, to put it midly. And its stripped-down production values smack of network penny-pinching; there are only four characters and, except for a second-unit shot of a church cemetery, no exteriors.

But when I watched "ZZZZZ" again for this review the malarkey it passes off as science struck me as rather ingenious shorthand, more a means of establishing the story's high-stakes domestic drama than a stab at, God and Leslie Stevens forbid, verisimilitude. The episode's austerity works in its favor, too, honing screenwriter Meyer Dolinsky's interrogation of human (and nonhuman) hubris to a razor edge, and giving it a formalism that's unique for the series.

Dolinsky doesn't get sole credit, of course. As chronicled in The Outer Limits Companion Joseph Stefano commissioned "ZZZZZ" from the writer, then disagreed with his interpretation of the nature of Ben Fields's response to Regina. Dolinsky emphasized its lustful basis, while Stefano understood it more as tenderness toward the daughter Ben and Francesca had lost.

Stefano's insistence on Ben's fidelity is in line with other episodes he wrote — both "Don't Open Till Doomsday" and "A Feasibility Study" posit the bond between a married couple as the ultimate defense against hostile alien forces, and against evil itself. But Stefano was also savvy enough to understand that faithlessness and devotion can exist simultaneously in a marriage, and this inner conflict is essential to "ZZZZZ" and sets up its crushing conclusion. In fact, despite my claim in '93 that his and Dolinsky's exclusive approaches to the story creates narrative confusion, the episode as filmed actually strikes an effective balance between the two.

The credit for this successful collaboration goes as much to the cast as to the two writers, and especially to director John Brahm, whose grasp of the tensions at play here is assured, compassionate, and blunt. 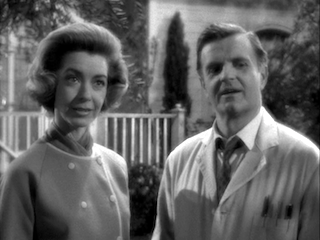 This directness can make "ZZZZZ" uncomfortable to watch. Only a corpse would find Joanna Frank anything less than adorable, and if you watch closely you'll see Phillip Abbott responding to her overt sexuality with doting patience, flattered exasperation, and the not-infrequent out-and-out leer. His Fields is a gentle man with impeccable manners, but also a socially reserved workaholic plainly unaccustomed to open displays of arousal from young women. To be fair to Stefano, Ben also loves his wife. 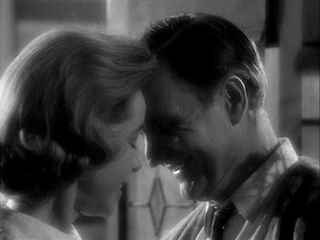 Abbott captures this turmoil with understated intensity, and his subdued twitchiness calls Fields's justifications for keeping Regina around seriously into question. Just because he and Francesca raise the specter of their stillborn child, for example, doesn't mean that's what either of them sees in the bee girl; Francesca understandably wants to believe the best about her husband, but Ben is in no position to gauge or understand his longing for the younger woman — an ideal quality in a dupe, which is what Regina counts on him becoming. 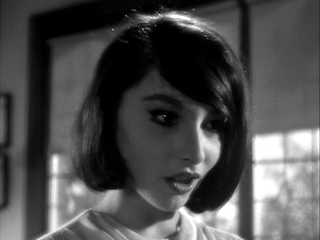 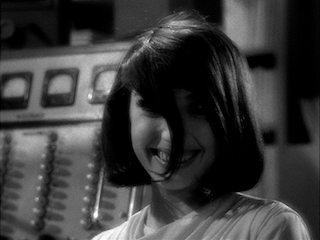 Girlish petulance in a pulchritudinous package can be intoxicating before the hangover kicks in, so Fields plays easily into Regina's hands. Francesca, who's immediately put on the defensive for her natural feelings of protectiveness and jealousy, has a more rational reponse to the mutant invader in her home — similar to that of the bees in Ben's lab, who detect the decoy he plants in their hive and terminate it with extreme prejudice (and extremely high-pitched voices). Francesca is the most self-aware character in the episode, but she's also innocent and overmatched, and it costs her everything. 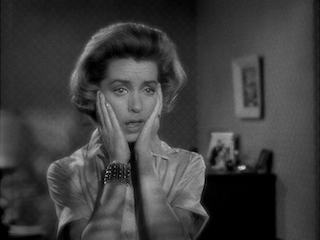 Regina, her colony, and Ben all pay, too, but only for their own arrogance, and not with their lives. Unlike the Helosians in "O.B.I.T.," who know precisely how to exploit human frailty, the bees' plan fails because they neglect to account for Fields's devotion to his mate — a one-to-one bonding unknown in their collectivist culture — or miscalculate it as a flaw. (This is the gist of Ben's climactic rant to Regina about the sanctity of marriage, which Stefano wisely added despite Dolinsky's resistance.) Fields realizes too late that he's been manipulated, by himself as much as by the hive, and is left agonizingly alone to contemplate his weakness and self-delusion. Regina, a failure in every sense, simply buzzes off. 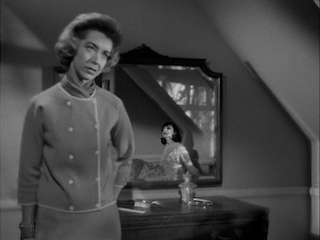 Mull that conclusion over for a minute: A blameless, likeable character we've been encouraged to sympathize with is murdered three acts in by another character who's grown increasingly grating with every scene, and who gets off scot-free. That's quite a place to leave an audience, and hardly the stuff of melodrama, which is typically the label hung on "ZZZZZ."

But if it isn't soap opera or particularly good science fiction, what is it? Simple — it's The Outer Limits. "ZZZZZ" may be mannered and ostensibly off-message for the series, but it still pivots on the same piercing observations about human behavior as "The Architects of Fear," "O.B.I.T.," "The Invisibles," and other vaunted episodes. It also poses the same implicit question they do: Are we hard-wired for betrayal and devestation?

Along with this sly adherence to OL tenets, "ZZZZZ" is a minor aesthetic marvel. From the opening, mildly distorted shot of the Fields's garden (an impressive Jack Poplin set shot for maximum depth by Conrad Hall) to Francesca's pointedly dowdy and outdated dresses (which telegraph her groundedness as well as her impending old age), virtually everything on screen has metaphorical weight. Lucky thing, because the episode's special effects, such as they are, don't make sense on any level.

The use of mirrors is especially inventive. We first see a full-length one in Ben and Francesca's bedroom as Francesca discovers the lie behind Regina's presence by telephone. Later, as she helps Regina settle into her room, the girl is reflected in a dresser mirror as the pair talk; it's the only scene in which a character actually appears in one of "ZZZZZ"'s mirrors, and intriguingly it's the nonhuman one. Finally, in the last scene, Ben stands broken beside the same mirror earlier associated with his wife, and naturally it reflects only an empty room. 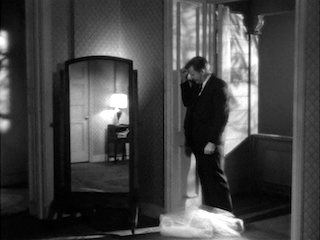 This commonplace household object encapsulates the story's existential rifts, from the sense of individual identity Regina can't comprehend or experience to the vanity that turns Ben's head and exacerbates Francesca's feelings of inferiority for her unavoidable aging. Yet as a symbol it's applied with fluidity and ease, so much so that you'd be forgiven for not noticing any mirrors in the episode at all. That's not a bad symbol for the richness of "ZZZZZ" itself — easy to overlook in a casual viewing, but abundant on closer inspection.
Mark Holcomb writes about movies, television, books, and general pop-cultural ephemera for The Village Voice, The Believer, Time Out New York, Salon, and whoever else will have him. He first watched The Outer Limits in its original run as a highly impressionable, temperamentally morbid three year old, and hasn't been able to shake it since (not that he's tried). He and his twin brother, David, indulged their fascination with the series back in the pre-blog '90s, and their efforts live on here courtesy of David J. Schow.
Posted by John Scoleri at 2:00 PM