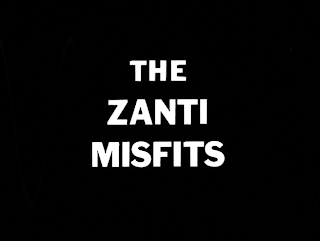 In an arrangement with the Planet Zanti, the US Government has agreed to harbor their society's exiled undesirables. Everything is on track until a would-be Bonnie and Clyde (Olive Deering and Bruce Dern) crash through the barricades in the cordoned off area and run face first into the extraterrestrial Misfits. 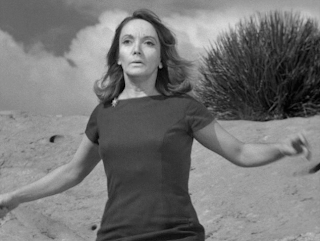 JS: I expect to read dozens of posts calling us crazy for not automatically bestowing this most memorable episode with the maximum Zanti rating. While I'm pleased to report that it does not disappoint even with high expectations going in, it falls short of perfection. In fact, I can forgive the episode almost all of its shortcomings, but one lackluster performance could not be overlooked. Damn you, Olive Deering! Seriously, did this woman have motor control issues? What's with the constant arm flailing and blank stare? Was she instructed to play the role as if drunk? Was she auditioning for the Candace Hilligoss role in Carnival of Souls? The stop motion Zanti movements appeared more natural. Hell, the inarticulate Zantis-on-a-stick were more natural.


PE: I couldn't agree with you more, Scooter. Perhaps Olive had just had her nails done at lunch? Amphetamines maybe? And what's with that goofy smirk at the end of the episode? In an alternate OL-Universe, Bruce Dern was a prick and sent Olive up the hill to investigate the big teapot. We get less Olive, more Dern. Win-win.

JS: Can you imagine sitting in on the pitch for this episode? Picture giant ants with human faces! What could easily have been a laughable bear has proven to be one of the (if not the) most popular, and certainly one of the most memorable creatures of The Outer Limits congregation.

PE: I'll go a step further and opine that many genre geeks (myself included) will tell you that the Zantis are the single most horrifying image burnt into their brains. (As much as I love the little buggers, they've got nothing on the Zuni Fetish from Trilogy of Terror. But we'll put it to a vote. Everyone be sure to cast your vote in the Poll in the sidebar to the right. -JS) We all talk about "I soiled myself when I was a kid watching so-and-so" or "This one gave me nightmares long in to my adult years" and "blahblahblah." But, really, how much of that talk is pure hype or getting caught up in the moment? How many films are "the scariest movie I've ever seen?" How many scenes "stunted my growth?" Anyone seeing the Zantis as a kid was affected. "Picture giant ants with human heads" indeed! Recipe for disaster. And yet, here they are, just as effective to me 40-something years after my first viewing. Imagine one of these little guys crawling up your pants leg, heading for something to munch on. Yeah, the show's got issues (I think, by now, we all know that Stefano had a slight problem with the military and it colored his writing for those characters), but the bugs are so damn cool I'm willing to forgive. 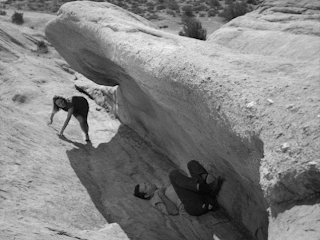 JS: After Dern pisses off the first Zanti, I thought it was cool how in all subsequent appearances his arms and legs are drawn in like a dead spider.

PE: And that's a hell of a shock when Bruce is rolled over and Olive comes face to face with Mr. Zanti. 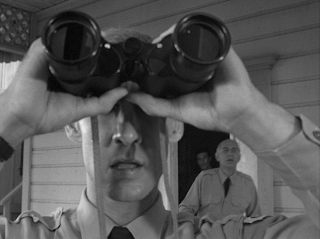 JS: The only real standout performance for me was Robert Simon as General Hart.  He 's totally committed to his mission, and is not reduced to a two-dimensional cardboard cut-out military man. After their introductions, you might expect that Roger Hill (Woolman) and not Stephen Grave (Tolan) would be more likely to draw first (Zanti) blood. But then Grave flicks an ant off of a post, and later kills the first Zanti in cold blood. Was he trying to start trouble? 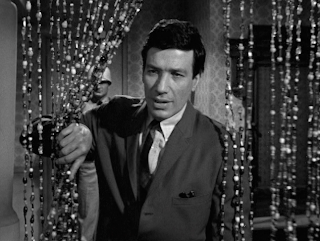 JS: Lest we forget this is an episode of The Outer Limits, all the usual suspects are present. In addition to the Zantis, we've got an alien spaceship, a scientific research facility (nestled within a gothic ghost town setting), and  a roomful of eager scientists and military men. While the facility has all the requisite dials and knobs, somebody thought it needed some dressing up, with beads hanging in the doorways.

PE: I'd have liked the stand-off to be a bit longer (and minus Olive of course). When it comes down to it, it's only a few minutes long, albeit an intense few minutes.

JS: While the Zantis get their fair share of screen time throughout the episode, the real payoff comes in the form of the assault on the scientific facility. Plenty are dispatched at point-blank range, by gun, by hand grenade, by bludgeoning—you name it. And there's something endearing about a grown man with a half dozen Zantis attached to his costume rolling on the ground giving it his all. And to leave no stone unturned, yes, there's even a Zanti-in-the-pants. 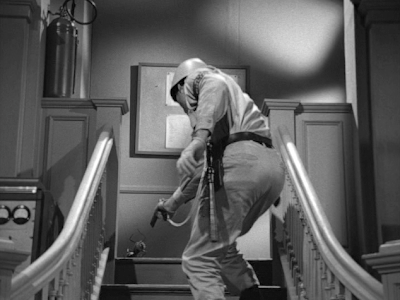 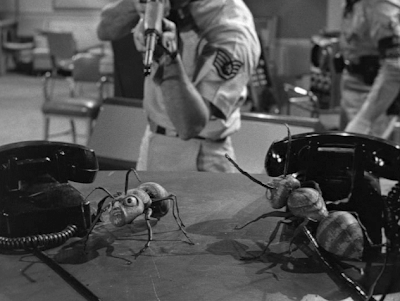 PE: The shot (captured below) of the dozens of Zanti silhouettes was probably very easy to shoot but incredibly creepy. Imagine how claustrophobic it would be, trapped in a little house, surrounded by carnivorous, Don Knotts-headed creepy crawlies. 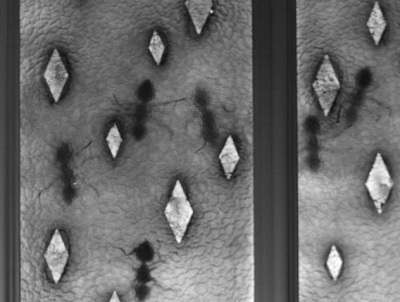 JS: The episode has a nice wrap up when the Earthlings get the skinny on the situation from the Zanti homeworld, marred only by—you guessed it—the return of zombie Olive Deering.

PE: I like the final shot of burning Zantis (marred only by the omission of a burning Olive). A nice stroll down memory lane, I think.


JS: One last tidbit of "Zanti Misfits" trivia—you may not be aware that between 1985-1987 our very own David J. Schow wrote six Miami Vice novelizations under the ZM-inspired pen name Stephen Grave. 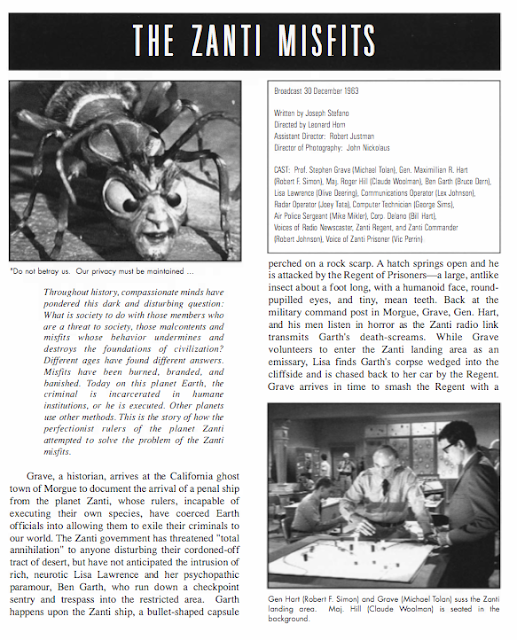 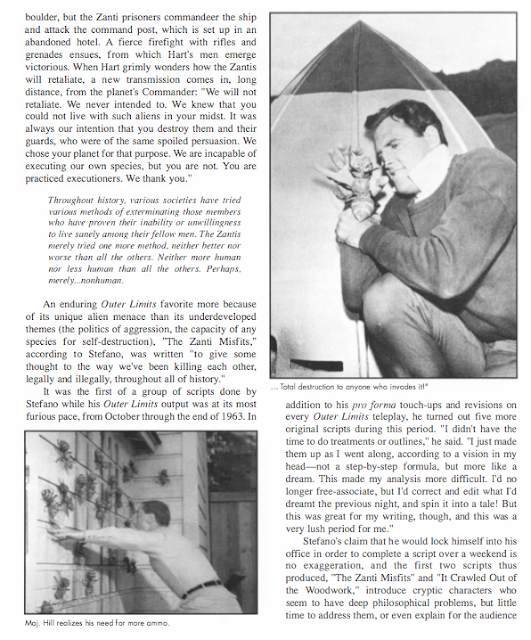 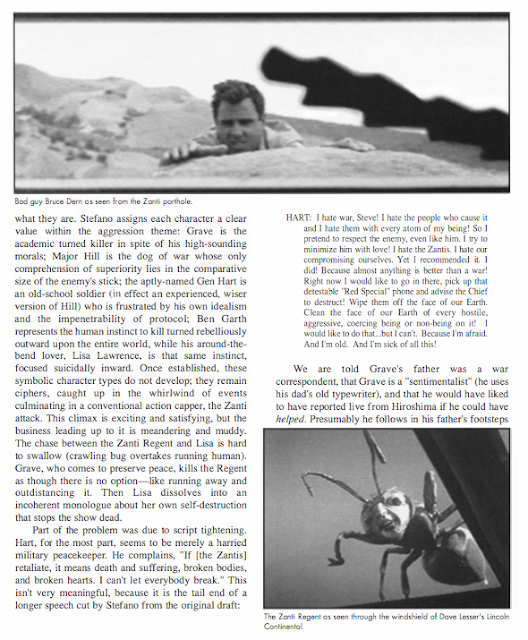 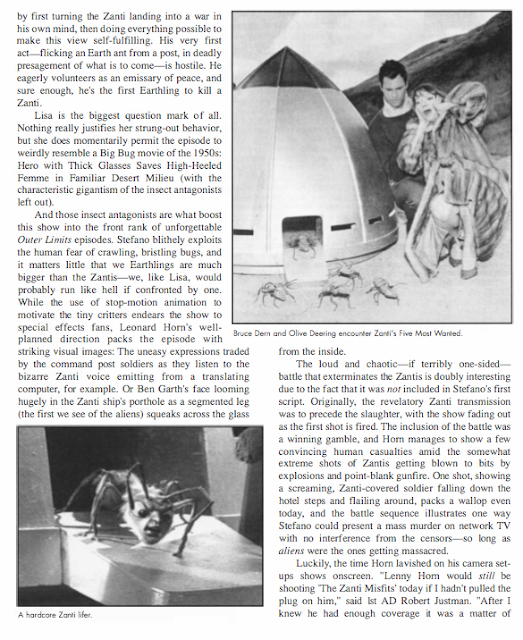 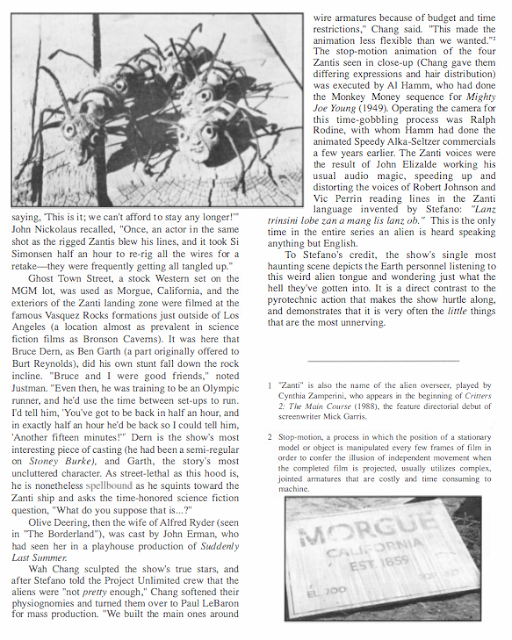 It's Zanti Day at We Are Controlling Transmission!

Come back for more Zanti goodness at 9am!

Next up, we're thrilled to have landed a WACT exclusive Zanti Misfits interview—watch for that at 12pm.

And be sure to check back at 2pm for Steve Mitchell's Spotlight on "The Zanti Misfits."

And since we know there's no such thing as too much (too many?) when it comes to the Zanti Misfits, be sure to check out the Flat Zanti homepage RIGHT NOW to get in on the invasion. 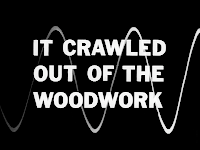