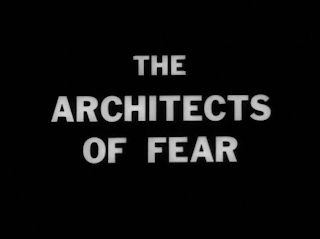 A group of Star Chamber scientists decide the best way to avert a global holocaust is to get countries of the world to unite against a common enemy. Allen Leighton (Culp) draws the short straw and is selected to be transformed into a Thetan. As is to be expected, such a decision is destined to have a negative impact on his marriage.
JS: Wow. Where to begin. A killer concept, well executed. Robert Culp is fantastic as Leighton who, even after discovering his wife's infertility issues are resolved and that he's going to be a father, doesn't deviate from his task at hand.
PE: Do you think Culp had it in his contract that he had to wear the same white tennis shoes and high water pants in every role he played?
JS: I want to know what happened to the Thetan after Leighton sets him free. Did he crawl back into his cage all on his own? I'd like to believe there's a deleted scene where all the scientists are chasing the little rascal around the lab (with fake mustaches and cigars? -PE). And speaking of the little critter, despite only being seen in shadows or silhouette I immediately recognized him from my youth. He had, of course, been rechristened as "Suckerman." Tell me that the resemblance is not uncanny.


PE: I was thinking he may have been of Zuni origin.

JS: The transformation make-up on Culp is extremely effective, and his performance ratchets up as he becomes more "Thetan" and less human. The resulting Thetan monster suit is chillingly effective (in no small part due to the way it was shot). 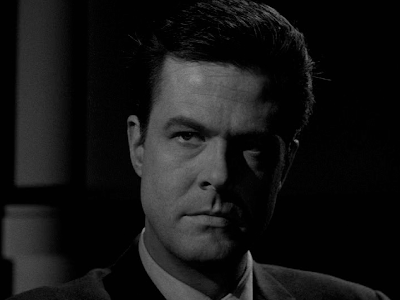 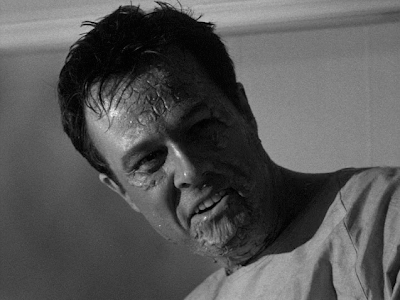 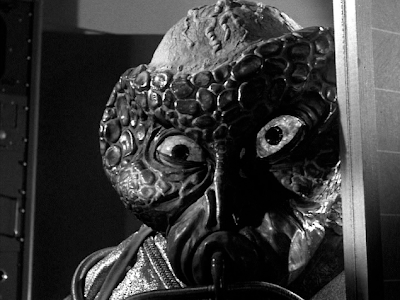 PE: Agreed! I think Culp is, like in most of his early to mid-60s TV work, dynamic and interesting. Remember that Culp cut his acting teeth on TV westerns. Looking at those intense and determined eyes, you can see why he excelled in that genre. I can think of several stand-out performances off the top of my head, most notably Hoby Gilman in Trackdown for two seasons (for my money, aside from Sam Peckinpah's The Westerner, Trackdown was the best half hour western show and spun off Steve McQueen's Wanted: Dead or Alive). Culp was a chameleon, able to drift from one genre to another, be it the western (in addition to Trackdown, he also guested on Rawhide, the aforementioned The Westerner, Outlaws, and The Rifleman), suspense (Alfred Hitchcock Presents, Naked City), espionage (the old-timers among us remember Culp best as Kelly Robinson on I, Spy), comedy (the youngsters among us will no doubt know Culp as Debra's dad on Everybody Loves Raymond), and, of course, science fiction (his three legendary appearances on Outer Limits). Culp was also an accomplished writer and director. As a matter of fact, my favorite Culp role is that of Frank Boggs, the disheveled detective of Hickey and Boggs, a project that Culp directed and reunited him with good friend (and I, Spy co-star) Bill Cosby. Here's a little-film-that-could that deserves to be re-examined by today's audiences. Can you tell I'm a big Robert Culp fan?

JS: I think the IMDB just threw up in our blog. (all of that information came straght out of my encyclopedic brain. -PE) And yet somehow you managed to omit his role as Bill Maxwell on The Greatest American Hero?

JS: Do you think the scientists built their own rocket or borrowed one of the Flash Gordon jobbies off the Universal lot? 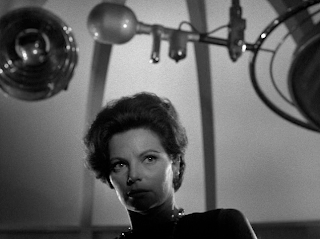 JS: I thought it was interesting that rather than recoiling in terror, Leighton's wife (Brooks) gives the Thetan a sultry look when she runs into the him in the lab. Before she even realizes that it's Allen, her eyes appear to be saying, "Your planet or mine?"

PE: Definite "Outer Limits Babe of the Week." I really dug our first shot of the Thetan. coming out of his ship and into the tall reeds. If I'd seen this on its initial run as a five year old tyke, I'd have needed to change my Batman underoos swiftly. It's a very creepy scene cut too short by pesky hunters (led by Billy Green Bush, who went on to have a respectable career as a character actor) and their damn guns! I guess these brilliant scientists never thought about hillbillies and their possum-whompers. 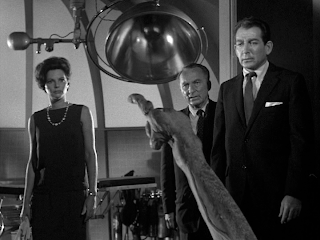 JS: Do you think another Thetan would have taken one look at him and said, "Cheee-Cheee Cheeum Chum" (translated to English: "Jeepers-creepers he's a biggun!")? When all is said and done, the scientists plan has gone awry, Leighton is dead, and his wife is left to raise their child alone (and one wonders what kind of child it will grow up to be). It's a pretty somber moment, and it's extremely powerful thanks to the performances of all involved.

PE: That is his arm sticking up, isn't it?
JS: Nice. Way to spoil the mood, Enfantino.
JS RATING:

David J. Schow on "The Architects of Fear": 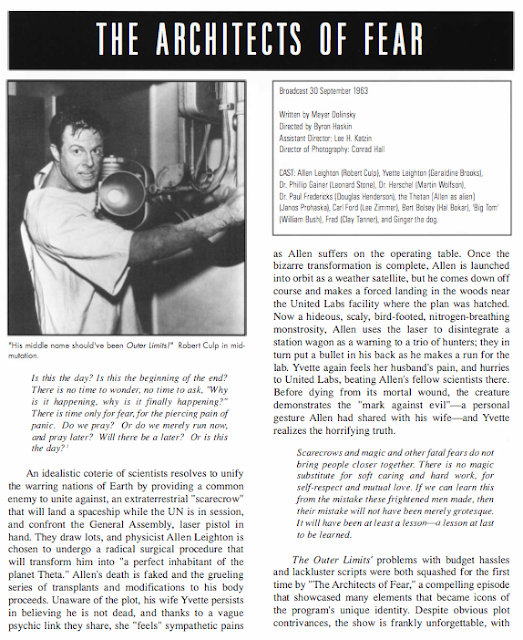 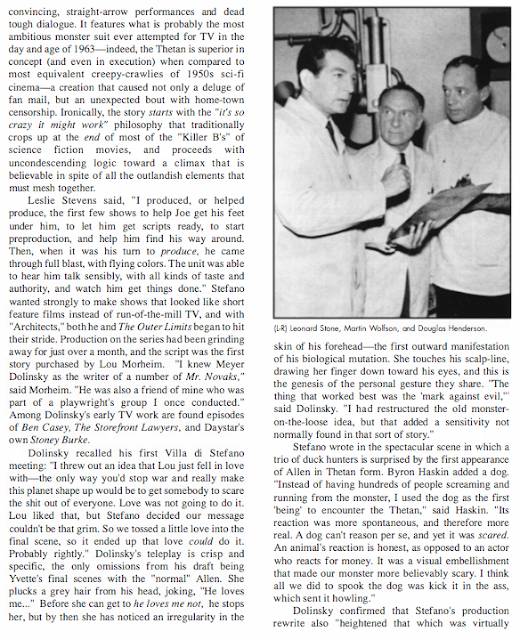 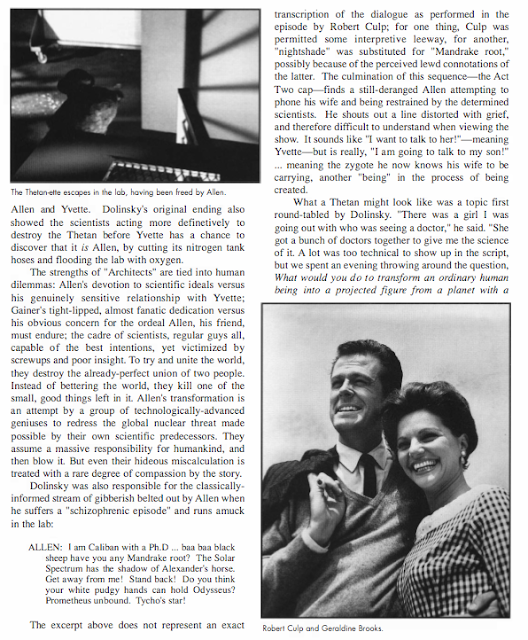 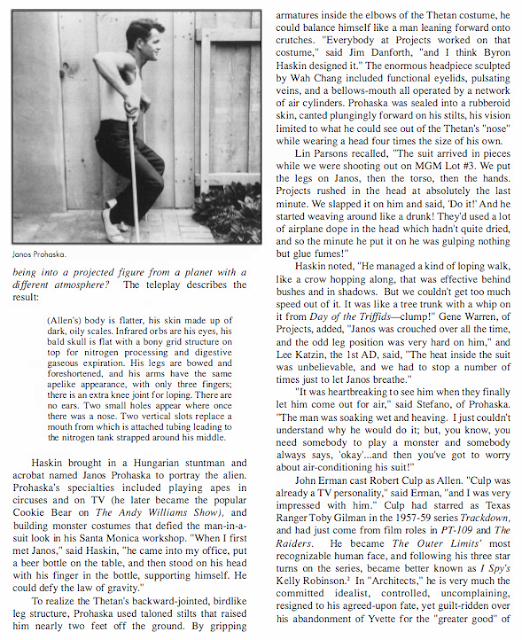 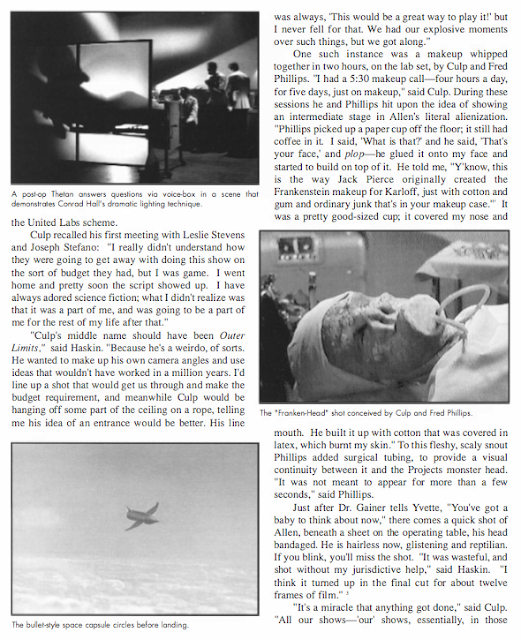 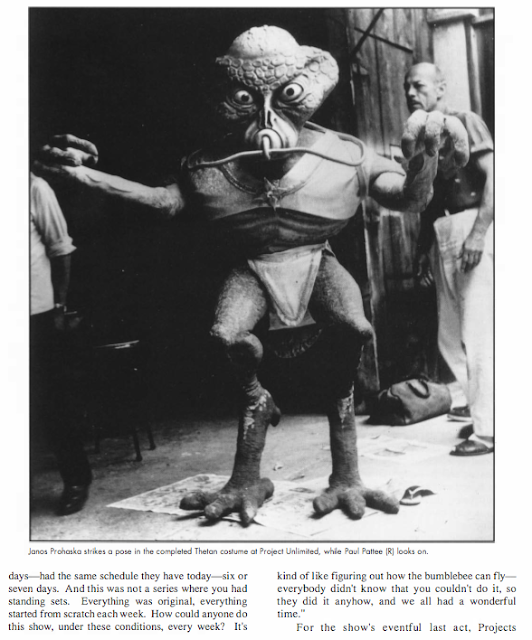 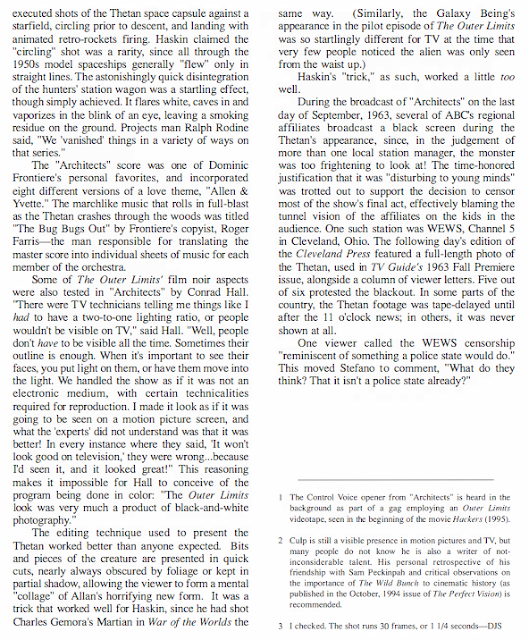 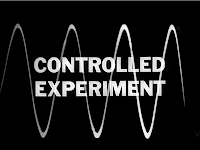