THE OUTER LIMITS … IN COLOR!

by David J. Schow
One of the big, vaunting targets that never got hit with the 2nd edition of the Outer Limits book was a middle section of color plates, for the very few, rare color shots from the show.  (Another was a limited hardcover run, which also got killed by budget.)  So … feast your eyes! 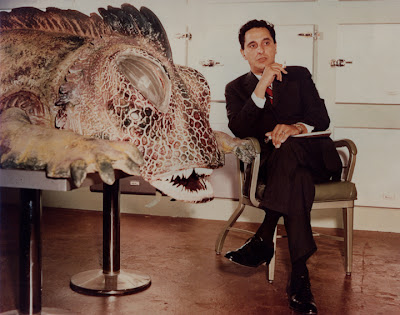 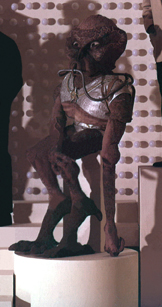 CLOSE-UP view of the Thetan as he appeared in the Fall Premiere 1963 issue of TV Guide … “slightly modified” because the original color 8x10 transparency was heavily damaged.  (A bigger version of this shot is seen on page 121 of the book.) 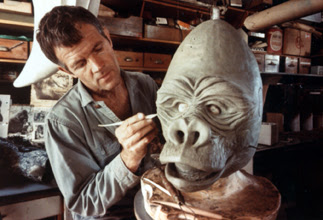 Janos Prohaska works on an ape sculpt in his workshop. 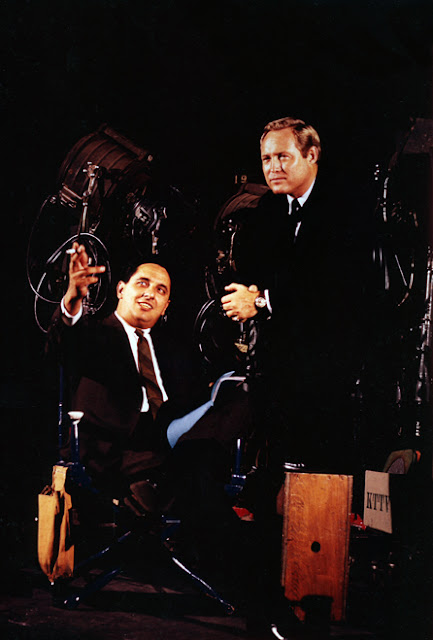 Joe Stefano (L) and Leslie Stevens in a photo by Gene Trindl for the Richard Gehman’s TV Guide article, “They Deal in Ideas … and Outer Space” (21 March 1964).  Note crate from KTTV, formerly Metromedia Television’s Channel 11 in Los Angeles, the location of the soundstages used for most of Season One’s interior shots. 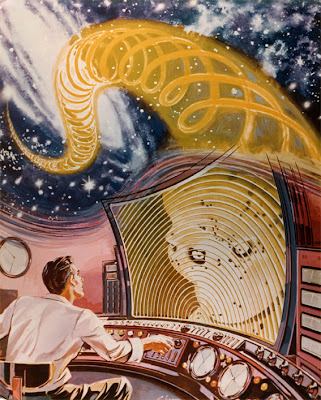 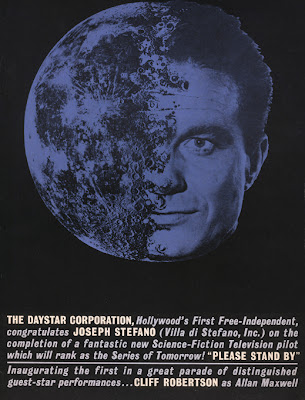 Tinted trade ad announcing the completion of  Please Stand By, probably from The Hollywood Reporter. 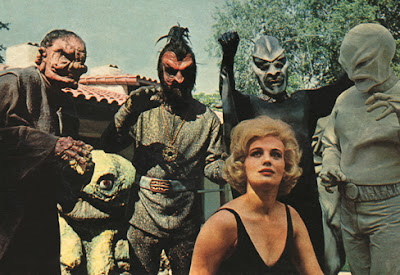 A much-reproduced, all-over-the-internet candid of a screen-used Zanti,  taken at the home of Joe Stefano (that’s his swimming pool in BG).  Note the “mouth rot” and absence of pupils, which indicates this was one of the articulated (posable) models — the jaw moved, the head could turn, and the pupils were separate pieces dropped in and manipulated so the Zanti could “look” in different directions. 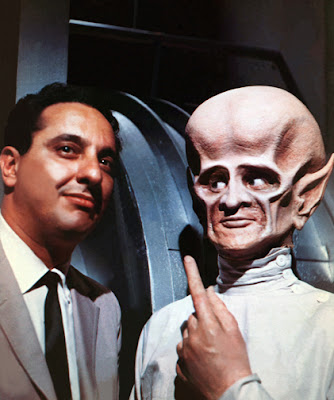 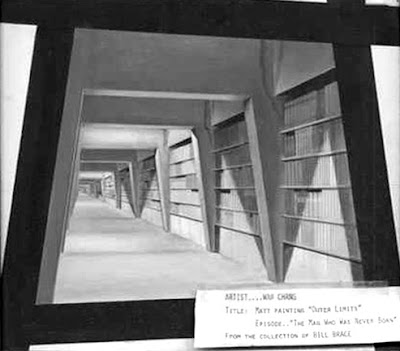 NOT COLOR, but an interesting shot nonetheless, of Wah Chang’s matte painting for the library in “The Man Who Was Never Born” – the actual illustration was a mere eighteen inches wide.  (From the collection of Bill Brace, of Project Unlimited.) 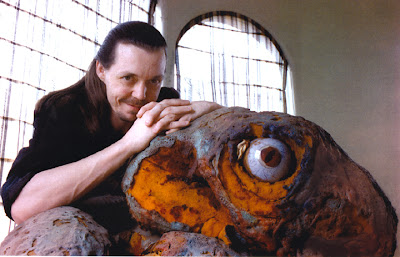 DJS with the rotting remnants of “Turdo” from “Don’t Open Till Doomsday,” taken at Forry Ackerman’s house by Chris Matthews, for the L.A. Times. DJS with a “reconditioned” Zanti from “The Zanti Misfits,” taken at Forry Ackerman’s house by Chris Matthews, for the L.A. Times. 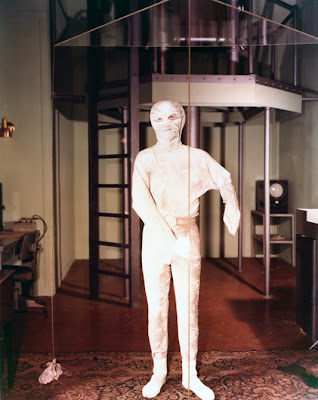 Our Bifrost pal from “The Bellero Shield” 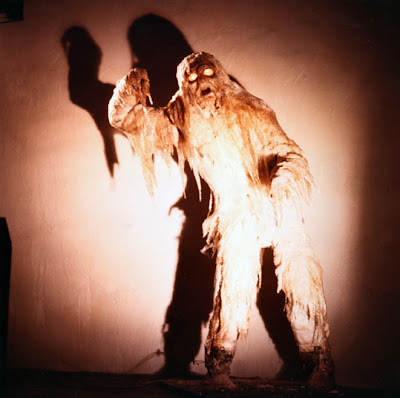 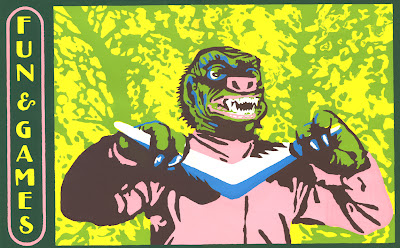 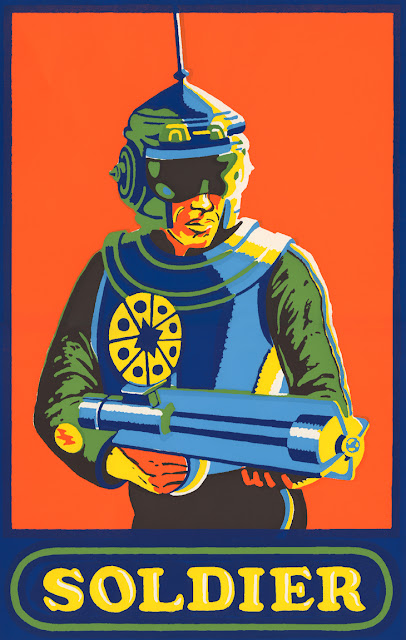 Gary Dumm did wonderful full-color silkscreen prints of his own design as special giveaways for Ted Rypel’s The Outer Limits: An Illustrated Review:  “Fun and Games” (Volume One) and “Soldier” (Volume Two).  Below is the rough for the “Sixth Finger” print that was to accompany Volume Three.  “Keeper of the Purple Twilight” – never done – was planned for Volume Four. 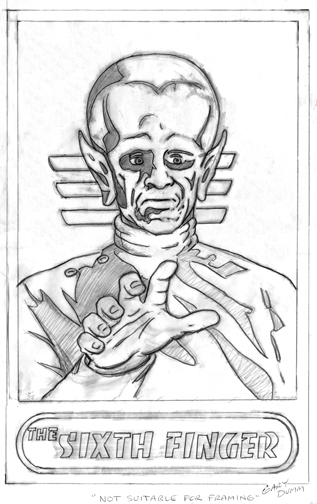 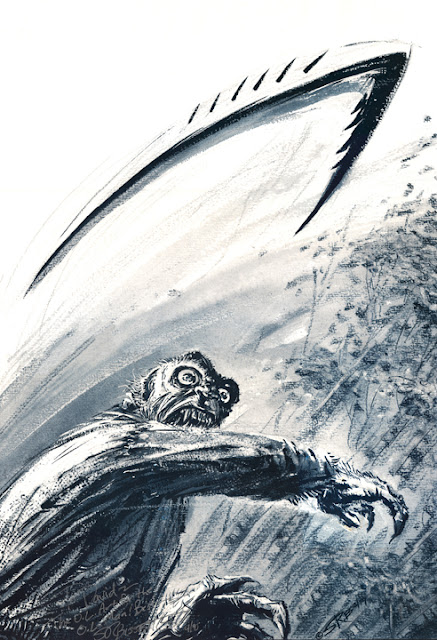 And while we’re at it, here’s Steve Bissette’s poster for “Fun and Games.” 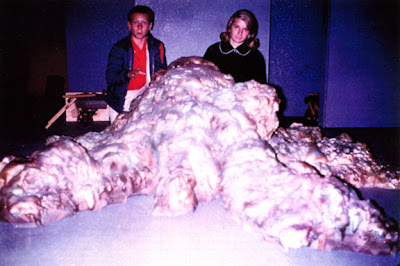 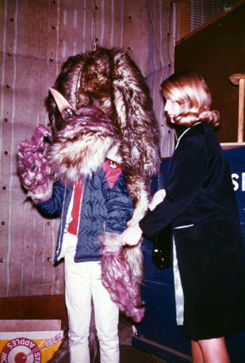 The son and daughter of 2nd Season Ben Brady assistant B. Ritchie Payne pose with Janos Prohaska’s “Mikie” from “The Probe,” giving a true sense of the suit’s scale, and attempt to reconstruct the Megasoid from “The Duplicate Man.”  (Courtesy B. Ritchie Payne.) 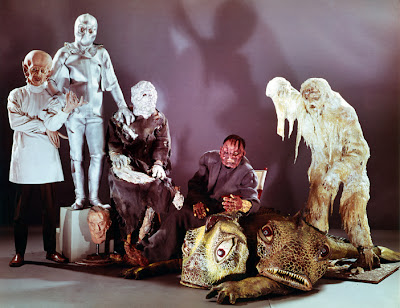 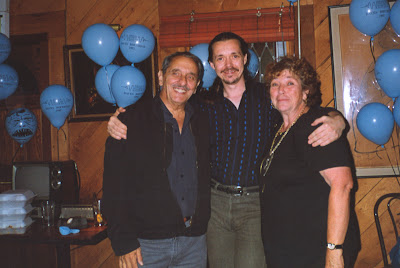 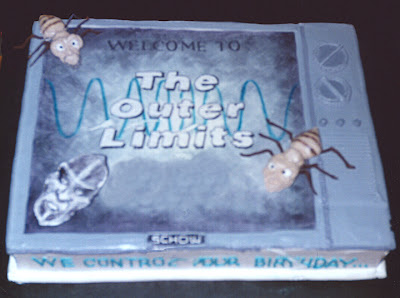 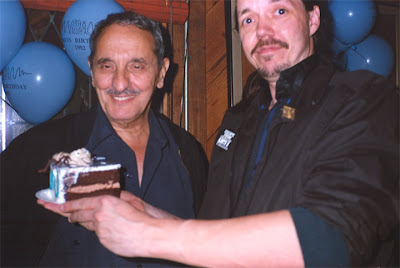 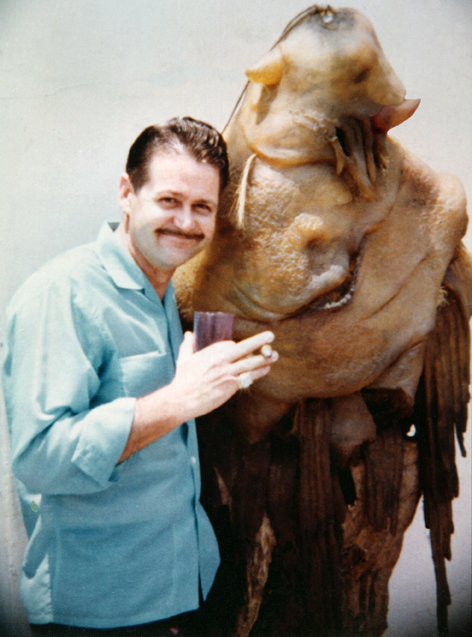 Cocktails with the Chromoite, after the Project Unlimited auction, toaster unknown.  From the collection of Forrest J Ackerman.  What became some of the other costumes and props?  WE THOUGHT YOU’D NEVER ASK!  Stay tuned to this blog …
Posted by John Scoleri at 6:00 AM