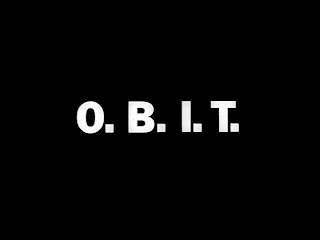 O.B.I.T. (Outer Band Individuated Teletracer) is a new toy developed by the defense department to spy on anyone they want to. Just now limited to an area of 500 miles, many O.B.I.T.s would spell total annihilation of privacy for the world. That's the aim of the menacing creature who's behind the proliferation of the spy camera. Senator Orville (Breck) just wants to get to the bottom of a murder at the base but stumbles onto the O.B.I.T. plot while investigating. Mayhem ensues.
PE: It's Big Brother! Meyer Dolinsky's flat version of 1984 should have been called "ZZZZZ", but I see Dolinsky used that later on in the season. To think this is the same guy who wrote "The Architects of Fear." 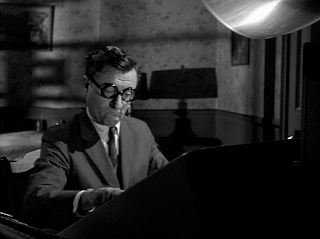 JS: I was excited during the prologue when I thought we had reached the Robert DeNiro episode of The Outer Limits.

PE: Preachy and badly acted, but O.B.I.T.'s major sin is that it's deadly dull and boring. The standout "wooden Indian" in the crowd is stiff-as-a-board Peter Breck (separated at birth from Roger Moore) as the meddling Senator. Breck would shine as Barbara Stanwyck's son, Nick Barkley, on The Big Valley just a few years later but here he's out of his element as a Perry Mason-like Senator. He's on a quest to get to the bottom of the mystery, but at times, comes off as nothing more than a spoiled child who's not getting the toy he wants (as when he slams papers into a file and shuts the file violently). In his laughable expository scene at O.B.I.T.'s climax, Jeff Corey (as the bear's alias, Mr. Lomax) gesticulates wildly, tosses papers in the air and generally comes across intoxicated. Whether he had just come back from a liquid lunch or director Oswald thought menacing would be the wrong approach, I have no idea. And here's my vote for John Turturro as Lomax in a remake. 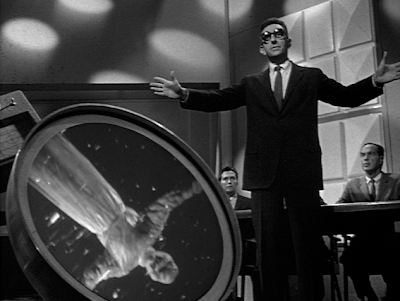 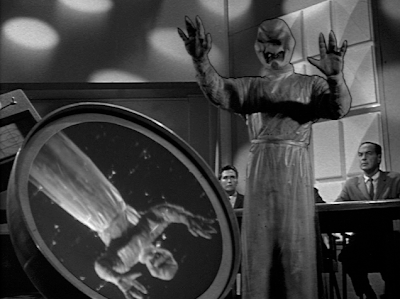 JS: I didn't find as many problems with the performances as you, but I was equally underwhelmed by the story. I'm all for an interesting courtroom drama. Operative word being interesting. Did anyone really think what was going on over at Cypress Hills was worth all of this attention? 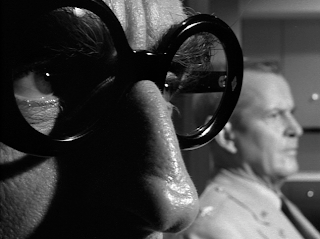 PE: The usual photographic nuances (the noir lighting, the curious camera angles, etc.) here seem annoying. One shot of Byron Lomax's evil eyes (and his penis-like nose) peering at a witness on the stand from behind his coke-bottle glasses would be enough. Might be very effective. But several of these close-ups within one episode is too much.

JS: Here's where you and I are on opposite ends of the spectrum. When you're shooting what could easily be performed on a stage, why not take advantage of every opportunity to get creative with lighting and camera angles. Take that away and there's very little left to appreciate in the episode.

PE: Similarly, when we cut to the three observers, they seem to serve no purpose other than to look at each other in shock and mumble. I did like that when the O.B.I.T. screen displayed a subject, inanimate objects such as telephones or filing cabinets wouldn't appear (although you have to wonder why clothes would make the cut) which led to several scenes of pantomiming.

JS: Oh look, someone's speaking ill of their supervisor. Wasted use of O.B.I.T. technology. Watching someone by the pool in their bikini potentially cheating on their husband—now we're straying into believability. 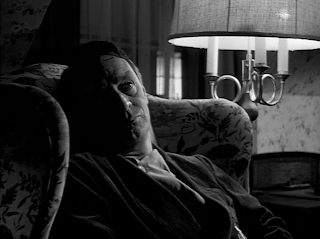 PE: Thank goodness when we finally meet the elusive Doctor Scott, held up in a "rest home," he's played by our old friend, Harry Townes. He's got a very small role with limited screen time but Harry steals any scene he appears in. Our readers will remember Townes from his standout  Thriller performances in "The Cheaters" and "Final Legacy" (the latter of which won Harry my Golden Karloff as Best Actor of season one).
JS: I can't believe you didn't bump your Zantis by one just because Townes showed up. Or by the sound of it, perhaps you did.

PE: The episode's final scene, after Lomax comes out of his alien closet, is theatrical but absurd. The ten people leave the room single file as if they're exiting a movie theater, no awe, shocked discourse, no "Holy shit, what was that??!!" Only a passed look between Mr. and Mrs. Scott that hints they'll be getting together for coffee later. I know it's all done for effect but to me it only comes off as silly. But that may be the perfect capper to a silly episode.

JS: I was thinking all along that our bear could have passed as the cousin of Andy from "The Galaxy Being." And just like Andy, he's got a natural crowd-dispersing disposition. The one question that remains unanswered for me—why in God's name would you create a human doppelganger and give him the hands of Darwin the ape?
JS RATING: 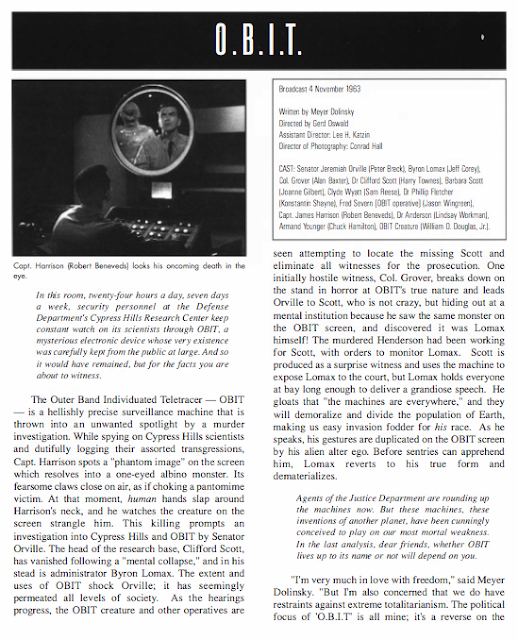 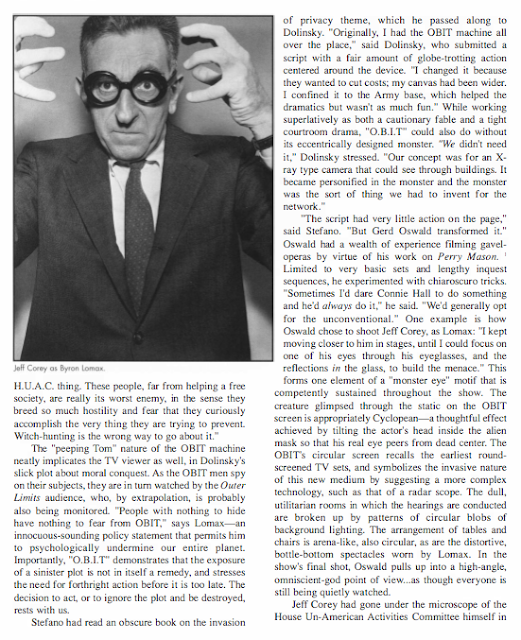 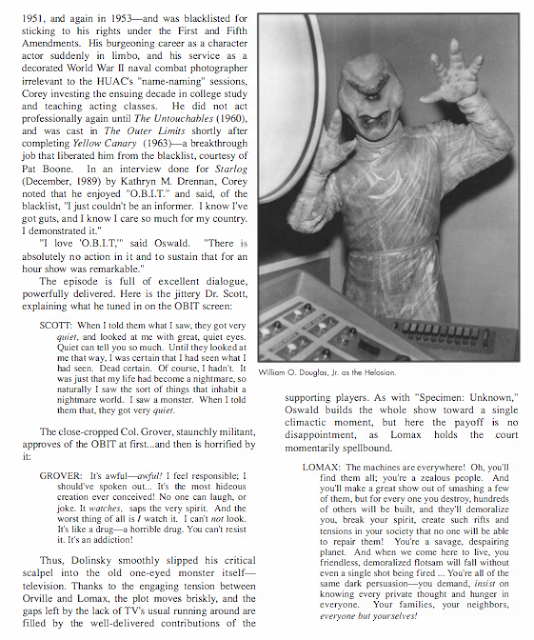 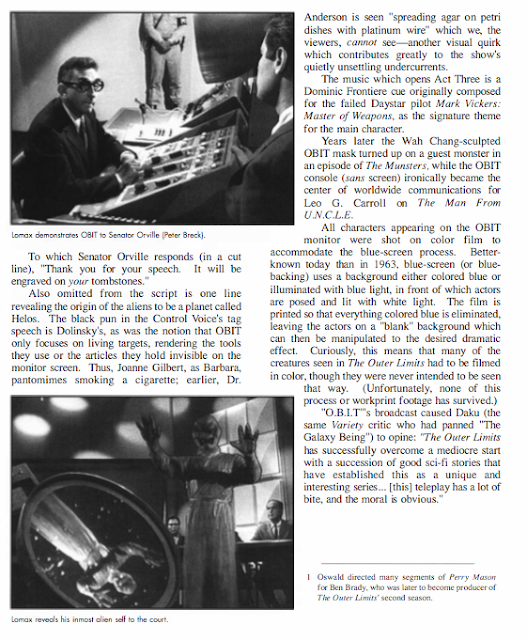 Be sure to check back later today for Larry Rapchak's Spotlight on "O.B.I.T."

Posted by Peter Enfantino at 6:43 AM