Spotlight on "The Borderland" 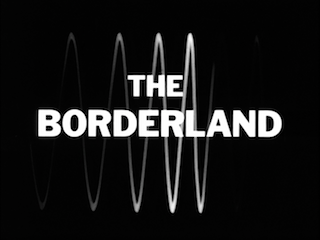 This first-produced episode of The Outer Limits as a series is a fitting if peculiar inauguration: The show was Leslie Stevens's baby so he deserved first crack, but the bombastic, ultimately superficial "The Borderland" provides no clue as to what was coming.

It doesn't much resemble the pilot, either, and broadcast-wise it wasn't even an inaguration. Network brass, jittery over "The Borderland"'s jargon-besotted highbrow characters and (big surprise) lack of a monster, pressured Stevens to put off airing it until nearly halfway through the season. So it was wedged between the problematic "It Crawled Out of the Woodwork" and "Tourist Attraction," a snoozer that gets my vote for worst of the season. It's a wonder anybody tuned in after that, although the lucky ones who did were treated to a micro-invasion by the low-lifes of planet Zanti.

Given its transitional place in the series' production timeline "The Borderland" probably deserved better, and even now its stuffy repetitiousness hardly puts it in the same league as the bore it preceded. "Borderland" is probably best approached as a self-contained one-off—a movie, really, something its large cast and converging story lines (both of which Stevens favored again in his final OL entry, "Production and Decay of Strange Particles") reinforce. 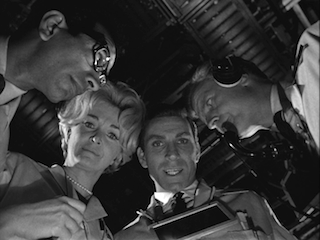 Better yet think of it as the middle third of a trilogy, since three of the four episodes Stevens helmed—his comedic budget-saver "Controlled Experiment" being the exceptionare linked in a seriously meta, possibly even autobiographical way. "The Galaxy Being," "The Borderland," and "Production and Decay" all center on driven, roguish geniuses who flout convention and risk their lives and careers to follow pursuits with no guaranteed payoff, and taken as a trio these episodes represent an intriguing story arc.

Allan Maxwell in "Galaxy" is all youthful exuberance and fearlessness, his regard for civic and marital protocol wholly overshadowed by his quest for cosmic enlightenment. Which he gets in spades. In "Borderland" Ian Fraser is equally daring on a personal level, but at least understands the need for professional schmoozing in order to fund his outre research. He gets two right hands for the trouble.

There are other subtle shifts in this episode. Fraser's wife, Eva, is his colleague, whereas Carol Maxwell is merely a disregarded, disgruntled bystander to Allan's striving. Fraser also has a pair of middle-aged confidants—his benefactor's business manager, Sawyer, and fellow scientist Russell—who bear a striking resemblance to Stevens himself. Fraser, for his part, isn't un-Stefanoesuqe, and his two de facto executive producers are inclined to advise caution in both creative and financial matters (advice he largely ignores). 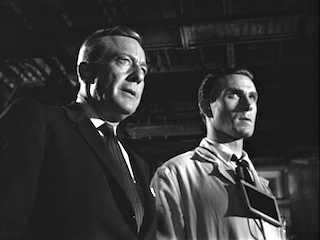 OK, this undercurrent of torch-passing could just be a byproduct of my drifting interest in "Borderland"'s actual plot, but the timing of the episode's production roughly coincides with the initial partnership between Daystar and Villa de Stefano. Very roughly, but still. Regardless, the final third of the trilogy—the one with "Decay" in its title in which the rebellious scientist protagonist is an aged weakling who does sloppy work and sends his partner to certain nuclear heat-death—came shortly before The Outer Limits was yanked away from its creator, so draw your own conclusions. If these episodes are a chronicle of what producing a weekly television series does to a guy, maybe The Outer Limits was Stevens's cry for help.
Enough with the blue-skying, because "The Borderland" does have some interesting tangible qualities. The performances are good all around, with Cooper and Ryder being the standouts, and it's beautifully shot by John Nickolaus. Stevens's pacing is brisk and his compositions assertive, but what most surprised me is his story's alignment of science with hucksterism—the early scenes in which Fraser and crew woo moneybags Hartley are blatantly juxtaposed with Palmer and Price's spook-show shakedown, and there's a ritualistic quality to the physicists' experiments that isn't far from the seances the grifters conduct. Stevens's status as a hard-science nut is admirably undermined by these savvy parallels, and their cynicism is actually kind of refreshing. (Fraser's flamboyant flailing around and bellowing countdowns during the latter sequences—he never seems to touch a knob or dial himself—more resembles someone directing a theatrical play, especially with the stage-like dimension portal device looming in the background. More food for the OL-as-LS-autobiography theory.) 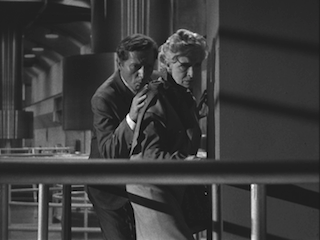 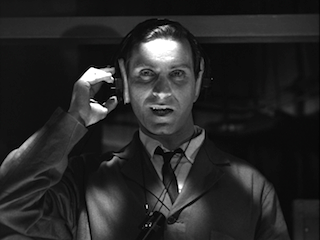 ABC was right that there's no bear lurking around in "The Borderland," but its visual effects are thoughtfully conceived and gracefully executed, and their obvious expense reminds us that we're watching early, pre-budget-crunch OL. The scene of Fraser's two right hands writhing on Hartley's tabletop is surprisingly creepy; instead of the cheap stunt it could've been, we see how such a condition could be crippling. 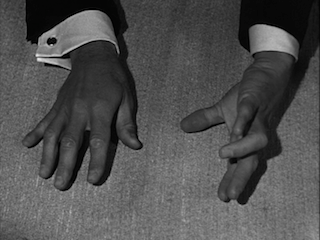 The last-act psychedelic blast during Fraser's extradimensional trip is the real show-stopper, though: It initially seems like a run-of-the-mill, slightly hokey frame-step montage, but ultimately accumulates into something truly sensory-warping and otherworldly. Give credit to the uncredited Byron Haskin who, along with effects house Butler-Glouner, made them work as beautifully as they do. Sadly, the effect I remember most strongly from when I watched this episode as a kid—Hartley disintegrating in the portal device—is practically ruined by yet another spoilery teaser. 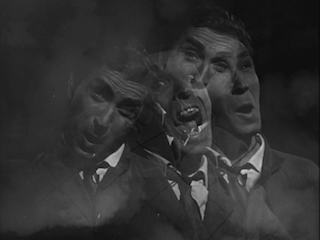 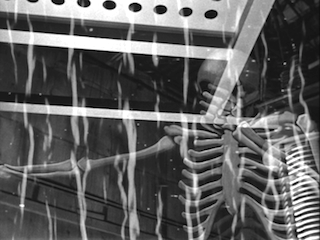 But despite its solid effects "The Borderland" is still an unmemorable slog, bogged down by a continuous loop of talky, pointlessly amped-up lab scenes (also a feature of "Production and Decay") and a distracting milieu of wealth, power, and social rank, something The Outer Limits rarely indulged once Stefano was in charge. The episode quite literally goes nowhere, and what lingers most about it for me is a throwaway line from its opening Control Voice narration—something about the "wish to cross the borderlands that lie beyond the Outer Limits."

I don't know about you, but if there's something even further out and alien than what we experienced in this series, I'm game a spinoff.

Mark Holcomb writes about movies, television, books, and general pop-cultural ephemera for The Village Voice, The Believer, Time Out New York, Salon, and whoever else will have him. He first watched The Outer Limits in its original run as a highly impressionable, temperamentally morbid three year old, and hasn't been able to shake it since (not that he's tried). He and his twin brother, David, indulged their fascination with the series back in the pre-blog '90s, and their efforts live on here courtesy of David J. Schow.
Posted by John Scoleri at 2:21 PM