by Larry Blamire
When I was a kid I didn't know from soundstages.  All I knew was that uniformed men walked in a straight line to sour and discordant percussion in a featureless limbo that may be Hell or may be Purgatory and if one of them panics and breaks rank then a demon with a wand will steal their voice.
I'm conflicted about teasers, seeing them now as spoilers but still recalling their almost supernatural power when I was a kid.  They were really quite electrifying, and it's hard to shake that initial tantalizing glimpse through a forbidden window, in this case ending on a huge close-up of Martin Sheen's silent moving mouth (another that stuck with me was the "Bellero Shield" opener, with that weird alien mouth moving—what's with the scary mouth stuff?).

Stealing someone's voice was somehow more disturbing than all the murders on Perry Mason.

Revisiting "Nightmare" I realized I'd seen it—as well as my other favorites—at least twenty times over the years.  While thinking of a fresh take on something so beloved and familiar for this "Spotlight On", it suddenly dawned on me that I had not really stopped to consider the influence this episode (or Outer Limits) has had on me.  At least, not in a long time. 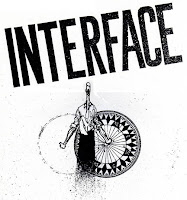 I spent the 80s working in theatre and in 1984 I wrote and directed a play called "Interface."  It concerned a military unit, volunteered for a top secret experiment in invisibility.  When things go wrong, they are kept confined and, when the scientists are unable to help, eventually forgotten—smothered by layers of secrecy.  The set was a simple but shadowy lab with large windowed chamber, the lighting dim and somewhat noirish, the sound design atonal and electronic, and the cast an all male ensemble.  The volunteer subjects are essentially "ordinary guys" in an extraordinary situation.  As I recall, one review even mentioned The Outer Limits.  Hell, it was a freakin' Outer Limits.  Without the bear.

At that time I was probably still aware of the show's influence (earlier, while acting in Sam Shepherd's "Angel City", I created a mask for my character's transformation into a lizard man that was clearly influenced by Wah Chang!).  But sometimes we just take these things for granted over the years and then just tuck that memory away.  I don't know if I've ever pinpointed this particular episode, but now the correlation seems obvious.

"Nightmare" has quite simply one of the finest ensembles assembled for television doing one of its finest scripts.  It's a gift to be able to read Joe Stefano's cut material in the DJS book (and David has carefully laid out the script's consistent "gamedropping").  Essentially it's a classic "life raft" drama, with a group of men (or women: see Cry Havoc) in isolation attempting to survive against threats both without and within (Sidney Lumet's The Hill another a great example).  It feels like a play, a piece of black box theatre, with its confined and empty spaces and its vivid and affecting speeches.

The acting on display betrays the prep that went into it.  Martin Sheen brings star-making intensity and sensitivity to his early role as the edgy Private Dix, baring his soul in the anguished scenes with his "mother".  I remember being happy to see James Shigeta, an actor I've always liked, years later in Die Hard, still going strong.  He imbues the poetic Major Jong with a necessary quiet charisma that keeps his irony subtly grounded.

I think Ed Nelson has far greater chops than most people realize (his twitchy grinning sadist who makes the mistake of messing with Lucas McCain's son in The Rifleman/"The Shortcut" is enough to make you forget his good guys—see?  I got westerns in here).  Here he's the perfect embodiment of the stalwart team leader, but with lurking darkness and doubt—even a suggested loathing for his own men.

Bill Gunn's speech about the dead Krug is a show-stopper.  How many, upon reflection, thought they actually saw the picture he painted so devastatingly?  Olivier once said about acting something to the effect of, "do the unexpected—don't read a line as the audience would expect it." I think of that when Gunn gives that sudden little laugh that still takes me aback no matter how many times I see it.

John Anderson is the last person you might expect to play the Ebonite Interrogator.  But this western veteran was a brilliant actor who managed to make his work look effortless (I highly recommend the epic two-part Gunsmoke "The Raid" where he plays advance man for the biggest outlaw gang ever, including OL vets Richard Jaeckel and John Kellogg).  His great dignity and presence serves the Interrogator well as both (seeming) villain and victim.

The episode title might sound generic but it quite aptly describes the show's bad dream quality, which I alluded to in my childhood impression of the bizarre teaser.  The simplicity of its bare bones set may have sprung of necessity but it suggests a world that's cold and harrowing.  Like much of OL there is a strong sense of dreamscape, as though we're all prisoners of a tapped subconscious come to life.  Visually, Ebon could almost be a creation of surrealist painter Yves Tanguy.  I believe this subtle surrealism is one of the reasons the series continues to resonate and linger long after a viewing. 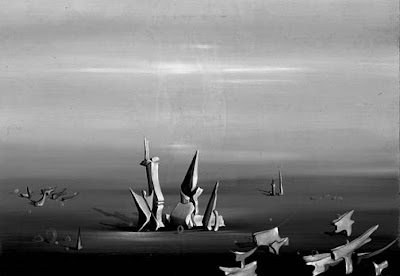 Then there's the Grimm's Fairy Tale aspect  The wand that can steal your voice or vision is clearly explained—and believably so—as Ebonite science, controlling the senses.  Yet it's disturbing in a non-scientific way, a thing that witches should be able to do; a metaphysical assault that trumps even the psychological assaults of earthbound torture.  This also applies to Jong's pulverized arm, probably the most painful to watch (I still marvel at the way Shigeta sells it; there seem to be no angles left, it looks for all the world like a soft curve from shoulder to pocket).  Then there's Dr. Whorf's second appearance, no longer Dr. Whorf, but a Cheshire Cat on a wall who's just suddenly there, making his reality as questionable as Dix's phantom mother.  Finally there are the Ebonites themselves, demonic and bat- winged.

OL rookie director John Erman may have had to ride John Nickolaus to get him to shoot imaginatively, but the end result is sometimes striking, as in the off-kilter camera when Sheen breaks rank.  There is no question Erman worked brilliantly with his actors, but it would be fascinating to view his cut prior to Stefano's reworking.  The stagey quality that perhaps troubled the producer has never defused its power.

Frontiere provides the series with one of his most distinctive and haunting scores, an all too fitting combination of idyllic impressionistic spacescape, lilting yearning melody, and that sour (sorry, it just seems the right word) militaristic percussion.  The sound design/editing is extremely creative, particularly in the interrogation scenes.  In fact, no sound from the show has stuck with me like that slow, queasy, monotonous bending-note whine that provides the room's disconcerting ambiance.  No matter the hallucination, no matter the outburst—we always return to it, a reminder of the setting's utter hopelessness, in itself a torture.

The Ebonite masks once again illustrate Projects Unlimited's (and particularly Wah Chang's I think) genius for presenting something alien at the limitations of budget and the human face (why OL has given us more memorable creatures than any TV show in history).  I noticed again just how lofty those damned heads are.

The only thing I question is the early reveal of the Unified Earth brass (Whit Bissell and Willard Sage).  When first seen (and hallucinatorily not seen), bookending the Interrogator through the glass, they can be ascribed to a number of things; collaborators from one of the alluded prior missions, more hallucinations, etc.  But when shown reviewing the test subjects, practically taking bets on who will crack, well—while successful at portraying their callousness and disregard, it pretty much spills the beans.  I can't help but wonder how much stronger a later reveal might have been.

I see "Nightmare" as a member of OL's Paranoia Quartet, along with "O.B.I.T.", "Corpus: Earthling" and "The Invisibles".  Of course the show's themes on sacrifice, "the greater good" and mistrust of authority resonate to this day.  And ultimately, there is something both satisfying and telling about what we perceive to be the evil-looking Other turning out to be benign, or at least far more complex than we first believed.

LARRY BLAMIRE is an actor, writer, director, and artist.  Born in Liverpool, raised in the US (though still often referred to as the 46th Beatle), he is responsible for such feature films as THE LOST SKELETON OF CADAVRA

and TRAIL OF THE SCREAMING FOREHEAD.  Larry has worked as a sci-fi illustrator--several pieces from his epic STEAM WARS film project appear in the newly published SCI-FI ART NOW—as well as a surrealist painter.  He is also a published playwright—his version of ROBIN HOOD having been performed all over the world.  Larry's western horror short stories are collected in TALES OF THE CALLAMO MOUNTAINS

.  He is married to actress Jennifer Blaire and they recently had a son Griffin and live in relative normalcy.
Posted by John Scoleri at 2:00 PM