The Hundred Days of the Dragon 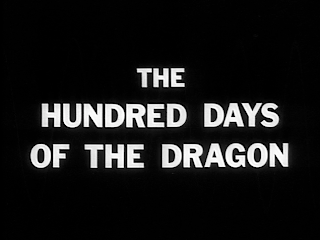 Using a very effective (Russian?) drug, the Chinese government manipulates an operative's facial characteristics to resemble a leading candidate for President of the United States. Once he gets elected, they just need to do the same with a few more key political figures, including the Vice President, to finalize their plans for world domination. 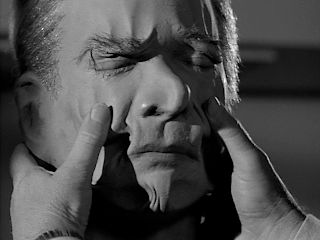 JS: Tonight's episode is brought to you by Silly Putty™! If only they had rolled his face across the funny papers, first.
PE: I'm embarrassed because I seriously thought that it was Kenny Rogers. In an alternate reality (I like to think of it as the Enfantinoverse), the henchman who carries around the face molds is also a wacky baker who accidentally brings his cake tins to America.

JS: Seriously, with such technology, why bother with politicians? Head to Beverly Hills, get rich doing plastic surgery to the stars, and buy your way to the top. Just imagine the body improvements you could do... on second thought, don't.

PE: The head scientist is something of a smug little bastard, smirking and smiling, considering he's "performing" in front of a tyrannical despot who, ostensibly, likes to cut pieces off those he finds disfavor in. 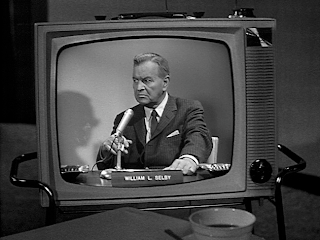 JS: I have a bit of an issue with President Selby (Blackmer) being described on TV as the most eligible bachelor. I've seen Jack Kennedy, and you're no Jack Kennedy, senator (and a Presidential nominee with a cigarette burning on TV? Definitely the 1960s. -PE).

PE: No, he's no hunk but Blackmer is a solid casting choice. He's very presidential in looks and poise. My only criticism is that when he's questioned about new habits, he gets beady-eyed and frowns. And when he's watching the concession speech on TV, is that an "Oriental look" on his face? Of course, our last sighting of Blackmer was as the cataleptic Edward Stapleton in Thriller's "The Premature Burial." I thought the whole cast was on the money, in particular Philip Pine as the suspicious Vice President, Ted Pearson. He must know the old man better than the President's own daughter since he's the first to smell a rat.


JS: This was a fun political thriller, and forgiving the press-and-go face plates/jello molds, it had plenty of exciting twists and turns. It certainly ratchets up a notch when the Vice President (Pine) comes face to face with his would-be replacement. I liked how when he starts to understand what's going on, they plan to exhume the president to have his dental records checked, only to have that plan thwarted.

PE: What have we seen so far in The Outer Limits? Straight sci-fi. Noirish sci-fi. Monsters. Comedy. And now political thrills ala The Manchurian Candidate. Sounds like a show in search of an identity. "The Hundred Days" is a solid political/espionage thriller (better than it had the right to be, as a matter of fact) obviously inspired by the James Bond craze sweeping the nation at the time. You could see 007 involved in a fantastic plot like this. The show also obviously owed a debt to Invasion of the Body Snatchers. The President's daughter and son-in-law finally catch on and voice their concerns to the Vice President ("He's polite. He remembers all the right anniversaries and birthdays. But it's as if he's turned to stone. Suddenly I don't love him anymore") followed by a solid, creepy scene when Pearson comes face to face with his "replacement." Both these scenes mirror similar scenes in Invasion of the Body Snatchers.

JS: I didn't think they sold the gratuitous rattlesnake scene very effectively. Blowing away a snake at point blank range with a shotgun didn't impress me as requiring the skills of a marksman.

PE: Spoken by a California boy who's never seen a gun up close, let alone a vicious, deadly, venomous rattlesnake. (You're right about the snake, but I'd bet even a non-gun toting Arizonan like you could take out a rattler if your life depended on it. -JS) 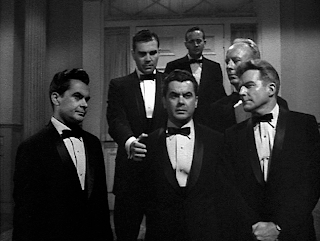 JS: What's with the dearth of secret service agents throughout this episode? Fortunately they were all back on the job in time for the finale.

David J. Schow on "The Hundred Days of the Dragon": 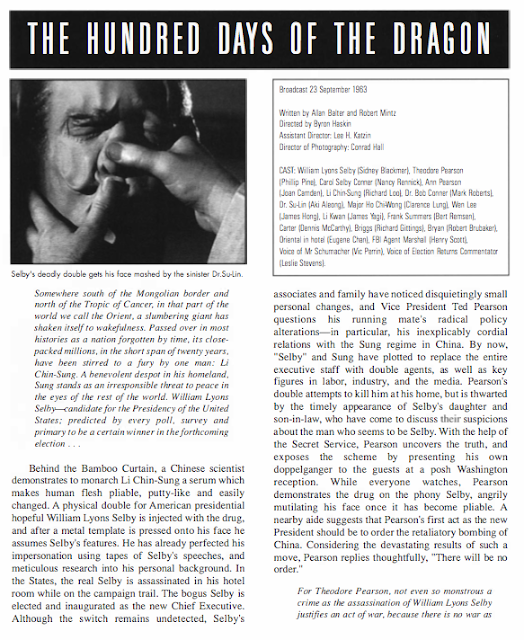 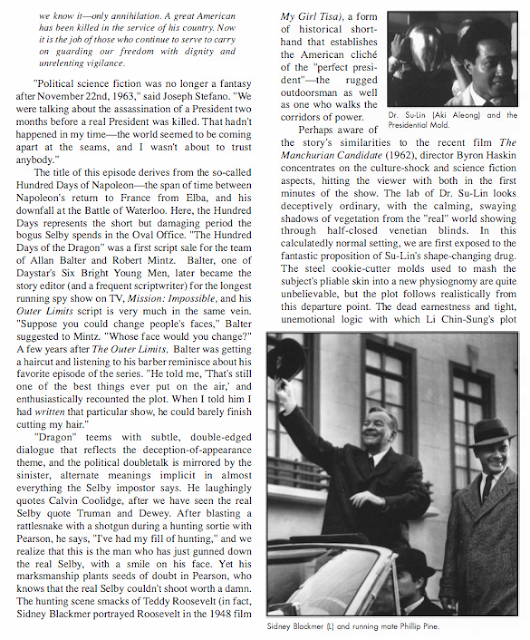 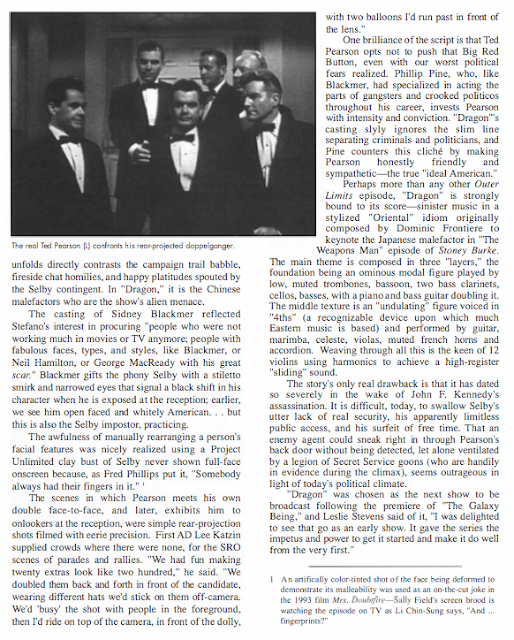