Spotlight on "The Zanti Misfits"


SPOTLIGHT ON: “THE ZANTI MISFITS”
Another chat with STEVE MITCHELL


Hi, Everybody! Here we go again with another commentary with me interviewing…me… about our favorite episode of THE OUTER LIMITS: “THE ZANTI MISFITS”
INT:  Hi, Steve! Thanks for going through this with me again.
STEVE:  No problem, Steve. This is after all, “The Zanti Misfits,” our favorite TOL outing.
INT: We’re nuts for it actually. You just watched it, soooo…how do you think it holds up?
STEVE: Really well. It has been quite a few years since I saw it last, and, frankly, I was worried that it would not be worthy of my unbridled enthusiasm. Often when you get to revisit TV faves created decades ago, time is not always a friend of the show. The style of the day regarding the writing, shooting, and acting, does not always “play” compared to shows on the air today.
INT: That is often true, but I have found that really good shows from back in the day are still generally good, if not even very good when watched today. The Zantis still hold up nicely.
STEVE: Good point, Steve, but that is not always the case. You know that.
INT: Giving me a hard time already? Anyway, let’s talk about when you first saw this show back on December 30, 1963. (Date courtesy of DAVID J. SCHOW’S masterpiece: THE OUTER LIMITS COMPANION.)
STEVE: I watched this show, as I usually did, alone and in the dark for that movie-theater-like experience. The teaser hooked me right away: you had Air Force personnel, a distorted and threatening alien voice, then a look at the alien spacecraft…a nice selection of my favorite TOL food groups. I was excited.
INT: It didn’t take much did it?
STEVE: I was a kid, for cripes’ sake! Also, not showing the ZANTIS was a smart move.
INT: Worked for me. Another interesting move was to transition from the clearly 1950’s SF tease to a great shot of an old Western town…
STEVE: Really knocks you off balance for a moment, until that Ford Galaxy races down that dusty backlot street. 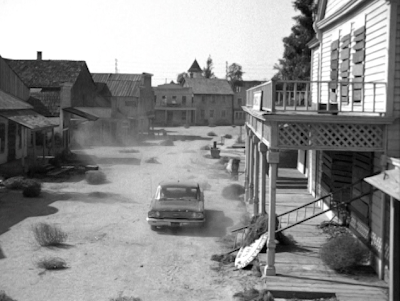 INT: That was a nice storytelling curveball.
STEVE: Stefano was good at that.
INT: Let’s talk about the cast; some familiar and not so familiar faces.
STEVE: Michael Tolan was a guy I never saw before. My guess is that if I had watched a lot of ten o’clock dramas, especially those produced in NY, I would have known him. He looked like a smart guy and it was easy to buy him as a historian. May be one of the only times a historian was the protagonist /action hero in a network show.
INT: As a kid, I always got a weird vibe off CLAUDE WOOLMAN, and I remember thinking that he could have been an alien in human clothing. We did not know what the Zanti’s looked yet.
STEVE: Stranger things have happened on TOL! I was also half convinced that Woolman, at some point, might peel off his human face and reveal something other worldly. 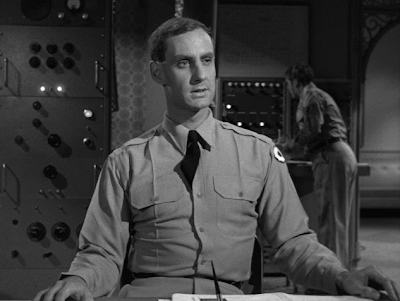 INT: Kind of a goofy thought even for a kid.
STEVE: You would know.  Anyway, Woolman was not what I think of as a typical TV choice to play a military officer, especially one who was as hawkish as he was. PETER BRECK, or NEVILLE BRAND, for example, might have been better cast in that kind of role.  But Woolman certainly made it work.
INT: ROBERT F. SIMON looked pretty comfortable in his uniform
STEVE: Like a lot of character guys from back in the day. Simon was a great utility infielder sort of actor with a benign yet firm authority. He had what a lot of character actors brought to their roles; a sense of life lived with the experience and miles to back it up.
INT: This is a fitting description for OLIVE DEERING.
STEVE: And how! Did you know she was ALFRED RYDER’s younger sister?
INT: Check out “THE BORDERLAND” which was Ryder’s single TOL appearance, and you can see the family resemblance.
STEVE: Interesting that she has only three film/TV credits after her stint in this episode. Talk about gravitas, Ms. Deering really had the weight of the world on her shoulders. She really embodied how we “puny” humans have the capacity for self-loathing and destruction. A very haunting performance.
INT: Let’s not forget BRUCE DERN.
STEVE: How could we?! Part of why it is fun for me to watch older shows are to see stars in their larval stage(s). Dern really had the goods and that is what made him so effective in a small role. Sure his bread-and-butter was playing creeps and bad guys, but he was a canny screen actor and the camera always seems amused by him.
INT: So was the audience. But let’s put this high falutin’ actor stuff behind us and get to the real stars of this outing…
STEVE: The ZANTIS! Winners of my top five personal scariest kidhood memories!  First, they are creepy because they’re bugs! Bugs were and still are Kryptonite to me. When they attacked our intrepid heroes in the hotel they scared the poop out of me!
INT: Especially when that brave yet dumb AFP officer bounded up those stairs, fired a couple of shots, then reappeared screaming and covered with our alien buddies. 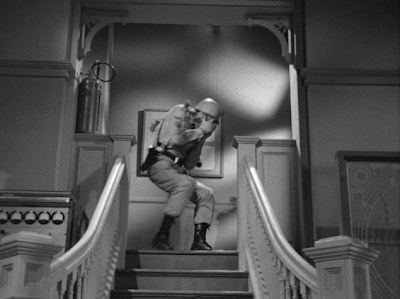 STEVE: I still get chills! In fact that whole climactic action sequence still gives me a tingle. It was also tense and exciting due in no small part to the first-rate direction of LEONARD HORN, who had a short but busy directing career. Sadly, he passed on at 48. He really used a lot of speed and cutting to create a satisfying battle, and waterloo for our six-legged friends.
INT: You are touching on one of the real delights of the series for me, which was the constant use of cinematic techniques to tell the story.
STEVE: Well, every show is really a little movie. The bar was set very high right from the pilot, and the show did not look like TV of the day with the usual proscenium arch approach of most shows.
INT: No matter who shot the episode, it was always hip-deep in clever and dramatic compositions and angles…
STEVE: With such great lighting as well. I will always wonder what CONRAD HALL would have done with this show, just for fun, but JOHN NICKOLAUS really stepped up to the plate and did a swell job, I thought.
INT: You’re getting “arty” again. Let’s get back to the ZANTIS. How did you respond to them as a knuckle-biting kid?
STEVE: Six-legged bugs with human features?! They gave me the heebie–jeebies of course. Props to the sound-effects guys too for the Zanti vocal effects. If you don’t mind, I have a question for you.
INT: When did I lose control of this “chat?”
STEVE: Ever notice that the Zantis have facial hair? 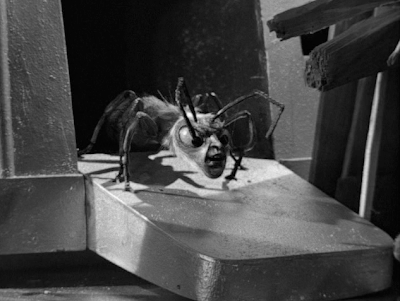 INT: Sure. Such a great design, especially with those demonic eyes as well.
STEVE: I wonder if they were meant to have a subtly subversive beatnik sort of quality. Facial hair in the early sixties, especially goatees, were the look beatniks, musicians and artists had; kind of a counter-culture ID badge, if you will.
INT: The Zantis, right out of the spacecraft, were a menace to normal, decent earth society.
STEVE: Clearly these beatniks needed to be exterminated! Once again, TOL taps into societal fears that were a few years down the road before beatniks sort of morphed into hippies.
INT: One of the things I noticed on this viewing was the stop motion Zantis had very little screen time.
STEVE: Too bad, because a few more shots, especially in the climax might have been cool. Time and money probably limited the number of shots, but the PROJECTS UNLIMITED gang deserves a shout out for a job imaginatively done.
INT: When you are right. We’re running out of time so…final thoughts and rating?
STEVE: One of my favorite “monster movies” of all time. Sure the Zantis were small but they were deadly. I did wonder, even as a petrified kid, if they bit their victims to death or stung them? I should have asked JOE STEFANO when I met him years ago.
INT: I can’t believe you didn’t!
STEVE: When you’re right. Anyway, this was a snappy hour of suspense, fear, and action with an interesting moral question as well: What makes humans so good at destroying themselves? Just as interesting a question today as it was nearly a half century ago.
Our Rating: 3 and ½ Zantis
Posted by John Scoleri at 2:00 PM