Spotlight on "Architects of Fear"

No attempts at cleverness or irreverence here.... not with this particular show.
I think there was a definite reason that the Cleveland TV station blacked out the shots of the Thetan during its broadcast premiere on September 30, '63.  Certainly there would be other OL aliens that looked as hideous. But this one was different: this monstrosity was.. or had been... a man—a real human being—an attractive, intelligent, idealistic young scientist married to a warm and loving woman, an ideal upscale '60's couple if there ever was one, and Meyer Dolinsky's masterful teleplay gave us just enough time to get to know them and perhaps see something of ourselves in them. And there's something that is profoundly disturbing about this premise, something that gnaws at one's psyche.
When I saw this show on that same night, my own young life was hitting a real low, and I had little interest in its moody, morbid quality.  I had seen the cover of Famous Monsters #26 and the TV Guide article with the Thetan costume sitting next to Joseph Cotten, but the show itself proved to be too dense and "adult" for me to appreciate.  This would all change dramatically, but not until the fall of 1978, when an eloquently written article by author Ted Rypel in Fantastic Films magazine suddenly ignited an intense interest in searching out OL; and wouldn't you know it? Within a week, a local Chicago UHF station began to run the series.  (Ultimately, it was Mr. Rypel who modestly admitted that he "could take me no further" in my quest for knowledge about the series, but that the guy who could do so was at the time working on a major OL magazine article in Oak Park, Illinois... but that's a story for another time).  In any event, when I finally was able to catch the "Architects" syndicated broadcast in early October, '78, I sat stunned, and later that day took a walk to ponder the experience.  I realized that I had rediscovered a one-of-a-kind masterpiece of small screen drama, the likes of which had never been dreamt of at the time it was made.
Originally broadcast within a few weeks of the 1-year anniversary of the Cuban Missile Crisis (which I also remember quite well), the premise of "Architects" easily fed into the all-too-real fear of nuclear annihilation.
But what of that picture-perfect pair of soul-mates, Allen and Yvette Leighton?  Basically, they had two major problems: 1.) He was altruistic to the point of self-destruction and 2.) She was unable to bear children.  And thus, Dolinsky sets the stage for a most harrowing and unforgettable tale, deftly weaving these plot threads together, as the best-laid plans of "The Architects of Fear" begin to unravel.  The misguidedly heroic Allen's role as potential savior of humanity—which necessarily will destroy his private role as a loving husband/provider, is derailed emotionally for him (and for us, the helplessly captivated observers of this drama), once his wife unexpectedly reveals that she can, at last, bear his children, and thus make their private, personal dreams a reality.  But by then, it is too late— for, unbeknownst to her, Alan has already begun to undergo the unthinkable, horrific process that will erase his humanity and transform him into the doomed "scarecrow from another world". 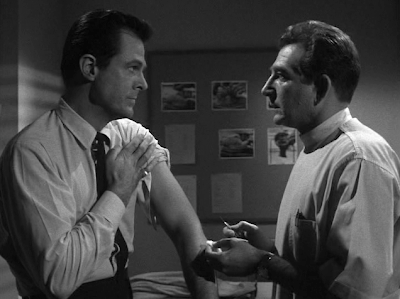 Again, the brilliance of the script is front and center. That fatal injection... the first step in the process of physical transformation from which there is no turning back.... is seconds away from being administered by Alan's team leader, when… what do we hear?... the cheery voice of his wife, come to meet him at the office for an impromptu lunch date on a beautiful, sunny day. The unbearable tension of the brief exchange between Culp and Leonard Stone is but one of the many gut-wrenchers that must be endured in the course of this show.  And it turns out that Yvette has some good news to tell her husband, and a casual stroll past the local maternity shop might just be the perfect way to do it. 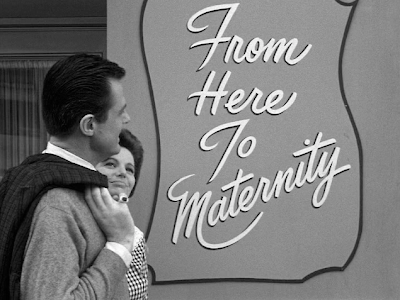 "The Architects of Fear" is, for me, the supreme example of what OL did so well...in this case taking an impossible premise and, through the sheer brilliance of its execution, grabbing the viewer by both the throat and the heart, while brushing aside the inconsistencies and simplistic "scientific" trappings of the story in the process. 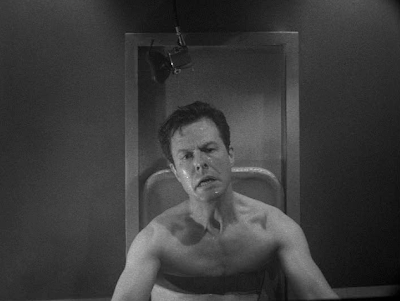 Robert Culp's performance is beyond brilliant, so tightly wound, incisive and absolutely "real" a character he brings to the screen.  Byron Haskin, Conrad Hall and the cast were obviously in total synch for this amazing 5-day shoot; the scenes between Culp and Leonard Stone are masterful examples of low-key tension that still seem on the verge of exploding.  To watch Culp heaving and gasping for air in the compression chamber, to witness his jaw-dropping tour-de-force "Mad Scene" in the lab (a sequence tailor-made for Culp's avant-garde sensibilities as an actor, culminating in his heart-rending cry to his unborn son), to suffer along with Geraldine Brooks, herself suffocating as she collapses in her late husband's office, at the very moment he stops breathing on the operating table directly across the hall.  I mean, seriously, folks.... how much is the viewer supposed to be able to take of this sort of thing?? And how in God's name did this show ever make it onto network TV in 1963? 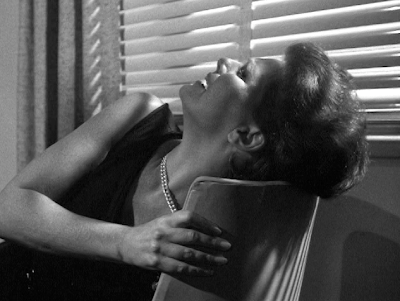 The shared psychic bond between Culp and Brooks (and the "mark against evil") is another great element in the script, used sparingly and to great emotional effect.  The only scene in the entire show that has a remote sense of calm or repose is the final evening at home between the lovers, just prior to Culp's departure and his faked death. It's dark, moody, somber... and Brooks plays it with the exact right mix of resignation and ominous premonition.  Here, composer Dominic Frontiere, himself a well-known jazz accordionist, uses the instrument in an unexpectedly effective way, its bluesy, melancholy sound alternating with two flutes and a bed of lush strings, in a most touching melody... perfect for this sad tale of ill-fated lovers, who will meet one other only once more before the final credits. 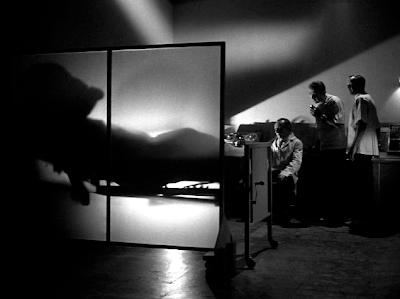 The end of Act 3 scene on the operating table, with Culp in his final alien form, is perhaps the most numbing thing in the show. Imaginatively revealed in silhouette behind a surgical screen, his disembodied voice piped through a primitive speaker, (and the "blasting" volume of the audio hookup, which causes the pathetic figure to lurch in pain—how much more can the poor guy take?), the now-transformed Allen shares his final thoughts with his colleagues, before being loaded into a casket as an undercover mode of transportation to the secret launching pad.  The traumatic quality of this episode—sometimes overt, other times subtle... never seems to let up.
And, playing on the common dread of surgery that most of us share, to have watched this guy being physically re-built, bit-by-bit, in a desperate attempt to avert a nuclear holocaust, a wildly improbable, madly concocted plan that required a single brave but foolhardy volunteer to willingly sacrifice himself... to see it all come crashing down before it ever had a chance to work.... without a single UN delegate laying eyes on the supposedly menacing alien from the planet Theta... is the cruelest sort of irony, a bitter, devastating denouement in the manner of the classic, fatalistic tragedies.
And then there's the Thetan design/suit, itself as wild and improbable a concoction in real life as the "Architects" own plan, which... I must admit.... brings the overall quality of the episode down a notch. Too bad.  Or does it? On second thought, it might be exactly what was needed as the climax to this tragic tale.  How could such a reckless plan have produced anything but a bizarre, patchwork monstrosity that flails its skeletal arms about while clumsily hopping like a bird, clumping its way down the blood-soaked stairs of the lab, the only possible refuge for the dying Allen Leighton... it's so pathetically sad.  And the final realization... as DJS so artfully puts it: "to try and unite the world [the group of scientists] destroy the already-perfect union of two people. Instead of bettering the world, they kill one of the small, good things left in it."
A small thing that, in a cosmic sense, is actually vast and universal in nature... that might have prevented this pitiful loss had it been recognized and embraced.  And as Yvette Leighton tenderly lays her cheek against the ghastly, bloated, scaly head of what was once her husband, a uniquely powerful piece of television history—practically thrown together by that team of gloriously mad men Leslie Stevens had assembled during that legendary time, comes to an end. For me, OL would never equal it. 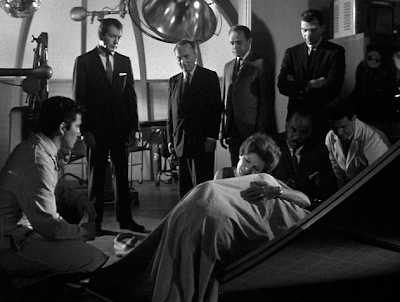 Larry Rapchak is conductor of the Northbrook Symphony (IL) and a composer, whose works have been commissioned and performed by the major orchestras of Chicago, Cincinnati, Louisville, Detroit and Helsinki.  His opera The Lifework of Juan Diaz (yes, the same story adapted by Ray Bradbury for Hitchcock's TV show in 1964), written in collaboration with the author, was premiered by Chamber Opera Chicago and released on Albany records.  The opera is, according to the composer, the only one in the repertoire featuring a mummy as the lead baritone. Rapchak has an intense interest in certain popular things of the past, Thriller and Outer Limits among them.
Posted by John Scoleri at 2:00 PM