The Man Who Was Never Born 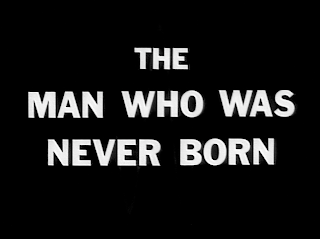 Andro (Landau), a man from a future Earth must travel back in time to prevent the birth of Bertram Cabot, Jr. by any means possible. Cabot will grow up to turn the world into a wasteland. Andro lands on the eve of the wedding of Cabot's parents (Knight and Considine) and must decide if he's capable of murder to save the future generations. 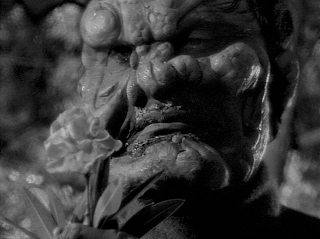 PE: In the immortal words of the poet Neil Diamond: "Did you ever read about a frog who dreamed of becoming a king, and then became one?" I think Neil must have gotten inspiration for that song from "The Man Who Was Never Born."

JS: What a beautiful sentiment, Peter. I think Noelle was inspired by the immortal words of Katy Perry, "I kissed Andro and I liked it."

PE: Speaking of inspiration: There's a signpost up ahead: JAMES CAMERON WAS HERE! I dig these "changing the future by visiting the past ain't all it's cut up to be" dramas. The Final Countdown. Timecrimes. Back to the Future. Triangle. And of course that little franchise that was cut-and-pasted from The Outer Limits. EC Comics peppered their three sf titles, Weird Fantasy, Weird Science, and Incredible Science Fiction/Fantasy with stories about scientists who are visited by their future selves to help figure out complicated theorems. Who doesn't love stuff like that?

JS: And it is done effectively here. To be honest, my first inclination was that (in James Cameron nonsensical time-continuum fashion) Andro was tricking Astronaut Steve, I mean Reardon (Karl Held), to take him back in time so that he could cause the Earth's destruction. Of course I do have a bit of a problem with Andro's scheme. Forgetting about Cabot, Jr., doesn't it seem like a bad idea for someone infected with the nasty bacterium to go back in time and potentially introduce that to the Earth of the past? Of course then, when at the end he doesn't disappear, Andro would realize that he was in fact the cause of the great DNA corruption (again, go with the don't-make-me-explain-it-just-accept-it Cameron time travel logic). 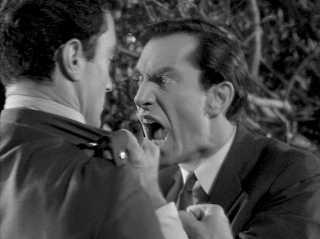 PE: The acting here is all top-notch. I've never been able to warm up to the young Martin Landau. I'm sure I'm in the minority (as the still-burning pigeon carcasses on my front lawn show) but he's usually a scenery-chewer. Coincidentally, I just last week watched Landau as a mass-murdering sheep herder in the short-lived TV western, Tate (shout out to reader/commenter Ultimate Tactical Warrior for steering me to this nasty, gritty, wonderful show). Landau's eyes bug out while he emotes (and sweats) up a storm. With his performance as Andro,  there's no trace of hambone,  just the right dollop of pathos. You can really believe he'll do anything to save the future children, even kill the woman he loves. Shirley Knight (who, when this show aired, was already a two-time Oscar nominee) and John Considine (still a decade away from being a superstar thanks to Doctor Death, Seeker of Souls) are also very good as the bewildered couple. Considine very much resembles the young Clint Eastwood. 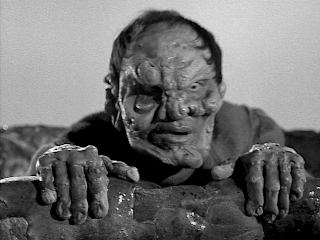 JS: When we first get a glimpse of Andro, I thought—we've landed on Luminos! While the make-up design is similar to those rocky rascals, I think it's far more effective here than the masks with a hole cut out for the mouth used in "A Feasibility Study." Production wise, there were a number of nice touches in this episode, such as the single shots where they switch between Landau-Andro and Ugly-Andro. A favorite is the scene where Andro goes around the room in the boarding house feeling the things he's never seen before. Hell, I even liked the backdrop painting extending Andro's library to infinity. 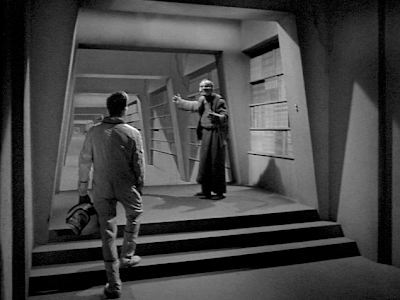 PE: I don't have very many smart-ass things to say about this episode, I'm sorry to say. It's got its faults (Even after a crazed Andro threatens Cabot, there's Andro in the boarding house the day of the wedding; Noel wants to run away with a guy who was about to blow her or her fiancee away just ten minutes earlier; this after suddenly realizing she's never loved Cabot, which stretches credulity) but I can overlook them as I think this is a fabulous show, one that had eluded me through the years. That's okay though, as I don't think I would have appreciated its nuances as a youngster. 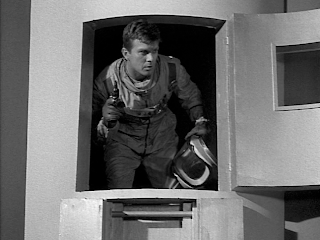 JS: How about the shot of Reardon climbing out of his space capsule, gun in one hand, helmet in the other. Why even bother with the helmet? In case he decides later the atmosphere is not breathable? Oh wait, that's right. He needed something to put his gun in! I also found myself troubled by Andro's inconsistent ability to disguise himself. Several times it appears he has to consciously brainwash folks around him, and yet in the scene by the lake, Bert first sees him as he truly is, and then as Landau, before Andro even knows he's there. And if he's supposed to have a hypnotic radius, it was a heck of a lot shorter when the landlady walked in on him. 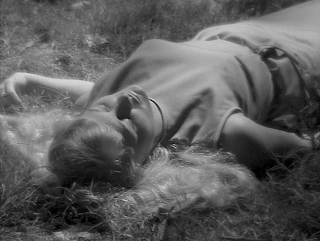 PE: Wow, that climax leaves one of the biggest question marks in TV history. Sure, we know that Andro has faded away, a victim of his own changed future/present/whatever, but where does that leave Noelle? She's adrift in a ship she doesn't know how to pilot. The air won't last forever. I didn't see a fridge or a mini-bar. A very sad ending. Only one other celluloid time did I wish the downer could be changed to a happy ending (that being Brian DePalma's Carrie).

PE: Could this be the perfect Outer Limits?
JS RATING:

David J. Schow on "The Man Who Was Never Born": 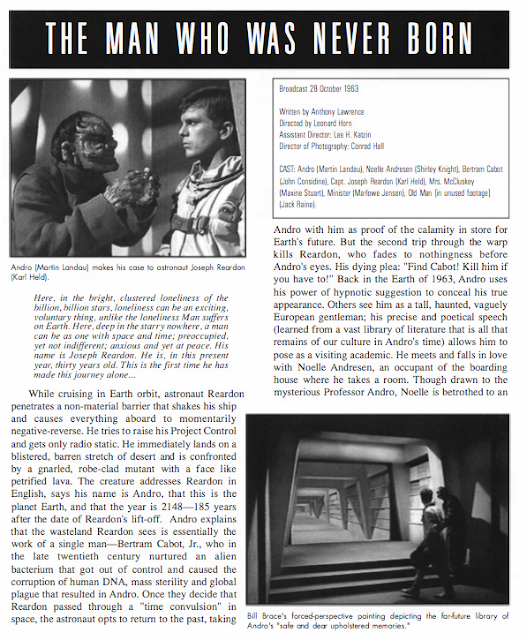 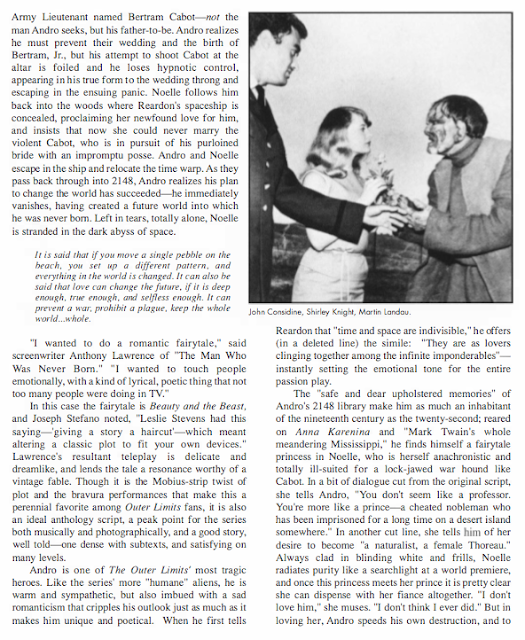 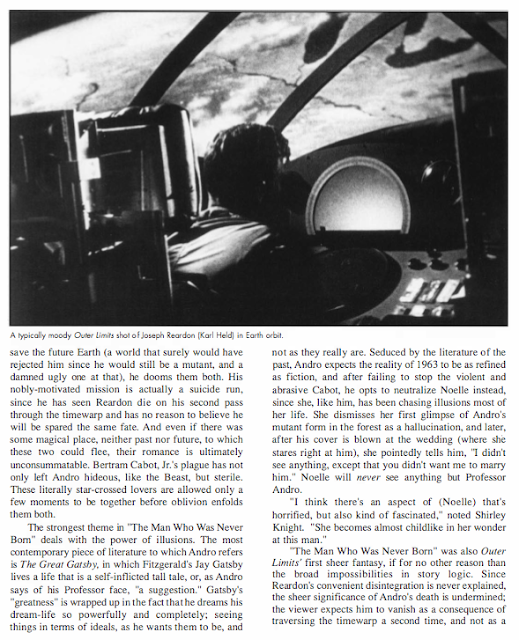 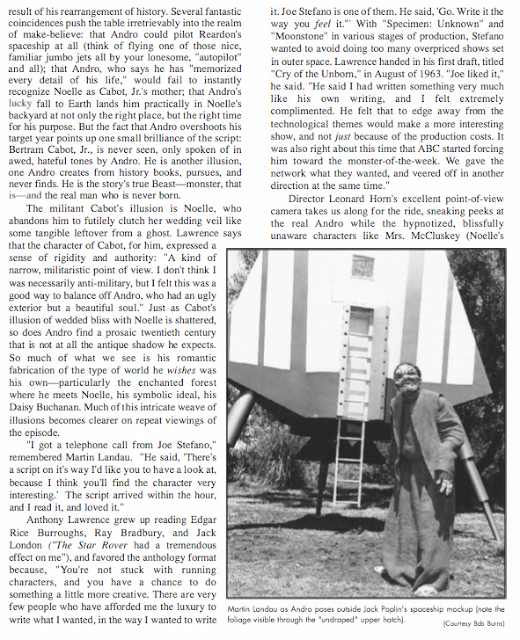 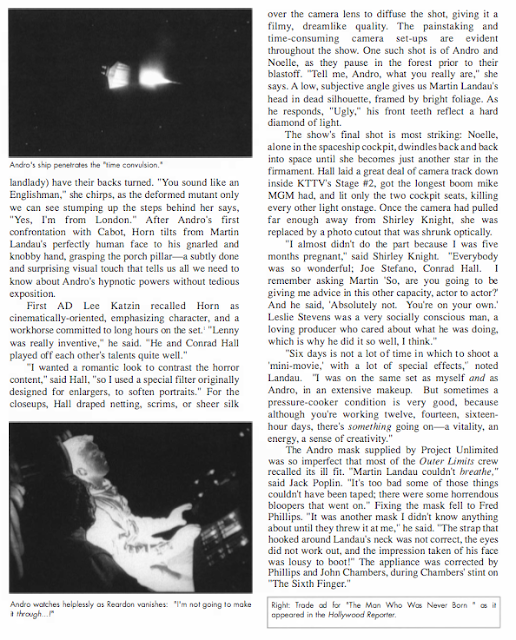 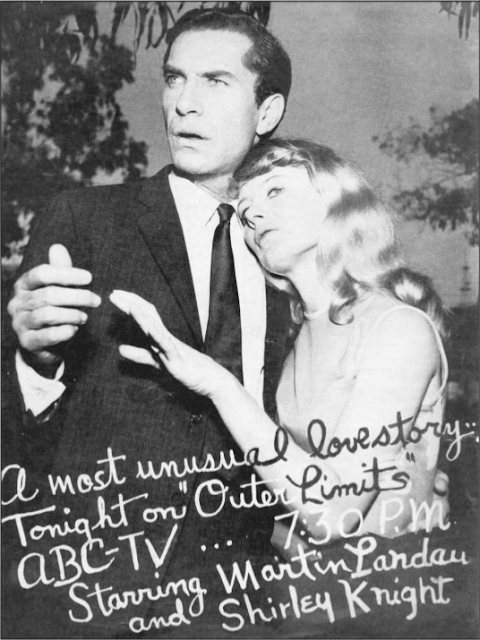 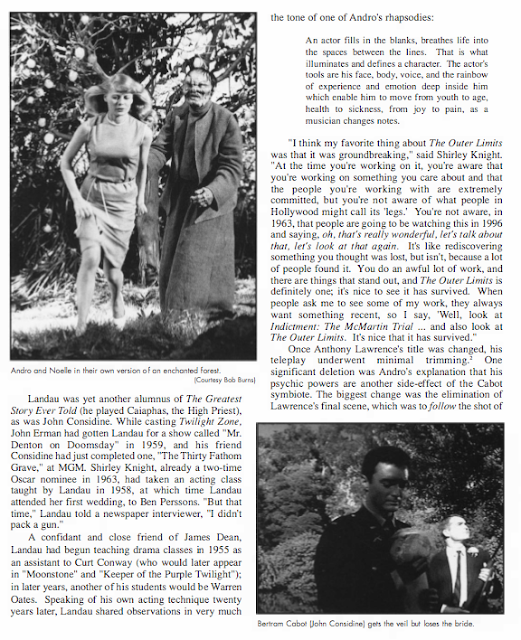 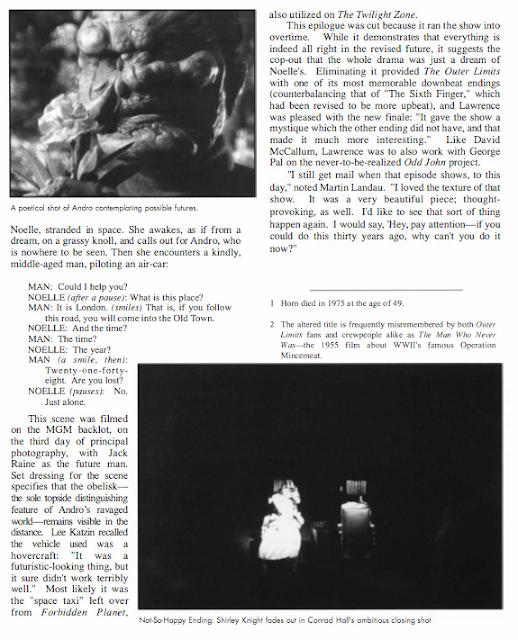 
Be sure to check back later today for Gary Gerani's Spotlight on "The Man Who Was Never Born." 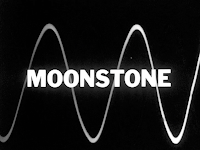 Posted by Peter Enfantino at 6:09 AM