A Musical Spotlight on "Nightmare"


FRONTIERE'S SCORE FOR "NIGHTMARE"  - An overview

Recorded Wednesday, November 20, 1963
The music section (pp. 133-139) of David Schow's "Outer Limits Companion" contains about as much detailed info on the 1st season scores as anyone would need, so I refer the reader to that magnificent tome.  And it's all authentic and accurate, since we had copies of Fronteire's original full scores at our disposal, thus eliminating the typical arm-chair musical analyses and awkward technical descriptions that plague so many film music commentaries.
In the summer of 1984, I serendipitously discovered that the Hollywood music supply company with whom I had been doing business for 8 years was owned by ROGER FARRIS, OL's first season Musical Assistant and Copyist.  I immediately contacted him, hoping against hope that he may still have access to the original Frontiere scores;  "I think they're still all downstairs in my studio," he said, and asked that I call back the next day.
Which I did... and my heart sank when he said "They're not there—-I wonder what I did with them?"  YIKES!  Long story short: he located them, sent me copies of the important cues I wanted to see, three of which I am happy to share here as an WACT exclusive.
The major burning question that I asked of Roger was  "In Nightmare, what was the weird, grotesque, swooping electronic sound in the orchestra???"  to which he excitedly recalled the makeshift, synthesizer prototype created by John Elizalde especially for the episode that looked "like a big studio time-clock";  it was operated by means of a "rheostat-type dial  with the approximate pitches (notes) marked on the dial by masking tape"  and was ingeniously incorporated into the score by Frontiere to produce what is certainly one of the most—if not the most—-unique TV/film scores of all time (this newly invented device was affectionately christened the "ONAFETS", which spelled backwards is......)
Seriously, folks....name another score that creates such an unearthly, dream-like sound world, so totally UNLIKE anything that had been heard at that time.  And, in addition to its ground-breaking sounds (which, oddly, share a certain undeniably funky similarity to "lounge" music of the day—with prominent accordion, guitars, and vibraphone) the score is brilliantly conceived for an outre, avant-gard-ish CHAMBER orchestra, to compliment the stylized, expressionistic CHAMBER PLAY on the screen.
And Frontiere's musical sophistication is further demonstrated by the fact that the instrumentation bears a strong resemblance to the traditional 18th-century BAROQUE orchestral layout——WHAT?!  ARE YOU NUTS?!  But it's true. Frontiere writes for a "keyboard-type" group that plays mostly background harmonies and "busy" figuration, which lends motion and rhythm to the music—just like the Baroque harpsichords and lutes, etc.  But, in the 1963 incarnation we find:  2 harps, an electric guitar, an electric piano, and an acoustic bass serving this function.
Baroque orchestras often featured a group of virtuosic SOLO instruments: take that popular Bach Brandenburg Concerto #2 which has big solo parts for flute, oboe, violin & trumpet.  Yeah, Dominic changed things a bit.....well, a LOT....employing a flute/piccolo, accordion, a violin with an electric microphone attached , another guitar and, for good measure, the creepy, gurgling, groaning, grunting ONAFETS tossed into the mix. So much for tradition!
So brace yourselves: here are portions of three of Frontiere's original score pages. They were obviously written at great speed, then handed over to Farris, who copied each of the musician's individual parts out in his flawless manuscript, just prior to the November session.  If you don't read full musical scores, don't worry; the fun is to see how the visual layout or "architecture" parallels the sound of the music. 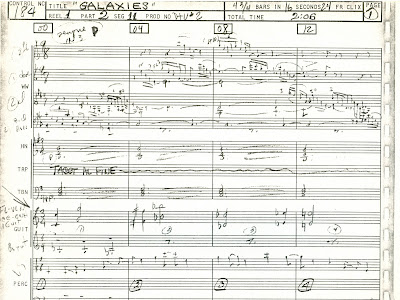 #1 shows the opening musical cue, entitled "Galaxies", heard under Vic Perrin's narration.  Each of the horizontal groupings of 5 little lines is a "staff", and contains one instrumental part;  this full score, then, is the "master diagram" which shows all of the instrumental parts laid out vertically. So, as you read across from left-to-right, everything that you see from top-to-bottom sounds simultaneously.
What's fascinating here is that this very Bernard Herrmannesque-sounding cue was originally written for a BIG symphonic orchestra; the top 4 staffs show flutes, oboes, clarinets, etc (woodwinds, or "WW" in the left-hand margin), the 5th staff shows french horns ("HN" in the margin), then trumpets ("Tacet al fine"—which, in Italian, means they don't play at all).  Point is that THIS LAVISHLY ORCHESTRATED VERSION WAS NEVER RECORDED; at the "Nightmare" session, Frontiere simply used the instruments at hand, notably the harps (not visible in this scan) to provide all of the "sparkly", night-sky sounds.  Note the 8th staff from the top, labeled (in the composer's hand) for the solo instruments: flute, electric violin, accordion, onafets and 1 guitar....all playing the ghostly melody (as you read across). But notice the difference in hand-writing between this staff and all of the stuff above;  that's because this weird-ass melody was ADDED LATER to the big, pre-existing version, when Frontiere decided to adapt this cue for the chamber orchestra of "Nightmare".  The other thing to notice is the 9th staff, labeled "Bs guit" or Bass Guitar, which provides that heavy "plodding" figure along with the tympani.
NOTE:  You can hear this track on the "La-La Land" 3-cd set: CD 2, track 3. THEN, for comparison, skip ahead to track 8, at 1:42—-and you'll hear this same track as recorded WITHOUT the flute,-violin,-accordion-onafets melody track....as it appeared in the opening of "Feasibility Study" for the infamous heavenly badminton space-ship shots. 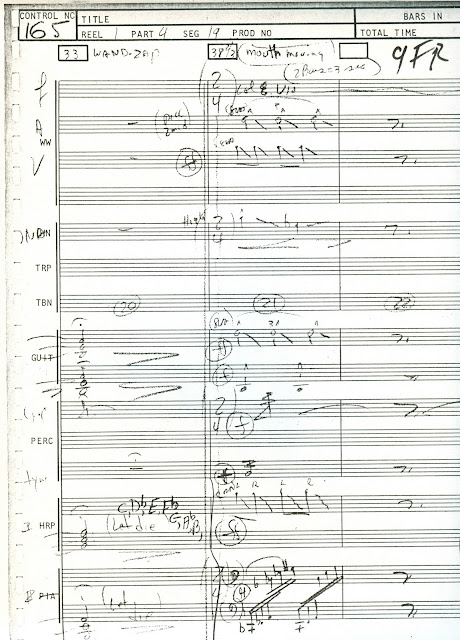 #2, entitled "March Out", underscores the scene immediately after the crew have all stated their name and country of origin, and the first of Pvt. Dix's (Martin Sheen) several freak-outs.  He's sitting on the floor, and you can read the screen action "WAND ZAP" at the 33-second mark in the top left corner; in the next measure, we read "MOUTH MOVING" and beneath it, the orchestral outburst that accompanies the "zapping" sound effect; staves 1-3 show the screeching sounds made by the flute (labled F in the left-hand margin), accordion (A), and electric violin (V), the 5th staff shows the "high" squealing of the onafets (ONA), the 8th & 9th staves show the 2 guitars, the funky thing on the 10th-staff is the suspended cymbal that is very prominent in the mix;  2 staves below is the tympani (kettledrum) roll, and at the bottom, the 2 harps—the upper one is adding to the scraping, screechy sounds with quick glissandos, the 2nd is playing undulating arpeggios—all those quick, multi-note figures.
You can hear this jarring melange of sounds on the La-La Land CD2, track 4— at 0:47.
Pretty amazing how much finely-crafted, detailed work goes into this stuff, right? 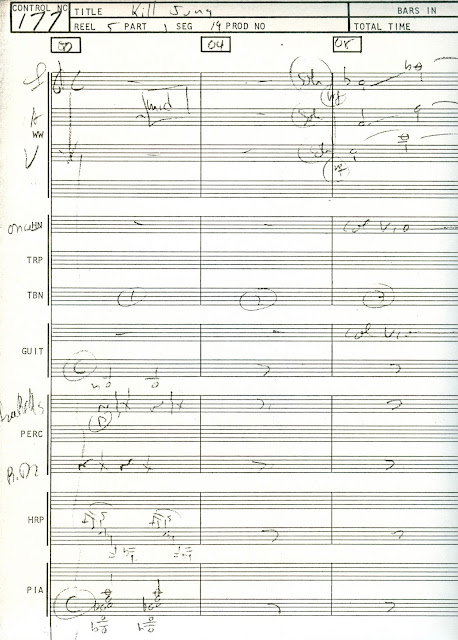 #3 is for me the highpoint in this unbelievably, deliciously demented score—as the crew draws straws and decides that one of them must "KILL JUNG". Frontiere does the TOTALLY UNEXPECTED here, using that quintet of solo instruments: flute, electric violin, accordion, guitar, and onafets...in 3-part harmony to create a luminous, alluring, exotica-tinged thing that has always reminded me of Hawaiian music.....does it represent Jung/James Shigeta's onscreen persona?  Or is it just Frontiere's soaring imagination tapping deeper into the phantasmal dream world within which this terrifyingly episode exists?  Only he knows why he did it.
AT the bottom we see the 2 harp parts (even though one is labeled "PIA" for Piano—-note that the composer continually crosses out these pre-printed labels out by hand).  The staves labeled "PERC" (percussion) show the "tree bells" and "B.DR" (bass drum) which together provide a magical, scintillating march-like tread to this otherworldly processional.  At the top—towards the right (at 08 seconds), we see our exotic, languid, haunting melodic group: flute (which often does that cool "sighing, drooping" fall-off of its last note in the phrase), electric violin, accordion, with the onafets and guitar (staves 5 and 8) added to the melody by means of a short-hand indication. (If you think this looks like deciphering hieroglyphics, YOU'RE RIGHT!—Frontiere dashed this stuff off, much of it in a scratchy, code-like musical short-hand that Farris recognized and understood).
This one-of-a-kind musical soundscape can be heard on the CD set:  CD 2, track 7, at 1:49.
It's also interesting to note that much of this score was recycled for "The MICE" but that, unlike the typical TV situation where pre-existing scores are simply tracked-in to new shows, Frontiere and the guys actually RE-RECORDED a lot of the "Nightmare" cues in a slightly expanded version; very odd that Daystar would have spent the money to re-record the "Nightmare" cues almost verbatim.
And thus we have an opportunity to peek into the secret workshop of Dominic Frontiere who, while racing the clock to meet the Daystar production schedule, managed to produce an unbelievable of mix of magic and mayhem in the process.
DOWNLOAD AN EXTREMELY RARE WACT EXCLUSIVE!
TOP SECRET OUTER LIMITS MP3
This is very likely the ONLY time that Dominic Frontiere's fully-orchestrated Opening/Closing theme music for the Outer Limits has been heard since it was recorded on August 23, 1963. The date, location and identity of this performance will, alas, remain a mystery for now. But I think you will agree that the orchestra played the music with tremendous vitality and conviction... which may have been due to the conductor's love for it. You will also note the maestro's lame Vic Perrin voice-over attempt as he conducted, the words of which rang familiar to at least some in the audience.
Posted by John Scoleri at 6:00 AM