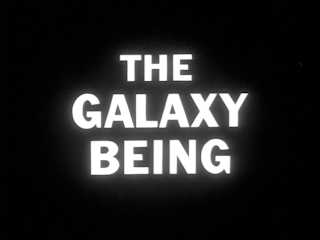 
Allan Maxwell (Robertson) and his brother Buddy (Philips) run radio station KXKVI. While Buddy is focused on the job, Allan is more interested in using the station's resources to experiment—like reaching out to other intelligent life forms via microwaves. Imagine his surprise when something materializes in three dimensions. Everything is proceeding nicely until an overzealous deejay cranks up the power on the station transmitter, releasing the interstellar guest (Douglas).

JS: I thought it was a nice touch how the sine wave pattern from the titles worked it's way into the pilot episode.

PE: I was wondering how the meeting with the network brass went after they screened "Please Stand By," which is essentially the same episode as "The Galaxy Being":


Brass: Well, we really love this show, but we'd like you to rework it and make some changes.
Stevens: Like?
Brass: Well, um, err... that title has to go!

Outside of a few very minor details, I can't imagine why they'd bother messing with this thing. In fact, when I became aware of the "Please Stand By"/"Galaxy Being" and watched "Please," I naturally assumed they'd be re-filming those dreadful special effects but, alas, they're just as bad as in the first incarnation. Chalk it all up, though, to the dawning of spfx in television and don't hold it against the show. I didn't.

JS: If this is any sign of things to come, the next 10 weeks should be a breeze. Interesting story, fine performances, a cool creature, effective music, nicely photographed—what more could we ask for? (Elizabeth Montgomery? Ursula Andress? Mary Tyler Moore? Nope, out of luck. -PE)

PE: Agreed. I liked the story as well. Cliff Robertson is really good in this. He's a character we've never seen before: a handsome science geek. He's a very good-natured dude. Allan smiles in a vacant way when his wife (Jacqueline Scott) pushes him to make a decision. I get that same look on my face when my girlfriend asks me a question while Adam-12 is on. 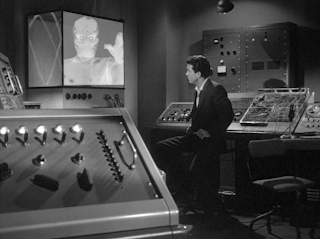 JS: The episode is cut from the same cloth as Robert Wise's seminal Day the Earth Stood Still (a bit too much in the climax. -PE). A benevolent alien met with fear and violence from the establishment... what makes it particularly interesting is that it's completely free of flying saucers. And unlike Wise's cautionary tale, not everyone makes it through the event unscathed (the deejay who let him loose may have deserved his fate, but the station caretaker was more of an unwilling victim of the Andromedan's radiation) (and don't forget those four DOAs in the car. -PE). And appealing to the monster kids in the audience, you can't help but feel a little bad for the Andromedan, who is unable to return to his home and therefore chooses to willingly "tune himself out."

PE: Well, actually, the reason the Andromedan can't get home is because he's never progressing while he's walking. In several scenes, he looks like he's on a treadmill. The background (blue screen) is not following his pace. And what's with that extra baggage up front? A bit of an Alien beer belly? Is the he really a she? My laugh-track moment comes when the alien steps out of his dimension into ours. Well, he doesn't really step out so much as shimmy out of a vent duct and fall face first on the floor. 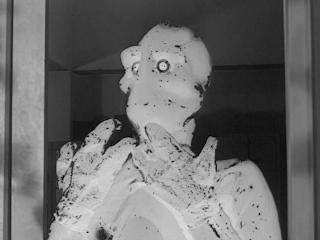 JS: I did have to laugh when he gives his speech, indicating he's going to leave in peace, the military and civilian onlookers all just turn and walk away. Um, he's still right there, folks! And no one even thought to try and take a picture? I thought the negative technique used to film the Andromedan gave him a very cool look. (if they had taken a picture of the big dude, what would the negative look like? -PE)

PE: You mentioned The Day The Earth Stood Still. In the end, "The Galaxy Being" merely recycles the message from that classic Keanu Reeves film: We better stop our aggression or someone will step in and stop it for us. Does his race keep a monitor on all civilizations or are we just so violent we’ve made a reputation all the way to the Andromeda system?! Do aliens film movies (in the Andromedan version of Hollywood) about us invading them?

JS: Keep in mind, Peter, that like Allan, 'Andy' was screwing around on the job. He wasn't supposed to be monitoring extraterrestrial traffic either, which is a big difference between this and the ol' Klaatu-Barada-Nikto.

PE: A few words about our first "Outer Limits Babe": Jacqueline Scott carved out a nice career as a character actress in films and especially on TV; parts on all the usual suspects: The Alfred Hitchcock Hour, The Twilight Zone ("The Parallel"), Have Gun, Will Travel, Gunsmoke, Bonanza, Ironside, Planet of the Apes, etc. On the big screen, she had roles in Bert I. Gordon's Empire of the Ants and Don Siegel's Telefon (with Charles Bronson). She'll be seen later in the Season 2 episode, "Counterweight."

JS: The original pilot was titled Please Stand By, as seen in the following opening and closing credits. For more on the variations between the versions, check out David J. Schow's write up below. 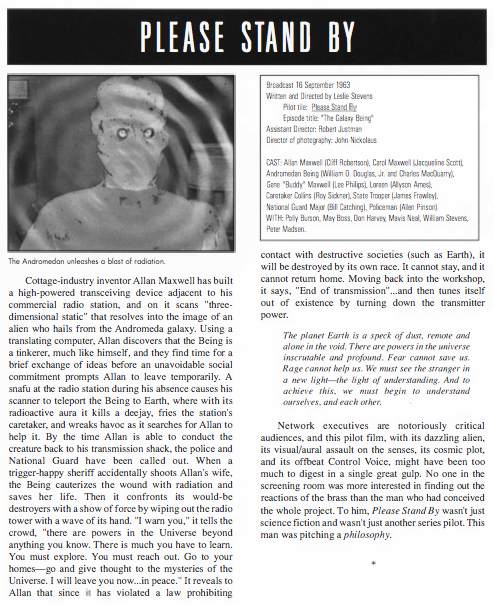 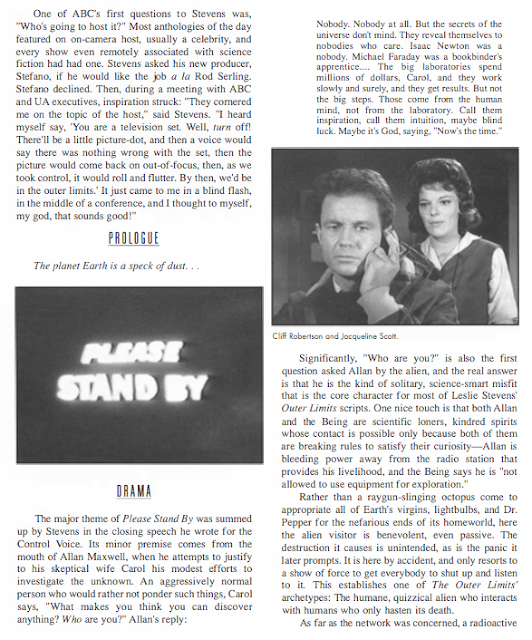 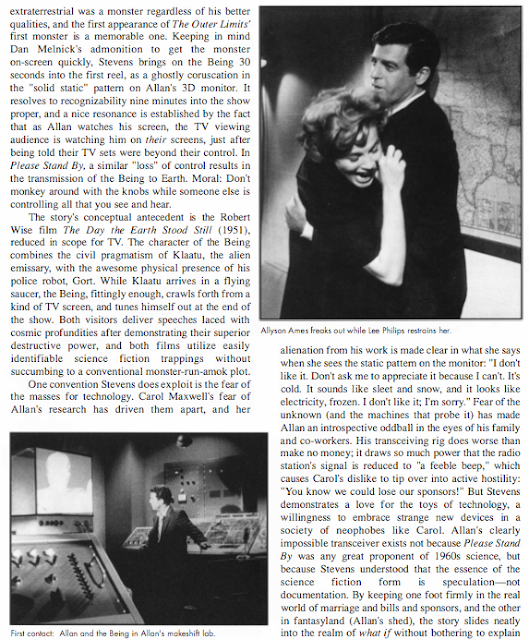 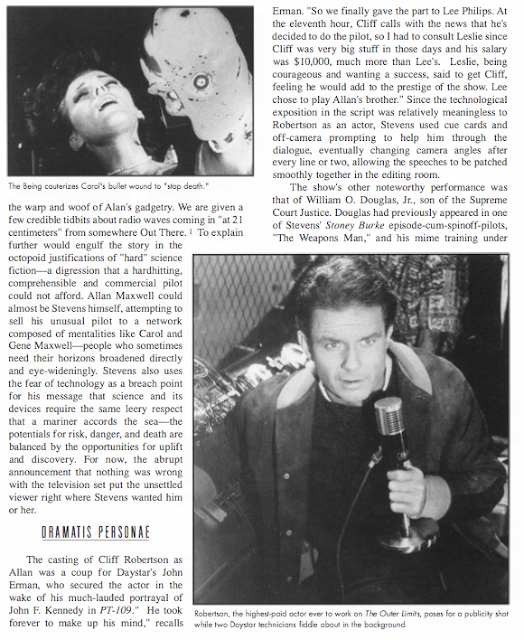 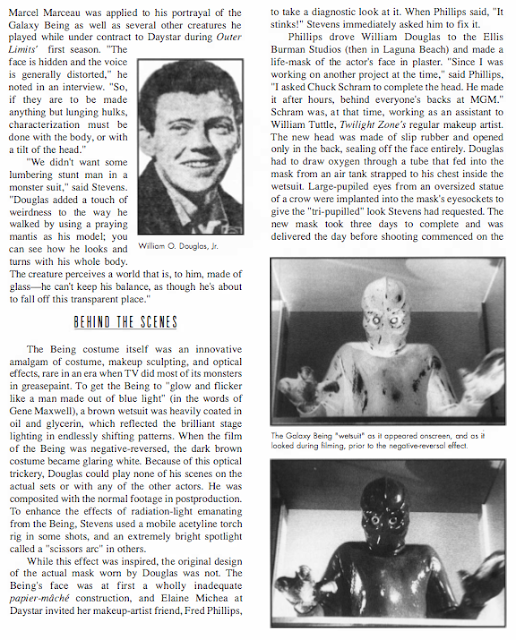 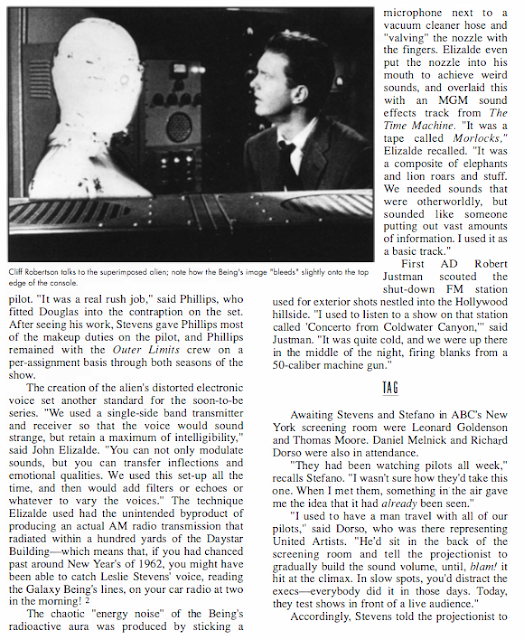