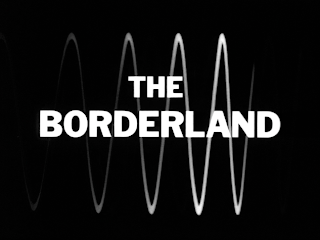 Production Order #02
Broadcast Order #12
Original Airdate: 12/16/63
Starring Peter Mark Richman, Philip Abbott, Nina Foch.
Written and directed by Leslie Stevens.
Professor Ian Fraser (Richman) has made a staggering discovery in an accident that occurs during an experiment. His hand is slipped into another dimension and comes back...backwards! He's sure that further experiments are in order but he needs to convince mega-rich Dwight Hartley (Barry Jones) that Ian and his merry band of scientists should be funded. Hartley's desperate to contact his dead son in the afterlife and will grasp any straw to achieve that goal. 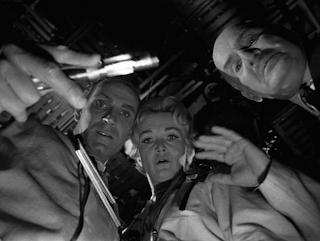 PE: Here's an odd one: an episode that begins like Thriller but ends like The Fly. A nice, atmospheric and (dare I use the word?) noirishly shot episode filled with scientific gobbledygook and bad science fiction flick trappings. The faux seance scene in particular is nicely handled and I did like the "what's in the bag?" shots of the cast looking down into the camera. On the downside, we have any of the shots to do with Fraser's duplicate hand, which look exactly like what they are: someone else off camera inserting their hand in the shot. 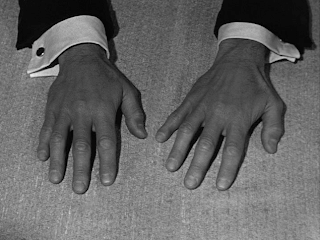 JS: While the idea of the flopped hand makes for one—count that one—creepy reveal, it doesn't hold up to much thought. At the point where he was in and out of the field, his arm is correct and reversed, you would think that the bones, tendons, veins, etc. wouldn't line up, right? And why did the mouse reverse but not his cage?


PE: You want examples of unneeded science talk? How's this for an exchange between Dwight Hartley and scientist Lincoln Russell (Abbott):


Hartley: I saw it. It turned around.
Russell: It did more than that. It reversed polarity and stabilized.
Hartley: Did they go into the other dimension?
Russell: They had to. They became negative matter.

Now, all that may make sense in scientific terms and in a theorem published in Reverse Polarity Weekly it might read smoothly but in a 60-minute sf tv show it could leave John Q. Public scratching its head and mumbling "huh"? 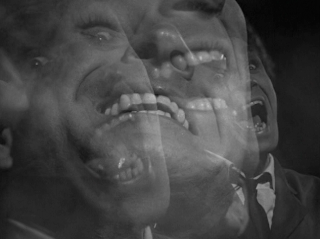 JS: You certainly can't complain about the production values. There were visual effects abound (not counting the stunt 'right hand' actor). Oddly enough, I thought one of the coolest images in the entire episode was probably the most simply achieved—the opening sequence with metal shavings being moved around magnetically. My other favorite image was when Ian was trapped in the field and we got the multiple exposure of his tortured self.
PE: POLARITY REVERSE!!! is my new catch phrase after watching Fraser man the controls of the get-me-to-another-dimension-whatchamajig. Every time he screamed the command to his wife and science lab partner, Eva (Nina Foch), he cracks an imaginary whip. In my script, Eva would patiently call out to her husband "Not until you say please."

JS: Richman certainly is committed to the role. I remember him fondly as the somewhat creepy Reverand father of Chrissy Snow (Suzanne Sommers) on Three's Company. Fans can order an autographed Outer Limits photo directly from the actor at his website.


PE: The fake seer, Mrs. Palmer (Gladys Cooper) and her dopey bodyguard/ P.R. man are a hoot wandering the halls of the power plant (this power plant is so important that anyone can wander in?). They reminded me of the Muppet hecklers, Statler and Waldorf, the old guys up in the theater box. 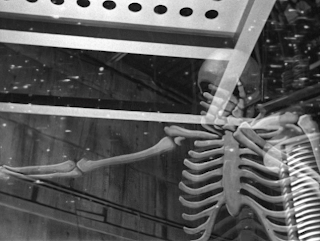 JS: Coming off of "The Galaxy Being", one can't help but be disappointed at the lack of a Bear in this episode. Of course, had one stepped out of the magnetic field, that probably would have felt a little too similar to the prior episode's hijinks. The closest we get is the "Man with Two Right Hands," and an all-too-brief fade into a particularly un-Thriller skeleton bit (which methinks means ol' man Hartley (Barry Jones) is joining his son, although perhaps not in the manner intended). (Look how shiny that skeleton is! the producers must have picked it up at Ed's Hobby Shop just that morning! -PE) (I wish! That's a paint-by-numbers skeleton if I've ever seen one... -JS)
PE: I would have hoped that all this scientific yaddayadda would lead up to something other than a Talking Heads video. Professor Fraser’s constant cry of “Eva Eva Eva!!” reminded me of the two sprites who stand on the Tokyo cliffs and call out for “Gamera, Gamera!!”

JS: Um, that would be Mothra, Peter.

PE: Do I get points for not knowing that?
JS RATING:

David J. Schow on "The Borderland": 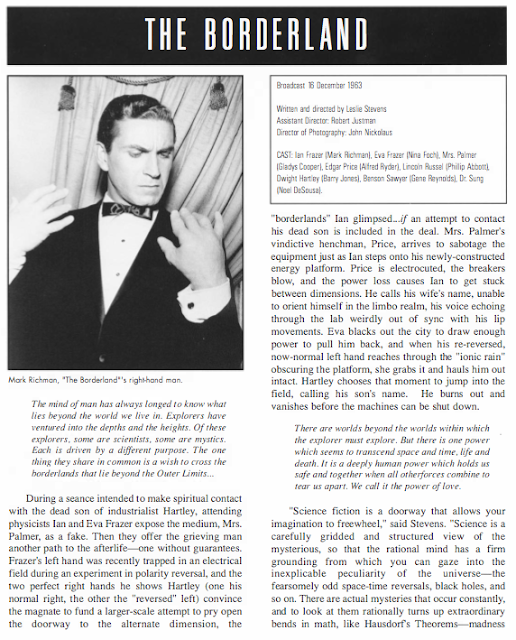 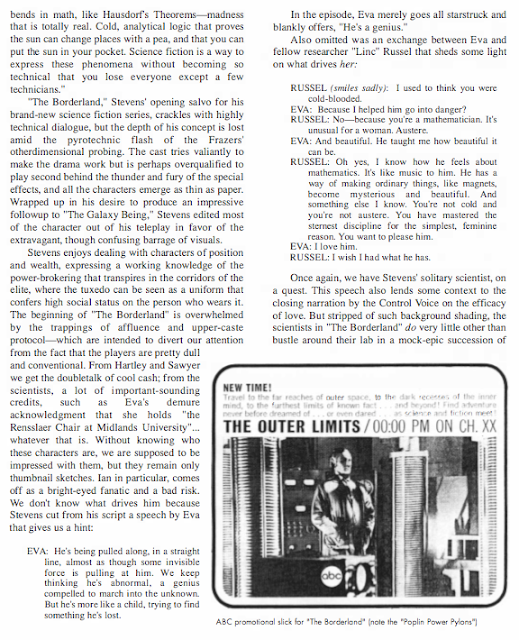 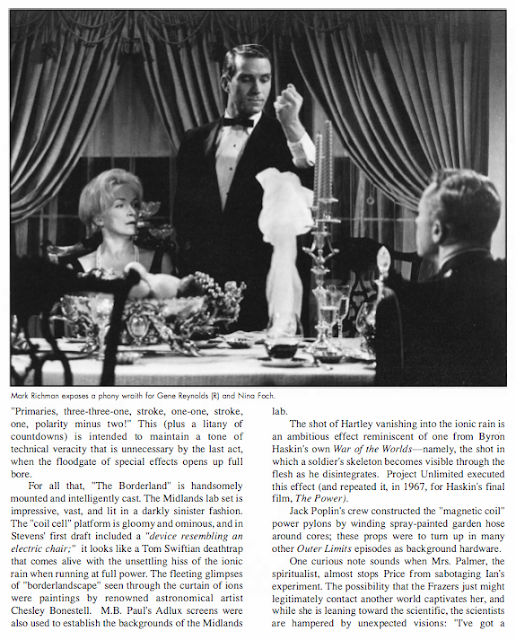 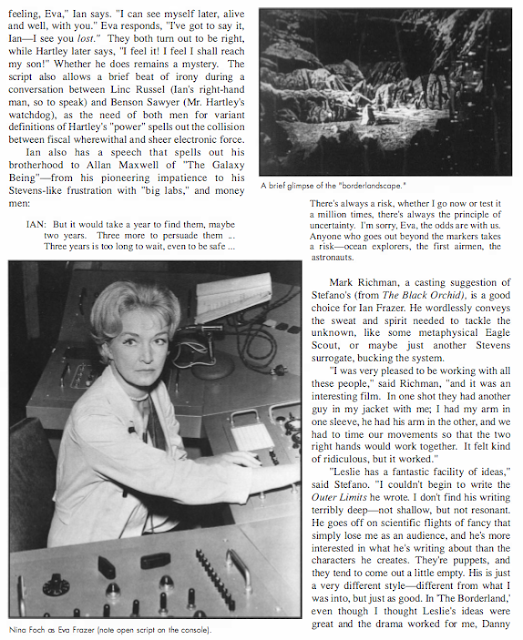 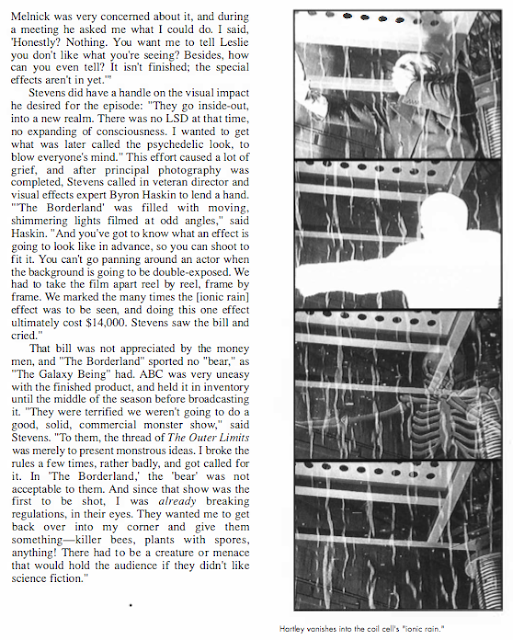 Posted by Peter Enfantino at 5:56 AM