Everyone who is now reading this is doing so via a device not too far removed in concept and technology from "O.B.I.T.", and I am sure that we can all cite examples of government's tendencies (for lack of a better term) to inject itself into the private lives of us citizens.  However, the purpose of this commentary is to examine...and marvel at the OL episode at hand.
We've seen the Outer Limits go from producing "big-screen"-style dramas ("Galaxy Being", "Tourist Attraction", "Borderland", etc), the excesses of which forced the down-sizing to a minimalist show ("Controlled Experiment"), leading now to an episode that indicates that the series has settled—in terms of scope, style, concept (and budget)—into the groove that would define The Outer Limits as it entered its "Golden Age".
"O.B.I.T." is, in many ways, as fine a piece of film making as the series ever produced, and exudes that dark, fascinating atmosphere that practically pulls the viewer into the O.B.I.T.-like TV screen (to quote Colonel Grover-"I can't not watch!").  A supreme example of the "Dynamic Duo" of Oswald and Hall operating as a smoothly integrated, super-charged unit, "O.B.I.T." turns up the intensity level through a most unexpected means—a compelling "chamber drama", in many ways tailor-made for the live stage.  Tightly contained in its settings,  without any high degree of visual pyrotechnics and a minimal "bear" presence, Oswald and Hall seem to thrive on the endless possibilities in a script that is, on the surface, extremely limited. And that's but one of the aspects of this episode that makes it so inventive, so satisfying.
And here we get the beginnings of that deliciously weird combination that these guys loved: gothic horror and sterile, technological settings. The show begins in a typical late '40's urban flea-bag hotel...so thoroughly associated with the noir style, flashing neon and all...with only a slight difference:  there's an outre, kooky control panel with a viewer screen, being operated by a nerdy guy wearing glasses that resemble the viewer screen....oh yeah,..and there's some kind of alien being that materializes on the screen, right there in the ol' Honeymoon Hotel. And that's just the (extremely brief) teaser!
And thus the OL creative team--certainly by normal TV standards of the day--having taken leave of their senses, proceed to spin out an unusually somber fantasy---one in which the emotional burden borne by the characters actually translates into visual terms; there are scenes in O.B.I.T where the creeping sense of dread seems about to suffocate the characters themselves, as the visual space surrounding them appears to close in threateningly.
And how cool is it that all of this takes place as a tightly controlled, high intensity court-room drama, where the minimalist, utilitarian government room, converted into an impromptu, mini "hall of justice", becomes the visual/dramatic playground for Oswald and Hall, as they transform this drab chamber into an endlessly fascinating,magical box, one that seems to embody the awe and mystery of the universe itself—especially when that strange machine is turned on. 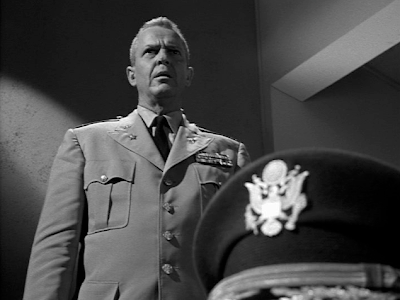 I'll just point out a few of the images that define this episode for me: the pudgy, sweaty face of Alan Baxter (General Grover), which seems to swallow up the screen the more unnerved he becomes (as does the face of Jeff Corey as we progressively zero-in on him); the almost expressionistic set-up for the court stenographer, and the way in which her hands visually mirror the hands of Lomax, seated at O.B.I.T; the swooping, circular camera move around Peter Breck as Mrs. Scott leaves the room after her testimony; the stifling atmosphere in the outer hallway, with the oppressive presence of Jeff Corey and the neurotic, soft-lensed appearance of Joanne Gilbert, a woman obviously at the end of her emotional rope (incidentally, not long ago I watched Ms. Gilbert in the goofy stylized Western/musical "Red Garters", where she belts out a couple of tunes and is romanced by a wily, dashing, dancing caballero played by Gene Barry(!) [It's true!].  Ms. Gilbert's fine performance in O.B.I.T., chain-smoking beneath that monolithic bouffant hair-do, offers us a portrait of a real, mid-60's woman....bad complexion and all..... one of the few in the series that seems absolutely true-to-life, an unembellished, dead-on portrayal of a woman caught in the emotional meat grinder of her existence. 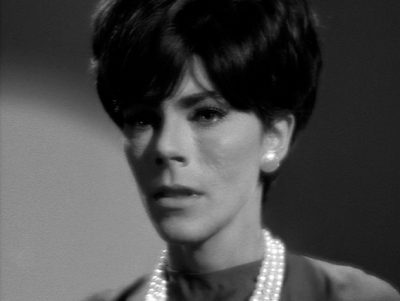 And then there's Mr. Jeff Corey, a most unique performer, here recently returned from cinematic exile due to the 1950's Hollywood Blacklist; there's irony somewhere in his casting here, but I'm not going to attempt it.  The point is...in my opinion...there are few performances (and roles themselves as scripted) in OL that really stand out as true "showcase" accomplishments but, in this case, Jeff Corey takes a relatively small part and transforms it into something beyond the bounds of what one would expect.
I have rewound many times to watch Corey perform the simplest of scenes...sitting at the O.B.I.T. control panel, demonstrating it to the court....and have been dazzled every time by the sheer level of the actor's craft displayed here: the little hesitations that betray his unease (and the animosity he feels for Senator Orville), the way he uses his (hairy) hands to accentuate his words, the cadence of his verbal delivery....all so beautifully paced, as if "orchestrated" to ultimately build to his climatic "reveal" speech at the end, a grand, glorious, theatrical soliloquy in which he seems to "toy" with us mere mortals, veering between a sort of casual small-talk ("and when we come here to live...") and a volcanic megalomania that bristles with hostility and contempt; he is one scary dude, so bookish and innocuous he seemed, but obviously wielding an unholy power, capable of both physical and emotional destruction (plus—he's one of the best damn' line-readers of any actor I can recall).
And Harry Townes, in a marvelously controlled and understated performance...a broken man who pulls himself out of his paranoiac retreat-into-the-void and back into the arena to make his stand...is most impressive.  Conrad Hall's work in the sanitarium scenes (perhaps recalling Joseph Cotten'sold-age scenes in "Citizen Kane"), is flawlessly designed to show us the shadowy, emotional "dead-zone" into which Townes has retreated. And, of course, one cannot ignore the contributions of TV tough-guy Peter Breck, he of the short fuse who can't wait to begin intimidating and insulting the staff of Cypress Hills with his supercilious, sarcastic manner. Interesting concept for the supposed "hero" of this episode, in which everyone we meet seems to be at least somewhat maladjusted. 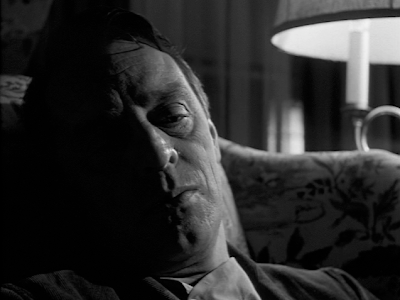 The single false note in this show for me is a very minor one;  during the old man's (Konstantin Shayne) testimony, somebody decided that sad music was needed as an underscore, so the OL guys went to the Stoney Burke cues and pulled out a gorgeous romantic tune known as "Soame's Theme" (in which Frontiere successfully captured something of a "Western" idiom), a cue which would make a much more impressive appearance as the love theme in OL's "The Guests". Its truncated appearance here feels contrived, especially for such a taut, bare-bones drama. Then again, it's barely audible, so what the hell am I complaining about?  (Oh, yeah...I wish that airplane hadn't taken so long to land in the opening of Act III....but it's at least as good a time-filler as puffed wheat in Dabney Coleman's face). 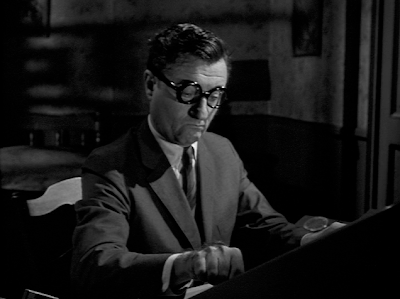 I can watch "O.B.I.T." again and again with total fascination;  I admit the Jason Wingreen "other" alien character was at first confusing ("oh...I get it.... those alien dudes all look pretty much alike in their human form....") , but I've sorted it out now.  Once again, a first-rate script from Meyer Dolinsky (he's batting 1000% so far!), supported by an absolutely first-rate dramatic and visual production.  One of OL's top-drawer episodes in every respect, hands down.
Larry Rapchak is conductor of the Northbrook Symphony (IL) and a composer, whose works have been commissioned and performed by the major orchestras of Chicago, Cincinnati, Louisville, Detroit and Helsinki.  His opera The Lifework of Juan Diaz (yes, the same story adapted by Ray Bradbury for Hitchcock's TV show in 1964), written in collaboration with the author, was premiered by Chamber Opera Chicago and released on Albany records.  The opera is, according to the composer, the only one in the repertoire featuring a mummy as the lead baritone. Rapchak has an intense interest in certain popular things of the past, Thriller and Outer Limits among them.


An unrelated P.S. for Larry Blamire (from the management): 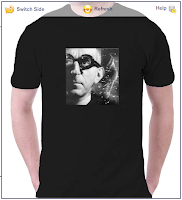 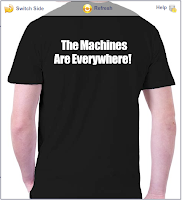