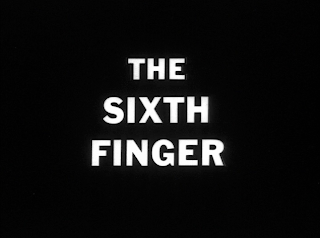 Professor Mathers (Mulhare) has developed a machine that allows him to advance man's evolutionary state by way of a two-direction lever. He finds a willing subject in a local miner, Gwyllm (McCallum), and quickly finds that the man of the future is not quite the benevolent soul he had anticipated. 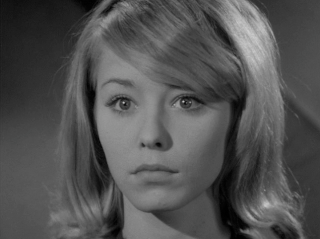 JS: What we have here is a classic beauty and the beast tale; and what a beauty we've got in the lovely 18 year-old Jill Haworth as the uneducated peasant girl Cathy. Sadly, as  one of our readers noted in the comments to "Specimen: Unknown" last week, Haworth died on January 3rd. Her other genre appearances included playing opposite Donald Pleasence in The Mutations (1974) and Roddy McDowell in It (1966). Yowza!

PE: I see you've discovered the IMDB. (I'll have you know I already own both of those. But yes, thanks to IMDB my copy of Tower of Evil is on the way. -JS) 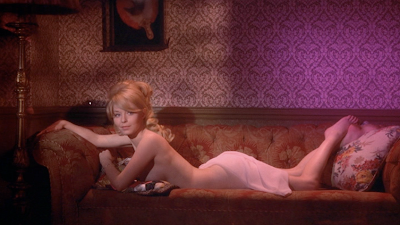 JS: I love how the gothic mansion exterior gives way to the classic OL laboratory set. Of course, all bets are off as soon as Mathers starts gnawing on the entire loaf of bread Cathy delivers—without first paying for it. Poor girl, all she wants out of life is correct payment for bread and to be halfway smart, and it turns out she doesn't have the right blood to meet her lofty goals.

PE: Hmmm. I must have missed the above scene of the fair maiden resting after a weary day of bread-peddling.

JS: Gwyllm's transformation is nothing short of miraculous. The artistic talent on display is unparalleled, as these two screenshots can attest. It's almost as if he morphs into a young Klaus Kinski. 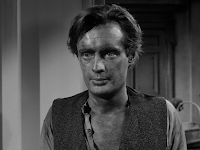 JS: Okay, the multi-stage make-up is very effective, too. And McCallum really sells it. I always liked him in The Great Escape, although I have never seen him in his most famous role as Nikita Kruschev, or Yuri Gagarin, or whoever it was that he played in The Man From U.N.C.L.E. One of my favorite lines is when Cathy asks, "If you could teach that monkey, couldn't you teach Gwyllm as well?" Ah, young love. 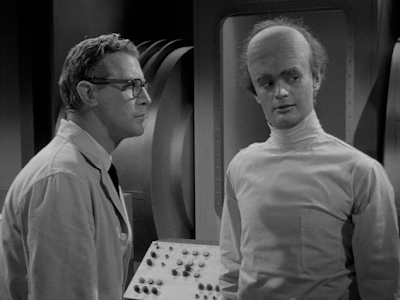 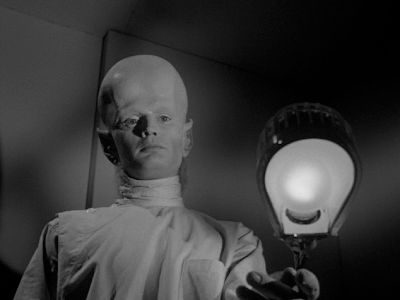 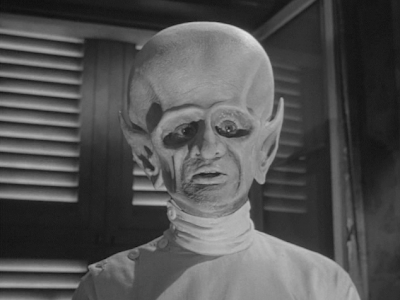 PE: McCallum's performance almost accelerates with each new head piece. As the dirty miner, I thought he was mildly interesting. As the super-intellect, he's mesmerizing. It's going to be real tough deciding who gets Best Actor Award come trophy time. Will it be Robert Culp, Martin Landau, David McCallum or Astronaut Steve? Stay tuned! And Edward Mulhare is no slouch here either, giving a wonderfully understated performance as the scientist who realizes too late that man was not meant to meddle ... and all that other stuff. My generation remembers Mulhare as spirit half of The Ghost and Mrs. Muir while John's would probably recognize the actor as Devon Miles in Knight Rider (that is, if John's generation ever took its collective eyes off its video games). Clearly second banana (or third, if you count the monkey), Mulhare still shines when his character's screen time gives way to Gwyllym's and the scientist is relegated to the background.

JS: One particularly sad thing to look forward to for men in the future is the receding hairlines. All the other enhanced abilities and they couldn't get a handle on that. While I kept waiting for the 'Sixth Finger' to come into play, it never quite did. But I do appreciate that it makes for a better title than "The More Heightened Forehead."

PE: I may get argument here but this final-makeup on McCallum represents the iconic Outer Limits image. Some will say the Zanti, but I'd argue it's this creature.

JS: It's a fair assessment. Zanti is clearly a (if not the) fan-favorite bear, but I think the marketing folks took a liking to Gwyllm early on (of course in today's world, they would have forced him to change his name to something more marketable).

PE: Again, what's astounding about McCallum's screen time in that fish-tank head is that most actors would feel confined by the extra greasepaint and paper mache. McCallum seems to absorb it almost organically and use it to great effect. 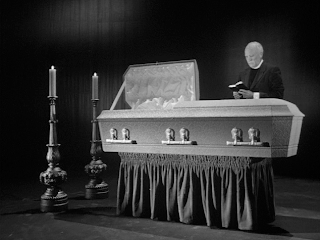 JS: If you followed A Thriller A Day, you know I give bonus points for funeral scenes, even when shot in an abandoned warehouse. And did anyone else find it odd that Mathers kept a loaded gun in his top dresser drawer... in the foyer?

PE: While you can certainly mock several of the past effects and creature make-ups (and believe me, we'll keep it up), you really can't find fault in this episode. Well, I guess you could ask why the Professor needs  "Backward" and "Forward"  labeling on his time transference gizmo. Is it for guests?  Did he craft the labels himself or farm the work out to the little village he lives in? And who built the machine itself? The prof or one of the time machine architects down the lane? 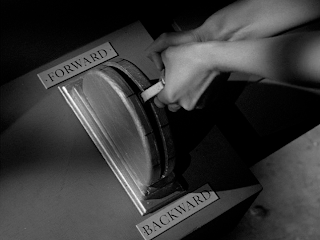 JS: Sure, if I were building an evolution lever, I think I might make it with a little finer measurement than FORWARD/BACKWARD. It seems reasonable it might need as much sophistication as say, driving a car. I'm willing to accept that 10,000 years of evolution per minute, but why go to all that trouble and then just wing it.

PE: Why weren't any of the three thousand dials and knobs labeled? And how about that stock warped sound that emanates from the chamber. I believe they tweaked that years later for the Ironside theme.

JS: When Gwyllm asks Cathy to fast-forward him to the future, wouldn't he hear bells and whistles going off in her head as soon as he reminds her not to send him backwards by mistake, because that would be in the past? Perhaps this is where Cathy's not even being halfway-smart pays off. 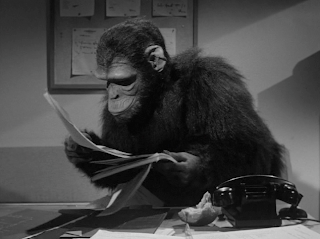 JS: Ladies and gentlemen—the unsung hero of the episode—Darwin the monkey! An evolutionary leap from the standard ape suit of Universal pictures, Republic serials and poverty row chillers; anticipating the more sophisticated apes of 2001 and Planet of the Apes. To be perfectly honest, I was disappointed that we never found out what the heck Darwin was up to when reading papers or working on machines. The last we see of him is when he runs upstairs after being dissed by Gwyllm. I welcome your speculation on the fate of Darwin. I'd personally like to think he hooked up with Moloch and Styx from Thriller's "Well of Doom"...

PE: He went on to star in the Mad Max series and direct Passion of the Christ. He's had quite a career.
JS RATING: 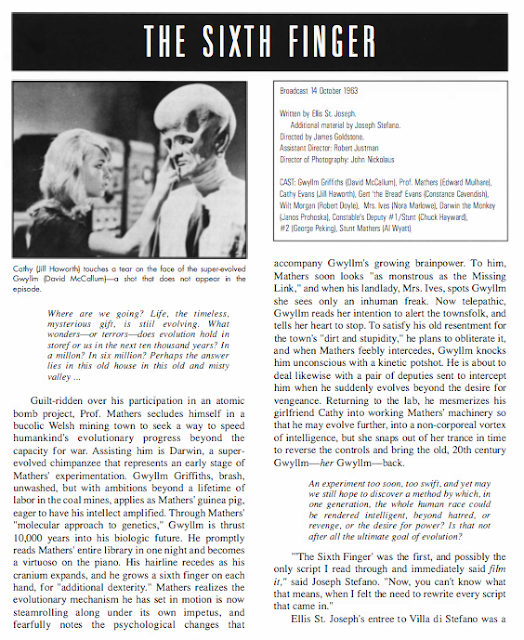 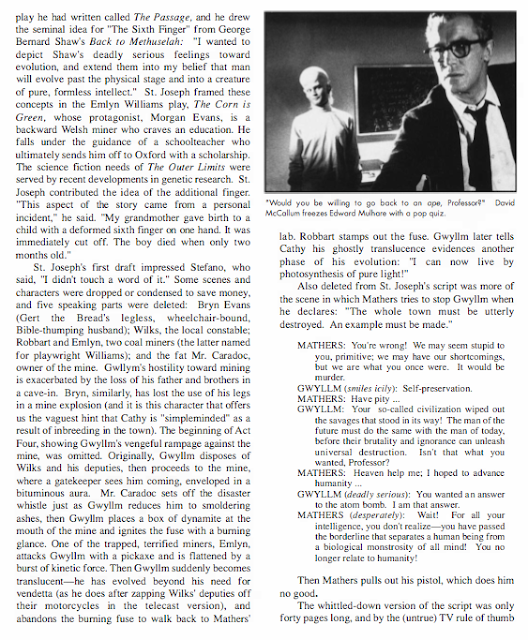 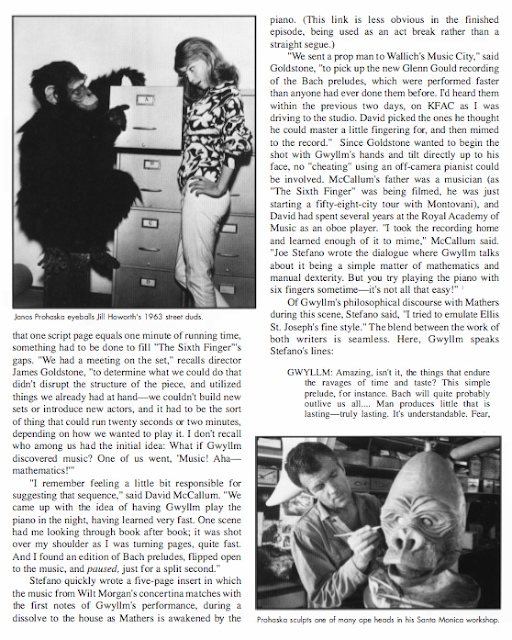 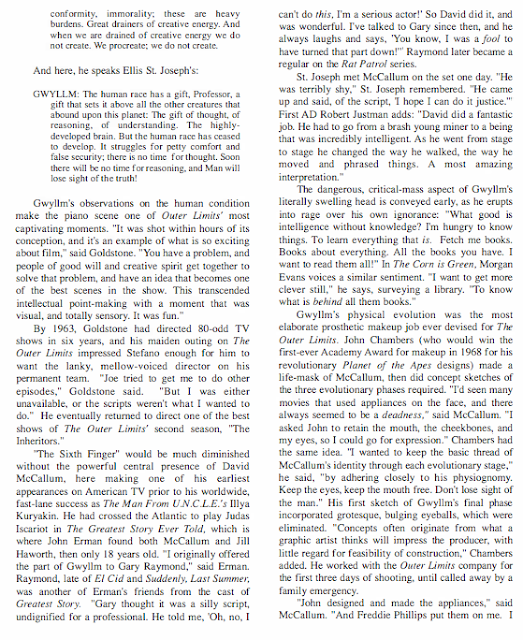 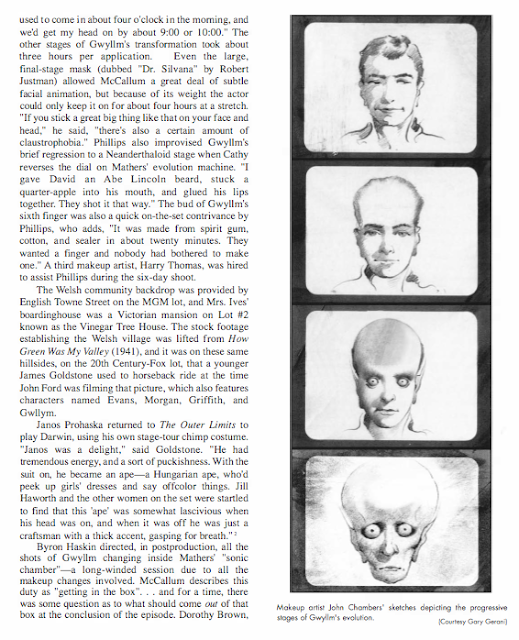 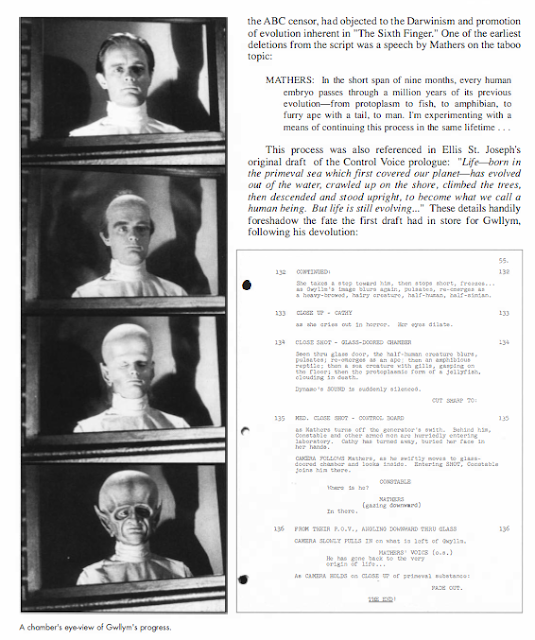 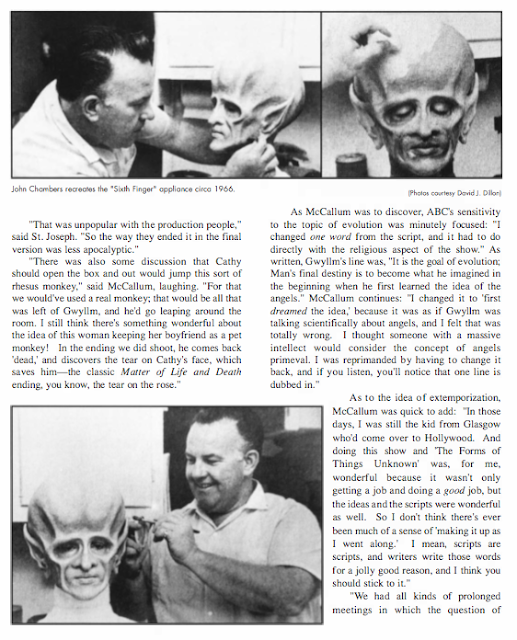 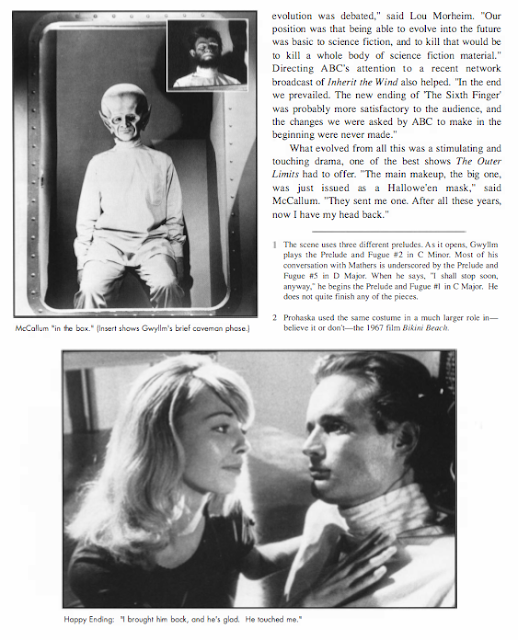