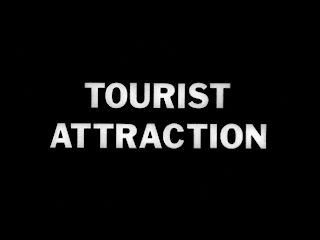 John Dexter (Meeker) comes to Latin America for a fishing expedition with his beautiful assistant Lynn Arthur (Blair) and his resident marine biologist, Tom Evans (Jerry Douglas). While testing out new sonar equipment, the crew stumble on a sea monster. Capturing the creature, they prepare to export it back to America, raising the ire of the tyrannical General Juan Mercurio (Silva). Mayhem ensues. 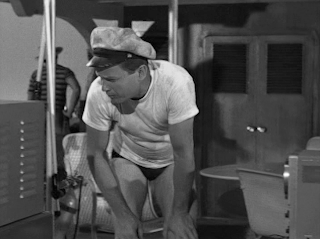 PE: I could have easily gone another 49 years without seeing Ralph Meeker in a speedo.

JS: Perhaps he thought they were only shooting him from the waist up. Honestly though, do you really think it would have been any better if it were Richard Carlson? He is playing the Carlson role, right? (I thought he was playing Carl Denham but you could be right. -PE) 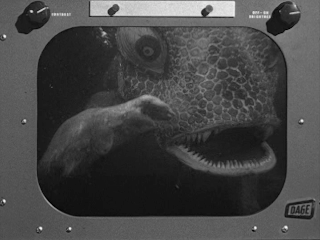 PE: Obviously there’s something wrong with Dexter’s eyesight. Despite having a clear picture of the monster swimming up to the camera and waving at him, he tells Tom Evans (Jerry Douglas) he “didn’t get too good a look at it but it has hands and feet.” And really big teeth. He must have missed that.

JS: Yeah, but for what it's worth, that could have just as easily been handled offscreen. At least this way, we got a good look at the monster without having to sit through two reels of exposition first.
PE: Sometime around 1963, Dean Riesner (who’d been writing mostly TV westerns) happened upon a stack of old monster movie scripts and Marvel monster comics at a garage sale in Hollywood. That’s my only explanation. Of course, a few years later Riesner more than redeemed himself by becoming Clint Eastwood’s favorite screenwriter (Coogan’s Bluff, Play Misty For Me, Dirty Harry, and The Enforcer) as well as writing the classic Walter Matthau film, Charley Varrick. Perhaps most famously, for genre fans, he created the Vampira persona for then-wife Maila Nurmi. 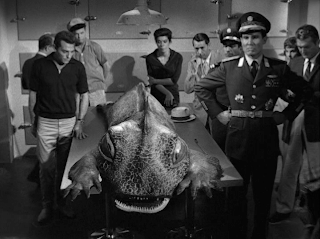 JS: You know what, at one point I honestly forgot I was watching The Outer Limits and thought I was watching a low budget 50's monster movie. And what a nice surprise it was to see master thespian Henry Silva at work again. I love when he demands his photo op with the seemingly dead creature.


PE: You just know that when the Professor (Jay Novello) shows Paco the thermostat that keeps the monster frozen and says “Paco, ah no touch!” there’s gonna be trouble. Obviously, Paco and his checkers-playing compadre were vacationing in Denmark a couple years previously when Reptilicus similarly thawed out. These two incidents can’t be coincidence. And, can someone tell me where all that water is coming from when the beastie is thawing?

JS: Yeah, why is it the most important security jobs always land on the shoulders of the lowest paid employee?


PE: My laugher for the show comes when the creature torches his way out of the freezer with his “concussion force.” You can clearly see the outline the torch will follow. This weapon (as Tom calls it, “a super sonic impulse concentrated into a beam”) can also knock the legs off tables and make old men grab their faces.

JS: He was clearly using a jigsaw. He just set it aside before popping out of the freezer. 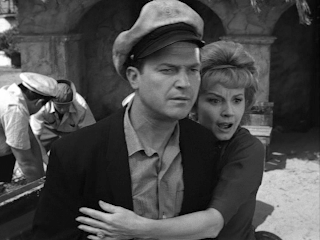 PE: Most critics have stated that The Outer Limits is a science fiction show, but based on “Tourist Attraction” and “The Human Factor,” I think it goes much deeper. It’s about women who just want a little love out of their stone cold men. Eventually, they find that love.

JS: And therein lies the fiction. I have to say the whole love story bit was the one element that didn't work for me. Okay, that and the title. Okay, that, the title, and the Control Voice interludes. But despite all that, this is still my favorite episode thus far. It was nice (oscilloscope notwithstanding) to have an episode free of most of the hard science gadgets and machinery. Just good old, South American monsters, and plenty of 'em! Taken out of context, I do think the monster suit looks rather silly. (Taken out of context??!! It looks freakin' silly in context! -PE) But within the episode, I was willing to buy it hook-line-and sinker. Sure, it's no Creature From the Black Lagoon, but most of Roger Corman's monsters have got nothing on this guy. 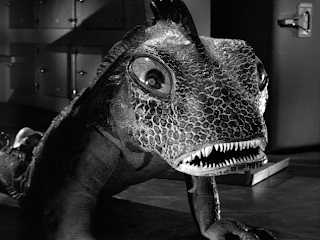 PE: The suit for the fish monster is really not that bad. What’s unfortunate is when several of the suits are needed at the same time. Obviously, there wasn’t the budget for more than a couple of these “elaborate” suits and a full-scale dam collapse in the same episode. Something had to give. Jim Danforth and crew give it their best. There’s actually a shot of one of the monsters at the bottom of the dam that appears to be nothing more than a shell without arms and a big, blood-shot (!) eyeball.


JS: Did you ever consider that maybe it was just molting?

PE: Tom Evans listens to the sound of the army of sea monsters at the dam and declares, “I think they’re going to try to rescue him!” while the Professor continuously adjusts the same two knobs. 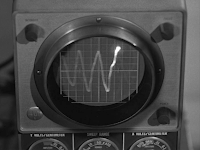 JS: Clearly he was trying to tune in the Outer Limits sine wave. Let's talk about the Dam breaking for a second. Fish-boy's monster pals come to the rescue, humans cut him loose; episode's over, right? Wrong. Apparently someone realized that they needed to tie off the loose ends of the General's story. So insert narration, bust the dam open, and clean up the mess it made. At least Henry Silva got a few more seconds of screen time for lying face down in the mud. Can I also add how nice it is to see a process shot framed with both passengers in a car fitting on the screen without the passenger having to sit in the driver's lap, Thriller-style? (You think it might have been handled differently if Tom Evans had been in the car instead :> -PE) 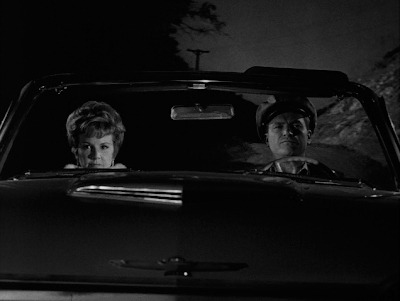 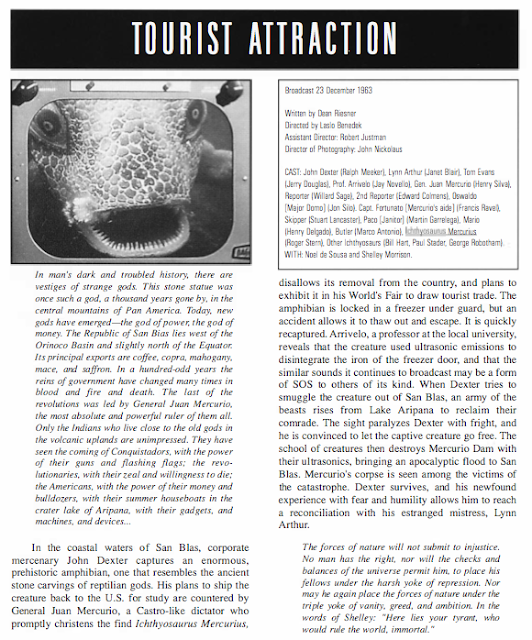 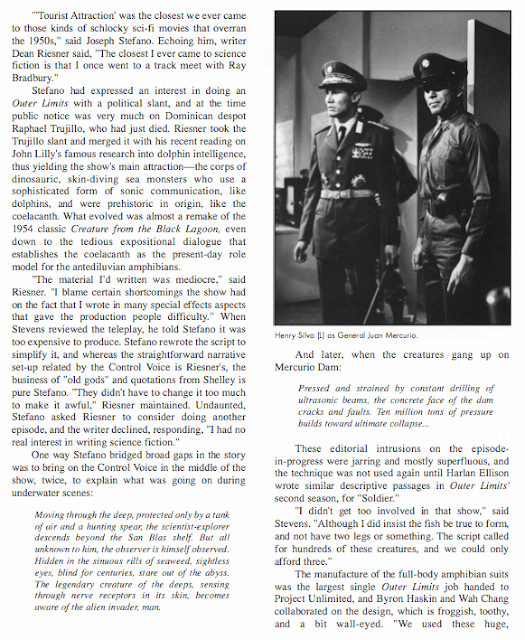 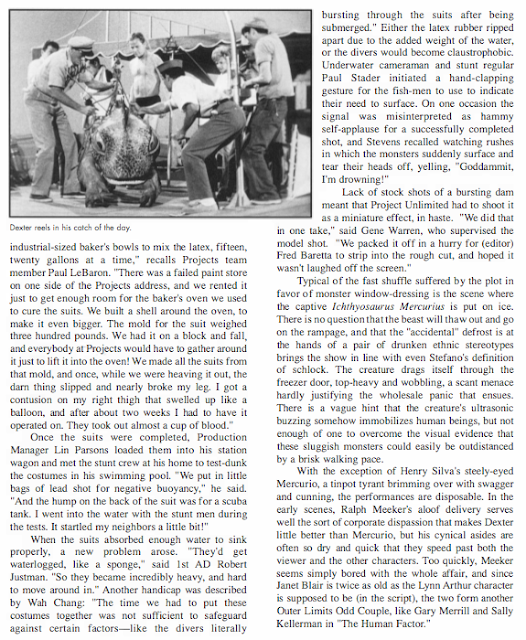 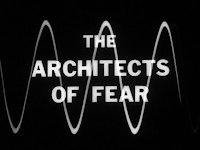