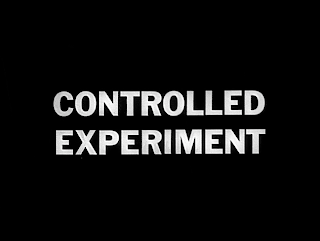 Two martians (Morse and O'Connor), undercover to observe Earthling patterns, are instructed to study a murder that is about to occur in a hotel lobby. They get to the scene of the crime in time but then become so obsessed with the affair they "rewind" and "replay" the moment of the murder... over and over and over. 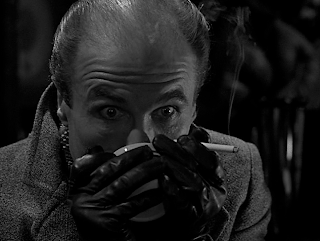 PE: A weird and wild episode. I enjoyed the whimsical nature and the two excellent character actors chewing scenery (O'Connor even sports a British accent at times) up until we get to the re-enactment of the murder. It then becomes transparent what's going on: a quickie on a shoestring. The rewind goes on ad nauseum. But 'til then it's a delight: Morse's almost orgasmic first puff of a cigarette and cup of joe; O'Connor's transformation from a very gentle British Martian to a gruff New Yawk pawn shop owner; and more of those goofy control panels that have twenty buttons but only two that do anything (I'm sure the script even described them as such to the Project Unlimited crew). All that's missing is a now-infamous "Whomp-Schlop-Boom!" courtesy of Thriller composer Morton Stevens. God, I miss that.

JS: Hang on just a second, I think we've got the credits all wrong on this one. Leslie Stevens was all about hard science and the extrapolation of scientific possibility, right? There's no bear, there's no sine wave... I mean, he's not going to write about two Martians hanging out partaking in odd human customs such as drinking coffee and smoking cigarettes? Who are they trying to kid—this is a Rod Serling intro shy of being a Twilight Zone episode!

PE: All I have to say is "Whomp-Schlop-Boom!"
JS: I guess it could have been worse. They could have played the Benny Hill theme music when everything switched into fast-forward. On to the good. Two points to Grace Lee Whitney for being our first indisputable Outer Limits Babe of the Week. 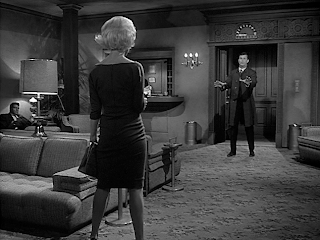 PE: The only plus to the episode's unending replay of the murder is that Grace Lee Whitney had one hell of an ass! Call me a pig... (pause)...but that stance of hers made me hit the rewind over and over. Oh, no, I just thought I was hitting the rewind over and over.
JS: Did you notice that right out of the Thriller playbook, we have a pawn shop with a cage customers can walk right around?

PE: My God, son, we have been married too long! I thought to myself, "Self, this is where all the cool sets from Thriller went to die!" Do you think somewhere in the run of Outer Limits we'll get to see the cut-off jeans that Larry Blyden wore in "Choose a Victim"? Perhaps on Robert Culp? 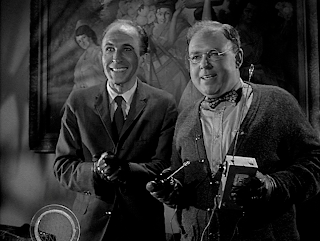 JS: I will admit a certain fondness of watching two TV greats banter back and forth (I can picture Barry Morse as you and Carrol O'Connor as me in the TV movie about this blog).

PE: Funny, I picture it more like Ricardo Montalban as me and Herve Villechaize as you, but it's all in how you look at it, I guess.

JS: Overall this one was downright silly. Reasonably entertaining, but not at all what I've come to expect from an episode of The Outer Limits. The pseudo-science talk, let alone the pseudo-science, is laughable. Content aside, I was struck with how nice the episodes have looked so far, particularly in comparison to the wildly varying quality of Thriller eps.
JS RATING: 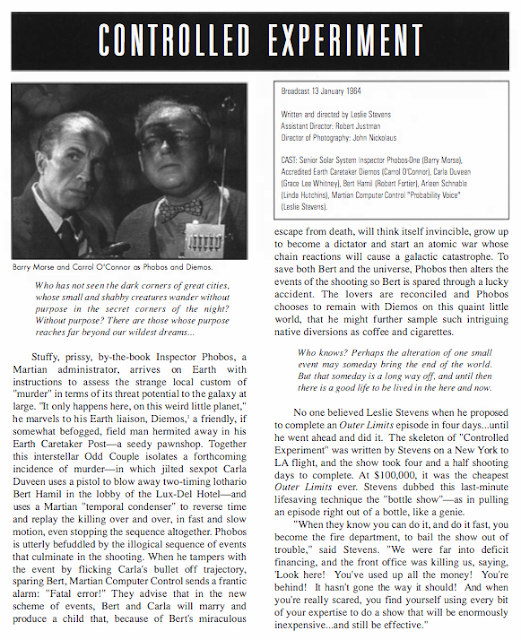 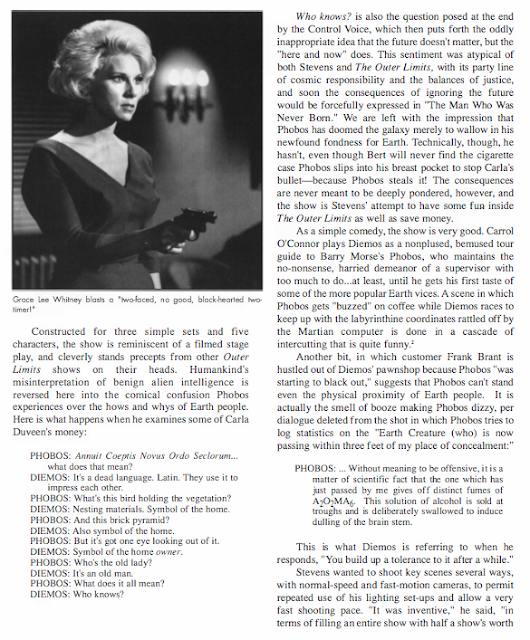 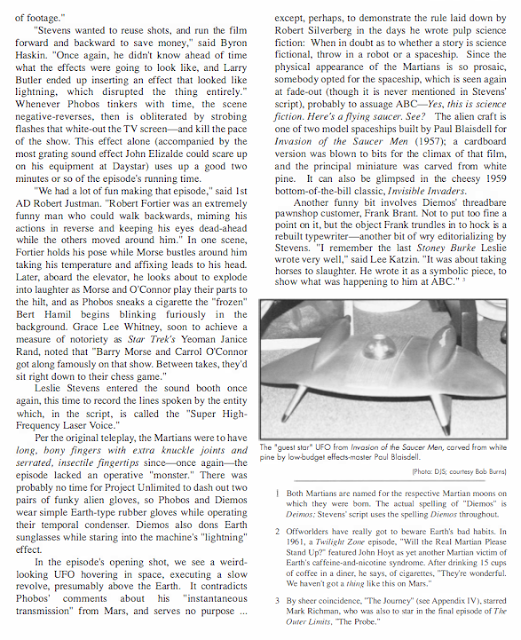 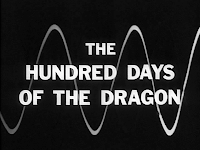