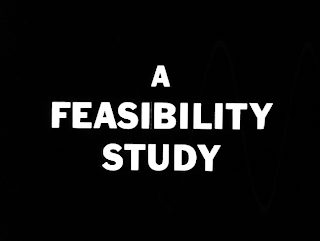 A small neighborhood is literally carved out of the Earth and its inhabitants whisked away into space to be studied by the rock-like Luminoids. Their intention is to determine if they can use the earthlings as slave labor. They will quickly find out if they've underestimated the human spirit.
JS: It all begins with an interstellar badminton match between  Earth and planet Luminos... 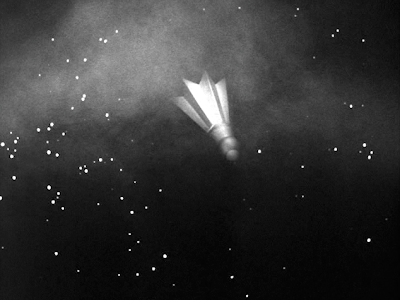 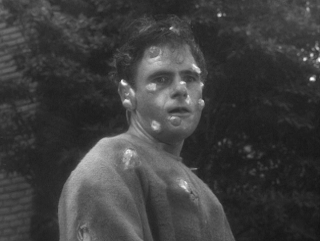 So they budget for one too many Ichthyosaur and this is what we've come to? Prop shopping at the sporting goods store? That small element aside, what begins as a promising, terrifying episode dips fairly low in the middle (in part due to the less than stellar Luminoid transition make-up and a dissertation on marriage the likes of which we haven't seen since Thriller's "Child's Play"), only to partially redeem itself in the end.
PE: Until you pointed it out to me, I didn't realize it was a shuttlecock. I was thinking "What a fabulous, unique design for an orbital craft," and you have to ruin it with your negativity. No wonder our readers like me more than you. (You honestly think our readers like you more than I like you? -JS) 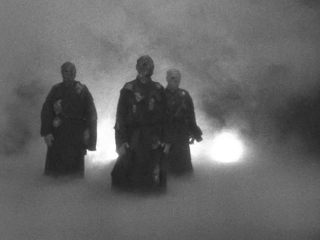 JS: When we first get a glimpse of the Luminoids, they are truly frightening, emerging from the fog. Unfortunately those in the early stages of rock formation do not fare as well. The prosthetic appliances on the teen Luminoid and infected humans are not nearly as convincing as the full body costumes.

PE: Indeed! I thought that initial scene of the three Luminoids appearing was ghoulish fun until I heard that garish, blaring "Dun-dun-dun" right out of a bad Universal-International flick from the 50s. Ordinarily, I fall in with the Frontiere clubhouse, but not in this particular scene. Still, I guess it's better than "Slip-Bam-Shlomp." 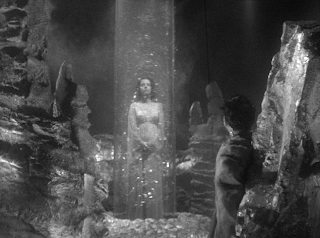 JS: There are a couple of groaners in the husband/wife discussions, and I could have done without the girl in the test tube. But for me, when Simon finds himself before the rock lord tribunal, and the head honcho starts preaching to him, it really starts to drag. To me, the voice didn't work with the look of the Luminoids. At the very least, I would have preferred they not even try to articulate the mouth, as in the brightly lit shots the masks just don't work. Perhaps they could have spoken telepathically, Beneath the Planet of the Apes mutant-style.

PE: Well, there you go again. Are you going to tell me you couldn't find the depth and meaning in the line: "It's a dead end world with walled-in curtains that don't even get dirty"? Or how about when Simon (Wanamaker) is begging Andrea (Love) to stay. He nearly gets down to his knees: "I just don't want you wandering around the world worrying about everybody else. Not when I need you here. Always at home." That's true love. My personal favorite scene here is when the head Luminoid (I've always wanted to say that) basically tells the rules of the game to Wanamaker: "Well, we're gonna see if this thing works. If you happen to catch Luminitis, we're not gonna kidnap the other three billion of you." 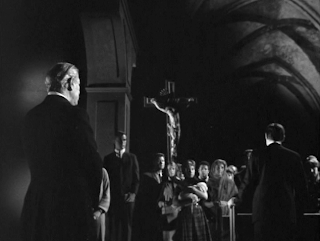 JS: They must have cut the line that followed: "Oops—I probably shouldn't have said that..." Once we're past that, the sequence in the church is particularly effective. It's incredibly dark—a striking contrast to the brightly lit church scenes you normally see on TV and in movies. It leads to a very powerful conclusion in which the humans band together, essentially sacrificing themselves to save the human race.

PE: Talk about two shows in one. This climax almost saves the show for me. Like the graphic killing of the presidential candidate in "One Hundred Days of the Dragon," you just didn't see a lot of downbeat TV in the early 1960s except, it seems, right here.

JS: The quality of this episode leaves a lot to be desired. I equated the problems to a poor transfer, but quickly determined the interior shots were acceptable, while the majority of the outdoor shots, particularly in the fog, appear to have been shot through cheese-cloth.

PE: The interior "marriage problem" shots come off like Philco Television Playhouse, so unlike the rest of the show (in fact, unlike any of the other episodes thus far). The crappy dialogue didn't help.
JS RATING: 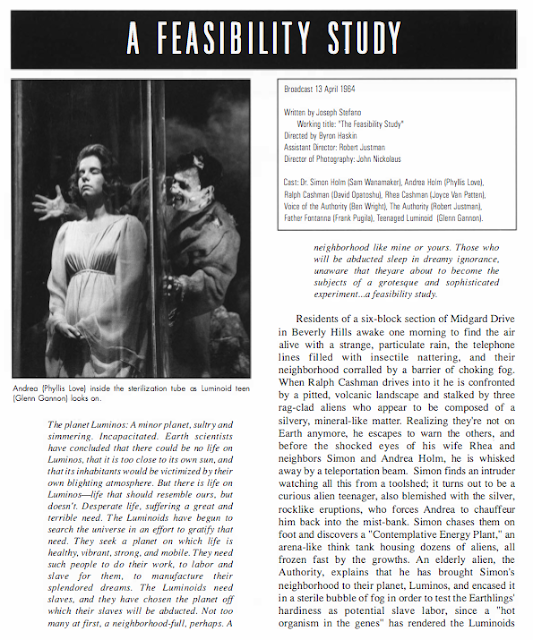 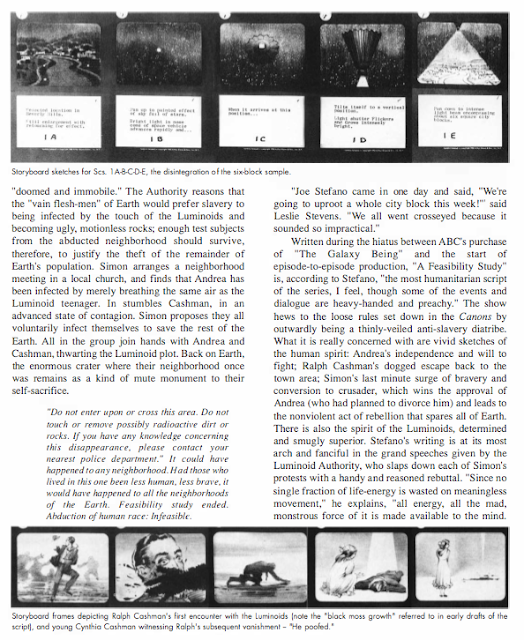 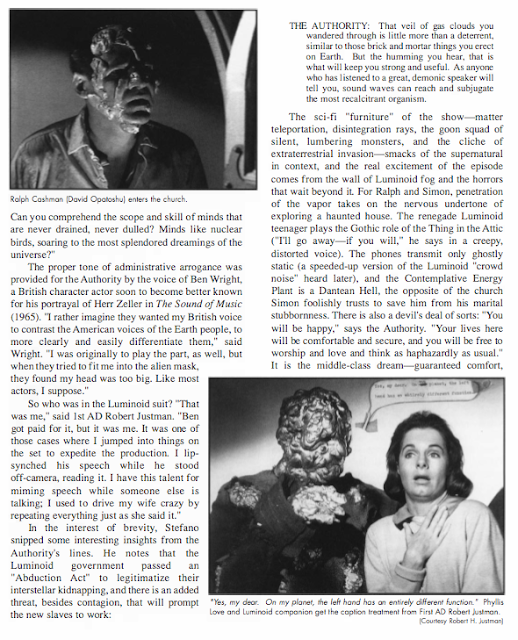 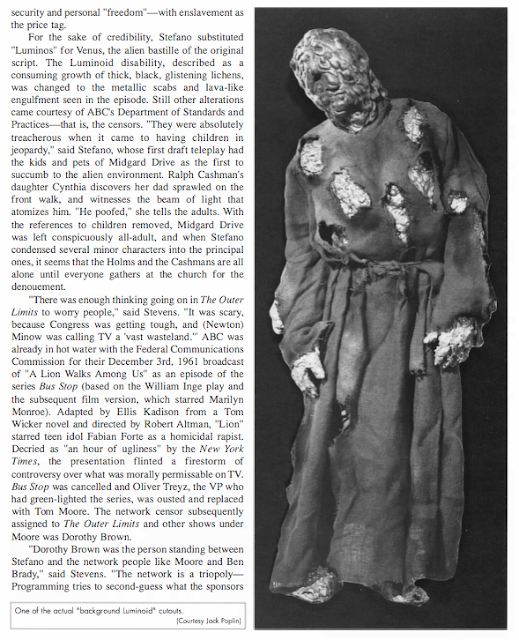 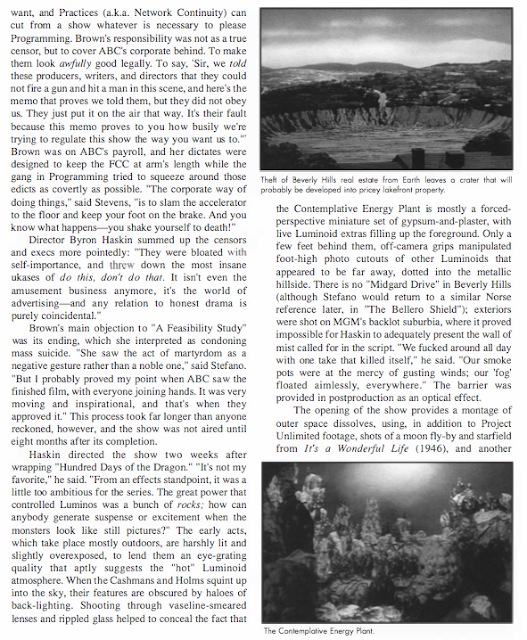 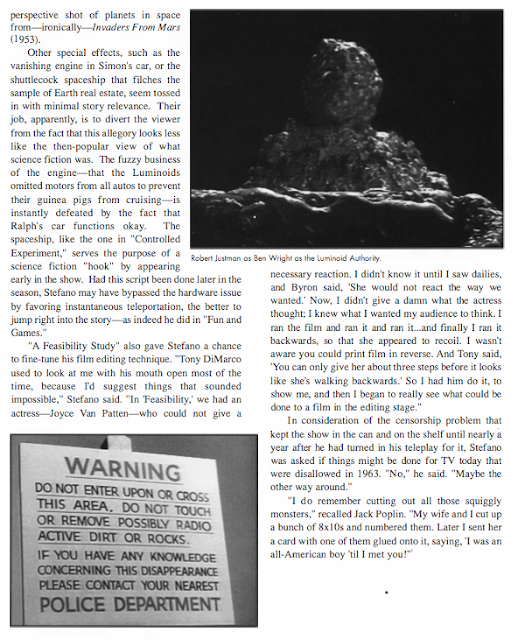