A commentary with STEVE MITCHELL


Hi Everybody! I’m Steve Mitchell DVD Special Features producer for…wait a second…sorry, old habits die hard. This is not a DVD commentary session. Actually, I wish it was and I was producing the special features for an expanded OUTER LIMITS for DVD and Blu Ray. I did so for THRILLER and after assembling my army of expert historians, filmmakers, and cast and crew it seemed like OUTER LIMITS was the next TV project in need of an exhaustive collection of commentaries and featurettes. Sadly, at least for now, this is not the case. Now might be a good time for a groundswell movement of emails to FOX home video demanding for a Deluxe Special Edition of the series.
Thanks to our hosts, Peter and John, we may have the next best thing with: WE ARE CONTROLLING TRANSMISSION.
When I was asked if I wanted to be a contibutor, I immediately blurted out ZANTI MISFITS! ZANTI MISFITS! This is, hands down, my fave of the series, which I will be reminiscing about in a later column/spotlight. My mission of the moment is to talk about SPECIMEN: UNKNOWN.
Now I have struggled with how I was going to approach this episode which according to DAVID J. SCHOW’S exhaustive and fact packed masterpiece: THE OUTER LIMITS COMPANION, was the highest rated episode of the series.  For the facts, and critical analysis about the series, DAVID and my friend and sometimes producing partner, GARY GERANI, can runs laps around me, backwards while taking a nap.
In a previous life I was a film journalist, and by nature: nosy and a snoop.  Before I was paid peanuts, in some cases literally, for my work, I was a TV fan in general, and was always interested in chatting about last night’s shows. Also, I watched the series as it premiered… I’m a first timer or some such handle. My solution was to do what I do best which is to make this column into a commentary not unlike what I did on THRILLER and COMBAT. Try and make it chatty and hopefully fun.
So what follows is me chatting with me about “last night’s” show… SPECIMEN: UNKNOWN.
INT: Thanks Steve for talking about this episode with me today.
STEVE: Happy to do it, Steve.
INT: What was your first memory of the series?
STEVE: The premier episode of course. Like everyone else who re-watched shows over the summer I saw the promos and got very excited about watching this new ‘monster’ show. I was too young to even know what science fiction was. I loved monster movies and this looked “neat” to me. My Dad thought it looked like “crap” and told me that I would have to watch it on the smaller TV downstairs. Downstairs was our basement and we had a 20 some odd inch Dumont TV which was placed on rickety wooden legs; my 1960’s version of a private screening room. I watched the series alone and in the dark, which my Mom always said was bad for my eyes. She may have been right since I got glasses not too much later.
INT: What did you think of the pilot?
STEVE: It was fantastic. A cool and very original alien, lots of destruction, and the military to solve the problem. Every little thing a growing boy looked for in a TV show. The bar was set and I knew where I would be Monday nights at 7:30, which was when prime time used to begin on the networks.
INT: SPECIMEN: UNKNOWN then, at least from the military angle, must be a fave of yours?
STEVE: Well, Steve I can see where you might think that, but I remember that after the tease, I must of thought…”flowers from space” that’s not scary. An honest kid type response, I think, which after watching the show again mostly holds true. Malevolent daffodils? At least they were from outer space. Even the original spores looked like mushrooms. Killer Mushrooms from outer space.  Kind of silly, don’t you think? It was the early 60’s and hallucinogenic mushrooms were not really as popular until later in the decade. Maybe the OL crew knew something then? 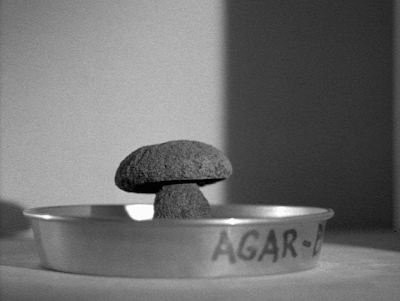 INT: Perhaps. Beyond the premise how does the show hold up for you?
STEVE: I think it is still an interesting outing for a number of reasons. For me at the top of the list is the fine music of FRONTIERE, and the cinematography of the late, and great CONRAD HALL. As a kid, I knew the show looked different from other shows, most of which were shot in B&W as well. Many of them seemed flat, OL reminded me of, in a good way, of comics which I was also addicted to at the time. Many of Hall’s compositions and lighting choices felt like comics covers with his use of dynamic angles and lighting. This episode really benefits from that. In the hands of a lesser artist what is silly about this show might have been a whole lot worse. Also,  it was directed by GERD OSWALD. As a kid, I thought…GERD? What a strange name? I never knew any Gerds growing up, but I never forgot his name, or his shows.
INT: Why?
STEVE: I think his shows had a kind of crafty B movie creativity. On this episode he is careful with his compositions and rarely shows off how impoverished some of his sets were; a dead giveaway of low budget. TV was always a low budget exercise compared to features. Money and time was always the enemy according to the TV pros I have interviewed. Outer Limits was no different. I especially liked how he keeps the camera tight and claustrophobic in the cockpit of the shuttle craft. The one time the space station interior looked cheap to me, was in the opening lab scene with DABNEY COLEMAN, which Oswald did not direct. I still thought it was a good scene, with a nice uncredited turn by Coleman. I never understood why some actors with dialogue did not get credit on some shows. 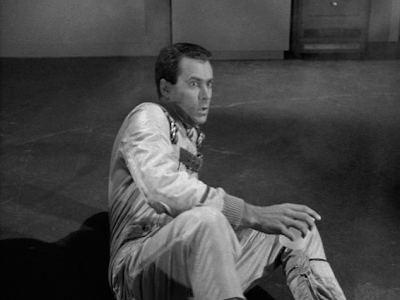 INT: Speaking of performances this show has a very solid cast.
STEVE: It does, and solid performances which also keeps the silly factor to minimum. OL did benefit from a pool of actors that were transitioning from features into television. Richard Anderson told me that if you wanted to make a living, TV acting could provide one. I wonder though how a feature tough guy like STEPHEN MacNALLY felt about the daffodils. I suspect that RICHARD JAECKEL was cast because he spent so much of his career as a movie soldier? His first movie was GUADALCANAL DIARY and he spent a lot of time in uniform over his long career. JOHN KELLOG as well, who might be best known  for his work in the original TWELVE O’CLOCK HIGH, along with other WW2 films like A WALK IN THE SUN. Many actors in TV were from features where their faces were their currency. They walk onto a set with a look and often, a gravitas, which told you so much about their character without words. For many actors their careers served as a kind of back story. The one casting choice that did not work for me was ARTHUR BATANIDES as the shuttle pilot. Most of the time he played thugs or bad guys and it was just a bit weird to see him as a member of the space program. Good actor though. They all were and the good ones worked a lot and many shows would rehire the best. Outer Limits was no different.
INT: They liked GAIL KOBE.
STEVE: They did because she came back for "KEEPER OF THE PURPLE TWILIGHT" in Season 2. I was surprised that she did not get front of show billing, since she was the female lead. One of the other aspects of this episode, and I wonder if it is intentional, is sort of an unspoken or dramatized romantic triangle between KOBE, MacNALLY, and JAECKEL. I always got the impression that MacNALLY was sort of interested in her. You know, while the hubby is in space, etc. Also, why have her stay behind, and not ride into the hospital with her husband? You would think she would demand to ride along. 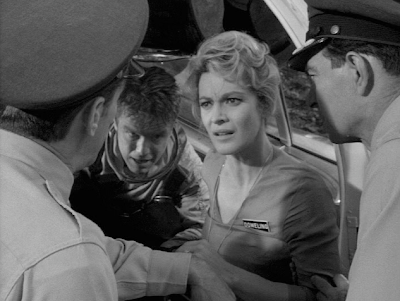 INT: Makes sense.
STEVE: Yet she is left behind with MacNALLY who is left with the task of saving her. Maybe the producers just felt that it would be better to have a woman in some kind of jeopardy. Speaking of imminent danger, I was puzzled by the randomness of when and where the plants would gas the humans? 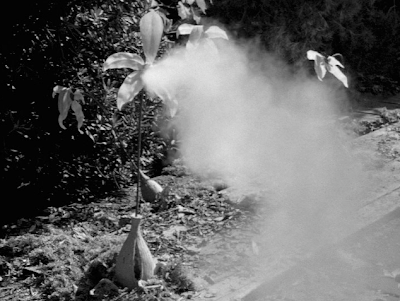 INT: Yeah, it seems like they only attacked who and when the script needed at the moment. Not a lot of internal logic…but as SYDNEY POLLACK said, “a plant doesn’t have logic.”
STEVE: Not these anyway.
INT: I know that you have strong attachment to the COMBAT series, which was also an ABC show at the time. This episode had a couple of direct connections.
STEVE: It did. The climax in “Florida” was staged on lot 3 at MGM, where Vic Morrow and his squad fought many of their skirmishes on COMBAT. The wooden bridge seemed a tad out of era for Florida, but if you noticed, then the show was not working. For me that back lot was almost like my back yard. I watched so many shows filmed there. Also, one of the soldiers gassed by the plants near the shuttlecraft was WALT DAVIS. He was a regular background soldier on COMBAT, and I believe he doubled for RICK JASON sometimes.
INT: Interesting trivia, but time to go on the record…how would you rate this show?
STEVE: A little pushy aren’t you?
INT: We don’t have all day.
STEVE: True. It is a watchable outing, solidly made, and I did not scan through it because of boredom; which is a plus.  It was not very scary, but it had tension and a nicely emotional climax, complete with great music cues to prop things up.  Even as a kid, and a budding soundtrack geek, I could recognize something special about the music, and how it helped to tell the story. The Outer Limits really benefited from reusing their score library I think. It gave a consistent stamp to things, and nicely connected these little weekly monster movies.
My score: 2 Zantis
INT: Speaking of Zantis I’m looking forward to chatting about THE ZANTI MISFITS!
STEVE:  Me too.
Posted by John Scoleri at 4:25 PM