The Outer Limits and Us... and the Schedule!

Before we begin, we feel it's appropriate to set the stage explaining our history with The Outer Limits. 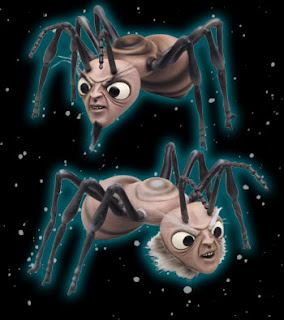 John: My first exposure to The Outer Limits would have been in the mid to late 70s. While I can't remember the first episode that I saw growing up, I will never forget the monster from the most memorable one... the human-faced ants, the Zanti Misfits. I was such a fan of those little guys that I bought a life-size one when Sideshow released them a number of years ago.

Peter: I'm not old enough (believe it or not) to have caught OL on its initial run so it would have been probably on one of its first syndications in the mid to late 60s. I think the first memories I have of OL is of the creature with the boomerang from "Fun and Games." I do remember the Zantis giving me nightmares and causing a deep fear of bugs (especially the kind with human heads). I also can very clearly recall sitting on the edge of my couch while Adam West hung on the edge of his rock in "The Invisible Enemy." Having watched a few of these already in the past couple weeks, I've marveled at how close in style they are to Thriller, at least in the photography, shadows, and atmosphere, if not in the themes.
JS: I don't know if this is true for many of you, but for the most part, my memories of The Outer Limits are of the monsters themselves, and not the stories from which they sprang. 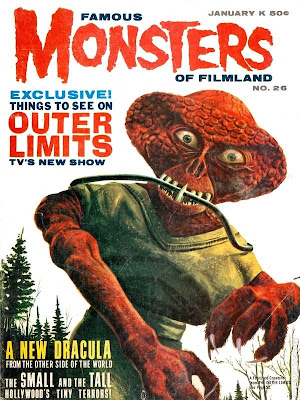 JS: That said, I'm looking forward to revisiting the series—If I had to guess I'd say I've probably only seen half of the episodes, and of those many have long since been forgotten. But there are some that have stuck with me through the years; one of which I will be providing the special "Spotlight On" entry for. But that's still a number of weeks away, so I won't spoil the surprise.
PE: I'm looking forward with some trepidation. Some of these are bound to disappoint my memories. I just pray the Harlan Ellison fans aren't as rabid as the "Pigeons." I think what excites me most is the surprises we have lined up for our readers this time.


Need a tease? Check out a few commercial promos here.


If you followed A Thriller A Day, we thought that we'd point out how we'll be doing things a little bit differently with We Are Controlling Transmission. As previously noted, we'll only be running episode reviews Monday through Friday. And this time out, we've decided to approach the episodes in production order, as opposed to broadcast order. To that end, here is the schedule in advance so you can keep in sync with us.
1/3 The Galaxy Being
1/4 The Borderland
1/5 The Human Factor
1/6 Tourist Attraction
1/7 The Architects of Fear

Rather than giving you a cumulative rating, Peter and John's individual ratings will be listed separately (so it will be clear for you to direct your hate mail to Peter). Ratings will be in the form of 0-4 Zanti Misfits:

In the absence of commentaries on the DVD sets, we have assembled a panel of Outer Limits experts to provide special "Spotlight On" essays for particular episodes. If you followed A Thriller A Day, several names will be familiar to you, however we're pleased to say you'll find a few new voices as well. Watch for our daily reviews to be posted each morning, and the "Spotlight On..." essays for the episode of the day in the afternoon.
Check back tomorrow for a Season One Primer from the leading authority on all things Outer Limits, and then return on Monday for our look at the premiere episode of The Outer Limits: "The Galaxy Being."
And now we'll leave you with one last promo video to whet your appetite...
Posted by John Scoleri at 12:00 AM