Spotlight On "The Man with the Power"

Contracting Human
by David C. Holcomb
Written by Jerome Ross. Directed by László Benedek. Cast: Donald Pleasence (Harold J. Finely); John Marley (ahem, Dr. Sigmund Hindeman); Priscilla Morrill (Vera Finley); Edward Platt (Dean Radcliffe); Fred Beir (Steve Crandon); Frank Maxwell (Dr. Keenan). Original broadcast: October 7, 1963.
Story: Meek professor Harold J. Finley offers his brain to science in an attempt to harness ambient energy via a device of his own creation. While clearly first-rate at moving large rocks, the harnessing device has an unforeseen effect – unleashing Finley’s ripe, aggression-prone id in the form of a murderous electro-jellyfish.
“The Man with the Power” and “The Sixth Finger,” though produced several weeks apart, were broadcast consecutively – knowingly or not, an apt arrangement: they share a substantial thematic connection, as well as the casting of intense and unique British character actors, and also overlapping in disappointments in both story and technical execution. The pair accidentally exists as a dyadic statement on the perils of expanding the mind, an odd lesson from this series: humanity came off as distressingly flawed but ultimately salvageable in the OL universe, but in this pair we are portrayed as too repressed and too primitive to make a go of significant development, no matter what route we may try. We are monkeys, worms, with death (literal or slow as a tree, through chronic unfulfillment) our fate should we attempt to advance ahead of schedule. Set the clock, then – we can handle power about as well as we would manage an extra digit. Neither suits us. 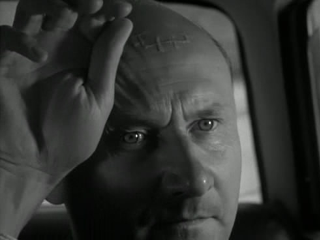 It’s a conventional, even stale sci-fi trope, and original sin recast – reaching beyond our grasp and facing unpredicted dire consequences. It is expressed in “Power” in two related ways: through a soft-science vehicle (psychiatry, specifically psychoanalysis) and embodied by the quirkiest subject imaginable, Donald Pleasence. As Harold J. Finley, a meek and likely mediocre science professor browbeat by spouse, dean, and tree trimmers alike, Pleasence represents the potential for unacknowledged anger to effect destruction. (This is currently standard psychological insight; in the early 1960s, not so much.) Finley’s “gateway link” brain implantation captures external energy, conceivably for the good of humanity, and unknowingly channels internal rage to the point of (petty) murder. A man so excessively constrained by super-ego, the trope demands, must have an id as big and nasty as, well, a monstrous floating electro-jellyfish.
Fair enough. The expression of this thematic line plays out pretty much as one might expect, with a (very) slow dawning of the truth of Finley’s power, lots of psychoanalytic lip service in the person of John Marley as a shrink named Sigmund, scenes of Finley suffering humiliation at the hands his shrewish wife and others, and – given the show’s need for a characteristic bear – many scenes of Finley’s id, the noted jellyfish, on the attack. Once the story is established and the tension exemplified, it simply has nowhere to go but back over already-trod ground, which the episode does, repeatedly.  So the id blob gets lots of screen time (and is effective exactly once, looking Cthulu-esque as it smacks down the offending tree maintenance crew), and filling the hour, the scientists attempting to use Finley’s power wander in optimism and ignorance, those who have wronged Finley either die or beg his forgiveness, and Pleasence, alas, suffers and mutters and mutters and suffers, tedium ad infinitum. 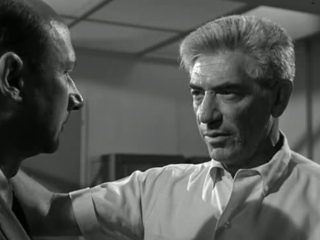 That’s a hard trick to manage: a tedious Donald Pleasence. Existing and prevailing in large part due to his being cast as Finley, a role probably better suited to Wally Cox, “The Man with the Power” seems simultaneously tailor-made for and an utter misuse of the actor’s persona and particular talent; where he should expand the episode, the writing shrinks him. So does the shrink. That the episode was crafted during Pleasence’ most interesting and productive period (Dr. Crippen, Pinter, The Great Escape, Polanski, and as Satan in the unaccountably satisfying Christ-bio The Greatest Story Ever Told) heightens the frustration, rendering the episode simultaneously emblematic and problematic as the layers of self revealed in the actor’s more richly-drawn characters are only hinted at here. Finley is supposed to be multi-layered but he comes off as one dimensional: he’s a doormat, with a brewing rage just below the surface. A pretty common bloke, in other words.
It seems possible that Jerome Ross, a veteran TV scriptwriter with nothing particularly noteworthy on his résumé, assumed an actor such as Pleasence would add needed depth to his characterization. Fair assumption, as Pleasence consistently had a way of conveying something deeper, sardonic, and far more menacing than any id blob could hope to compete with. It’s precisely that menace that is missing in Ross’s script, and the actor, trying his best, can’t inflate it alone.
Spoiler: The episode’s denouement holds some fascination, as Finley’s apparent suicide is a simultaneous act of selflessness and self-pity. It’s interestingly lit and filmed, the score adds heft, and Pleasence conveys a sense of the misery of needing to be recognized, and the sad truth of sacrificing recognition for something better, more fully than any of the earlier, obvious and cloying scenes. It is a genuine Outer Limits moment after a long, frequently boring slog. 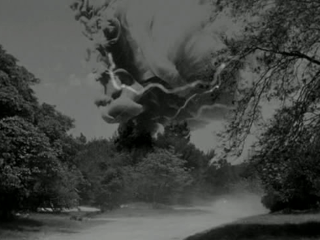 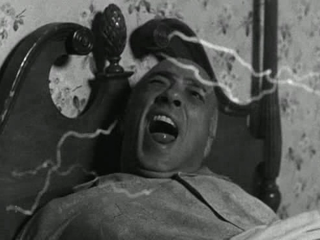 Still, it’s The Outer Limits: the show prevails because it speaks differently than anything else like it, it’s clearer and with feeling. As one of an inadvertent pair with “The Sixth Finger,” “The Man with the Power” is the stronger in the sense of being a more iconic first-season Outer Limits episode: Dominic Frontiere’s strong and evocative musical cues often convey the sense of menace lacking in the script – pay attention to the cymbals and strings, like something burning in the background. The cinematography of Conrad Hall, consistently beautiful and perceptive, in many ways fills in for the direction of Gerd Oswald, this episode’s natural would-be director: Benedek, a fellow émigré, lacked Oswald’s ability to unbridle his European formalism and go full-bore expressionistic; consequently, this episode (and his most famous work, The Wild One from 1953) directorially just kind of sits there. The special effects are a grand effort on the part of Projects Unlimited, to be sure, but remain too static to suggest true monstrosity; again, the stasis may be from over-exposure or by an overall lacking dynamism. 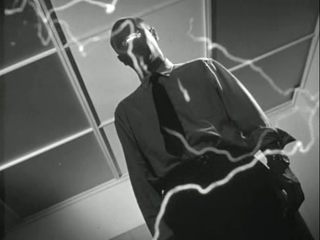 Though not quite a failure, the frustrations of “The Man with the Power” ultimately outweigh its glories. Finally it is the wasting of Pleasence, in a rare U.S television appearance at the height of his abilities, and on The Outer Limits no less – that’s the greatest downfall, contracting the scope of an actor (and consequently of an episode) whose expansiveness lay in his understated intensity. While “The Sixth Finger” betrays its own set of disappointments, none are such glaring wastes.
So, lesson: Energy-harnessing brain implants don’t work. Let’s try evolution next time out.
David C. Holcomb is a psychologist and educator in New Mexico. With twin brother Mark, he has channeled a life-long fascination with The Outer Limits into, well, a life-long fascination; he contributed to their website on the subject (it appears to have a long life). He’s had many significant dreams in The Outer Limits style, music and all. He’s a fifty-year-old man – whaddya gonna do about it?
Posted by John Scoleri at 2:19 PM