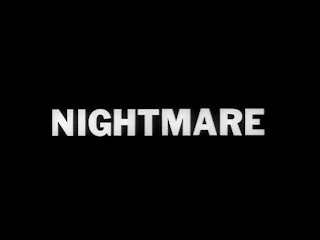 A group of international soldiers on their way to Ebon are captured and thrown into an Ebonite POW camp. Can the men survive the Ebonite interrogation techniques without giving up the information the demon-like creatures are after?
JS: Finally—The evil aliens I've been trying to warn you about all along are finally here!
PE: Yeah, but...

JS: How embarrassing is it to be captured right in the middle of your heading-into-battle pep talk?

PE: How embarrassing is it to have this episode on your IMDB credits?

JS: I'm a huge fan of the Ebonites, in part because they remind me of Stan Winston's creatures from the 1972 TV movie Gargoyles (who I favor only because I was exposed to them first).

PE: How about them capes! 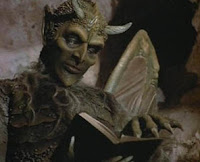 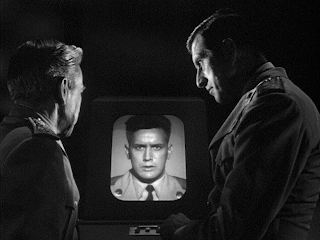 PE: A powerful scene when Shatner... ahem, Sheen, breaks from the march and is beat down by the Head Ebonite. Obviously, his scepter is armed with spicy salsa for once Sheen is zapped in the mouth, he spends a bit of time waving his hands in front of him and sweating. Until I found out about the deadly "Salsa Ray" (from David J. Schow's The Outer Limits Companion, pg. 186), I naturally assumed this was Sheen's obligatory "set breakdown" he undergoes during every performance. I also admired his spot-on imitations of Patty Duke in The Miracle Worker and of Adam Sandler as Canteen Boy (a real trick I know but this is The Outer Limits so he can, ostensibly, see into the future, no?). Frickin' genius! Obviously, his method acting caught on since, as the show progresses (digresses?), each actor in turn gets to ham it up. Only Ed Nelson seems to know how to keep his emotions in check.

JS: This is an interesting episode, design-wise. Fortunately, it's perfectly believable that a cell might have flat ceilings and walls, as well as some bizarre yet interesting rock-like formations.

PE: I don't care how much crap I get for saying this but "Nightmare" is a nightmare from beginning to end. It's one of those bad "Four Characters in a Big Box Searching for an Exit in the Dark of the Night" episodes of The Twilight Zone. What's the big secret? We know what the hell is going on ten minutes in and all that's left is loopy dialogue (Captain Brookman to Major Jong: "Is that all you care about, Major, survival?" Jong: "That...and the smell of fog in the San Francisco night"), bad acting, weird sets, atmospheric lighting and some cool creature suits. Am I the only one who can't understand a word Lt. Krug (Sasha Harden) is saying? Are the six survivors at the climax standing in a circle listening to the Control Voice? 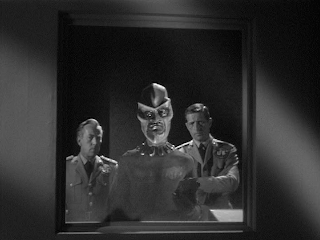 JS: Unfortunately, Stefano plays his cards far too early, when they show the viewing audience the two human officers in the room with the Ebonite interrogator. Whose idea was it to blow that little surprise?

PE: My L-OL moment this episode (among many): When the Head Ebonite is interrogating Dix, the Private simply mouths his name, rank and serial number (remember, he's still under the spell of Salsa). That's not good enough for the "alien" and he says so: "That won't do, Dix. Your name, rank and serial number are useful only to those Earthly relatives who will apply for your insurance." On cue, Dix's portly ma (Ernest Borgnine), from Brooklyn I assume, appears behind him, holding out her arms needily, moaning, "I want my son, not his insurance!" My new television should arrive tomorrow.
JS: Drat. Foiled again. So much for my evil alien conspiracy theory. I should have known something was up when they lowered the speaker on strings. No respectable Ebonite would have let that slip through unnoticed.

PE: Don't worry, John. When Cameron gets around to scraping the bottom of the barrel and ripping this show off, I'm sure he won't make the same mistakes. CGI!
JS RATING: 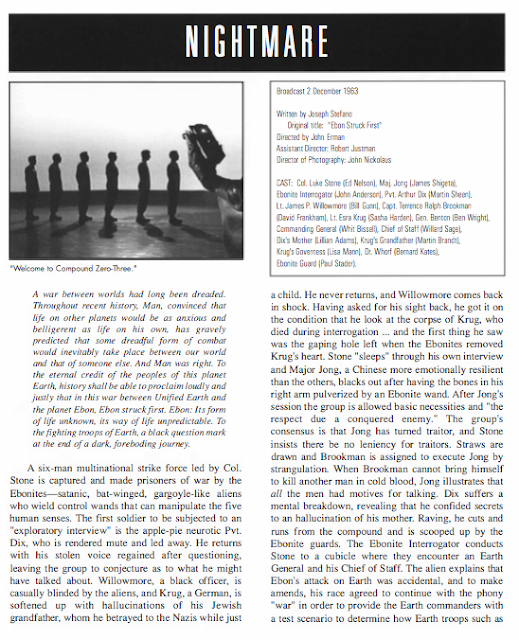 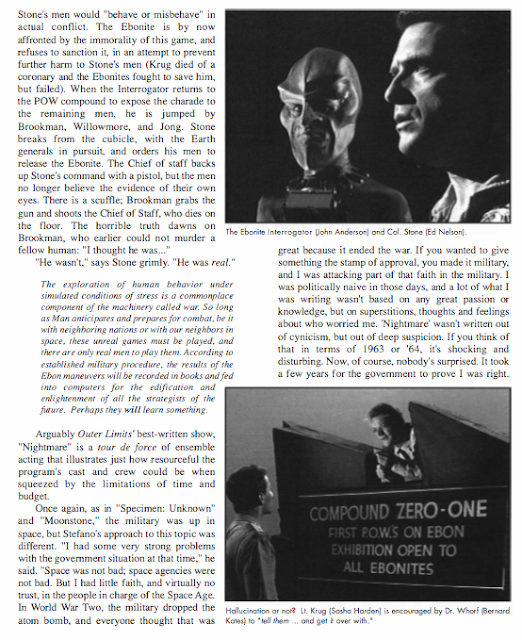 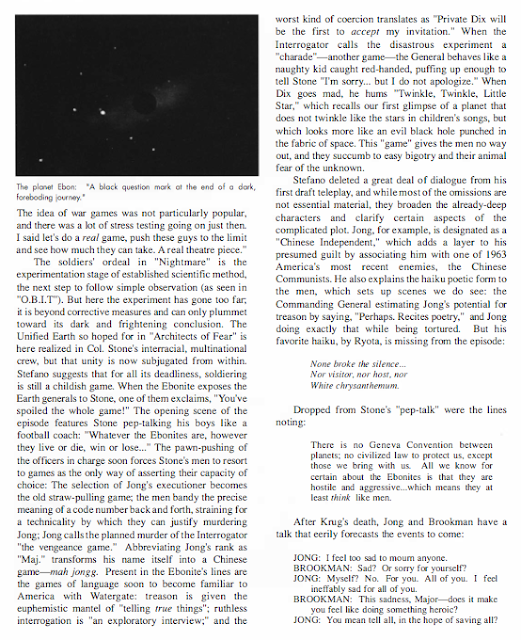 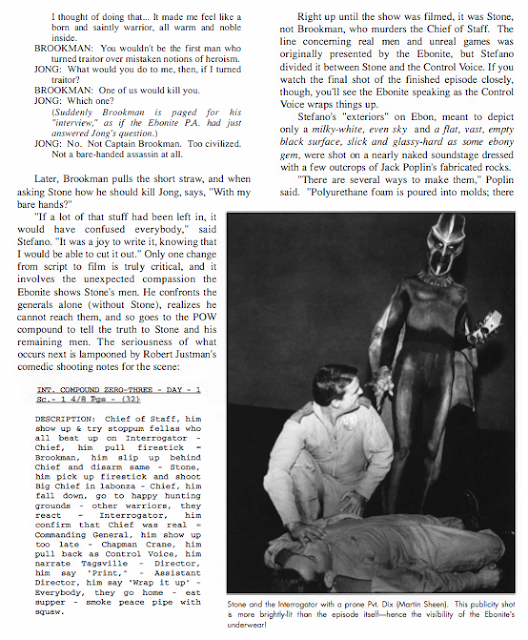 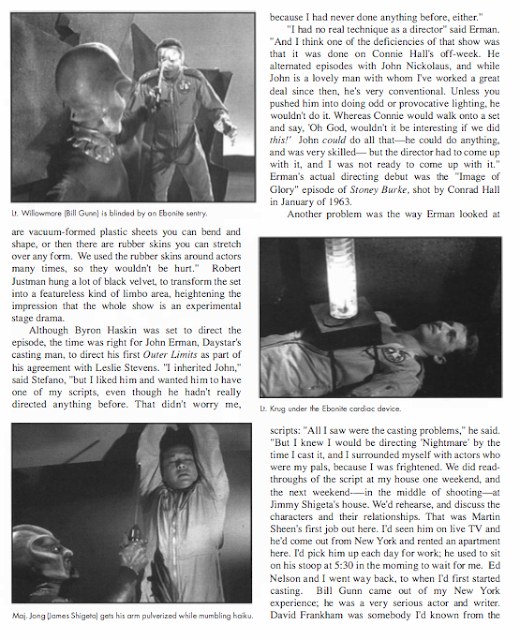 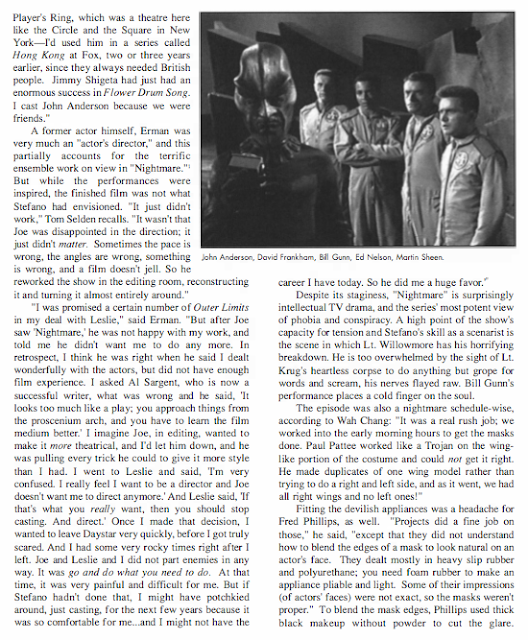 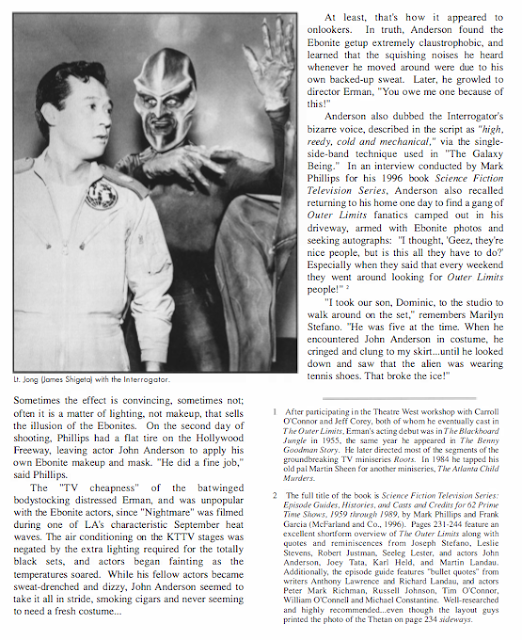 
Be sure to check back later today for Larry Blamire's Spotlight on "Nightmare," and come back tomorrow for an extra-special Spotlight on the music of "Nightmare" by Larry Rapchak.