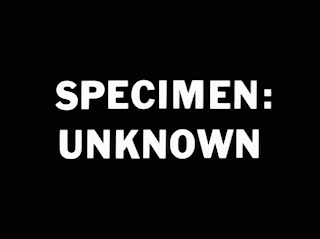 Production Order #10
Broadcast Order #22
Original Airdate: 2/24/64
Starring Russell Johnson, Richard Jaeckel, Stephen McNally.
Written by Stephen Lord.
Directed by Gerd Oswald.
Five astronauts in a space station learn they've been contaminated by a deadly spore, represented first as a mushroom then as a flower that spits out a toxic gas. When one of their number dies from the gas, the other four must decide if they can land on Earth again and risk infecting the world's population. 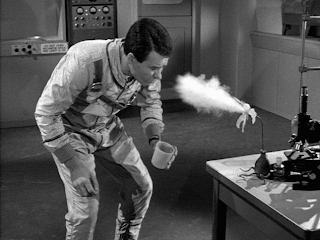 JS: I'll bet the squirting flower you had as a kid didn't also have a ping-pong ball launcher. I do enjoy a good tale of plants from space, both the human replicating pod variety and the stinger-snapping Triffid. Given what they had to work with, I thought they did a nice job articulating the alien flowers when emitting gasses—beware when that top petal flips up. The spore launching... not quite as effective.
PE: While on board, Doweling (Jaeckel) gets a promotion as Howard addresses him as Major Doweling and later his wife calls him Captain.
JS: With so many crew members running around, how can you even keep track of them all? 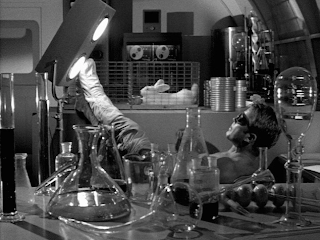 PE: At least the Air Force has taught these men to cope with death. Immediately following the space "burial" of Lt. Howard, the obviously distraught Lt. Halper (Peter Baldwin) happens upon Captain Doweling, sunning himself in front of a heat lamp. Referring to his dead comrade, Halper reflectively admits "I can't believe he's dead," adjusts the sun lamp, smiles and exclaims "It sure will be nice to lie in some good old-fashioned Earth-type sunlight after nine days of this." And how 'bout them Jets?
JS: Something tells me if Halper had an emotional breakdown, you still wouldn't have been satisfied.

PE: Actor Peter Baldwin went on to have quite a career in TV but as a director. In the 1980s and 90s, he directed episodes of several hit shows (Too Close for Comfort, Full House, Newhart, Murphy Brown), winning an Emmy for an episode of The Wonder Years.
JS: I've always been a Russell Johnson fan, and I felt he was criminally underutilized in this episode.


PE: These incredible flowers can even make their containers walk across the ship's floor!
JS: I refuse to believe that securing the cargo wasn't on the re-entry checklist. At least they were all clearly labeled, um, "Specimen: Unknown." You'd think they might have gone ahead and made up a name for it... Space Mushroom, Alien Hibiscus, or even Team Adonis Squirt n' Pop™ Flower... 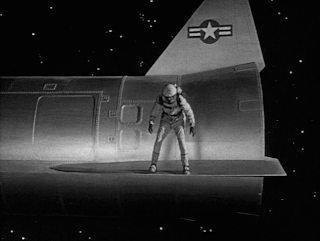 PE: Repeat after me: Walking outside the ship with a lifeline is for sissies.
JS: Space Surfing! And this was years before Dark Star!

PE: I love when Colonel MacWilliams finally tracks down the General on the phone, tells him "General, we have a very grave situation," waits a beat, hangs up the phone, and says "The General says it's my call." Wouldn't the General at least want to know what the "grave situation" was before he turned over the keys to the Cadillac and went back to the 9th hole?

JS: The music that plays as they all run out of the room is an oddly chosen up-tempo happy-go-lucky riff that seems strangely out of place. Odd timing to get all Brady Bunch on us...
PE: I know I'm not supposed to point out the lapses in logic (I'm supposed to lean back, relax, and comment on the atmospheric lighting on board the ship—what, no checkerboard patterns?), but if, and I'm just saying if, I knew the crashed spaceship was infested, inside and out, with a killer spore, I'd probably approach the ship with protective gear and armed with more than just a crowbar. Just sayin'.
JS: I guess he didn't have a can opener handy. Sad to say that in today's world, there's no way that shuttle re-enters Earth atmosphere without being obliterated by the government. Ah, simpler times... As for the crashed shuttle—is it just me, or was that a clown car of a spaceship? From the outside, the whole thing looks like if couldn't fit an upright Russell Johnson comfortably. 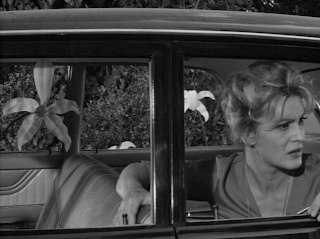 PE: When there are poisonous plants outside your car threatening you with toxic vapor, DO NOT roll up your window.

JS: My favorite alien plant move was the 'up periscope,' but I had a smile on my face every time one crept up on our unsuspecting heroes.
PE:I wanted to see the ultimate bad flower: one with a cigarette hanging from its ovary, perhaps a wolf whistle as it ogles the helpless dame? 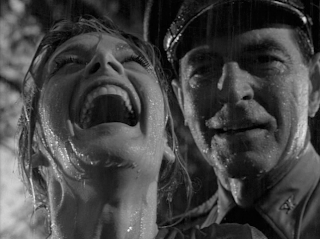 JS: Janet Doweling (Gail Kobe) was damn excited when it started to rain (well, actually, you never saw the Colonel's hands in that shot, did you? -PE). I do wish they had ended showing the dead killed plants each lying open with hundreds of new spores just waiting for the sunshine to return. I guess that's a side effect of my being raised on the films of George Romero.
PE: Once again, Mother Nature destroys the aliens! 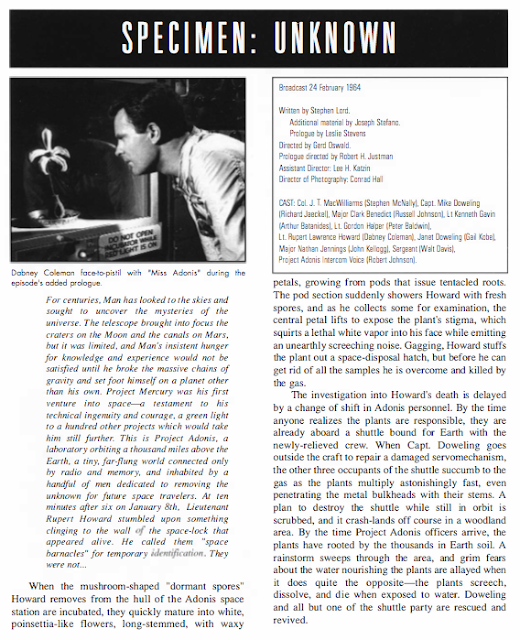 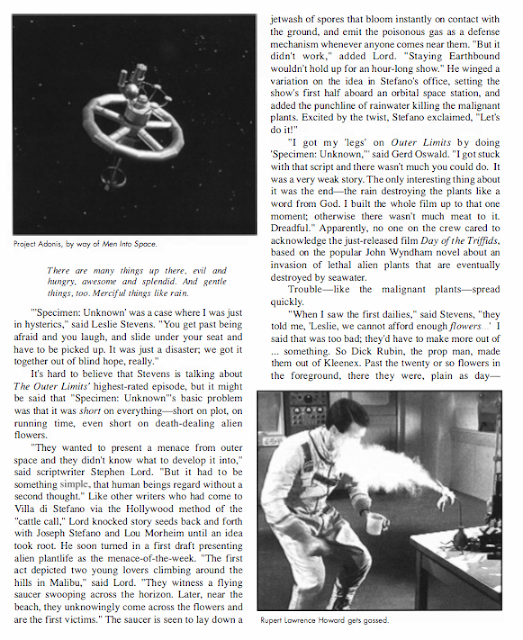 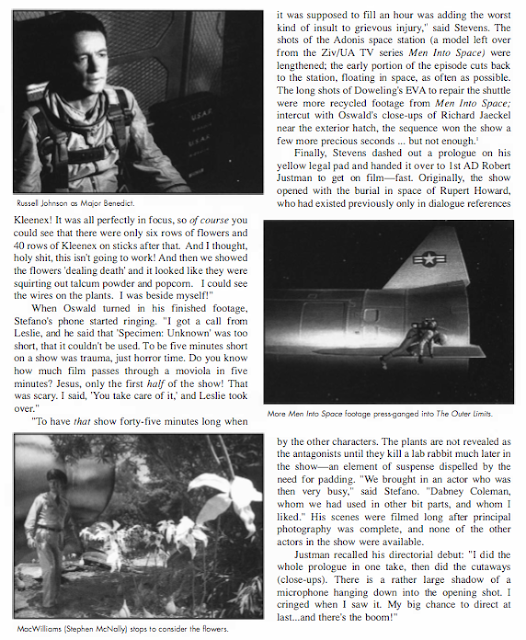 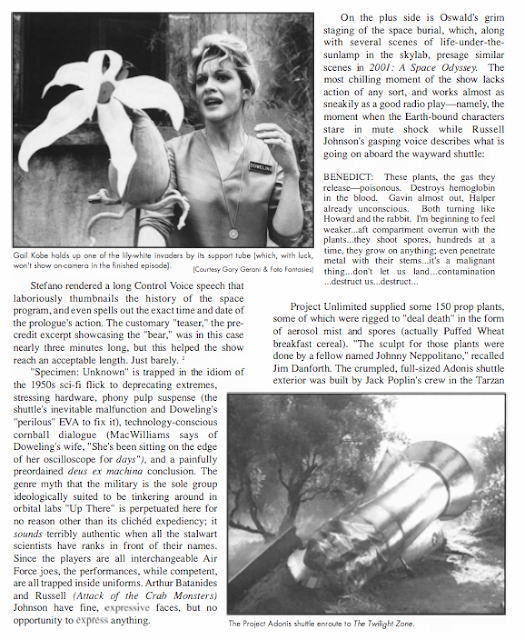 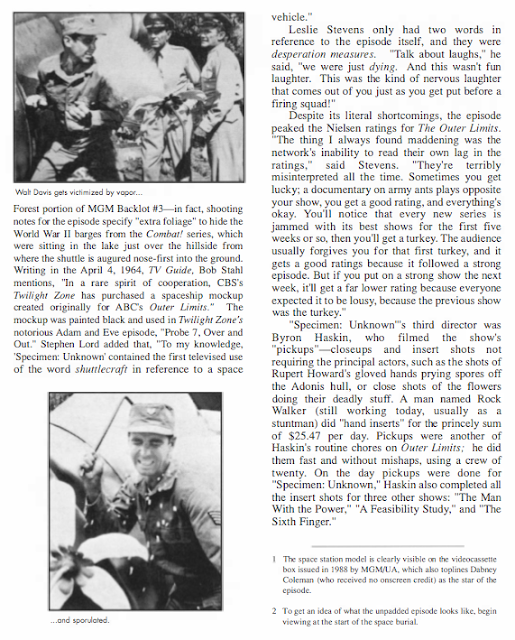 From The Outer Limits Companion, Copyright © David J. Schow, 1986, 1998.  All Rights Reserved.  Used by permission and by special arrangement with the author.
Next Up... 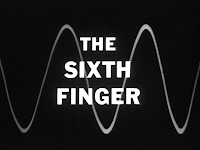