Interview with a survivor of the Zanti Holocaust

One of the few living survivors of the 1960s Zanti “Desert Holocaust,” former prisoner Lembog relates a few memories for our panel.
(translated from the original Zanti by Oliver Lowenbruck) 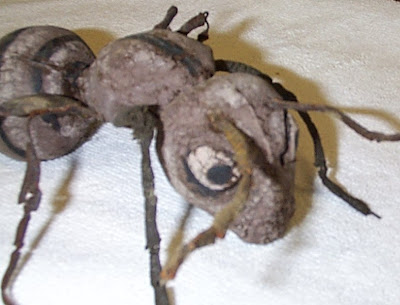 WACT:  What really happened out there in the desert?
LEMBOG:  Well, you have to understand we were sandbagged by our own government and sent to an alien planet to die.  They told us we were going on a field trip and I began to smell a rat when they sent along only one Regent — a real dick by the way, named Zloboz, but we all called him “BFO,” which stood for “Big Fat Ovipositor.”  Zloboz decided to chase after some Earth chick, so we decided to fire up the ship and, you know, see some sights.  Earth is pretty ugly.  And then, of course, the damned ship runs out of fuel and we plonk right down in the middle of a gang of bipeds who were, like, really beige and hostile.  Like most rurals, they were armed to the teeth.  We didn’t have a chance.  They had one thing one their minds – genocide.  We nailed a few of them, though.  Ugly mothers.
WACT:  Did you attack any Earth soldiers yourself?
LEMBOG:  Yeah, I bit one guy on the leg and he tried to squash me.  My back hips are still skewed thanks to his big rubber heel.  If I’d’a had a machine gun, things would have been different, is all I’m sayin’.
WACT:  Stuck here on Earth, then what happened?
LEMBOG:  The usual.  I got representation and did one other OUTER LIMITS, but they made me wear prosthetics.  It wasn’t much of a part, but work is work, right?  Some of the other guys got sponsorship.  I saw a picture of one, I think his name was Lonzo, on the internet.  Man, he was one of the ones that got blown in half.  Poor sucker, still soldiering on with only two legs.  That’s gotta suck. 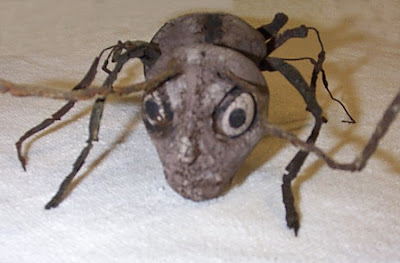 WACT:  Do you miss the planet Zanti?
LEMBOG:  Hell, no!  That planet is a dive.  Virtually no snack food on Zanti, and on Earth it’s everywhere.  I like Men’s Pocky – the chocolate kind.
WACT:  Were you actually a criminal?
LEMBOG:  You have to understand that Zanti has a very bizarre idea of what constitutes a “crime,” and hence brands one as a Misfit.  I had a few, um, financial indiscretions.  Bad checks, that kind of thing.  You know what?  You should send Bernie Madoff to Zanti.  That would tighten up that sucker’s wig in a hurry.  Funny thing is, a lot of crap that is illegal on Zanti is perfectly okay here.  Like, you guys can kill each other.  Lying is just part of business.  We fit right in.  It was easy for me to make some investments, build a financial cushion for my retirement.  The truth has nothing to do with being successful, on Earth.  Pretty freakin’ cool.
WACT:  Are you in touch with other Zanti survivors?
LEMBOG:  I noticed an old buddy of mine, Leblo, has a Facebook page, but I’m not much into social media.  Your Earth ants are totally not into privacy at all; yuck, I mean, who wants that many buddies in your back pocket all the time?  I’d be like showering with your grandma.  Total destruction to them, I say.
WACT:  Any final thoughts for our readership?
LEMBOG:  Yeah – check out my band, dudes.  Oh, and that “Flat Zanti” guy?  He’s pretty fucking funny!

OLIVER LOWENBRUCK was a short story writer and OUTER LIMITS enthusiast who died tragically during a zombie mishap detailed in the story, "Dying Words."  His tombstone can be glimpsed in the film THE CROW.  He is survived by his twin brother, Adrian.  (We're pretty sure that Oliver conducted this interview after his death, so apparently he's still around.)


It's Zanti Day at We Are Controlling Transmission!

Be sure to check our earlier posts from today to see what you've missed!


Come back at 2pm for Steve Mitchell's Spotlight on "The Zanti Misfits."

And since we know there's no such thing as too much (too many?) when it comes to the Zanti Misfits, be sure to check out the Flat Zanti homepage RIGHT NOW to get in on the invasion.
Posted by John Scoleri at 12:00 PM