SPOTLIGHT ON: “THE PROBE”

by Davd J. Schow
Just like on the DVD sets, “The Probe” is stranded here on a Monday, isolated, bereft and foresworn.  On disc, given the unwieldy mathematics of distributing 17 episodes over six disc sides, “The Probe” wound up all by its lonesome on Side Six … as if anyone would really make the effort to flip the disc over to witness this sad little death-fart of The Outer Limits.
As Brady assistant B. Ritchie Payne told me, “there are some episodes you would not want to spend a lonely evening looking at,” and “The Probe” richly fulfills this compact.
Besides, it’s the last episode, and WACT followers are already bailing … ditching this final class, because, who’s gonna know?  It’s painful to admit that the best performance in this show is by a sweating Hungarian in a silver suit that looks like a big pile of rubber throwup.
JS & PE were not looking forward to doing “An Episode of The King Family-a-Day!”  Feel their pain.
“The Probe” retains the science-fictional ability to stretch time.  If you don’t believe that, just take a look, and feel your life ebbing away.  What a far cry from “Nightmare,” also shot on nearly naked soundstages.  How long ago that seems, now.
And the final Control Voice speech holds a lingering wisp of melancholy, yet it is hopeful, suggesting that the spark of The Outer Limits would not be stamped completely out.  And it wasn’t.  Perversely enough, for stations “stripping” the show in syndication, the idea suggested by the final CV speech would be fulfilled the very next week, when “The Galaxy Being” came around again on the rotation. 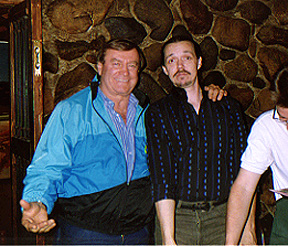 Regardless, “The Probe” brought some joy into my existence, as it allowed me to meet and hang out with the wonderful William (Bill) Boyett, whom I had always cherished as the snarky alien sports-car enthusiast and metalhead in The Hidden:  “I want this car.  I need the keys.”
“Thank you.  ‘Bye.”  Kaboom!
Check back later today for Ted Rypel's Spotlight on "The Probe."