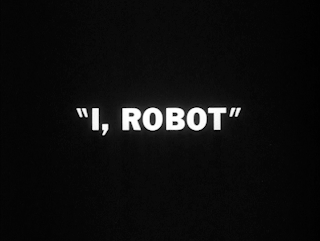 Adam the robot (Read Morgan) is put on trial for the murder of his creator  (Peter Brocco) after he's found over the dead Doc's body. The doc's lovely niece Nina (Hill) coaxes a defense attorney (da Silva) out of retirement to take the case.
JS: I. AM. NOT. SURE. WHERE. TO. BEGIN. So let's start with the bad robot voice. I mean this was the 60s... weren't we past that? And to add insult to injury, during the flashback to his initial creation, the delivery is like robot baby talk.
PE: Let me start here: Nina Link is one hot babe. Unfortunately, she's not the main focus. That would be the... um, flexibly-suited robot. 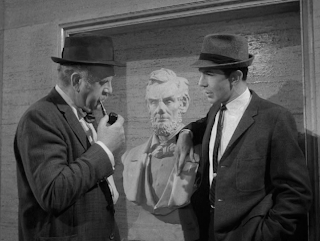 JS: Once again, we're teased with the presence of the great Leonard (Invasion of the Body Snatchers '78) Nimoy, who despite having more screen time than in the all-time worst episode of TOL ("Production and Decay of Strange Particles" for those of you not keeping score at home), returns to another low point for what amounts to a glorified cameo. I do love how he leans on the Abraham Lincoln bust. Make yourself at home, Lenny. And he does have a great line with, "You may end up a skillet, tin man, but I'm gonna make you famous." Interestingly enough, the same words that Gene Roddenberry would soon say to him.

PE: It's almost startling to hear Nimoy laugh and deliver a line with some kind of emotion. Equally startling to hear the bad dialogue that flows from his mouth during his brief screen time.
JS: I love Marianna Hill's grand entrance; cavalierly bursting into the sheriff's station lockup that the sheriff himself needs keys to get out of. Of course there are a number of clues that led me to believe there was something going on between Nina and her 'cousin' Adam (She was the niece, right? Not the daughter. That would be weird).

JS: First off, I don't think Adam initially fell because he didn't know how to walk. I think Nina's legs distracted him. 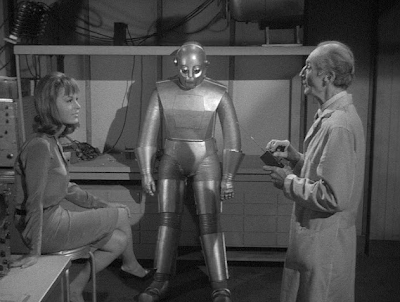 JS: And just look at the way she looks at him when he's doing his reading lesson—love is in the air, I tell ya. 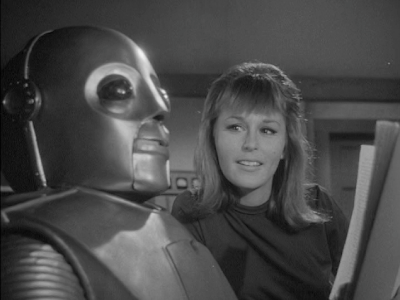 JS: While there's a revelation that Adam had read Frankenstein, they omitted the fact that he caught the Karloff film at the drive-in (perhaps on a date with Nina?). How else can we explain the coincidence with the little girl at the lake?

PE: Mrs. MacRae (Mary Jackson), the professor's maid, does a great impersonation of the old lady who first encounters the Monster at the wreckage of the windmill in Bride of Frankenstein. 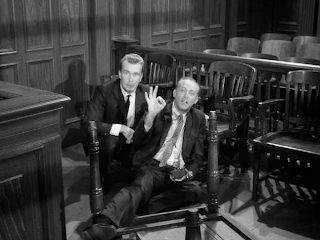 JS: Good catch! The bulk of the episode is the lackluster courtroom drama as the case is made against Adam. The key witness for the prosecution is an annoying brat, but the real damning evidence comes in the form of Andy's (unfortunately unseen) Projects Unlimited toggle switch the prosecution flips from FRIENDLY to VIOLENT. Levity ensues as they struggle to find the off switch, which they manage to get to just before Adam throttles the judge.

PE: Lackluster wasn't really the word I was thinking of. Whose idea was it to try melding The Outer Limits with Perry Mason? If the experiment had been a success, would we have seen crossovers with Petticoat Junction (Uncle Joe whips up an unusually powerful batch of moonshine out behind The Shady Rest that spurs a deadly wave of narcolepsy throughout Hooterville), Mister Ed (Ed finds out that the female he's paired up with on a blind date is actually one of the Four Mares of the Apocalypse), or maybe Gunsmoke (Marshall Dillon finds more time in his day to spend with Miss Kitty —and less on showdowns—when a Thetan ray-gun inexplicably winds up in one of his jail cells)? (Didn't we just watch The Outer Green Acres Limits? - JS). And nice touch casting an actor who will remind one of Spencer Tracy from Inherit the Wind. 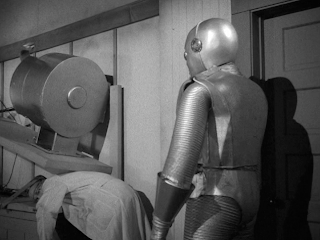 JS: As if we need to hear Adam's testimony to prove his innocence, it does give us a chance via flashback to see the circumstances leading to the Doc's death. I hereby bequeath this screenshot to the WACT community to caption as they see fit (looks like you mistakenly grabbed a shot from The Invisibles? -PE). 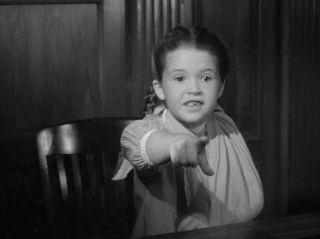 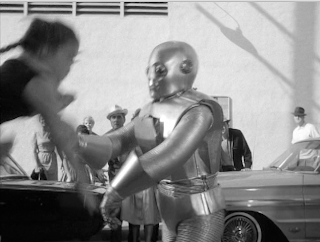 PE: We did get two legitimate L-OL scenes amidst the drudgery: First, obnoxious little Evie (Christine Matchett), arm in sling, steps down out of the witness stand after being questioned, and points right at Adam Link, spouting "He's the one, the tin man." But for sheer entertainment, it doesn't get any better than Adam's run for freedom from the shotgun-toting villagers. The robot stands on a bridge, gets shot at, and does a double take as if he's not sure he was the target. When he puts up his hand as if to say "Hey guys, hang on a sec, beers are on me," he's the recipient of another wide shot, and does his best imitation of Charlie Sheen heading for his next interview. "Feet don't fail me now!"

JS: I think had it been written by Rod Serling, the outcome of the episode might have been more somber, especially for the Monster Kids who grew up rooting for the misunderstood beastie. But here it's uninspired if not downright laughable. At least Adam gets one last chance to break a few more bones by tossing the little girl offscreen for old time's sake.

PE: Oh, but Nimoy's there to catch her. Great scene.  I think if it had been written by Rod Serling, it would not be remembered as one of his best. This thing was doomed from the start with a dopey concept that probably played well in the 1930s pulps it was taken from but here contains nothing to keep one's interest. 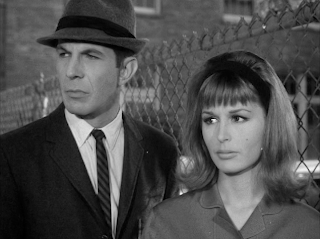 JS: One Zanti for giving us babe of the week Marianna Hill and a Lincoln-leaning Leonard Nimoy.

PE: One-half Zanti for the cutey pie. That's about it. But Mariana Hill moves into first place on my OL Babe of All-Time, knocking Grace Lee Whitney's shapely behind to second place (sorry, Gracey!).

JS: I'll be curious to hear how many of our readers that saw this on its initial release were bummed that they missed the chance of having the perfect Halloween costume idea by just a few weeks.

PE: Who would have wanted to dress up like a grumpy old lawyer?

David J. Schow on "I, Robot" (Click on pages to enlarge): 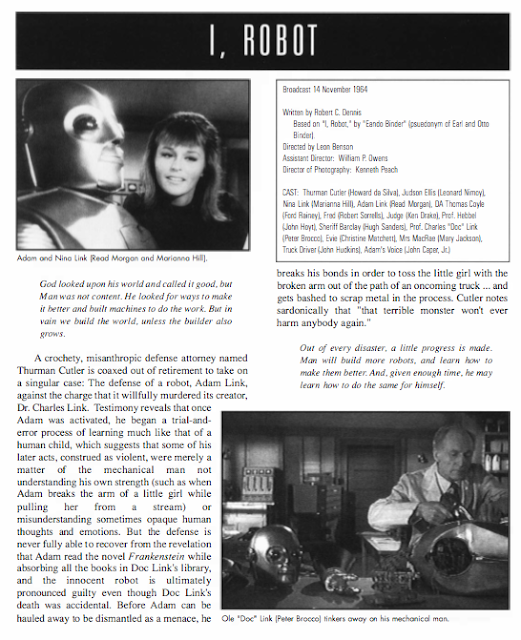 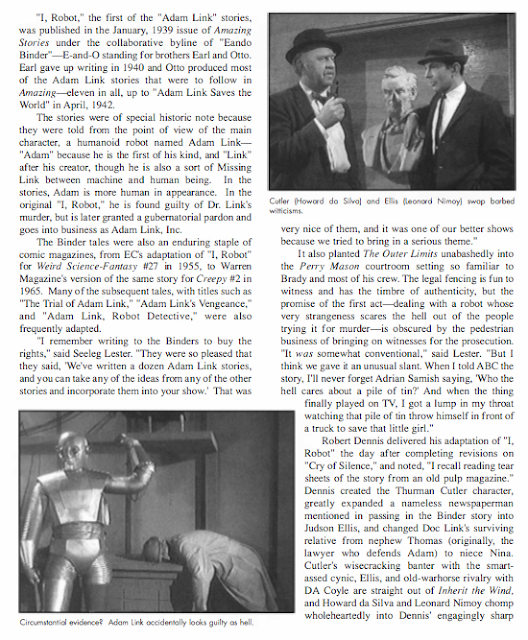 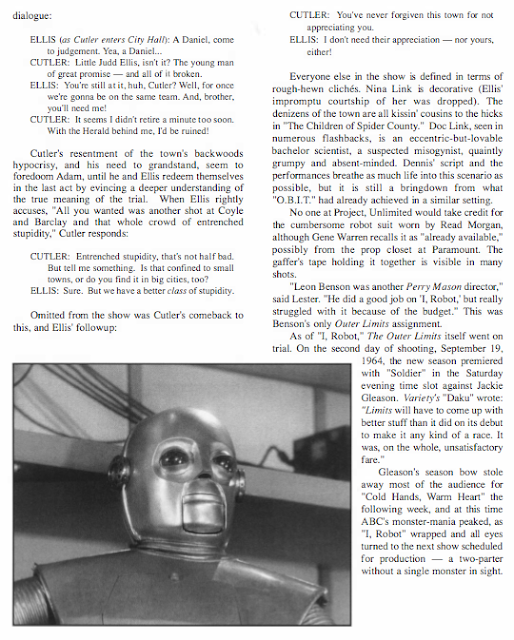