The Birth of "Fantastic Television"

By Gary Gerani
A number of fans have asked about the “origin” of my trade paperback FANTASTIC TELEVISION, which was published back in 1977 by Harmony Books (a division of Crown Publishing).  The earliest inspiration for FT started a full ten years earlier.  Like most horror movie fans of the 1960s, I cherished Forry’s FAMOUS MONSTERS mag and the occasional issue of Calvin Beck’s CASTLE OF FRANKENSTEIN; these commercial publications kept our interest in fantasy cinema going during the cold years and provided, on occasion, some worthwhile coverage and criticism. 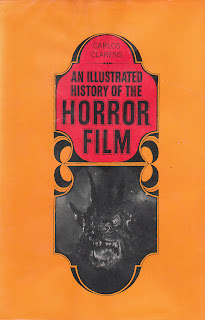 But it wasn’t until 1967 and Carlos Clarens’ AN ILLUSTRATED HISTORY OF THE HORROR FILMS that everything in this specialized field seemed to evolve.  This was the first honest-to-God BOOK about my favorite, mostly mistreated movie genre, putting the entire horror-science fiction-fantasy thing in perspective with intelligence and taste, while legitimatizing “cinefantastique” as a popular art form.  So there I was, sitting on the floor with my 19” portable b/w TV on the rolling cart behind me, nose buried in Clarens’ groundbreaking work (a hardcover edition, purchased at 34th street’s Bookmasters), held by his smart words and cool photos.  And sure enough, there was that life-changing statement staring right at me, in the foreword on page xv: “This rapport between spectator and spectacle is nonexistent in viewing television and, not gainsaying the relative excellence of THE OUTER LIMITS, THE ELEVENTH HOUR, or THE TWILIGHT ZONE, for this reason the mapping of that already considerable territory belongs elsewhere.”

Somehow, in some way, I knew then and there that I was destined to become “the mapper.”

In my late teens and early twenties, I wrote quite a bit for magazines, newspapers, fanzines, whatever venue happened to be available.  One of my regular haunts was THE MONSTER TIMES, a bi-weekly tabloid published by Brill and Waldstein, who had designed FM in its later years.  My first job for TMT was impersonating the Creature from the Black Lagoon in a fictional “autobiography” for their Issue #6 cover story.  When STAR TREK’s syndicated revival hit big, I proposed a “special TV sci-fi issue” that would enable them to jump on the TREK bandwagon without paying a cent to Paramount, since other shows would be overviewed as well.  First and foremost in my thoughts was THE OUTER LIMITS, which I felt was ready for a major pop cultural re-evaluation, the show being a darker, “thinking man’s” ST – and with outrageously photogenic creatures that appealed to profit-minded publishers.  “Yeah!  Yeah!  Space monsters!” I can remember Larry Brill wailing.  Yep, that’s what they were.  And they sure helped me sell a number of OL articles back in the day.


So, a rough – VERY rough – prototype of FANTASTIC TELEVISION was born in 1973: 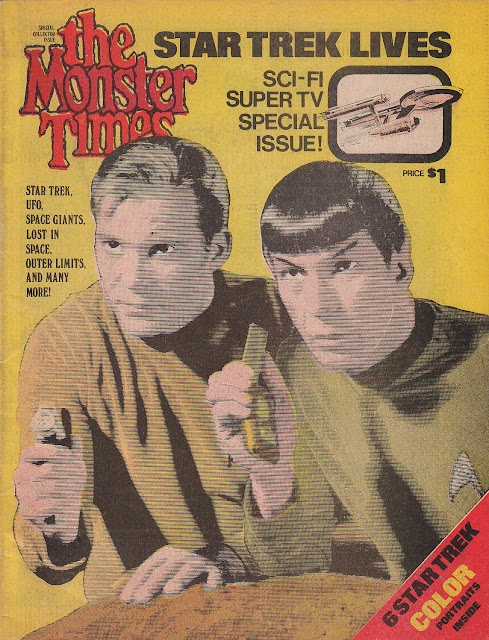 A few years later I used the above publication to convince Crown I could deliver a quality book on the same subject.  I called it FANTASTIC TELEVISION, which was an outgrowth of an earlier title I’d been toying with, THE FANTASTIC ON TELEVISION.  Crown was also anxious to profit from STAR TREK’s syndie resurgence, and that photograph/artifact collection of mine was pretty darned impressive.  So, after a meeting arranged by my great friend Len Brown (who had just co-edited a Maxfield Parrish poster book for Harmony), we quickly made a deal.  Eureka!  Then again, as that tired old cliché goes, watch out what you wish for…


In no time, I became totally overwhelmed by this massive, seemingly endless project.  Dealing with all the photos and a dozen or essays was bad enough, but those lousy episode guides!  It was murder getting all that information, a hell of my own making.  Sometimes I’d have to travel to obscure cities to pull credits off the screen during local telecasts.  Harmony eventually brought Paul H. Schulman in to help me get the project finished – Paul was a psychiatrist-in-training, which puts the entire experience in perspective.  I remember getting very, very annoyed when the promised color section was pulled at the last minute, and I was never nuts about designer Ken Sansone’s nonstop silhouetting.  Still, my original concept for the book was pretty much followed: I wanted a SCREEN WORLD-like approach to the episode listings, with at least three small photos within TV tube shapes across the upper portion of the page.  “Fine Tuning,” “The Full Picture,” the TV-movies and Kid Stuff sections, all were almost exactly as I planned them in a rough prototype I submitted on Day One. 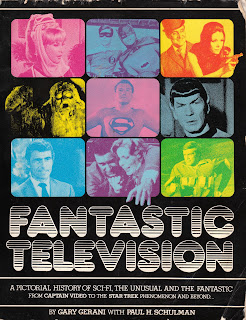 Ultimately, FANTASTIC TELEVISION fared well for me at the bookstores and with most mainstream critics.  It did, of course, have the built-in advantage of being the first tome on this colorful subject, which at least made it novel.  Guess I’ll always be touched when a fan tells me how much he enjoyed tearing through a dog-eared copy way back when.  Lord, that’s exactly how I felt about Clarens’ book: a very special, uniquely personal relationship that’s kind of hard to explain.  Guess FT was mostly a case of me saying, “Stand up and be counted, true believers.  We love these fantastic shows, and they’ve been ignored and misjudged for far too long.  Let’s REVEL in all aspects of them, together!”
The book bounced around for a number of years, then resurfaced in England during the early ‘90s with this fanciful cover (front and back).  Pretty wild. 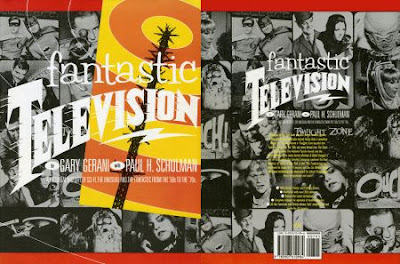 Will FANTASTIC TELEVISION ever return?  A few years ago I would have said, “no way!,” but now…  My publishing company Fantastic Press (I’m partnered with IDW) was actually created to capture the original FT essence, but with a 21st Century edge, providing a series of brand new trade paperbacks dealing with films, television, and the popular arts.  Perhaps, coming full circle, I’ll re-visit the very specific genre that got me started in the book business 35 years ago.  TOP 100 FANTASTIC TELEVISION SHOWS?  Why the hell not!
Posted by Peter Enfantino at 8:00 AM